Review: You're the Chef series from Lerner

I love to cook, and the kids love to help, so I was very excited to see his new series from Lerner, written by Jennifer Larson, photographed by Brie Cohen, and tested by Larson's children. I wanted to test it with my own children, however, and life kept getting in the way, so it wasn't until this weekend that we were able to try things out.
S. was first, choosing a lunch meal from:

978-076-316-6355
S. decided to make the dish featured in the cover photo, the Tortilla Tower.
The first few steps required chopping and shredding, something she hasn't done before. I avoided some of that, and used up some things I had sitting around, by using pre-shredded carrots: 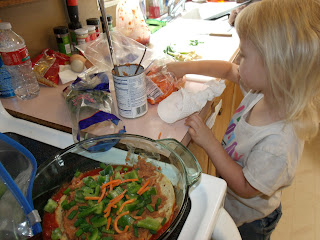 and green bell peppers I had frozen in strips - S. was easily able to break them into small pieces.


I sliced the green onions, and she sprinkled them on. 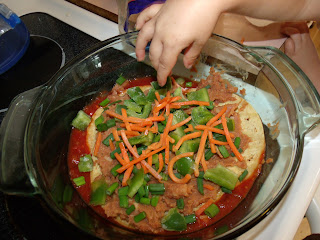 The cheese was also pre-shredded, so it was all very fast and easy to assemble, and she felt like she was doing all of it.
While it was baking, I noticed the sliced tomatoes that also needed to be used up, and we decided we could sprinkle those on top when it was done. I chopped some, and let her do two slices, so she did get to handle the knife after all. 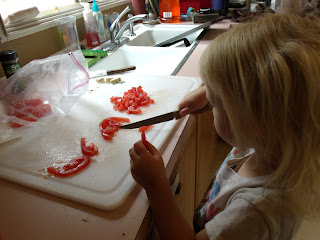 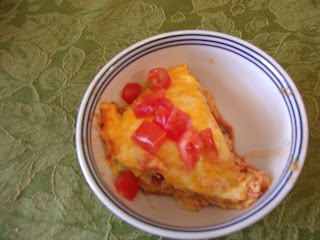 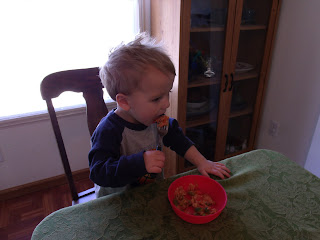 Everyone enjoyed the meal, and the steps were easy for her to follow, with the above mentioned modifications.
For supper, C. decided on the cover dish from his book, too:

978-076-136-6416
Now, I make a mean mac 'n cheese, mostly following The Pioneer Woman's recipe. It's hard for a cook to allow changes to a favorite recipe, but for the sake of education and review purposes, I made allowances.
Since he is older, he was able to do most of it by himself. This was fine, until the milk mixture boiled over (Mommy wasn't watching). No damage other than a messy burner, but that spooked him. I had a hard time getting him back to the stove to stir again, even after the heat was turned off!
Sprinkling the bread crumbs on was a little less threatening. 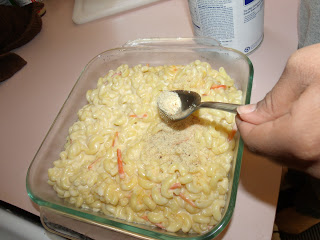 And, eating it was no problem at all!


Both of these recipes included shredded carrots, which is an easy way to add a vegetable. It didn't really change the taste, but the kids didn't like the crunch - too different from what they are used to. The adults liked it just fine. This had a milder taste than the recipe I use, but was still good - Daddy and C. both had two helpings!
I liked that the recipes were so easy to adapt to different ages. A more independent reader could be a more independent cook, using the clear lists of ingredients and supplies to get everything out himself. There are great tips and basic instructions that would even be good for adults newly on their own - as one from the mandatory Home Ec. generation, I still find it surprising when people don't know the difference between dry and liquid measuring (not that I actually measure anything myself.)
The recipes lean towards the healthy side, but are still simple and tasty - something kids will actually eat! Most important for any cookbook, the pictures (both photographs and illustrations) show most of the steps, as well as the finished product. The photos are bright, and laid out nicely, while the illustrations serve to clarify rather than clutter.
All in all, a very well-put-together series, perfect for the intended audience. Recommended for elementary and middle school libraries, as well as home. This set would make an excellent gift for budding chefs!
For more wonderful books, check out today's Nonfiction Monday round-up, at A Wrung Sponge.