We live on just under three acres. Not a huge amoount of property, but somehow I had never noticed this: what appears to be a chimney poking up out of the ground at the top of a hill! In my defense, this area is covered with undergrowth and blocked by trees much of the year... 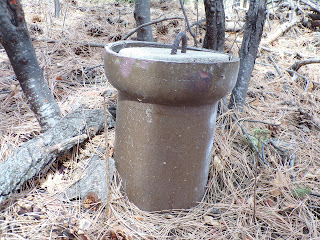 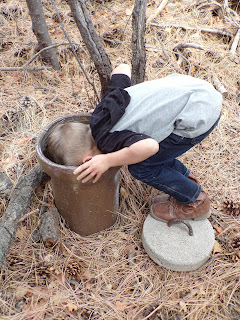 Obviously, this is the perfect fun story starter! (Unless you have seen or read "It", in which case it would be a different kind of story.) Here is what the kids came up with.
Shane
One day, I went for a walk with Mom. We saw a chimney in the ground. I looked in and I leaned too far and I fell down, down, down!
When I landed, I saw a whole bunch of kittens that tried to eat me. I climbed the chimney and the followed me. I went up our chimney and then they tried to follow me but they could not because my Dad started a fire in the fireplace. The end.
(Okay, maybe Shane was thinking of It after all.)
Logan

At the top of the hill next to our garden is a chimney. Inside of the chimney are some little gremlins.

Whenever the gremlins get turned to slime they reappear there in the little gremlin prison. Then the little troll guards yell, “We got another one!”

Then the troll king comes and says, “Good job, but there are still twenty more. Once we get them we will release them at night time so they can destroy more stuff. Then when they touch light they will come back here and we will do it all over again.”

Sheridan
Up on a hill by our house, there is a chimney that leads down to a house. The house is buried, and only the chimney is above ground.
In the little house that is underground, there is a family of little dwarves. They have a tunnel that leads to our pantry so they can have food. They probably don't think we know about the hole, because they covered it up with a wooden plank, but we know it's there because every time we step there it wobbles, and it isn't like the other boards.
So, yeah...we are neighbors with dwarves who have a secret tunnel to steal food from our pantry. But we are fine with it because we have plenty, and it's not like the dwarves can just go to Walmart and buy food!! So we let them have some of the food.