Review: Trouble is a Friend of Mine, by Stephanie Tromly

Sherlock meets Veronica Mars meets Ferris Bueller's Day Off in this romance where the leading man is decidedly unromantic, and crime novel where catching the crook isn't the only hook.

Of course Zoe Webster didn't like Philip Digby when she first met him. No one does! He's rude and he treats her like a book he's already read and knows the ending to. But Zoe is new in town and her options for friends are . . . limited. And before she knows it, Digby—annoying, brilliant, and somehow attractive?—has dragged her into a series of hilarious and dangerous situations all related to the investigation of a missing local teen girl. When it comes to Digby, Zoe just can't say no. But is Digby's manic quest really worth all the trouble he's getting Zoe into?

I got about three chapters in before I realized, I know this kid. He was one of my patrons many years back, his name wasn't Digby, and he wasn't old enough to make any little girl's hearts stutter yet. But he was amazingly bright, confident enough to barrel through all sorts of trouble, and just so hard to stay mad at. Even when he consistently broke through every guard our tech people put on the computer, AND I busted him drinking MY Cokes from the staff refrigerator. I remember asking him once to please use his powers for good, not for evil.

Zoe is a likeable character, well-fleshed-out enough that she isn't just a foil for Digby's escapades. I found myself feeling things along with her even though she isn't much like me, which to me always speaks well for the writing. Henry is a bit more two-dimensional (don't worry, you'll meet Henry fairly soon), but his presence does give the story a little more depth, in addition to providing Zoe (and us) with back story.

Digby, though. Digby is definitely the star of the show, and he sweeps the reader along just as he does the people around him. In fact, Tromly owes me some laundry time, because I spent the entireity of the kids' naps yesterday hiding in the kitchen so I could finish reading.

Now, once I was finished, the analytical blogger in me started questioning the plausibility of the situations, especially the whole final explosives thing (no spoiler, it starts with that). And then there was Digby's big secret! But then the reader in me punched the blogger in the face and told her to shut up, we enjoyed the whole ride, and Digby's secret was hiLARious, and we didn't want to hear anyone poking holes in it. Plus, this morning my radio DJs were discussing a CHP helicopter chasing an escaped unicorn, so who am I to question what could really happen?

Part of me hopes for a sequel (I want more Digby!) but the other part fears seeing a good thing ruined. Either way, this is definitely a must-have for any young adult collection.
Posted by Ami at 9:44 AM No comments:

Email ThisBlogThis!Share to TwitterShare to FacebookShare to Pinterest
Labels: Book Reviews, Stephanie Tromly, Trouble is a Friend of Mine

A friend gave us several cuts of bear a few months back, and since I have never cooked it before, I hit the internet. What I mostly found were a lot of really dumb comments about cavemen, gamey meat, tough meat, etc. - from people who 'heard' about it, or were guessing. Seriously? It's a meat, guys, just like cow or pig.

I made the bear roast for Thanksgiving (in addition to turkey), and it was so good there wasn't much left! The taste of bear meat supposedly depends on what it eats. This bear lived in southern NM, and probably ate both meat and plants. It wasn't gamey at all - and we have eaten several cuts of it now. The meat itself does not have a strong flavor, and isn't tough. I have done the roasts in a slow cooker, but we cooked backstrap in the oven (stuffed with cheese and peppers, wrapped in bacon...yum!), and that wasn't tough either. The only thing I wasn't impressed with was the bear sausage, which had little flavor - the next time I cook it, I will probably add some of the same seasonings as I do to the roasts, and simmer it for a while.

Here is the basic recipe I followed for the roast, although I don't use exact measurements:

Directions:
1. Melt butter in frying pan and sear roast on all sides.
2. Cut slits all over and stick garlic cloves in (or you can also just sprinkle with minced garlic from a jar, if you are lazy like I was the second time)
3. Place in slow cooker and pour beer over top.
4. Sprinkle with other ingredients.
5. Cook on high for about two hours, then on low 4-5 hours more. 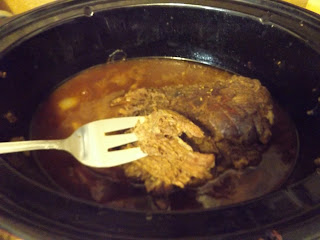 That's it! Basically how you might cook a beef roast, although you want to think of it like pork in terms of done-ness (like pork, bear meat can have trichinellosis). It smells SO GOOD, you will be tempted to taste early, just make sure the internal temp is 160 degrees (as per CDC). As you can see, it is falling apart in the end, and the flavor is amazing (as per local critics!) 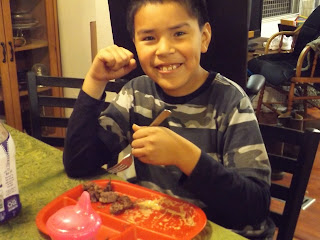 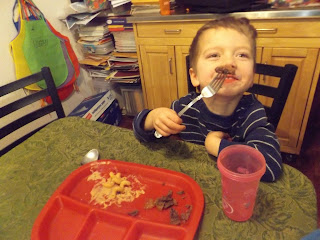 Hours from home, stopping for a bathroom break at a gas station, Logan spots a familiar-looking box on the shelves. "Mommy! I figured out where Grandma bought my cornbread!"

Logan saw this statue in Artesia: 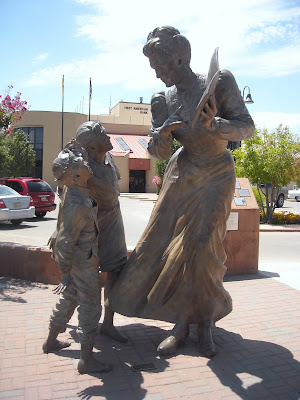 and said excitedly, "Mommy, I know why they made that statue!" Expecting something about the importance of librarians, I asked, "Why?" Logan: "because she was reading a book and they shot her!" 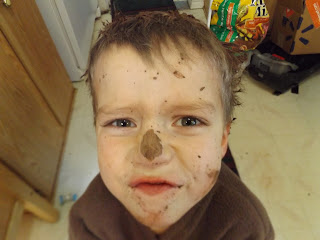 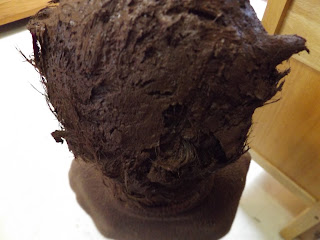 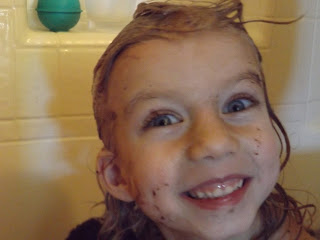 Shane just walked by me saying, "Bye-bye! Love you!"
'Bout time he got a job.