And So It Begins

My posts have been few and far between lately. We are down about half our salaried people at work, with one of the remaining three about to go on medical leave for a month. Some nights I just come home and collapse! I was also without my laptop for a while, as whenever I turned it on, it would pop up with 800 messages telling me a) I no longer had a C drive, and b) the world was about to end. M. let me borrow her little netbook, but it just wasn't the same.

What internet time I did have was devoted to helping Daddy get his own blog up and running. Because none of us has enough going on, and because it's always fun to hear people make up crazy things about you, he has decided to run for County Commissioner. He may have other reasons besides those, but you can find them on his blog.. Anything I post here will be more about the family's experiences as the campaign goes on.

Today was the first 'family appearance', at the local Republican Party Convention. Kids were scrubbed and dressed - and lectured! Yes, some of our younger friends would be there, but this was NOT a running-around type of party. S. was informed on the way in the door that there would be cookies. "There are COOKIES??!!" I think everyone in a six block radius got that information. They were all very good, playing in the back of the room; or, in L's case, staring at people intently (I think his strategy is to make them so unnerved they agree to vote any way he says, just PLEASE STOP STARING AT ME!!!)

M. had one interesting conversation, when Daddy's opponent approached her and asked who she was there with. "My Dad, Mike Jones." "Oh," he replied conversationally, "Is he running for something?"

We had hoped to stay long enough to hear Daddy's speech, but as it neared lunchtime, toddler patience wore thin. We played outside with our friends for a bit, then gave up and headed out for errands and home. S and L took a 30-second nap, while C. and I built a hideout around a fallen tree*. Talking with old friends and meeting some new people this morning was fun, but it was also good to have some kid time. Here's hoping we can keep that balance! 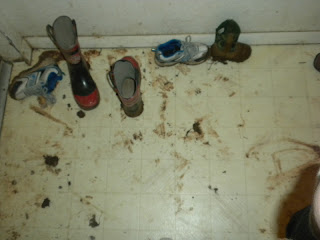 *Remember how I said the kids were scrubbed and dressed earlier? Never mind.
Posted by Ami at 6:47 PM No comments:

A Day at Home with S. - in sound bites

From my bedroom - from my bed, to be specific - "Mommy, I got the powder for you!" Yep, pretty much what you are picturing right now.

And, I had to come back to add:
Mommy: "S., would you throw this away for me, please?"
S. - casts about wildly, spots the balloon string and grabs it, "No, I holding this with both hands."
Posted by Ami at 4:02 PM 1 comment:

I Love This Little Girl! 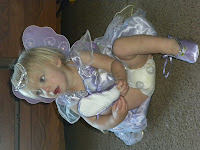 This morning, as we were headed out to the van, S. stopped suddenly and turned her little face to the sky. Then she climbed into the van as if this were a normal part of her morning routine. I guess even balls of fiery gasses need an occasional affirmation.
Posted by Ami at 6:23 PM 1 comment: 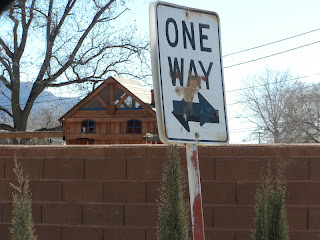 I found this a tiny bit confusing. Taken this morning on my lunch break.
Posted by Ami at 9:19 PM No comments:

A few weeks ago, two ladies from the Early Childhood Directors Association of Southern New Mexico approached me. Their group is disbanding, and they had some money left in their treasury. Could they spend it on the Children's Room?
Of course, that took about thirty seconds to answer, and then another hour to sort through some of the educational toys I have been drooling over online. I sent them my wish list...and they ordered all of it! Things started arriving Saturday, starting with the play table... 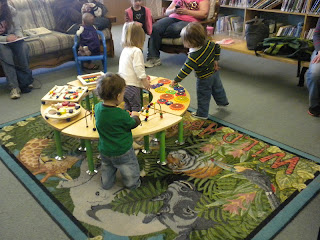 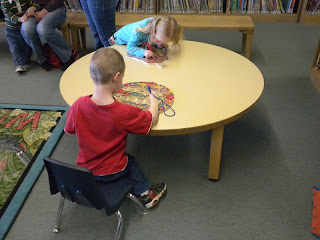 ...then, Monday night, the sand table. 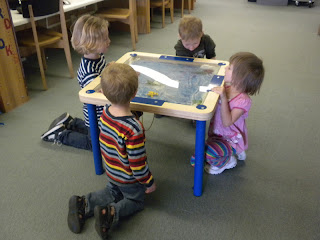 As you can see, they have been very well received! Normally when I announce it's time for story time, the kids drop whatever they are doing to head into the multipurpose room. Yesterday, their parents had to coax them away from the toys, with promises they could come back out and play again after stories. It helped that we were doing marble painting - the lure of potential mess perked them right up.
But they still held the parents to their promises. 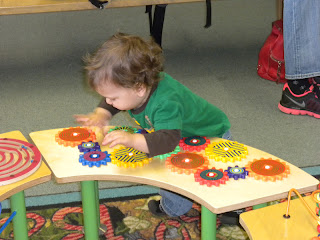 Thank-you so much to the ladies for thinking of us! If you are local, stop by and check everything out.
Posted by Ami at 11:14 AM 1 comment:

Email ThisBlogThis!Share to TwitterShare to FacebookShare to Pinterest
Labels: At the Library, library toys

So, remember way back, when I showed a picture of the tadpole we bought back in March, and complained that it wasn't growing into a frog yet? And everyone told me I should be patient, it could take up to 9 months? 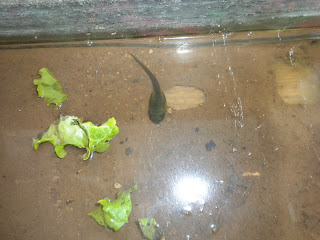 Oh, yeah! Never-before-published poems and art from the late Shel Silverstein. Usually that means "poems we didn't think were good enough to publish until said author died and we figured we could make money anyways", but these are all on par with everything else he put out. I have several marked to copy down already (M., page 35 is for you!) Don't worry, we got two copies, so I can take one home and still leave one here for the first lucky patron.

Cute concept and pictures, but the rhythm is off, making it a bit jarring to read. I'm sure it will be popular, though - animals and underwear, after all!

Nothing wrong with the rhythm and rhyme in this one! We'll definitely be reading this one at some future story time!

Beautiful, both the story and the pictures! The young narrator follows his father through the desert, collecting 'tears' of resin - also called myrrh - from trees, to sell at the marketplace. One day, they find a larger than usual tear. It is purchased by three men buying gifts for a baby...

At first I was annoyed by the number of men depicted - I'm a stickler for accuracy in my historical fiction, even in picture books - but, in an author's note, Park explains that we aren't sure how many there actually were. I am appeased.

Speaking of classy pictures, here we have a kid picking his nose, and people covered in snake excretions. What more could you ask for in a picture book? Fun rhyming text, too. Adding it to the read-alouds.

Rounding out our unintentional zoo theme, the walrus escapes and is chased through this wordless picture book by the zookeeper. Can you help find him? A good one for the very littles.

It can be hard to explain a terrible event in history to young children, but there are sometimes picture books to help. This one chronicles the events before, during, and after Kristallnacht from a cat's point of view. Definitely one to read with your kids.

Along those same lines, this one tells the story of a slave family that escapes - and is found again - after witnessing the beating death of another slave. While "Benno" mostly describes events in a vague way, this one is detailed enough that we decided to stretch the definitions a little and shelve it in nonfiction. Extremely well-written, it would make a great addition to a history lesson at any grade level.

Stop by today and check these out!
Posted by Ami at 12:59 PM No comments: