Daddy and I are both on the local volunteer Fire Department. Daddy has been doing this for a long time, and can be seen on just about every call. I have been doing it for a year and a half, and...I sometimes remember to turn my pager on. I would like to go on more calls, but either a) they happen when I am at work and about to go into a program, or b) they happen when we are home with the kids, and M. is not around to take over for a bit. When there is a fire, it makes a bit more sense to send the person with some actual experience, so generally I stay home.

Sometimes it's pretty quiet. And then there's the past week, when we have had at least a dozen fire and EMS calls. We have been joking that people want to personally say good-bye to the Assistant Chief, who is retiring as of the end of this month. Our Chief of many years is also stepping down, although he will remain on the force.

Mountain folk! We have good news for you! Rather than have an accident or set something on fire, you can just come to the community cookout tomorrow to tell them you appreciate them! You don't even have to bring anything (although desserts would not be turned away). We have approximately a metric TON of food waiting for you, and if you don't come help us eat it, I am going to get very tired of potato salad very quickly.

I have literally been cooking all day, but that's not a complaint at all. I love to cook, and if I can't make it out on calls, at least this way I can feel like I've contributed something useful. Following are recipes for the three main things I made today (you really don't want a step-by-step on slicing onions for burgers, do you?). Tomorrow...or possibly Sunday...I hope to post some pictures of the actual event.

Madeleine is great. She's...well, she's crazy. But, crazy in a make-sure-she's-coming-to-your-party way, not a hide-the-guns-and-prescription-bottles way. And if she is coming to your party, make sure she brings this! Come to think of it, there may be a myriad of things Madeleine makes well, but once everyone tasted this, it became her mandatory contribution. I have taken some liberties, so if yours turns out great, she gets the credit: if it's awful, I'm to blame.

Start with twenty pounds of potatoes, any kind, really. I like to bake the potatoes, rather than boil them, because I think they have better flavor that way. You can do it either way, of course. You can season them now if you like, but I didn't - there is plenty of flavor in the sauce.

You might want to be smarter than me, though, and cube them BEFORE you bake them. And I thought I was being so efficient by putting them on trays in the oven the night before, so I could let them bake while I bathed and got dressed in the morning. 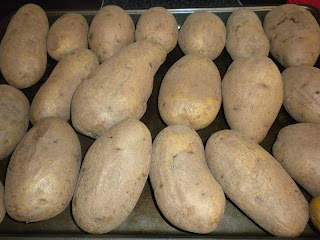 They did, but then I had to wait for them to cool before I could cube them. Oh, well, there were plenty of other things to do. 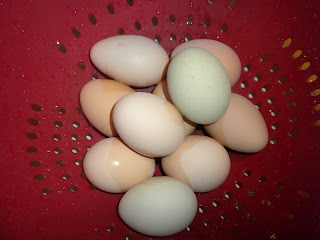 I hard-boiled the eggs (twenty) the night before. Yes, I know there are only ten in the picture, I did two batches. This morning I peeled and chopped them - with help. If I give S. a hard-boiled egg to eat, I get "it's yucky". When she thinks she's getting away with snitching something, though, she'll gobble up hard-boiled-egg pieces as fast as she can. 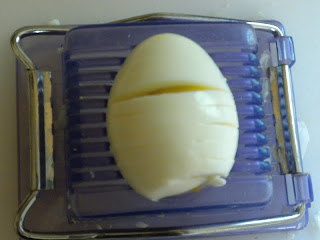 The kids thought this egg slicer was the coolest thing since...well, since sliced eggs. I think this one looks like a mummy, with a little yellow face peeking through. 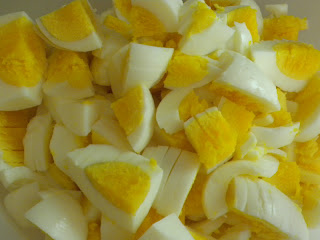 Slice or chop your eggs, and dump them in with the potatoes. I hope you are using a really big bowl, by the way. 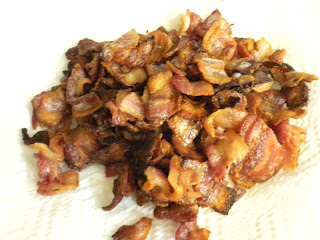 I also cut and then fried up the bacon the night before - about five pounds. I say "about" because, if you have bacon stealers in your family, you may want to cook six, just in case. I do. So I did. Toss the bacon in with the potatoes and eggs, reserving a little to sprinkle on top. 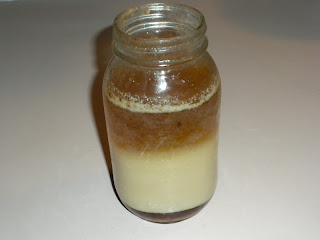 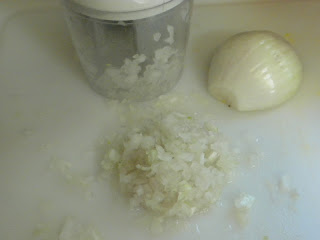 Next, mince up about 5 cups of onions and toss 'em in.

Now for the sauce: 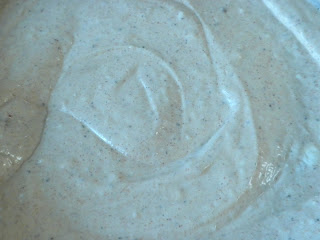 Looks yummy. Do NOT taste test it. It will seem incredibly salty and throw you into a panic, because you don't HAVE another ten cups of mayo to redo this, and Walmart is a half hour away! Trust me. It's all good. Just gently stir it into the potato mix. (You may need to do it in halves - or quarters - depending on the size of your bowls!) 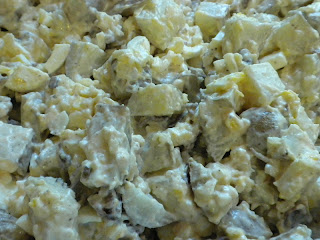 Then, if you are concerned with presentation, transfer it to a cleaner, prettier bowl, and sprinkle the leftover bacon on top. 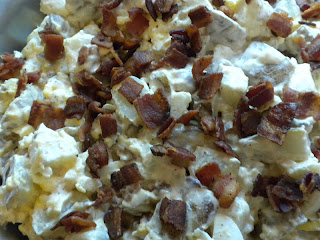 You can try covering it with foil and putting it in the refrigerator, but be aware that your husband is going to come home for lunch at this point and valiantly offer to taste test a large bowl of it. If you are wondering, it met with his approval.

Once the littles were napping, and Daddy was back at work and it was safe to cook bacon again, we moved on to


Step one: Put gloves on.

Step two: No, really. Put gloves on. Don't be one of the millions of us who had to learn the hard way. You don't want to spend the rest of the evening googling ways to make your fingertips stop feeling they are on fire, especially when it hurts to type. And none of the remedies work. Worse, you could be one of those who absentmindedly wipes their eye or scratches their nose. Oh, and definitely take care of bathroom business before you begin.

Step three: Gloves on? Okay, basically you need to cut the tops off of, 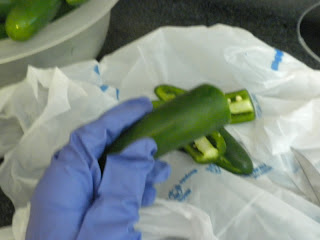 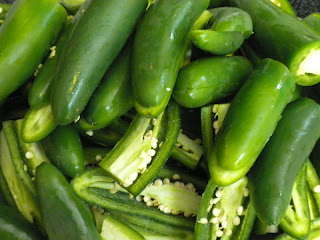 and scrape the seeds out of 75 jalapeno peppers. 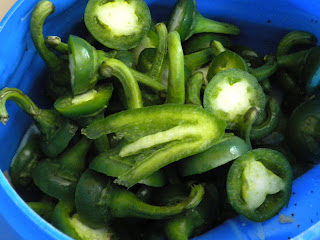 Make sure you save the scraps for the mulch pile!

Then mix five packages of softened cream cheese with about four cups of shredded cheddar cheese - or just about anything else that strikes your fancy. Other cheeses, spices, pimientos, whatever. You can just leave it plain, too. 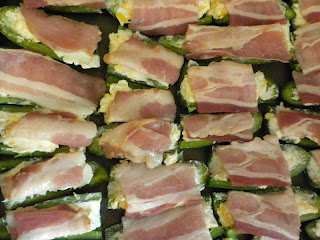 Fill the pepper halves with the cream cheese (you can take the gloves off now), top with a piece of uncooked bacon, and place on a cookie sheet. Set in the broiler, as far away from the heat as you can, on low, and watch them. Take them out when the bacon is cooked, the cheese has bubbled and browned, and the pepprs are starting to blacken here and there: 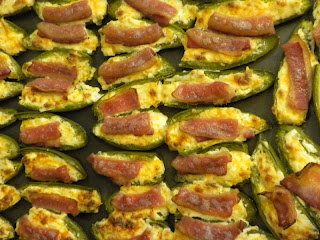 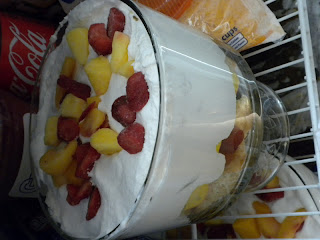 Wow, it's frozen so solid, it doesn't even spill when you tip it sideways. Er.

Then I ate the rest of the whipped cream. Waste not, want not!

So, are you hungry yet? If you're local 'mountain folk', or work in fire and EMS, or with the forest service, or the county, or just want to stop by and tell these two guys "job well done!", then head on over to the main station on Railroad at 5:30PM Saturday night. See you there!