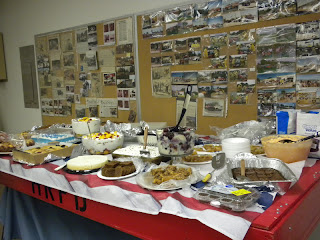 I guess the word got out. How on earth do you choose? (And would whoever made the pecan bars please e-mail me the recipe? Those were FANTASTIC!) 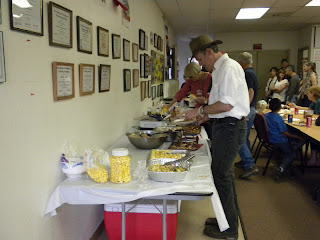 Side dishes - in addition to potato salad and jalapeno poppers, we had Grandma's freezer slaw, chicken, deviled eggs (the two trays were already down to one by the time I snapped this picture), a chicken and vegetable casserole, and beans. And popcorn, which goes with everything. 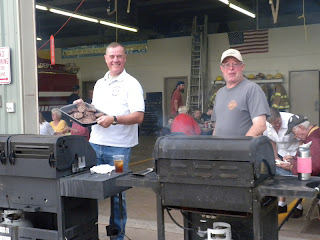 And, of course, the meat!

Which is good, because there were a lot of people! 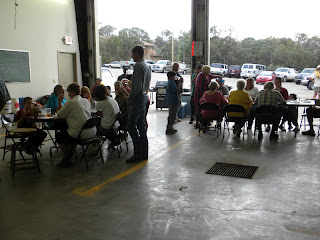 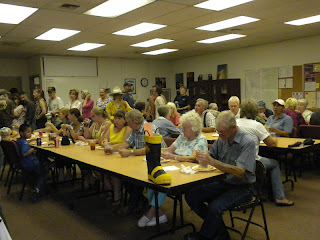 and inside. I'd guess it at about 100 people total. It's a good thing we didn't have any calls, because a lot of people means a lot of cars! Of course, a high percentage were fire vehicles from other departments, so somebody would have been able to respond. On the other hand, that meant that whenever a tone went out over the monitor, half the room would stop talking and cock their heads to listen.

Of course, the main reason we were there (besides the pecan bars) was to thank Mark and Steve, our Chief and Assistant Chief. Mark has stepped down after almost two decades as Chief, although he will stay with the department. He has kept things running smoothly for many years, so we're not about to let him disappear just yet. Steve has been Assistant Chief, as well as one of our EMTs, for a bajillion years as well. If there's one person you can pretty much guarantee will be on any call, it's Steve. He is retired as of last night, and I know it's going to take a long time for people to stop looking around for him on each call!

Paul Quairoli, the county's Emergency Services Director, was on hand to thank them both, and presented Mark with a plaque - after embarrassing him a bit, first. 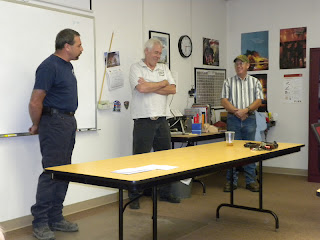 Reportedly, another local department had something for Steve, but we weren't all shown that. Steve, would you care to share? I caught a glimpse of it, and it was...really something!

Our department also had plaques for both Mark and Steve, 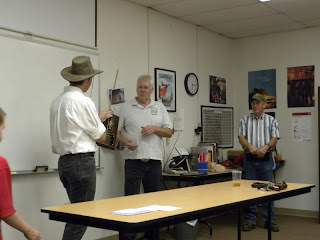 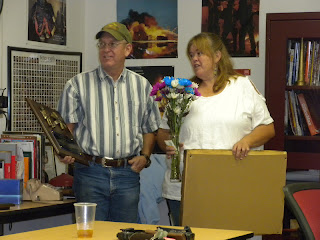 Theresa has been a one-woman auxiliary, is one of the best cooks on the mountain, and has had her sleep interrupted by early morning pages probably more times than she can count over the last twenty-odd years.

It was good to see so many people in the community come out to thank them. It was also nice to just have so many people in the community together in the same place. Mountain folk are pretty friendly, but we are also a bit spread out. Going to the neighbors can mean getting in your car and driving, and the corner store and the post office are the only places to stop and visit. I overheard several comments that we should do this more often.

Everyone seemed to have a great time socializing, 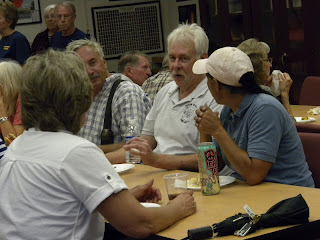 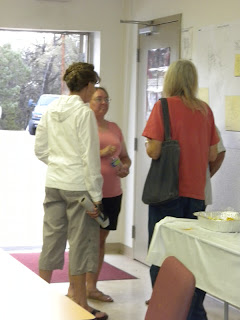 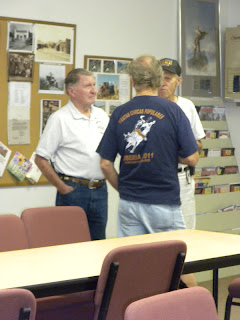 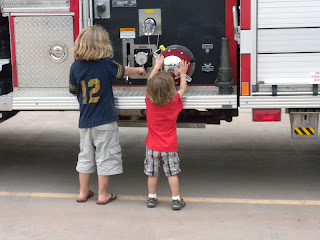 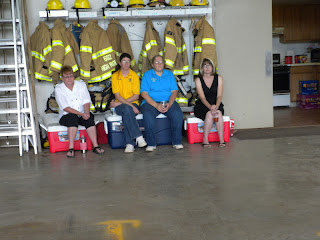 or just sitting. Sometimes, just sitting is just right. It has been a looooooooong week, and it's good to have friends you can just sit in silence with. 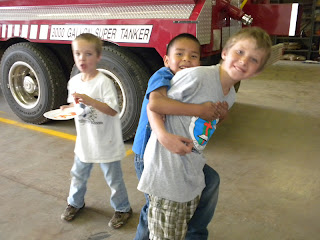 Or, friends you can try to wrestle to the ground.  C. was thrilled to get together with the usual pack of boys, who disappeared for large chunks of time (occasionally followed by S., who considers herself a big kid). I'm sure they weren't doing anything I wouldn't approve of.

Of course, since it isn't a party unless someone goes to the hospital, one of said pack of boys (not pictured) ended up in the ER getting his knee stuck back together. I'm told he's doing fine, now, and will most likely use it to get out of chores for a day or two.


We even got to celebrate a birthday with this beautiful young lady. 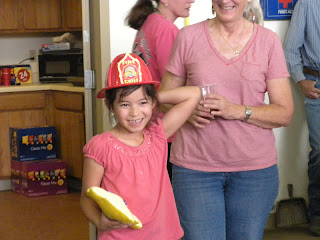 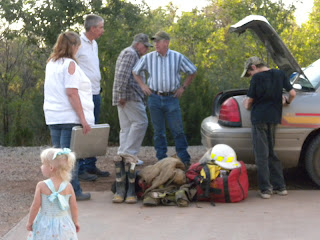 And here we have the outgoing Assistant Chief throwing gear at the new one as fast as he can unload it. We offered to give him a call the next few times the pager goes off, just to help ease the transition, but he didn't seem to think that was necessary.

A lot of people did a lot of work getting everything ready, keeping it going, and cleaning up afterward. If I start naming people, I will forget some*, but everyone pitching in without being asked made it all go very smoothly. People left content in stomach and in spirit.

The kids, of course, were still going strong two and a half hours later. 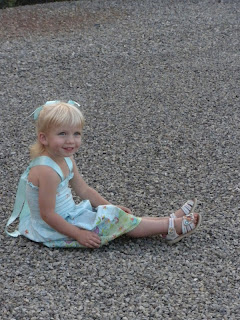 Not tired at all! 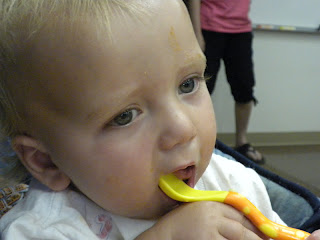 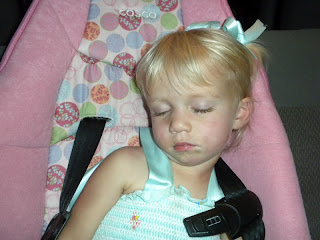 *But notice the pictures that include Crystal zipping back and forth in the background, continually taking care of one thing or another!
Posted by Ami at 12:58 PM