Halfway through! We have about 10% fewer kids signed up right now than at this point last year, but they have read a LOT more books. I ordered t-shirts and prizes based on what we used last year, and we are running out of both! Whoever decided the fiscal year should end in the middle of summer was NOT a children's librarian - all purchasing ended earlier this month, and we can't do anything new until July 2. I have given stacks of orders to the person who does our purchasing. Fortunately she is very organized, and has everything ready to where she can just hit a few buttons on the computer early Monday morning!

The city pool opened last week, so we've seen a slight dip in attendance - but just slight. We're still the only free air-conditioned place to hang out, even if the AC is struggling at times: 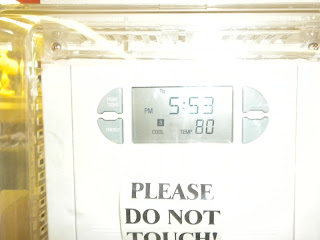 This was in the children's room, just before Teen Cafe. Ick. So, obviously, we needed ice cream! 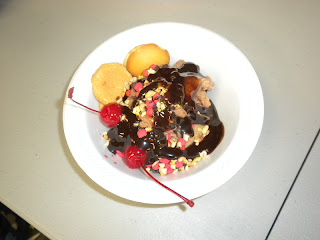 Cherries, nuts, milk, and 'nilla wafers are like bread. A well-balanced meal.

The theme for tonight was pajama party, so I cast about for something to pin a tail on, and came up with a Justin Bieber poster. We tossed around various ideas (pin the mustache, pin the funny nose and glasses, etc.) and finally decided to let the teens do whatever they wanted with him. 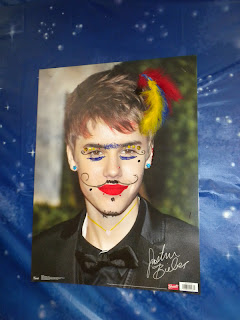 And here we have the Biebs, ready for a night on the town.

We also played Chubby Bunnies, which, it turned out, only one person in the room had ever heard of. What ARE they teaching these kids?! In case you, too, led a deprived childhood: Basically, everyone puts one marshmallow in their mouth, and says, in turn, "chubby bunny". Then everyone puts a second marshmallow in, and says "chubby bunny". And so on. It's funnier than it sounds, I promise. You get disqualified if you eat the marshmallow or if you throw up. One of the guys informed me that some kid somewhere died playing this, so I told them if they choked to death, that would also disqualify them.

The girls, who couldn't stop laughing, all topped out at 4 marshmallows each. Two of the guys lasted to six, then one gave up. 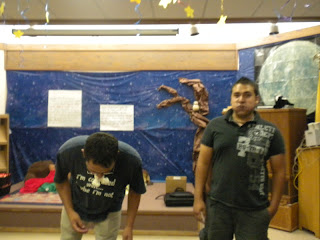 You probably didn't need to see that.


The winner, btw, was still speaking quite clearly. I'll leave it to his sister to make comments as to what that implies.

We also made bubble bath and bath salts. Not the kind that will cause you to chew somebody's face off. That didn't stop the conversation from turning to a) plans for the zombie apocalypse (several teens have quite detailed ones in place), and b) natural causes of a possible zombie plague. We pulled out Scott Westerfeld's Peeps, and read some of the passages about real mind-controlling parasites. See, Teen Cafe does promote literacy skills!

Next week is our movie night, and I had a suggestion sheet up for movie choices. The first one listed was The Princess Bride, and when we discovered someone in the room has made it to the ripe old age of twenty without knowing who Inigo Montoya is, that became the only choice possible. What have these kids been DOING???

A small group tonight, but we had fun. Later in July, we will have our Zombie Apocalypse Survival Training, and I suspect that will be a bigger crowd. M. wanted to bring her knives/bow/guns, and mean old Mommy kept saying no. So she worked up a couple real tears.