Yard sales are one of those weaknesses that aren't necessarily a bad thing. They are a really easy way to stretch the old budget, so when Mom asked if I wanted to go today, I didn't have to debate long. We started off with a dollar here (nice shoes for S.), 50 cents there (cool necklace for M.), then hit the Relay for Life yard sale. There were tons of clothes - several tables full, a hanging rack, boxes, at least three blankets. We had started sorting through, pulling things out for baby L., possible maternity shirts for me, when one of the guys in charge asked, "Who here has the largest vehicle?"

Well, that would be me, but why was he asking? I tentatively raised my hand, and he said, "I will sell you ALL of these clothes for $25."

So, be careful opening the back of my van: 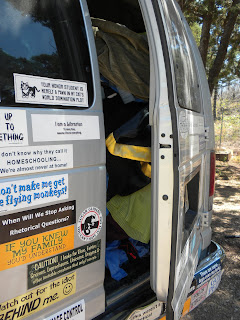 And, C. may need a little help climbing out: 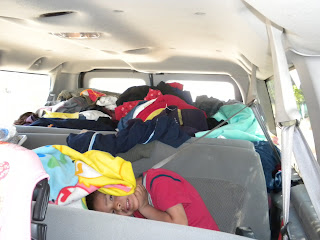 (you can't really see, but the two seats next to him are piled to the top, and the floor is covered up to seat level)
I'll be doing a bit of laundry this weekend. M. was having fun as we drove along, reaching behind her at random and pulling something out. "Hey, this is a cute shirt!"
We had some other good finds - S. fell in love with an inflatable globe as big as she was, $2. C. got cool cammo slippers for taking the puppy out in the morning (and, apparently, to wear 24/7)
We didn't go overboard (there wasn't room to!) There were plenty of things we didn't buy. These little faces were just too cute: 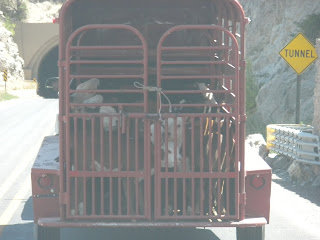 But they wouldn't have fit in the van. 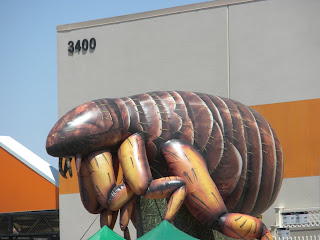 And who doesn't need a giant...flea?
Ah, but then we saw something that reminded us that a friend recently bought C. a wonderful birthday gift, and we need to be prepared to return the favor for her son's next birthday... 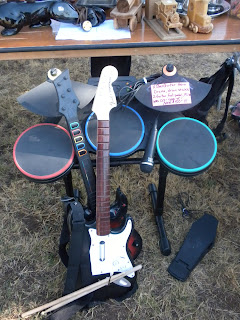 (No, D., we didn't - but you worried for just a second there, didn't you?)
Besides the buying finds, there was of course running into people we haven't seen in a while, including quite a few who didn't know I was pregnant. We spotted one yard sale that wasn't on the list, and stopped to look around. The people brought their puppy out to play, and we remarked that it looked just like Bumble, C's new puppy. Long story short: it was his brother! I don't have a picture, unfortunately, because by that time my camera was buried.

Now to start sorting, and try to also do the other things on my to do list - but hey, cleaning out the van was one of them!
Posted by Ami at 1:29 PM