So, as I posted Monday, Sheridan turned SEVEN this week. Still not quite sure how that happened.

I do not by any means think every child's birthday party needs to have a theme, it just makes it fun for me. I do big themed events at work, and I figure I should put a little of that energy into my own kids' parties! I also don't believe in breaking the bank, though, so these are all ideas you can do on a very limited budget.

When I asked Sheridan a couple months ago what theme she wanted, she settled pretty firmly on the movie Frozen. After my initial thoughts of "Really? Still???" I realized the month following Christmas is the perfect time for a Frozen themed party - all those snowflakes and white tinsel at 75% off! 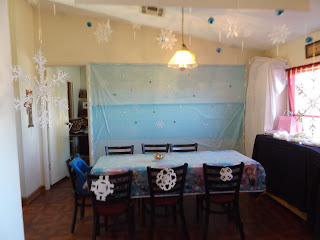 I think I spent a total of $10 on decorations, and mostly on items I can use again next Christmas. Score! I put most of it up while she was at Grandma's, so she came home to a (smallish) winter wonderland. The gift table to the right has white tinsel garland wrapped in white Christmas lights (thanks Grandma!), making it look extra fancy at no cost.

I showed the kids how to make snowflakes a couple weeks ago, and they went to town. 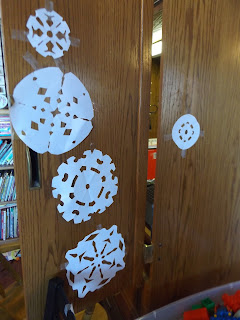 They were EVERYwhere (still are). That was one part of decorating I could let Sheridan do all on her own, satisfying both of our needs to be in control.

Small splurge at the dollar store: 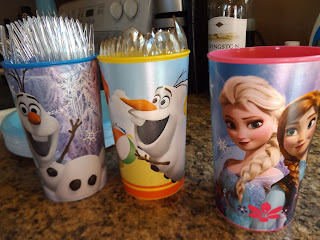 I was going to make a snowball toss game, but ended up just using them as utensil holders.

Our only activity (besides running through the house screaming, which is generally a given) was making snow slime: 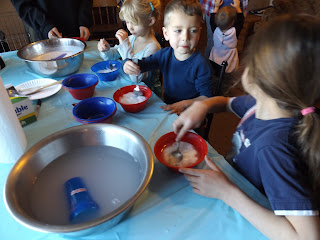 I had one bowl with glue and glitter, and one with water and Borax, and they just had to mix equal parts. Then they got a baggie to take it home in (you're welcome, parents! I'm sure you'll get me back.) 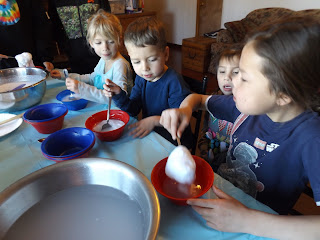 If it's any consolation, I dumped the leftovers in my sink, and the glitter stuck to the stainless steel like you would not believe! Oops.

Instead of goodie bags, I made cocoa packets. 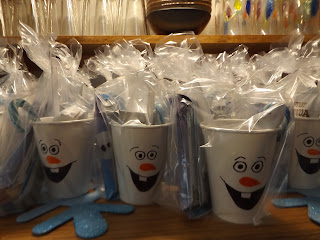 Thank-you, Disney, for making an easy-to-draw character! Each cup had a package of cocoa mix, blue candy cane, Frozen themed cookies for dunking, and a plastic spoon dipped in melted chocolate and silver sprinkles.

I love that all our friends from school seem to be healthy eaters - they'll eat cake, of course, but just as enthusiastically clear out a veggie tray. Since the party was at lunch time, I served the following: 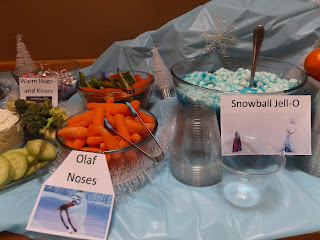 And, of course, the cake! I always bake the cake, and Daddy decorates. Sheridan spent hours looking at all these fancy designs on Pinterest that were way beyond our abilities. Thank-you to my friend Lisanne for sharing this idea: 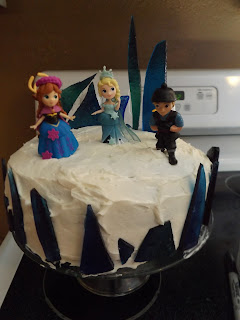 Simple sugar candy shattered after it cooled. The figures were a part of her birthday present from us (ooh, look at all the tiny pieces, that's...great.) I was originally going to make it an ice cream cake - just cut out the middle part and fill it with ice cream (we found a blue and white swirl kind). That...didn't work out. Fortunately, issues happened BEFORE I added the ice cream, so I just had to re-bake an entire cake is all. Stupid Pinterest.

Sheridan had her Elsa dress from Halloween, and Shane was a tiny crazed snowman in his old Olaf costume. There was a flurry of activity and excitement before the guests came... 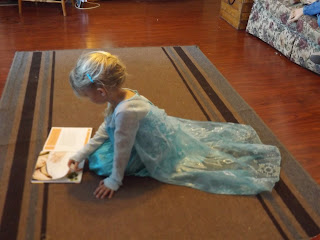 ...or not. That's my girl! Then food, slime, running and screaming, and presents. 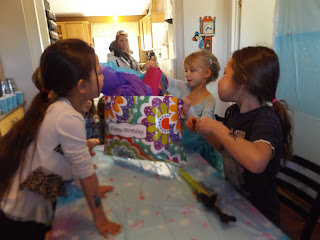 It's hard to say what she liked best, she loved everything she received - and there was a definite theme there, too! 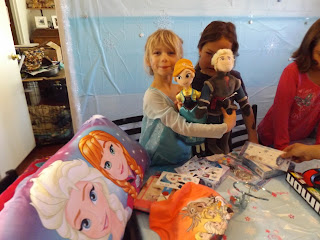 A certain snowman who had his birthday last month did not quite understand why he couldn't open any gifts, 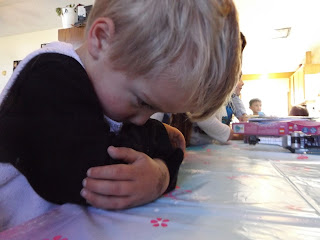 but some more snowball Jell-O helped him get over it.

Thank-you so much to all the friends who came and shared the day with us!