Jones Kids on the Loose: Day One

Well, we made it out and on the road! Of all the days, the kids picked Sunday to sleep in. I finally decided to go ahead and load up the coolers outside - and, of course, then Christopher woke up and walked out to see what I was doing. I told him I thought we might go on a picnic for lunch, and he seemed to buy that...

The surprise worked pretty much as planned! When we told them, Christopher (my dramatic one) dropped everything in his hands, jaw to the floor. Sheridan squealed. Logan had just told daddy not twenty minutes earlier that he wanted to go camping. And Shane...was shoving jelly beans into his mouth as fast as he could, while we were all distracted.

We got all the packing and loading finished, and were on the road by 8:59AM.

At 9:07 AM, we headed back for something we forgot.

And, then we were on the road for real!

Our first stop was on the far side of Las Cruces, for gas. We saw this two-story cattle car, and wondered, how do they get the cattle on the top part? 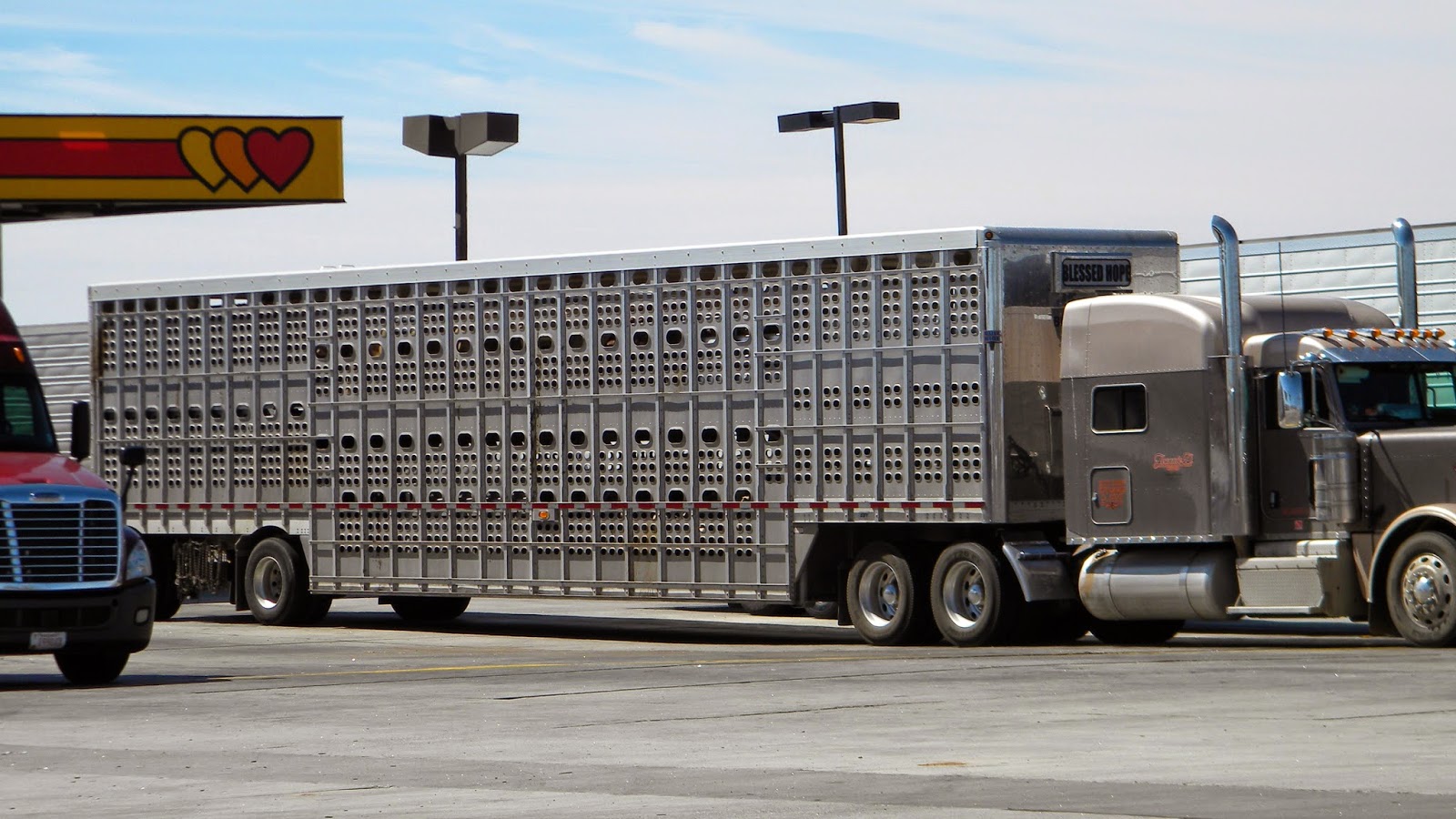 Sheridan thought there must be stairs, Daddy said they just throw them up. We didn't see the driver to ask him. 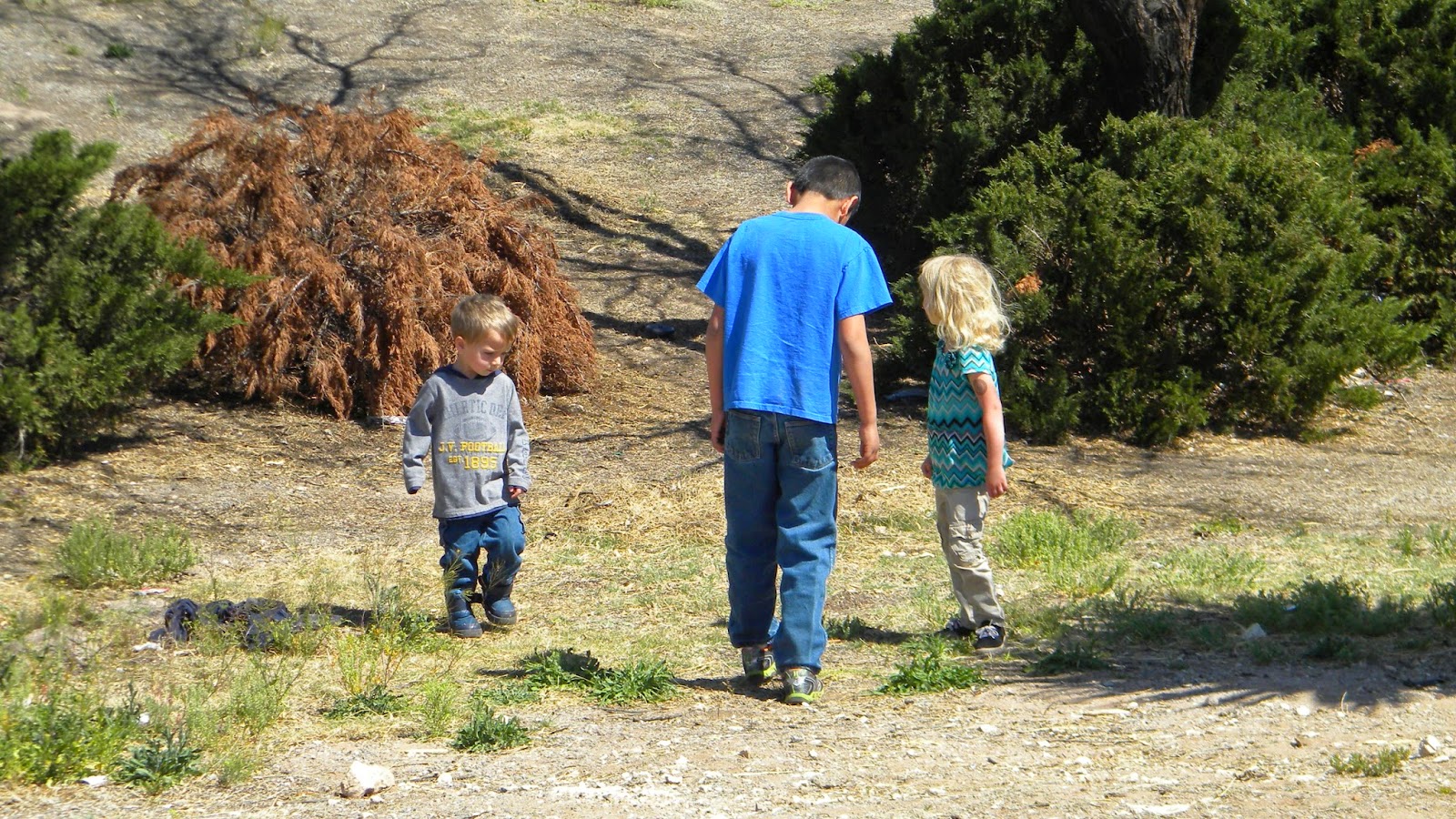 We stretched our legs while Daddy got gas. Shane has only been walking for a month, but he was trucking all over the place! 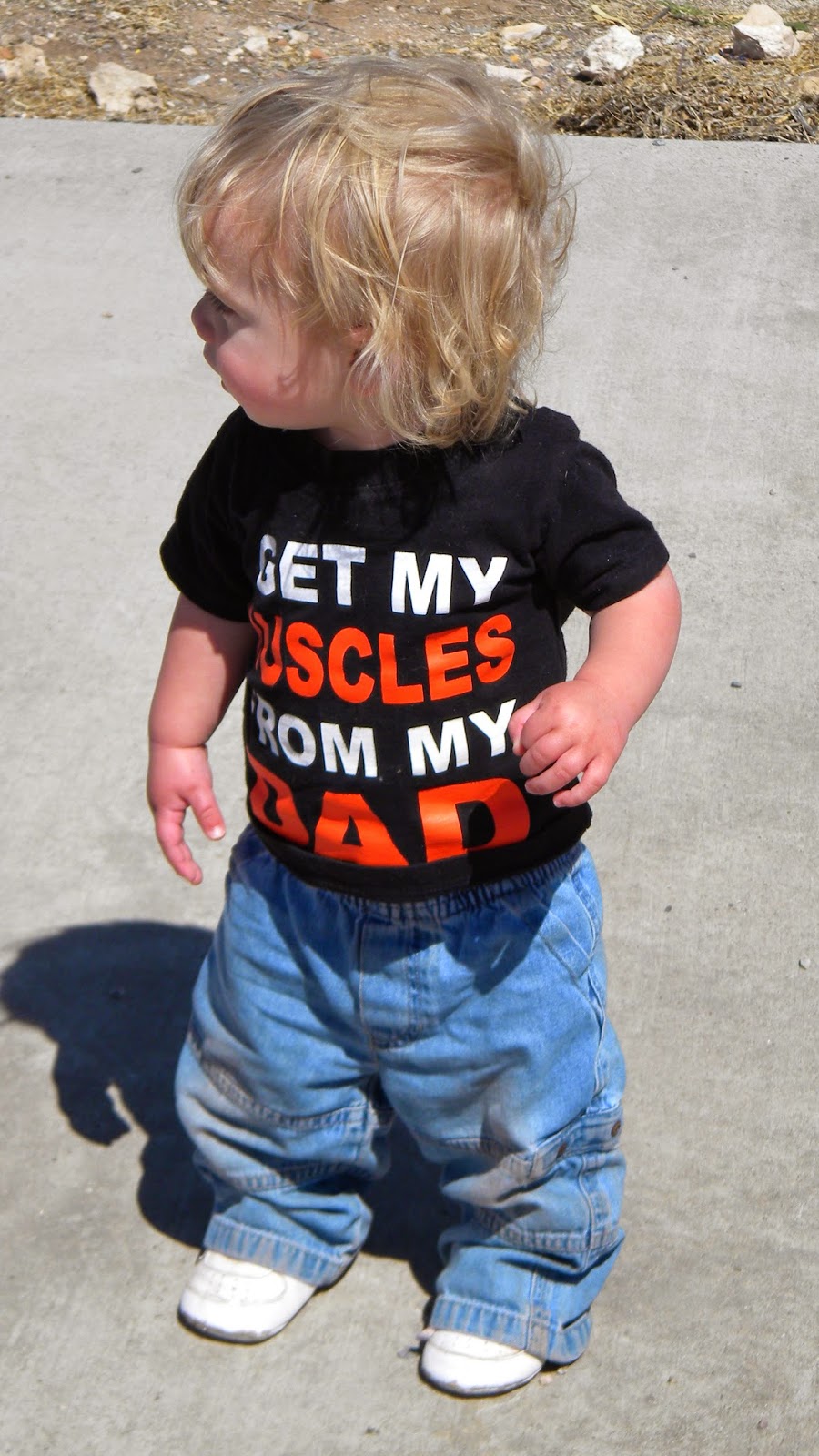 We found a couple items of interest, but didn't keep any. 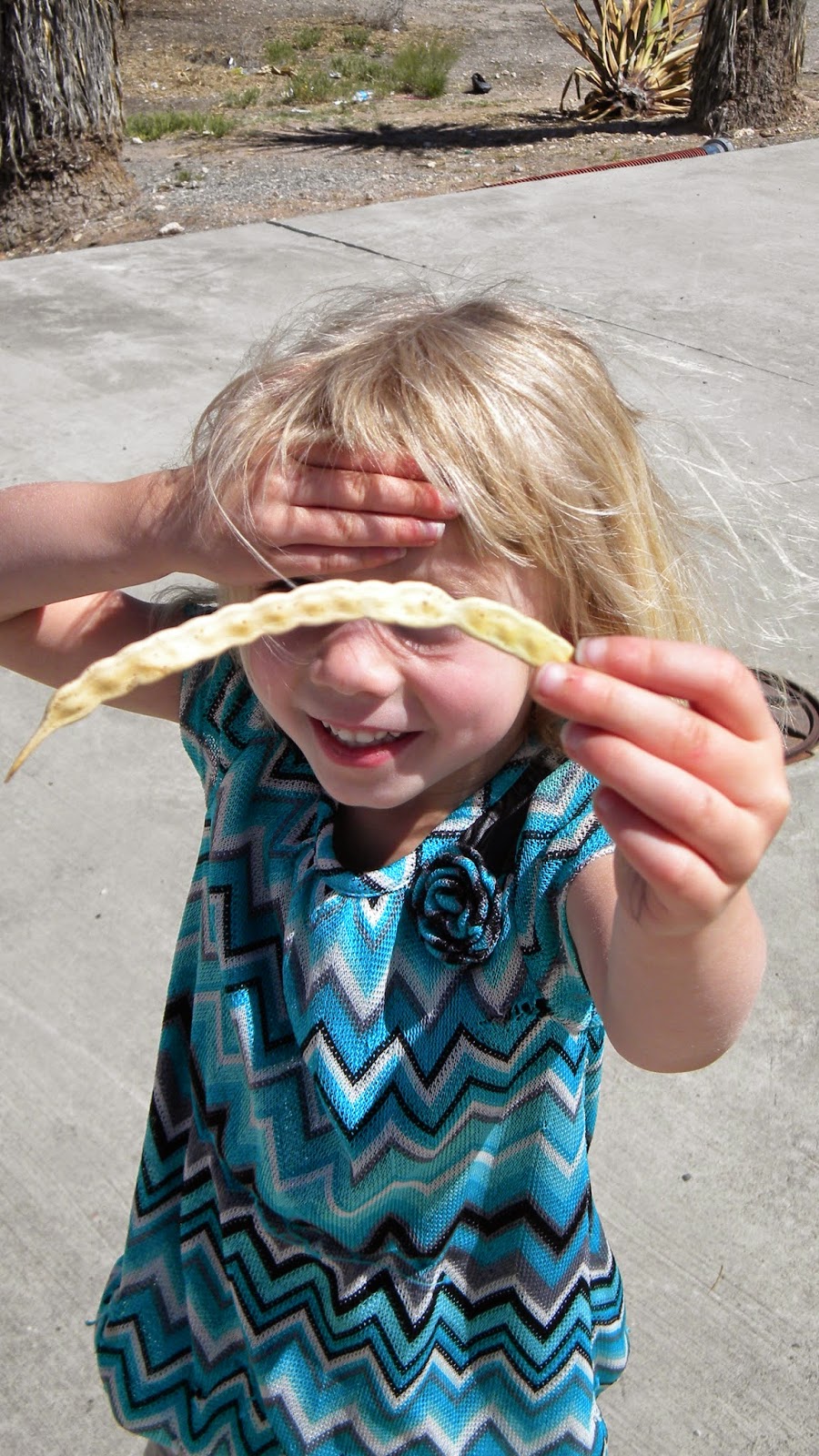 And, of course, a giant pile of dead grass and who knows what else, to climb and roll on. 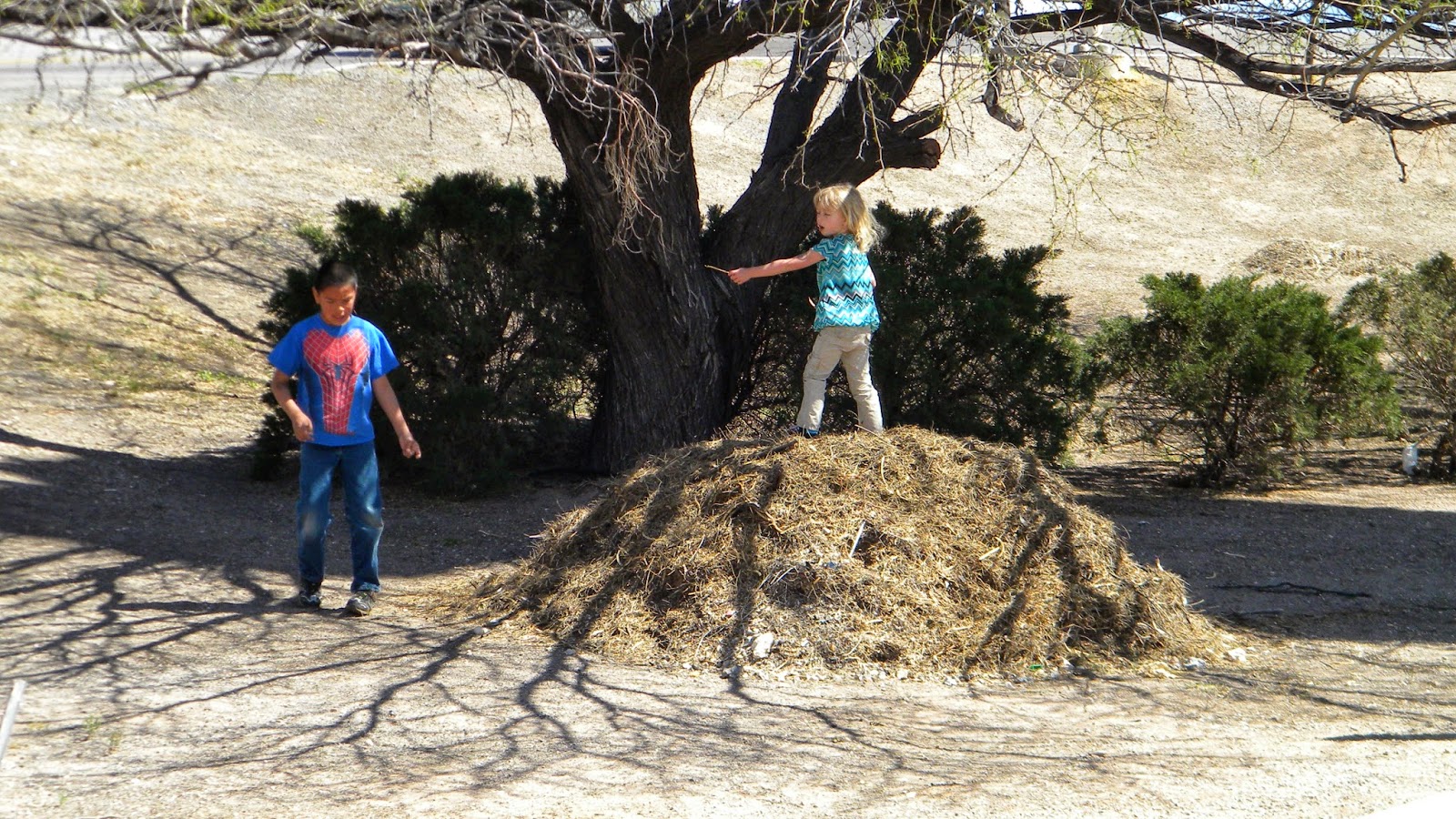 Back on the road! We did NOT stop here. 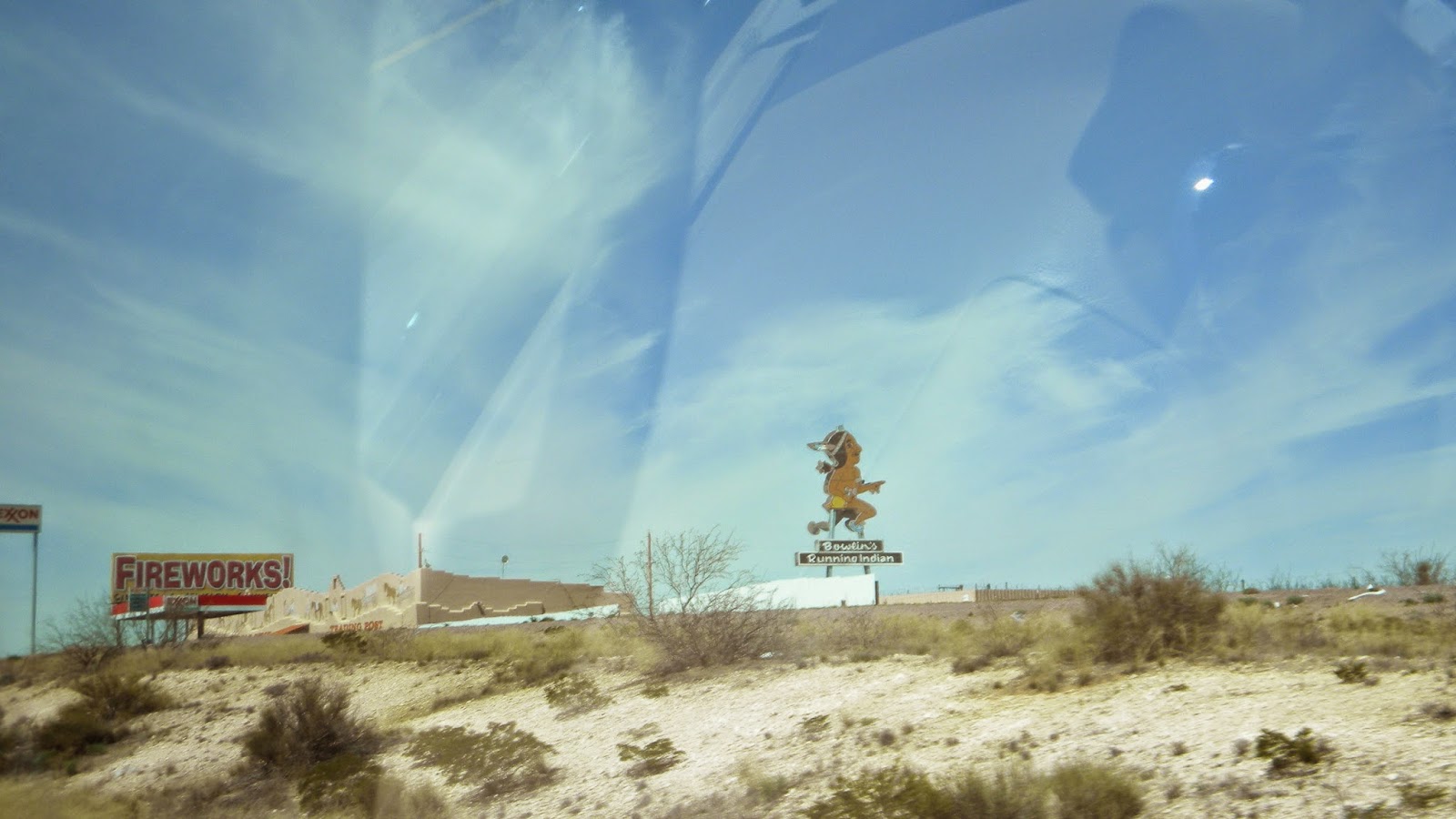 The sign below has something to do with a Native American tribe that owns a very small section of land here - need to look that up later. 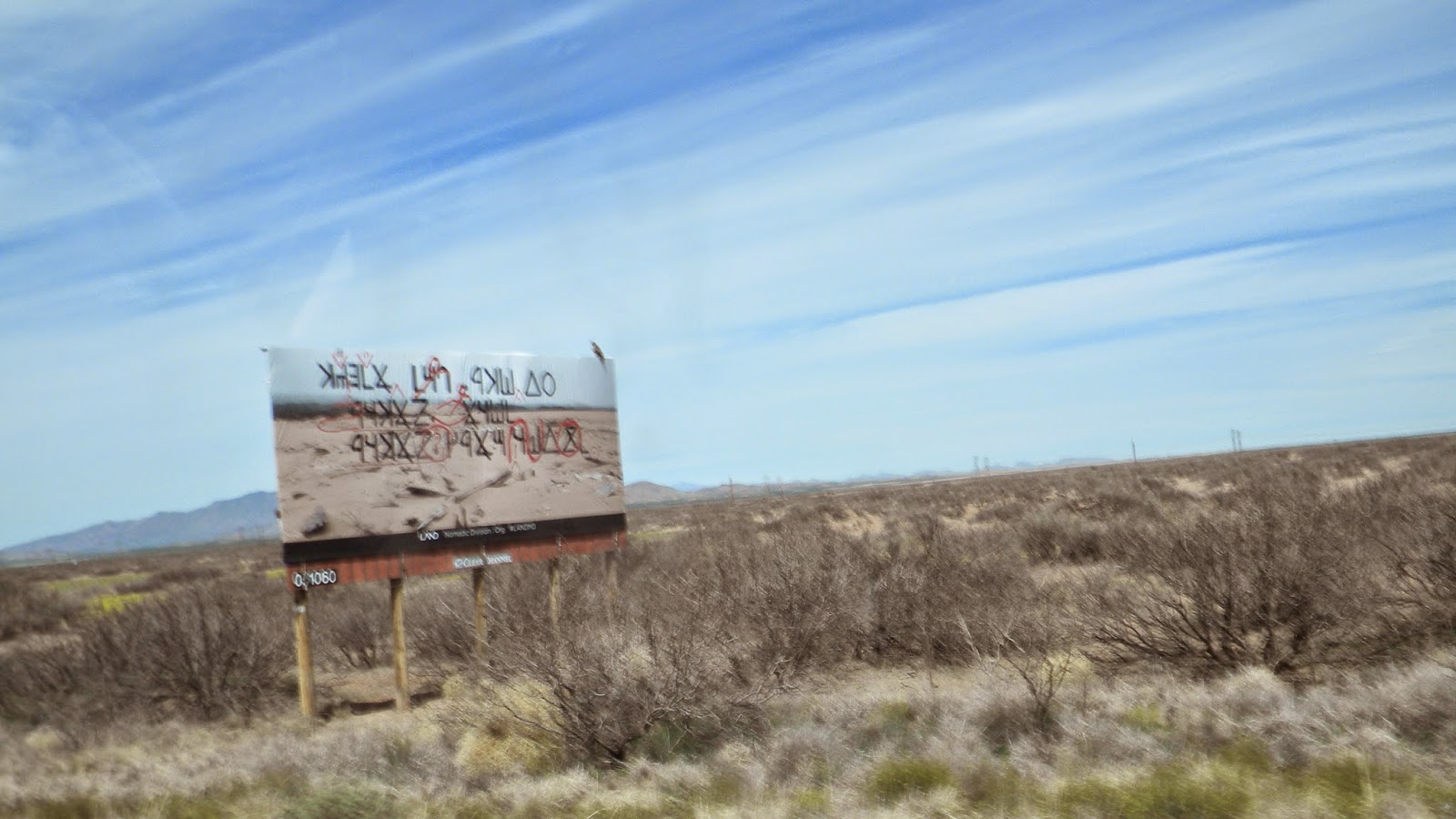 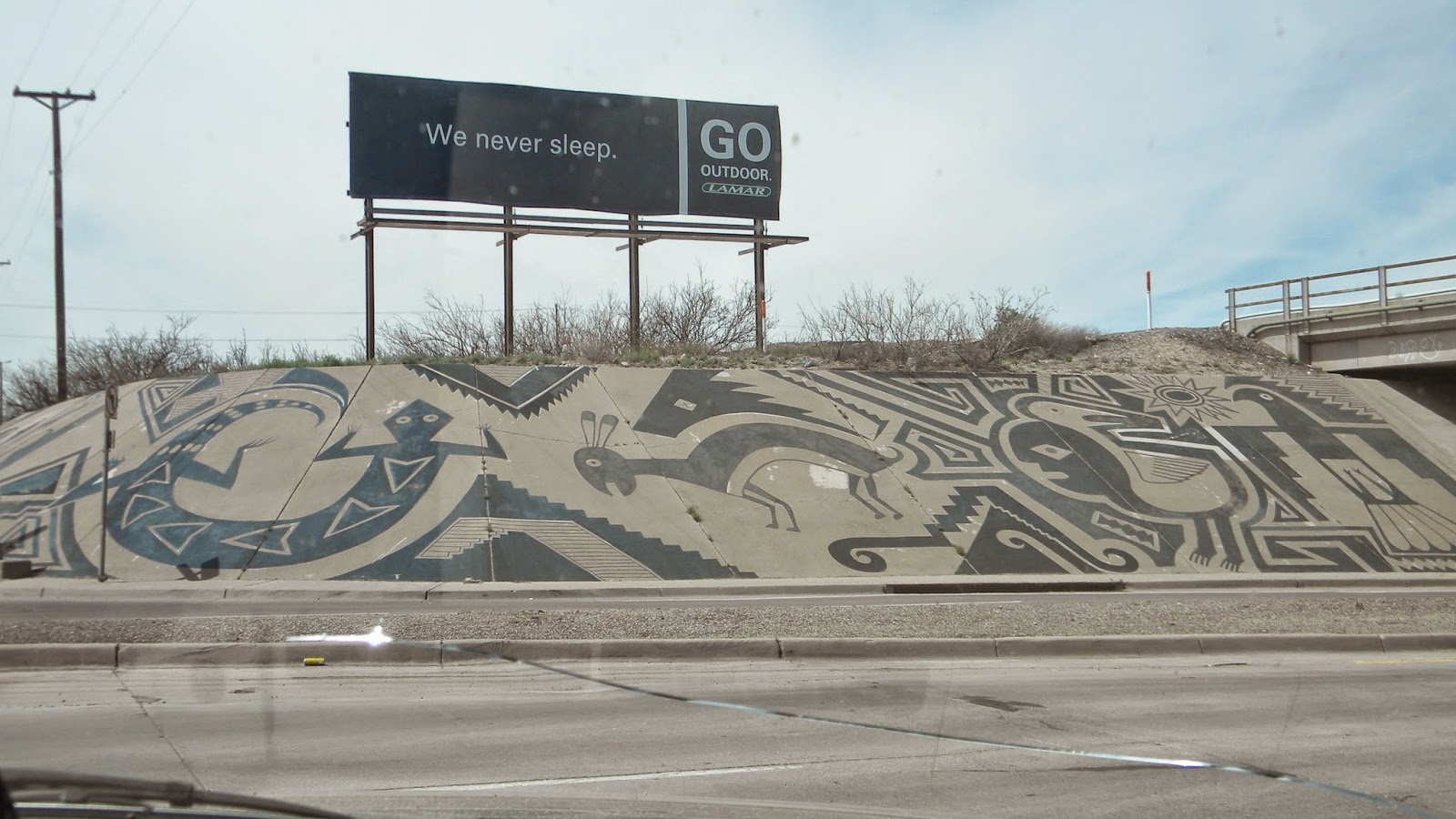 And, we made it to the City of Rocks at 1:36, where Logan announced, "God made it all by Hisself!"

Daddy and the kids climbed a bit while Mommy and Shane organized some of the things that had been packed in a hurry. Shane was VERY helpful. Or not. At some point, he bit his tongue - a nice little half-circle at the tip - and kept gushing blood off and on all afternoon, which helped greatly with clean-up!

Sandwiches and apples for lunch, 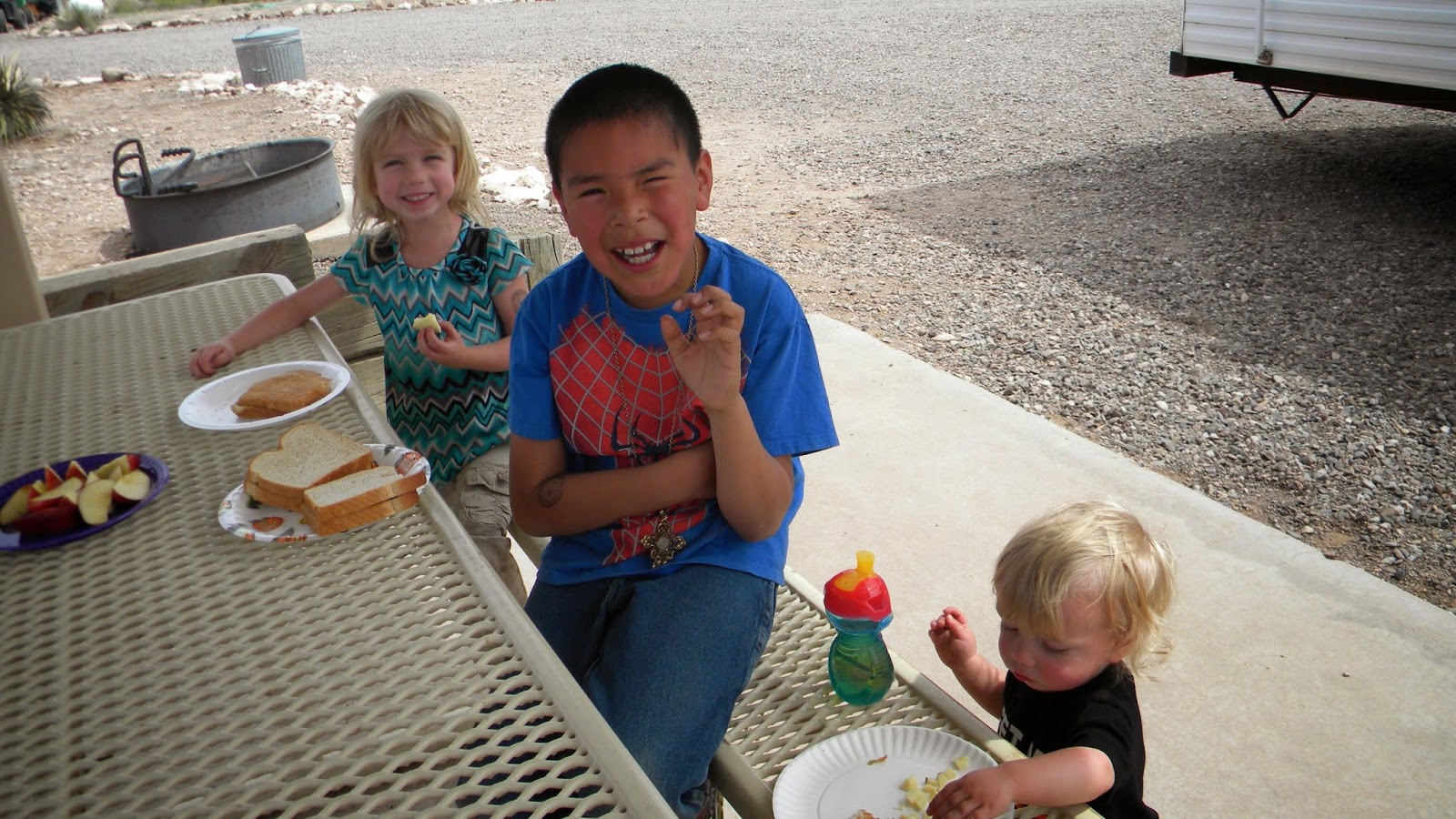 a litle gravel to help us digest (we were reading about birds), 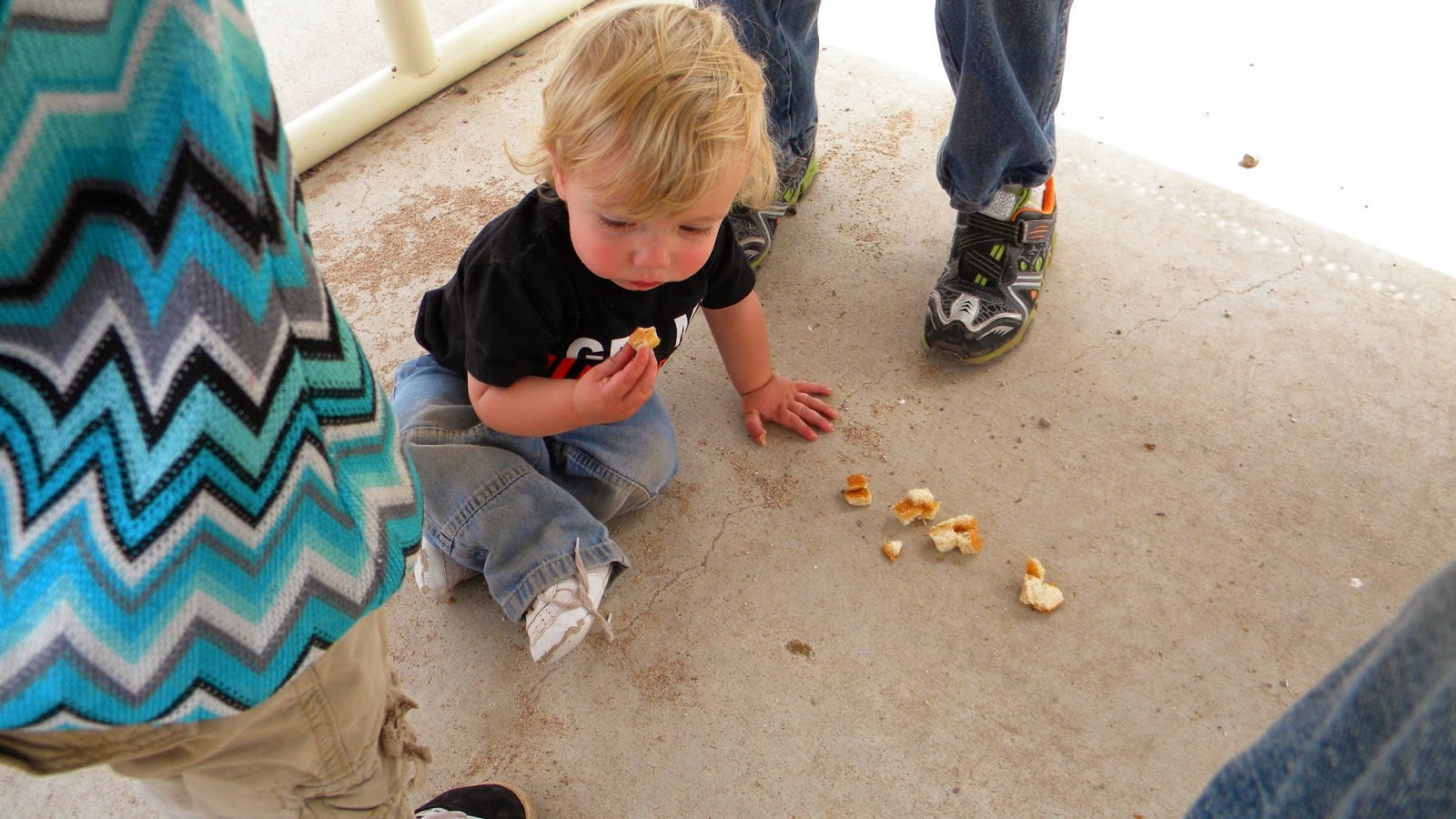 and some very happy (goofy) kids. 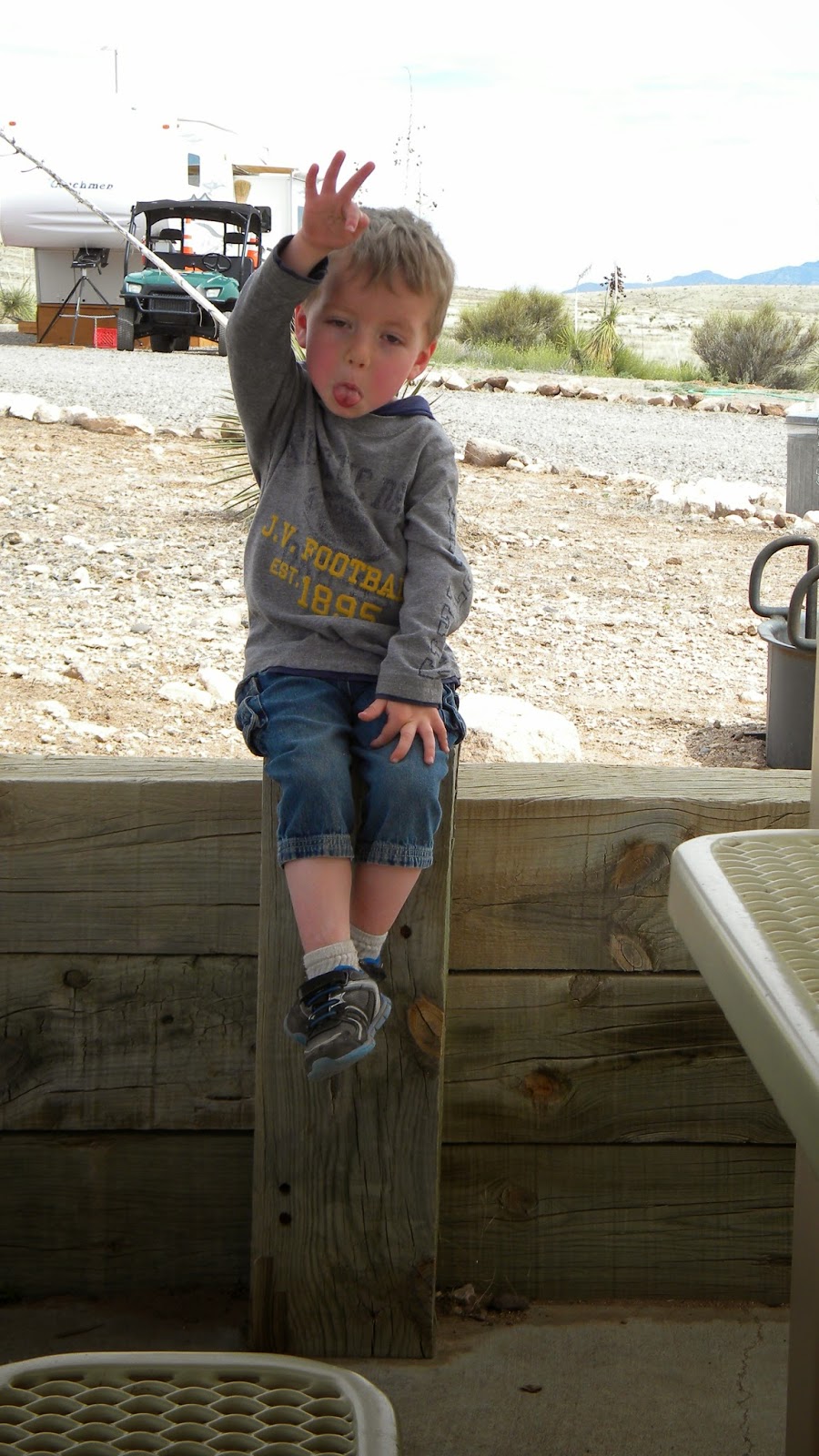 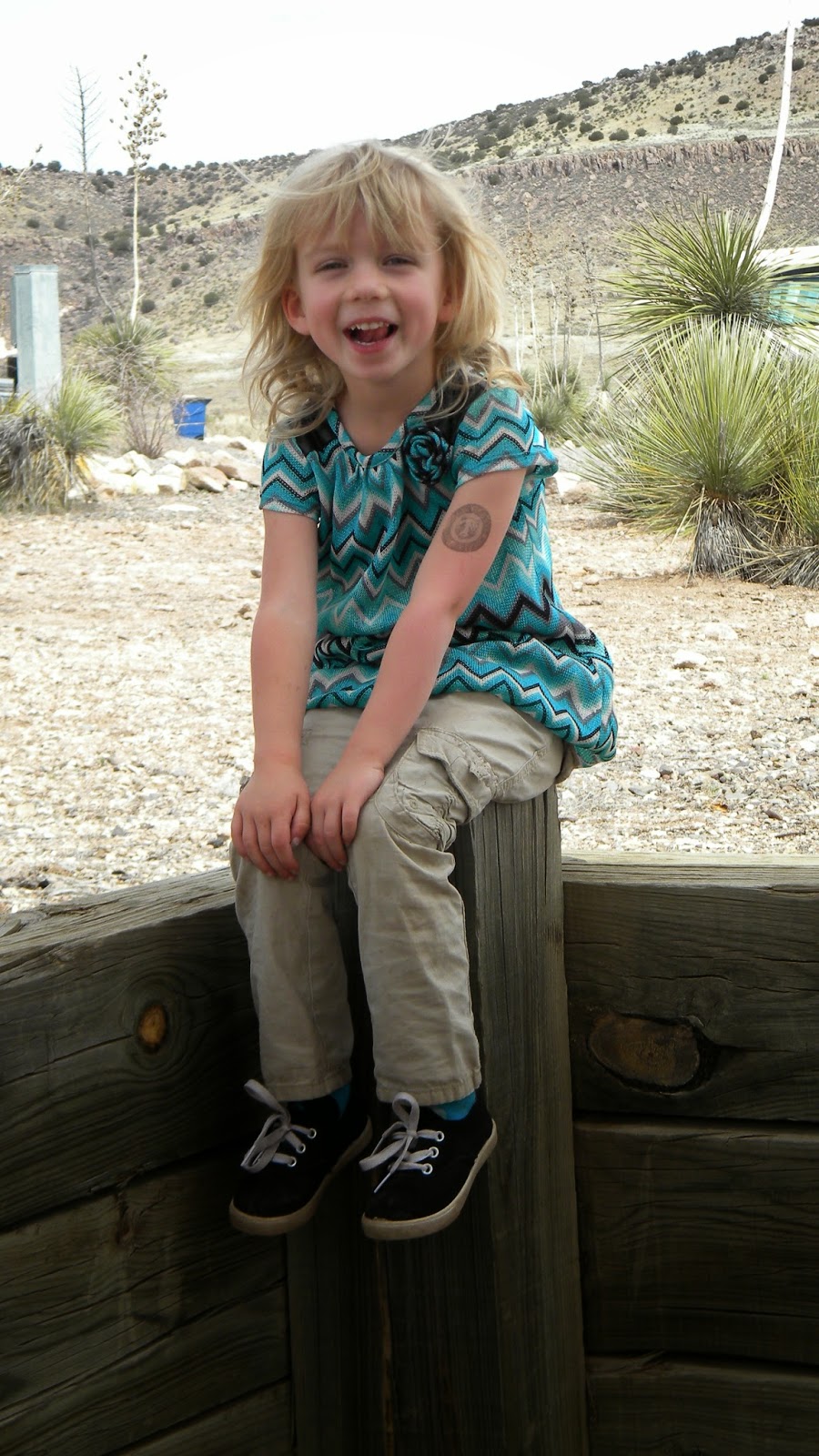 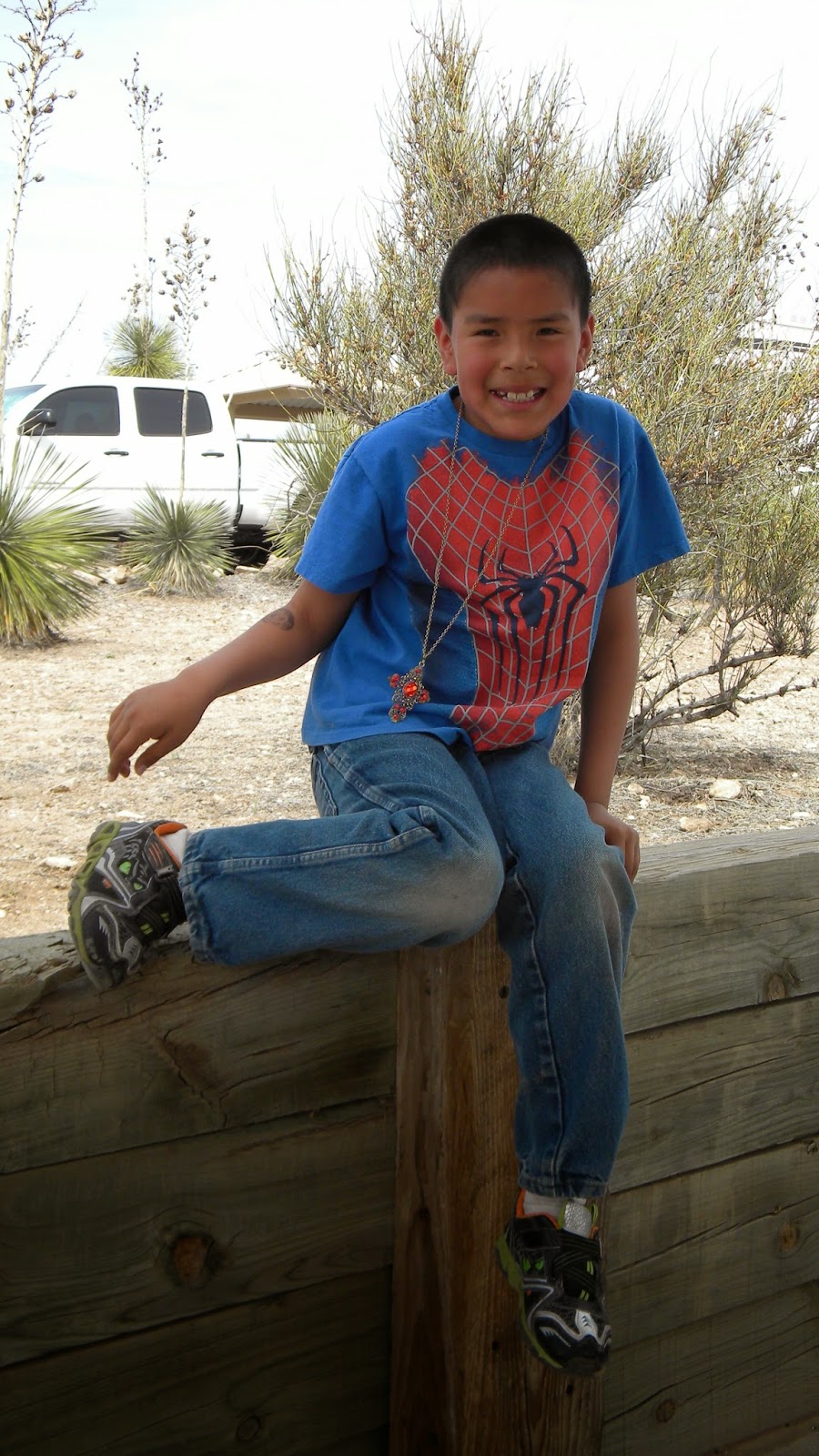 Then we all went exploring! 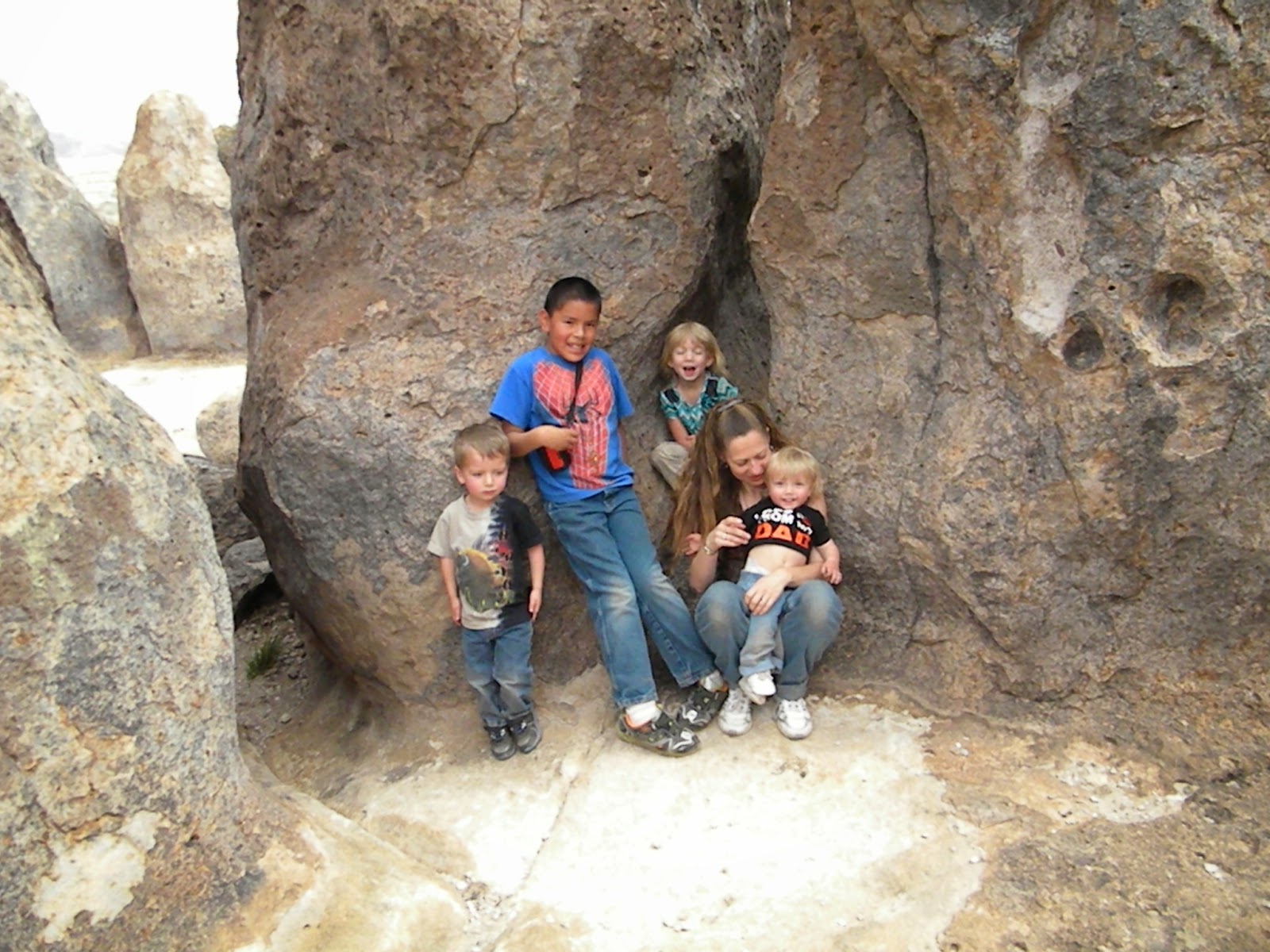 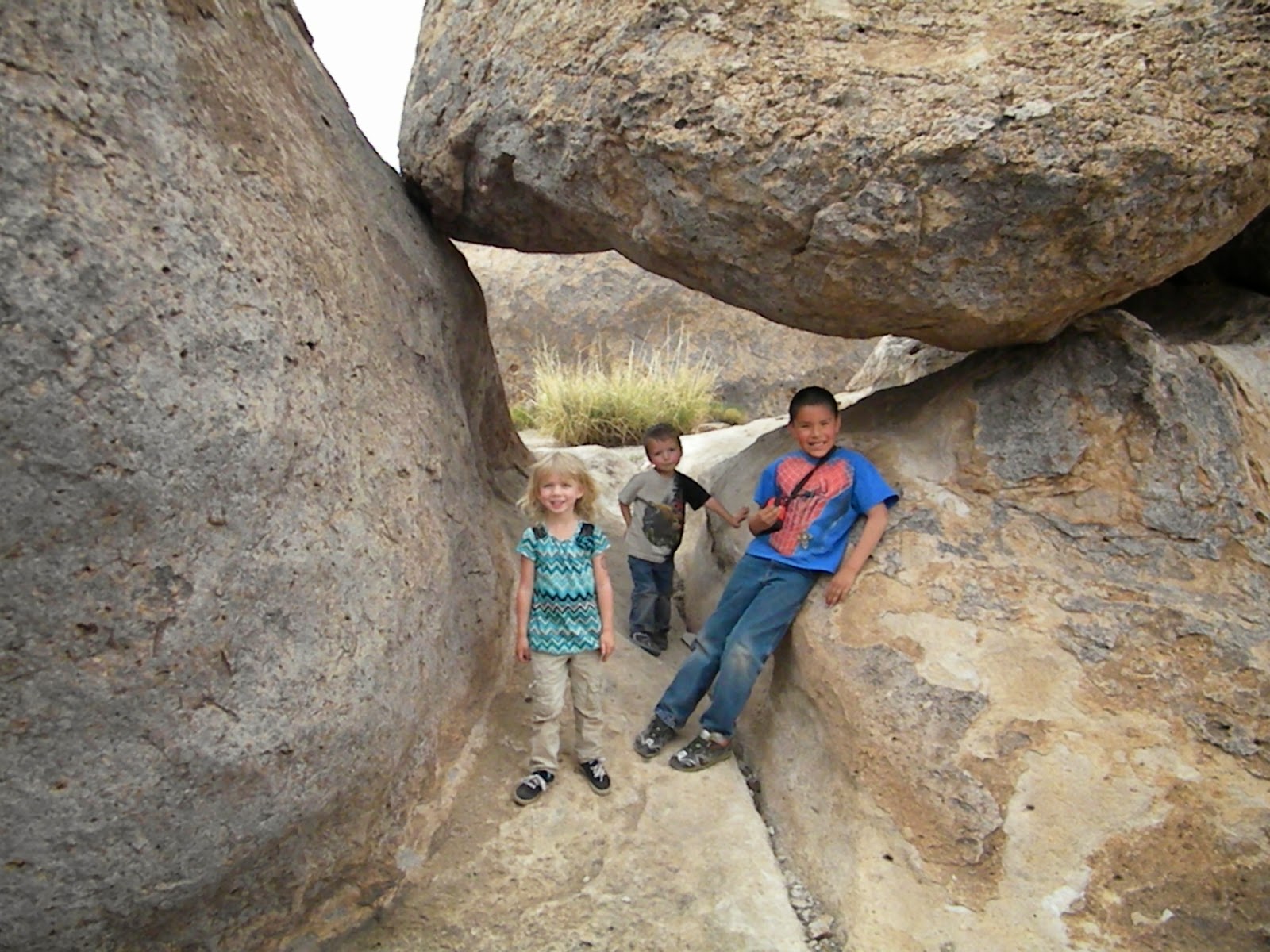 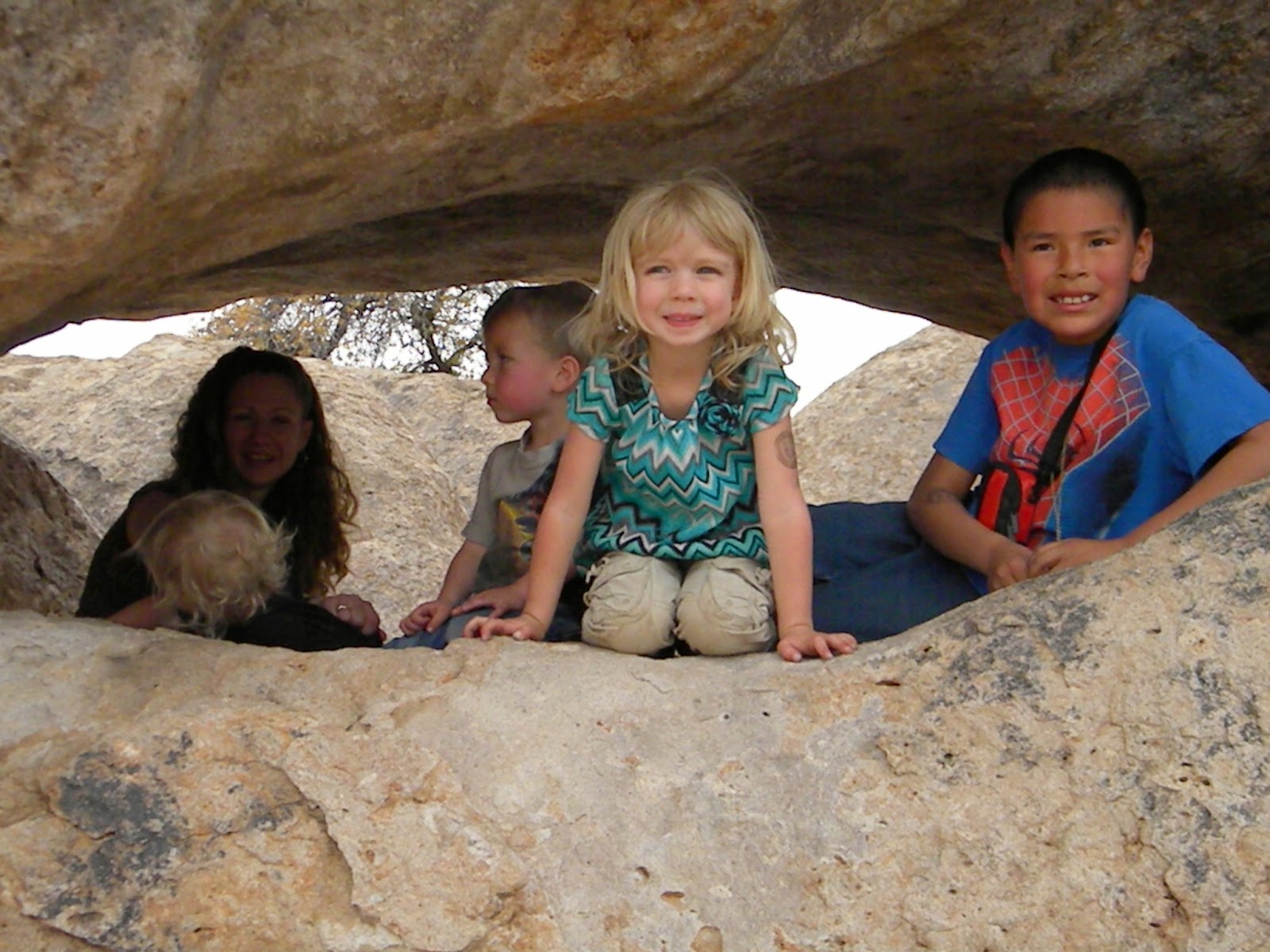 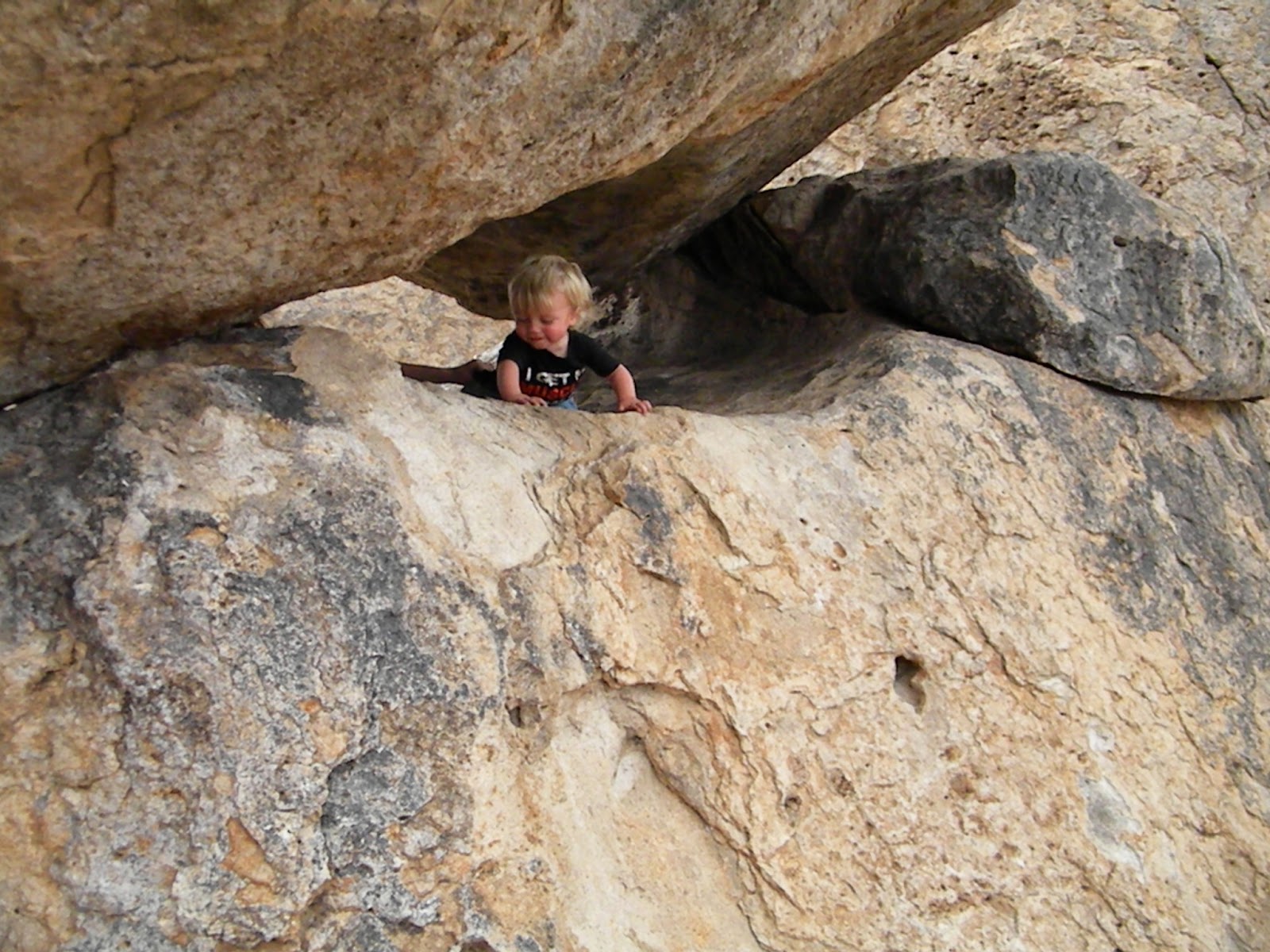 This place is COOL! We will have more pictures tomorrow, but we had to get some in this dragon's nest! 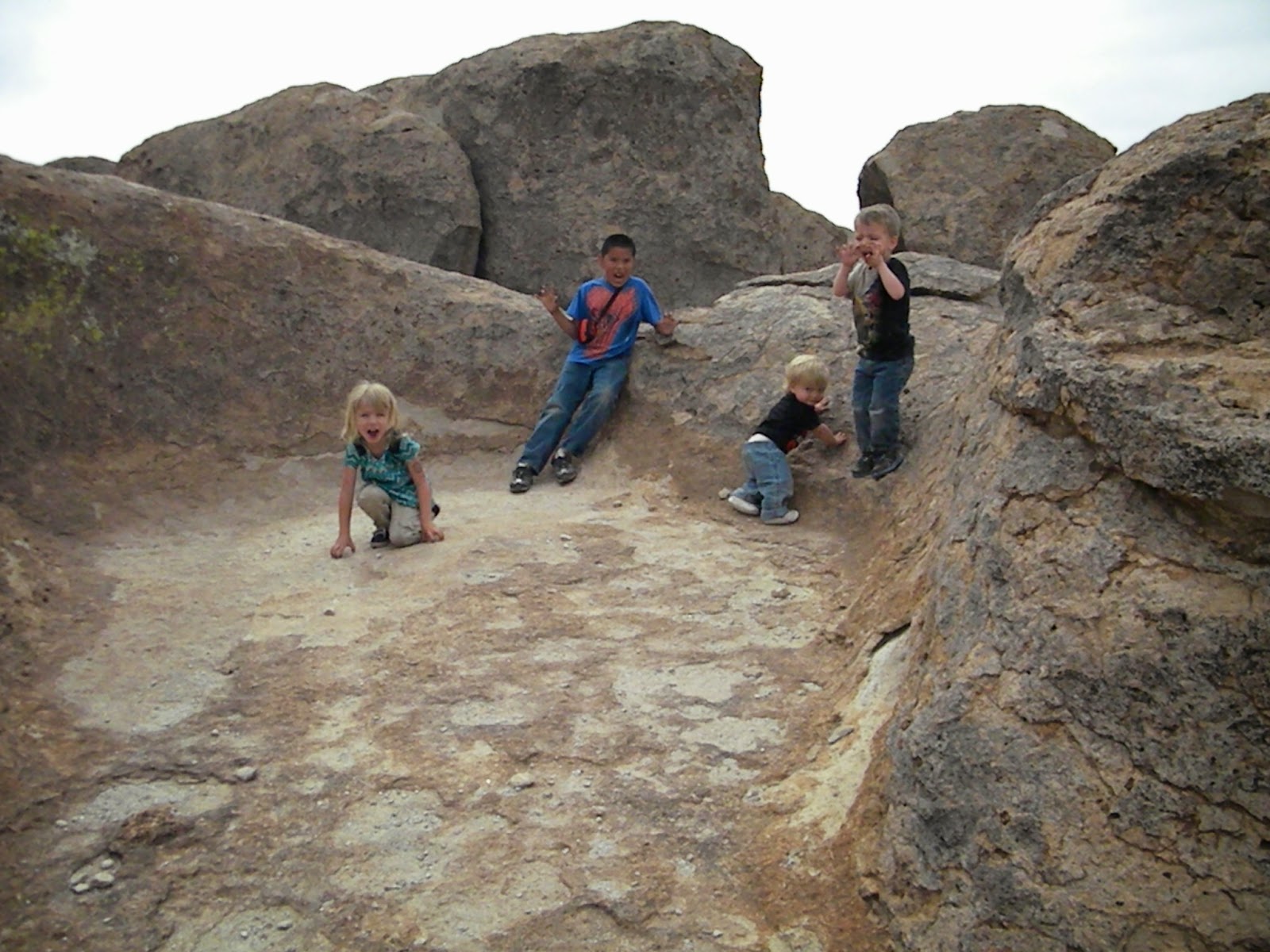 I even caught a baby dragon! 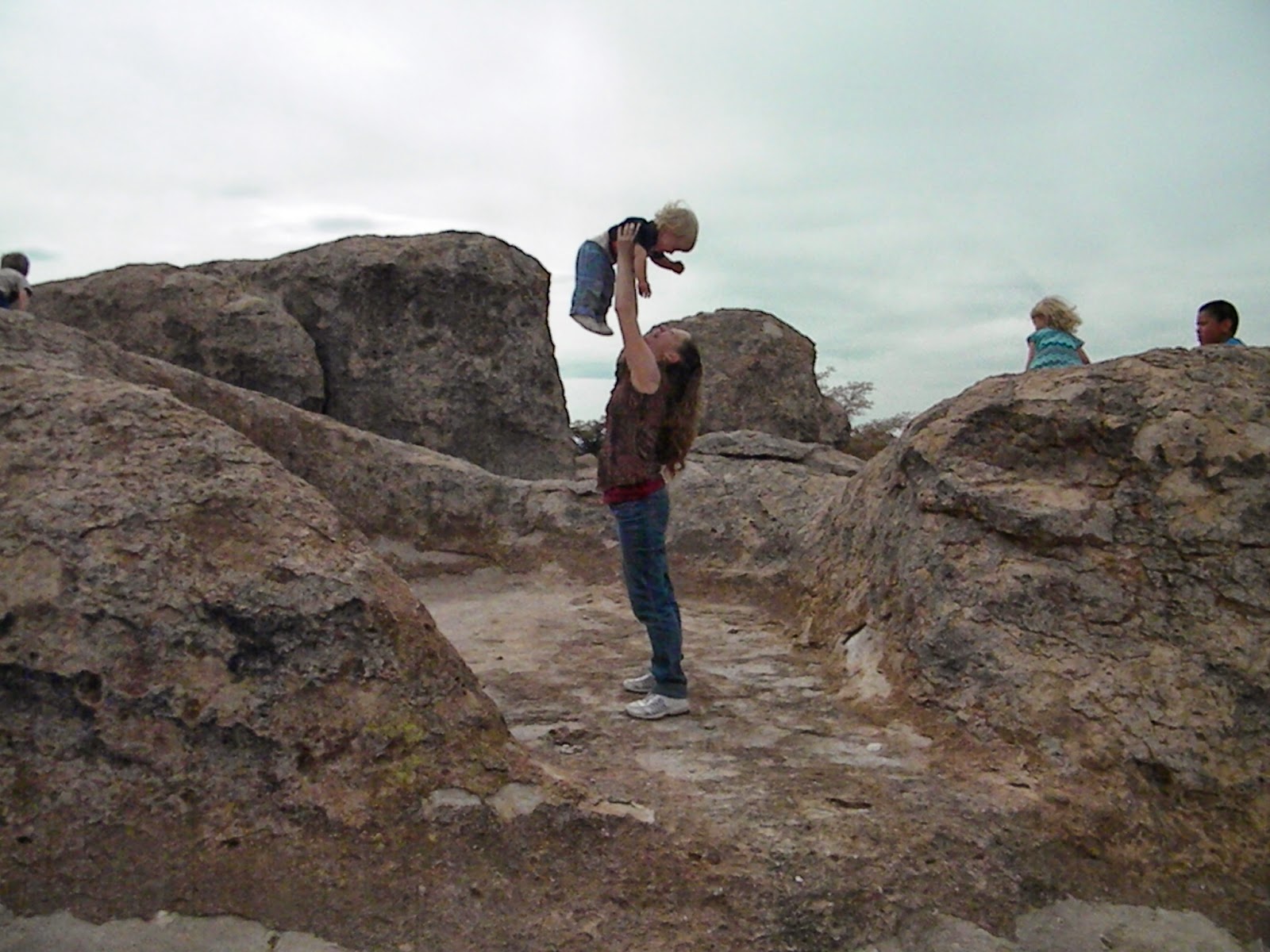 For supper we had brats on the grill, and everybody made his or her own veggie packet from yesterday's Bountiful Baskets haul. 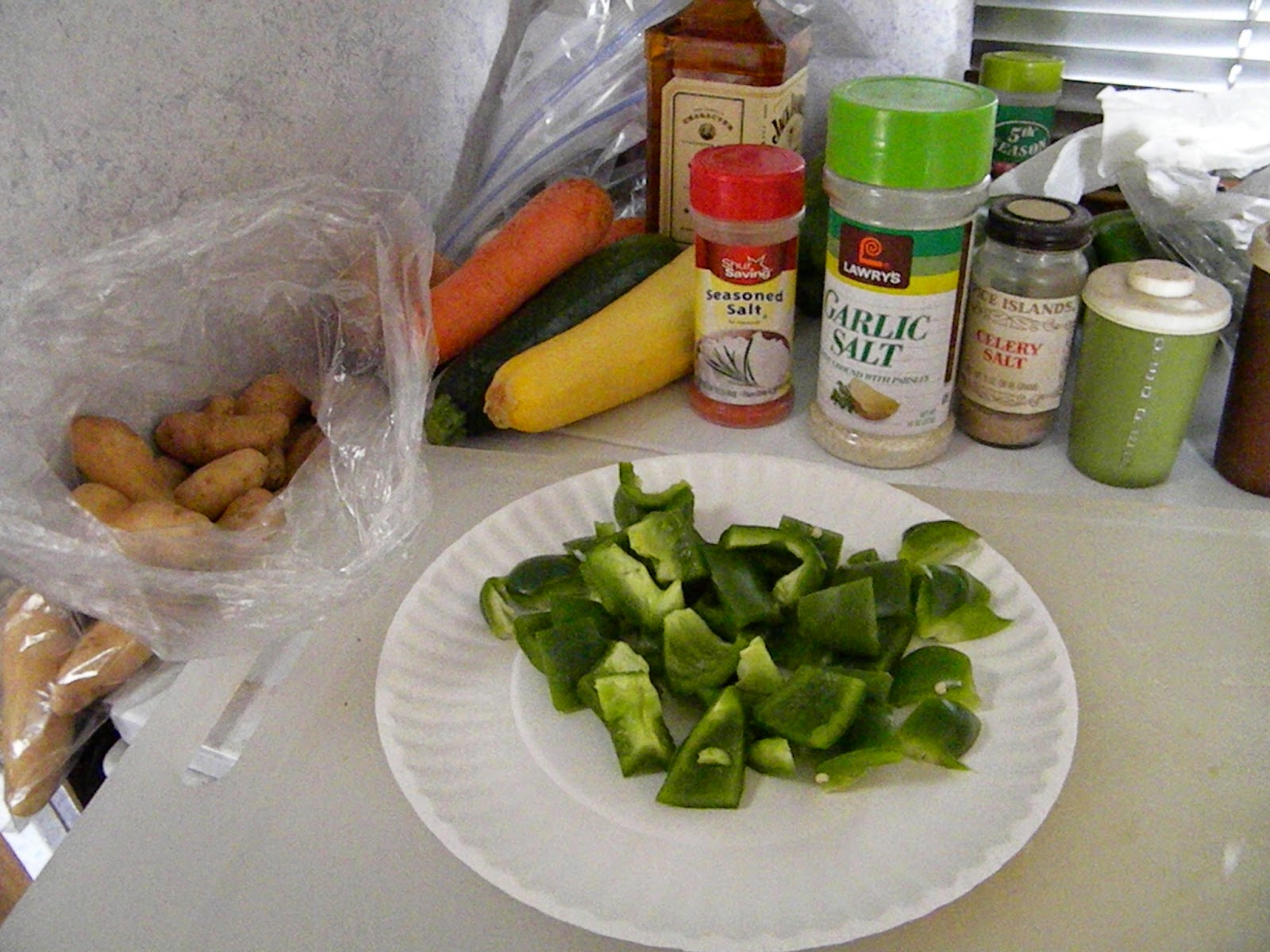 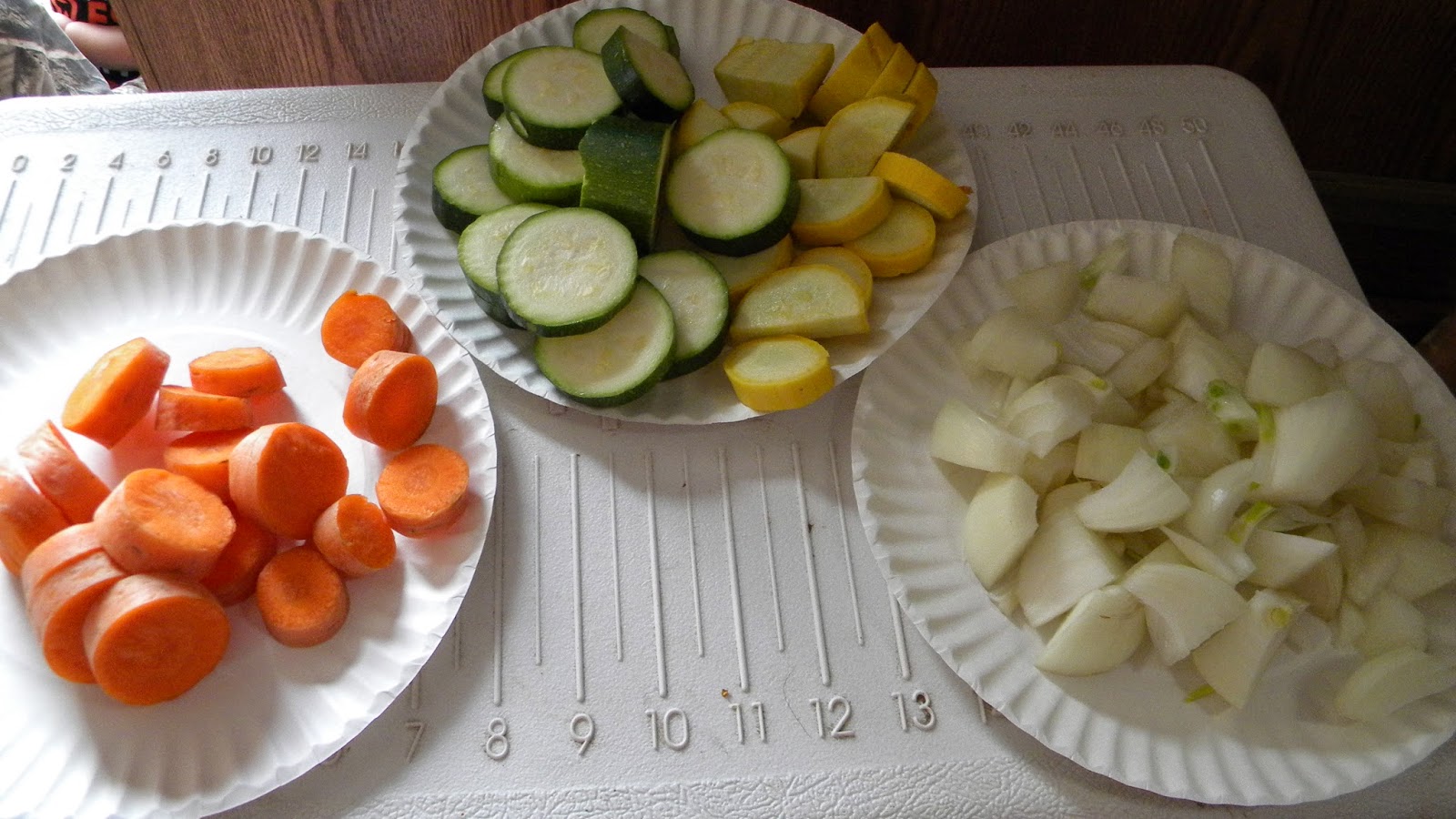 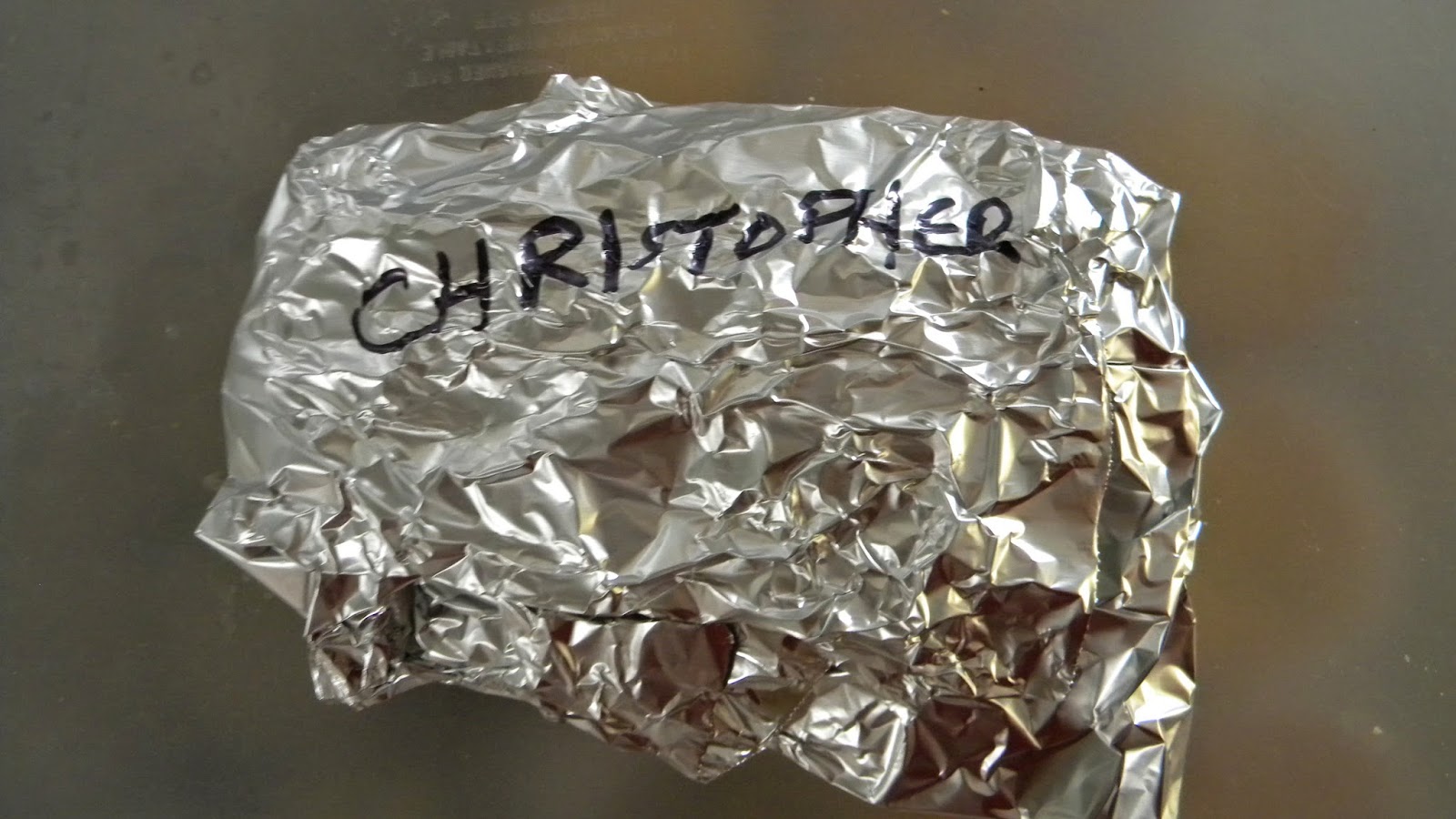 While it was cooking, Christopher met the boy at the campsite next to us. His name was...Christopher! His parents are Dusty and Kimberly, and they were from Albuquerque, but Dusty used to live in...Alamogordo! All the kids ended up over at their site playing, while the grown-ups chatted.

Well, almost all the kids: 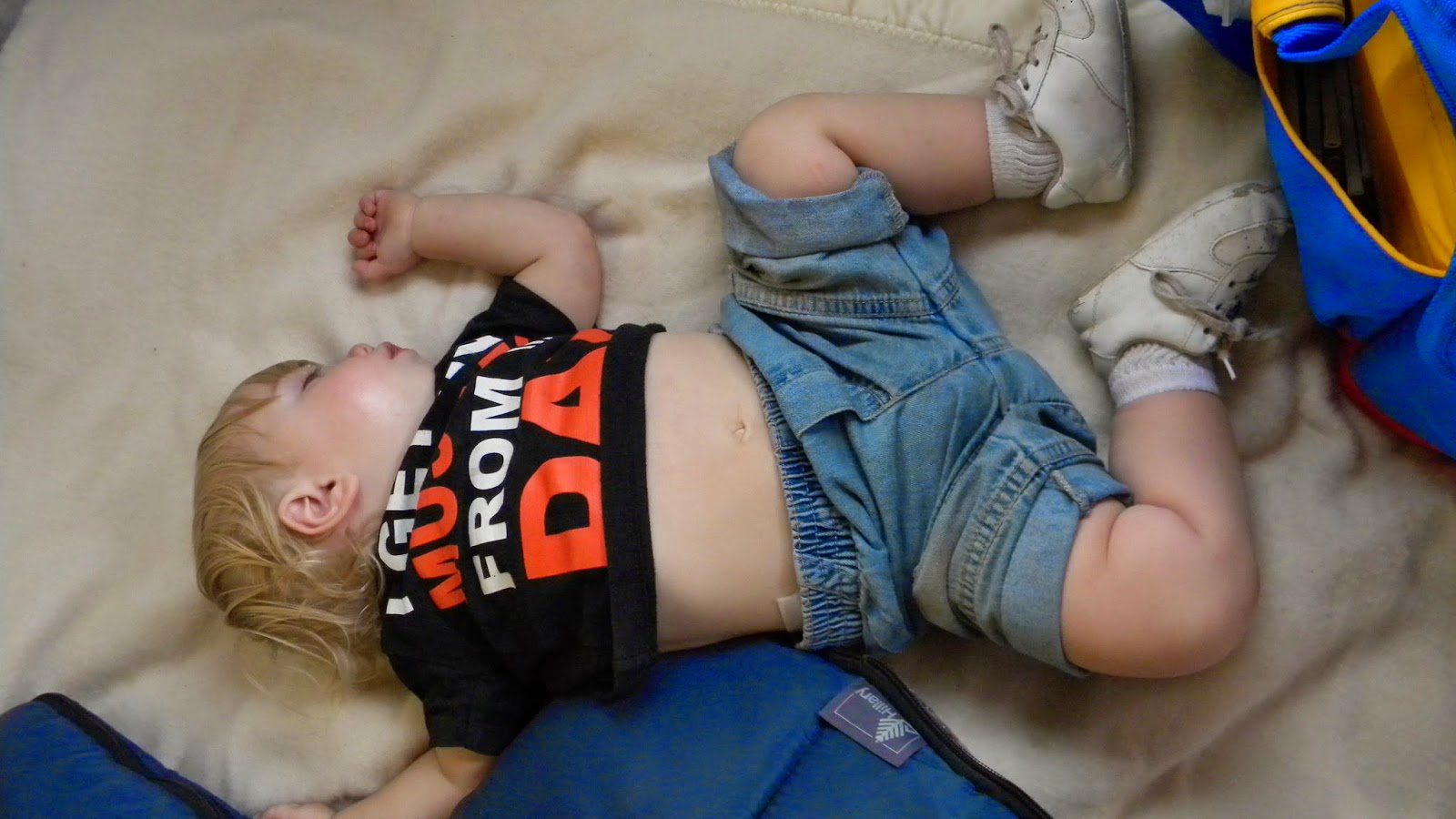 Shane insisted on walking everywhere all by himself, and he was POOPED!

Mom busted out the chalk, and we made our (temporary) mark. 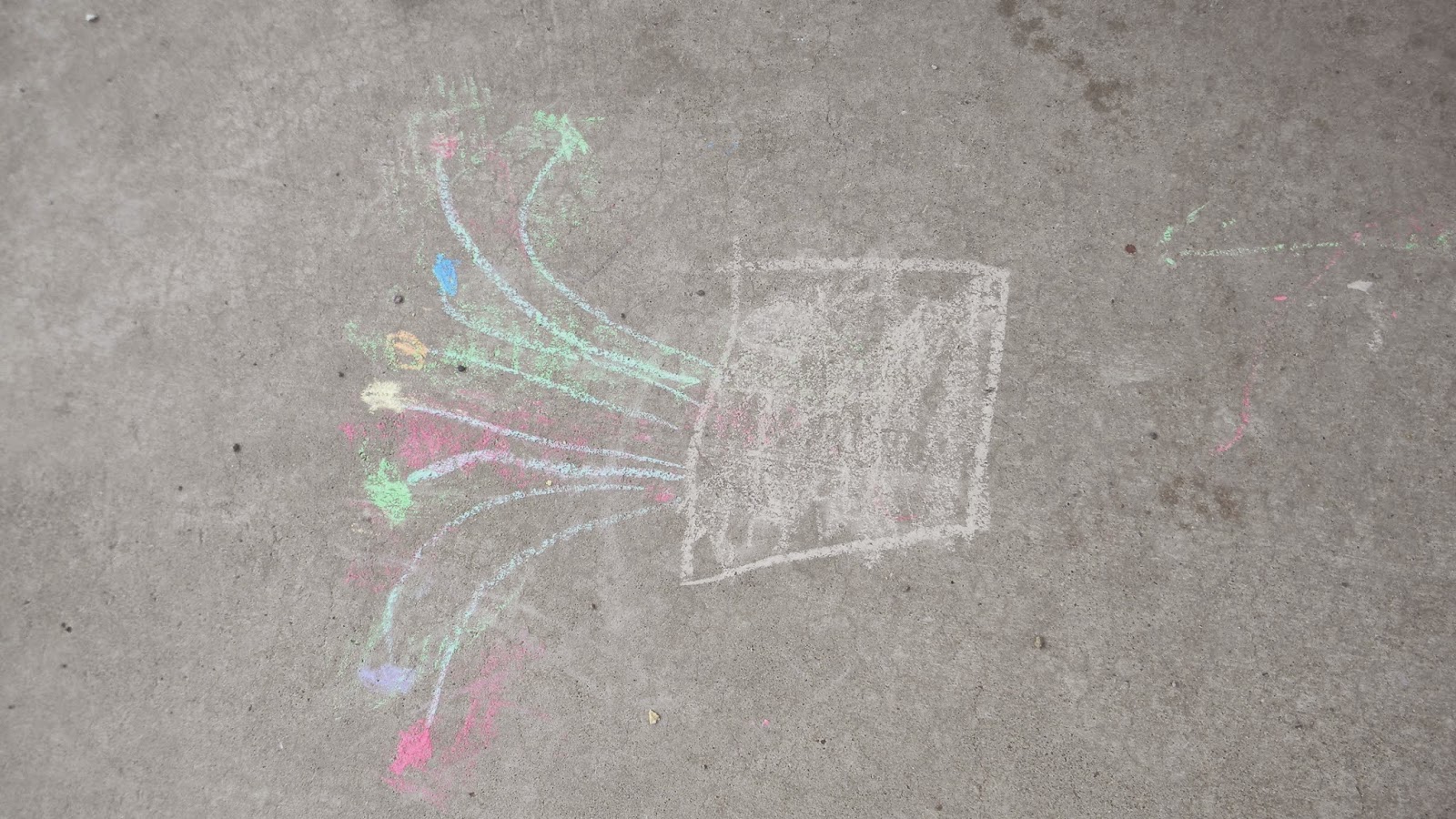 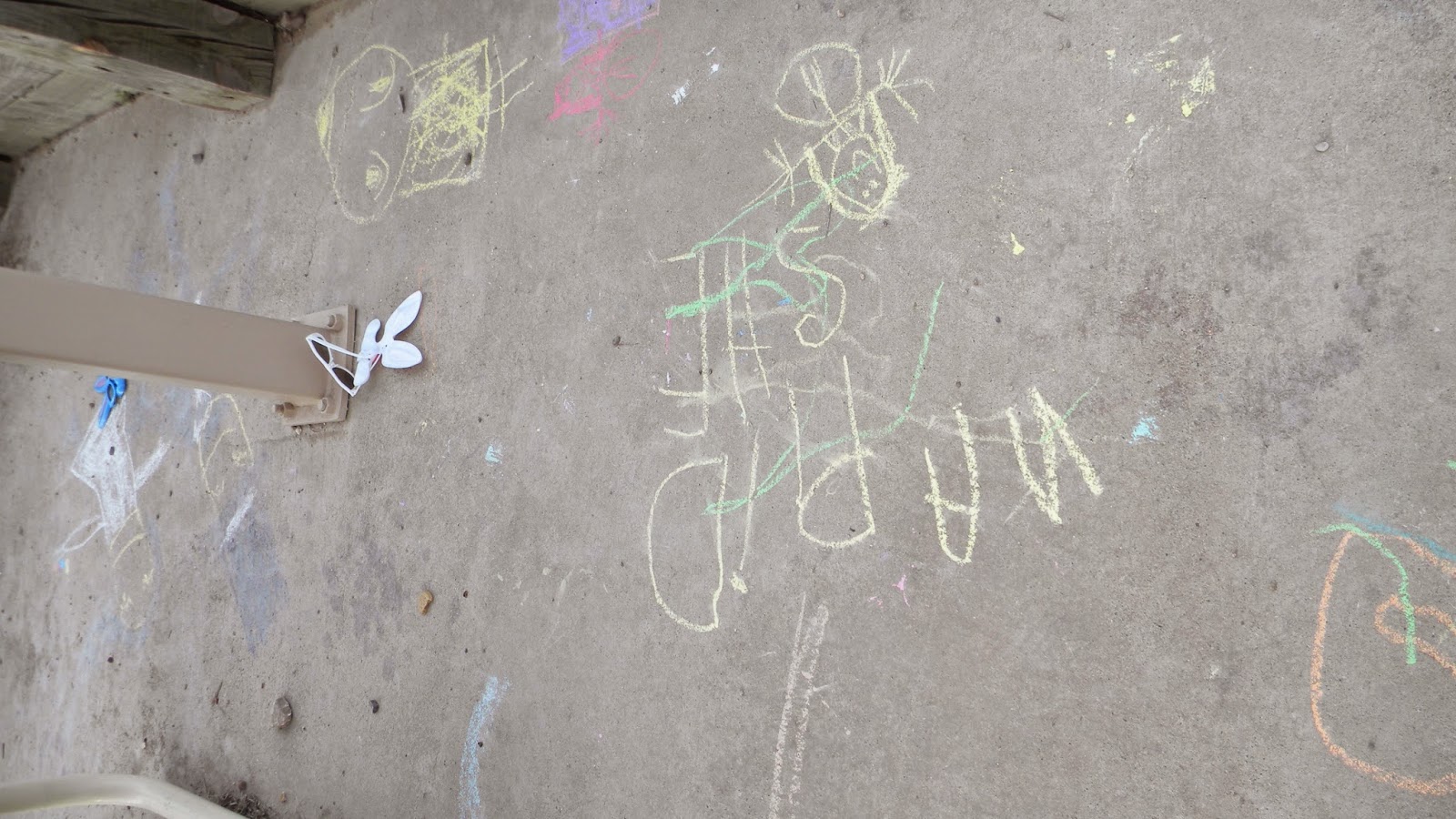 A bunny joined us for supper. He is obviously quite used to visitors, so we resisted the urge to feed him. 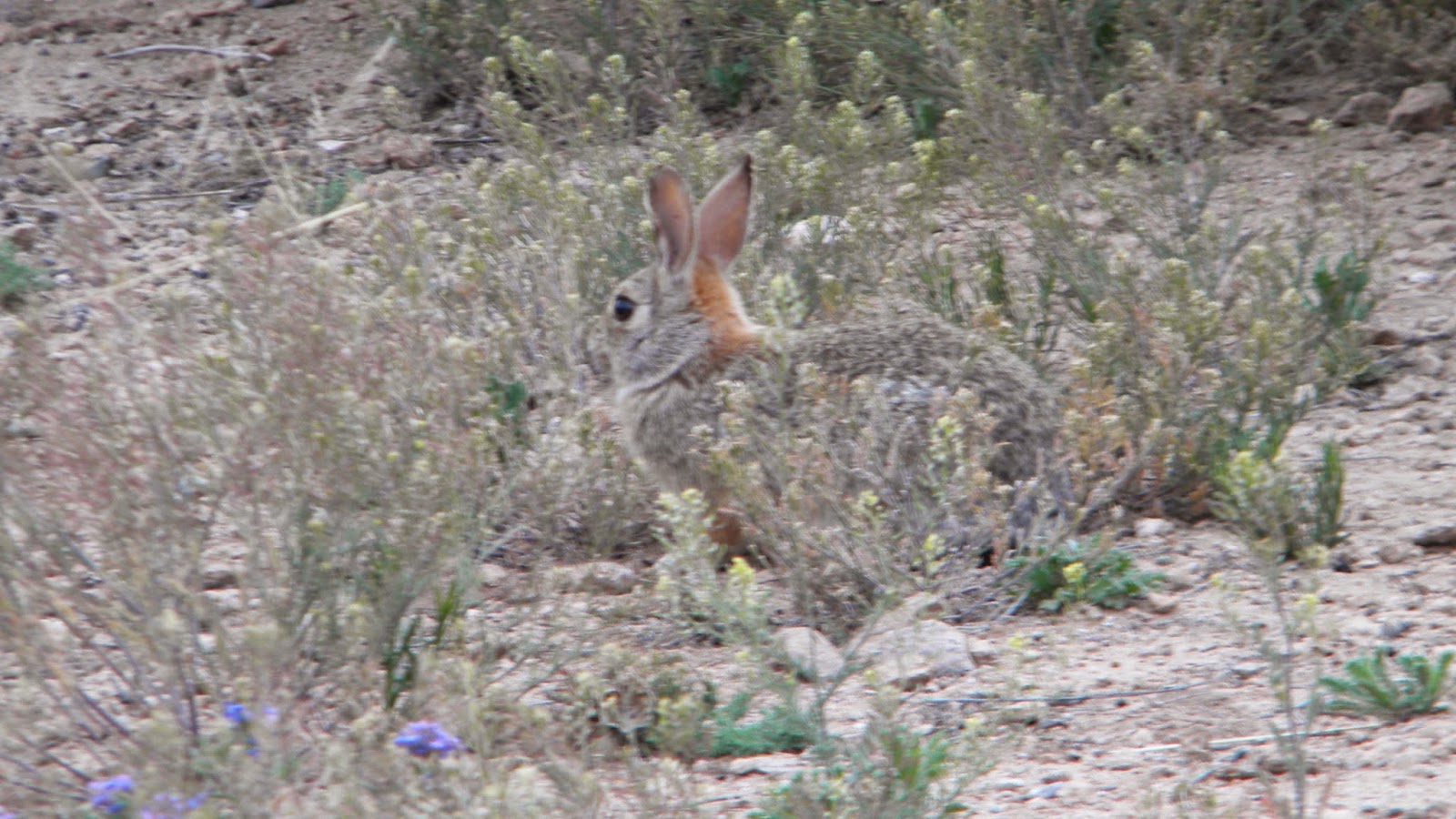 Beautiful sunset, and bed by 8PM. A fantastic start to the vacation! 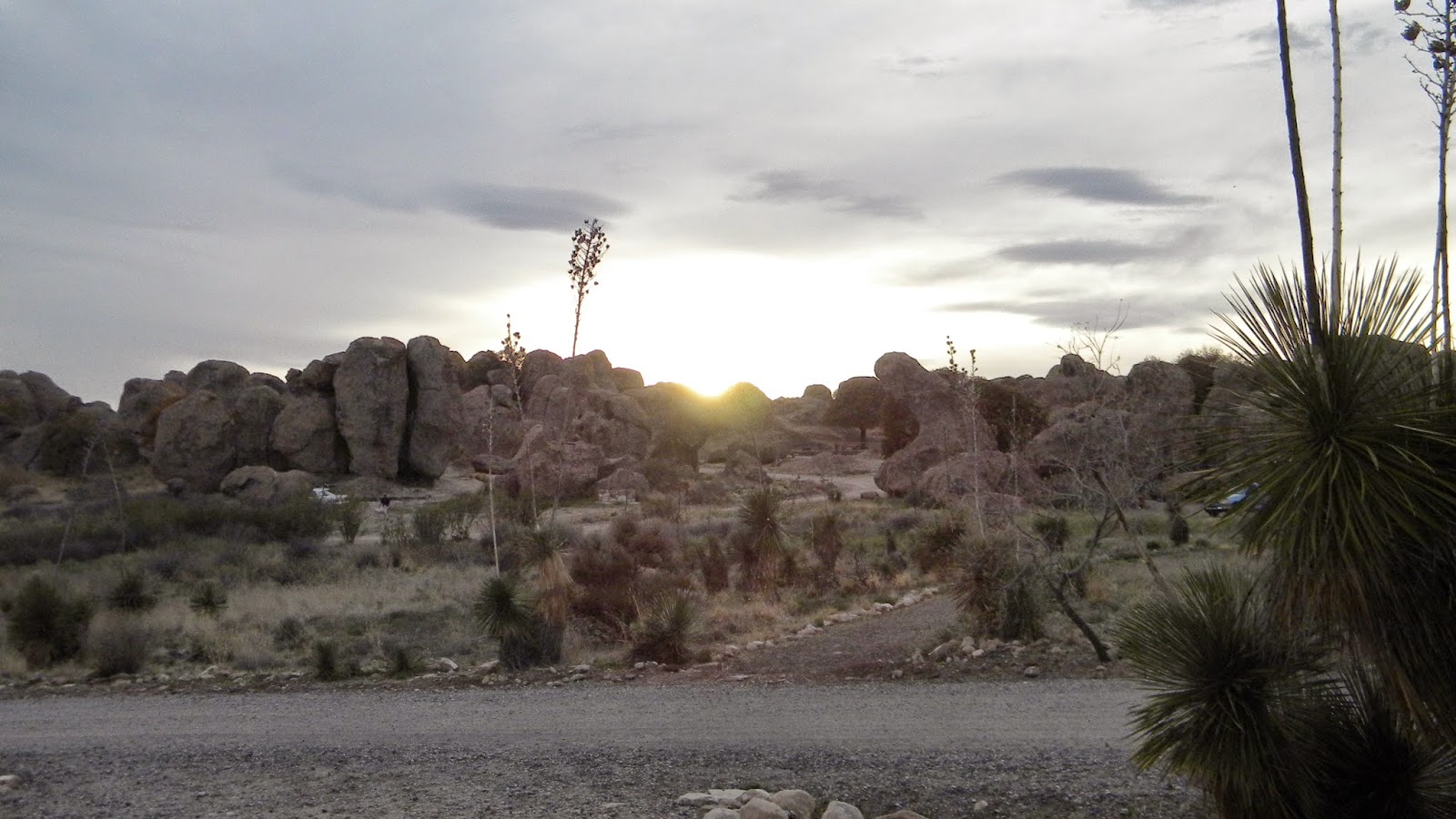 Rocks We Saw
White Sands
mountains
chunks of pavement where road was being torn up in Las Cruces, and stone dividers ready to go in
City of Rocks!

Other Things We Saw
World's Largest Chili at the America's Best Value Inn on I70
A man walking down the middle of the Rio Grande, which was bone dry

C noted large number of campers we saw on the road - "It sure is a nice day for camping!" Mommy pointed out that other people are probably on Spring break, and out with their kids. S: "I hope so, so we can maybe meet their kids and be friends!"

By shortly after noon: I wonder if we could put those dog barriers between the kids? What do prisons use to transport inmates? Make a note to check the online auction sites...