Around the World - Bhutan

We finally moved over to Bhutan, though, and that was definitely a cultural switch. The family in our book is made up of 13 people living in one home. We had to draw up a family tree to get straight in our heads how everyone was related: 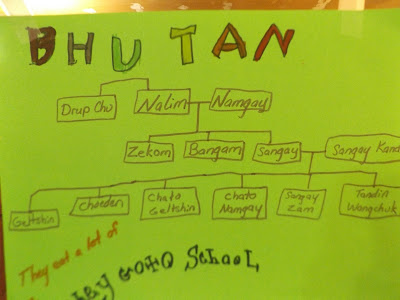 Most Bhutanese have two names, but there are no last, or "family" names, and children are often named by a local monk. Few names are gender specific, hence Sangay being married to Sangay!

We picked up a second book by the same authors of "What the World Eats":

and the kids were excited to recognize 'our' family on the front cover! This book gives a much clearer picture of their home. It sounds reasonable to say 13 people live in a 3 story house - until you see that the house is made of dirt, the top floor is for storing food, and the bottom floor is for the livestock. The family's prayer room is a beautiful, ornately decorated area, but the rest of the living space is bare wood.

There were so many differences in how we live, the kids were almost at a loss to decide what to write down. 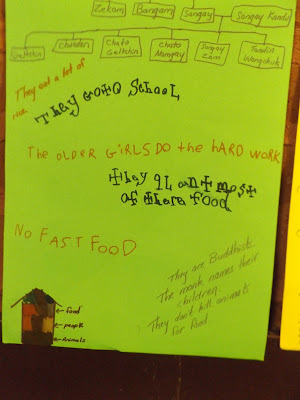 While they noted on the poster that there is no fast food (as in, in the whole COUNTRY - as of when the book was written, anyway), what really has Sheridan aghast is, no bacon! Animals are only killed for food for special ceremonies, so the diet is largely vegetarian. For our "Bhutan meal", I accordingly found some red rice and chopped up some carrots and onions we had on hand. 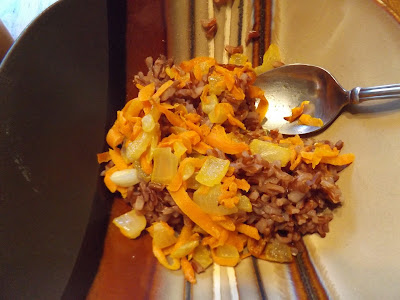 It went over better than I expected, though! I cheated and put salt on mine when they weren't looking, but the kids all ate theirs without it. 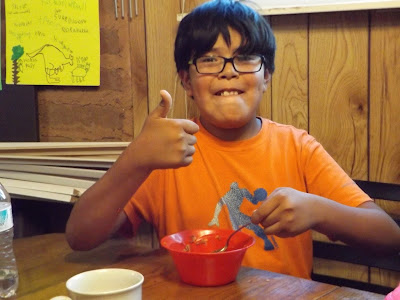 The weekly budget for that family of 13 for beverages is 76 cents. So, if you buy a soda from the machine at the library, you have just spent two weeks' budget for drinks for a family of 13. Dwell in that for a minute.

That 76 cents is mainly for butter tea. We had to try it, of course, but with some modifications, as Walmart does not appear to sell yak butter.

1. Boil 4 cups of water and add 4-5 tea bags - the darker the better (we used Earl Grey). Let it steep for a while, then take the tea bags out and add a pinch of salt.
2. Put 1/2 cup of milk and 2T butter in a blender. Reheat the tea, and pour that in. Blend until well mixed, and drink hot. 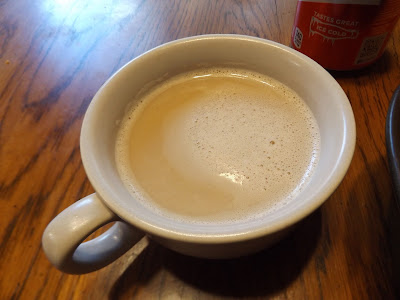 Again, the kids liked this more than I thought they would - three of the five had seconds! After the first tastes, I let them add a spoonful of sugar. I did that with mine and found I suddenly tasted the salt, whereas I hadn't before. 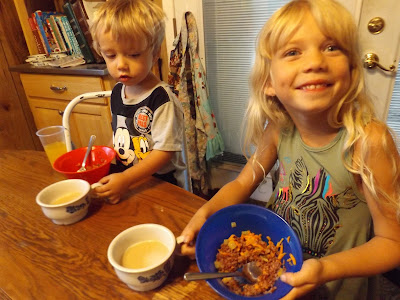 Once they finished, they asked for dessert as usual, and I told them, "There is no dessert." They reminded me of the ice cream in the fridge and the cookies on the counter, and I reminded them of the weekly budget for the family - were there cookies and ice cream in there anywhere? Besides, no electricity certainly means no frozen food.

And then they were still hungry, so I told them there was more rice. Christopher ate it all, and then, being Christopher, was still starving. We decided that while this meal was good once, we wouldn't want it every night, and that we have it pretty darn good being able to just find different things to eat until we aren't hungry any more! My pantry suddenly seems like an obscenity.

I don't pretend to think any of that sunk in and made a lasting impression that will cause my kids to stop wasting food and appreciate everything they have, but it's a start - a seed planted in their minds. I think we all respond better to tiny nudges along the way than we do to being brow beaten.

and then we will be 'traveling' to Bosnia!