Around the World - Australia

So much of my time and energy goes into the summer reading program at work, my own kids sometimes get less of my attention right when they are most at loose ends. Grandma, who has them during the day, does a lot of great activities with them, but I want to have some fun, too!

Several years back, I picked this book up for the library, and liked it so much I got my own copy:

Sitting down to a daily family meal has long been a tradition for billions of people. But in every corner of the world this age-old custom is rapidly changing. From increased trade between countries to the expansion of global food corporations like Kraft and Nestlé, current events are having a tremendous impact on our eating habits. Chances are your supermarket is stocking a variety of international foods, and American fast food chains like McDonald’s and Kentucky Fried Chicken are popping up all over the planet.
For the first time in history, more people are overfed than underfed. And while some people still have barely enough to eat, others overeat to the point of illness. To find out how mealtime is changing in real homes, authors Peter Menzel and Faith D’Aluisio visited families around the world to observe and photograph what they eat during the course of one week. They joined parents while they shopped at mega grocery stores and outdoor markets, and participated in a feast where a single goat was shared among many families. They watched moms making dinner in kitchens and over cooking fires, and they sat down to eat with twenty-five families in twenty-one countries—if you’re keeping track, that’s about 525 meals!
The foods dished up ranged from hunted seal and spit-roasted guinea pig to U.N.-rationed grains and gallons of Coca-Cola. As Peter and Faith ate and talked with families, they learned firsthand about food consumption around the world and its corresponding causes and effects. The resulting family portraits offer a fascinating glimpse into the cultural similarities and differences served on dinner plates around the globe.

This book is an absolutely FABULOUS way to gently introduce some of the differences in culture and living conditions around the world - something I have really needed to do with my kids. Our plan is to spend a week or two through the summer and fall on each country, learning what we can and trying out some of the food, crafts, music, etc.

Since the countries are in alphabetical order throughout the book, we started off with Australia. I brought home:

- an adult travel video (boring, but we got an idea of the landscape, and they recognized the Sydney Opera House from Finding Nemo!)
- two Jeff Corwin videos (MUCH more interesting, and then we went to a reptile show with The Island of Misfit Morphs, and we recognized some of the critters!)
- Crocodile Dundee (ancient, but they loved it, and since we watched it last they were calling out "boomerang!" and "didgeridoo!", so I knew they had picked something up along the way).
- lots of books! Anything on the country or its animals, 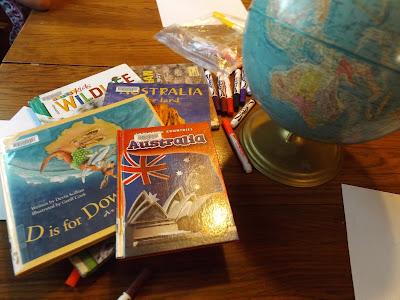 and of course you can't do Australia without a healthy dose of Mem Fox! 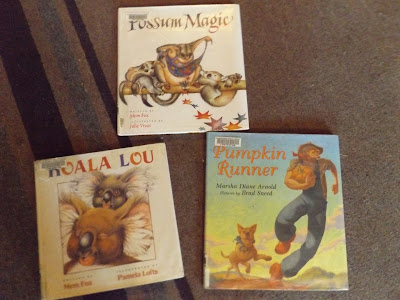 The Pumpkin Runner is one of my old favorites, so I was pleased when the kids started reading it over and over to each other. They even decided all on their own to act it out!


Fun is absolutely the key, here - for all of us. I don't have a curriculum, we are just exploring as things sound interesting. Today when we came across the term "Down Under", we grabbed the globe and looked at where Australia is in relation to the equator, which led to talking about hemispheres, poles, climates, etc.

What the World Eats includes a recipe for each country, and for Australia we had quandong pie. Not finding quandongs at the local grocery store, we settled for peaches, fresh from a friend's backyard (thanks Lisanne!) We are considering also making Lamingtons, because who doesn't like cake dipped in more sugar?! Vegemite seems to be unavailable here, so we had to order some, and it will be a while - I will update with their reactions.

We have also made a poster with things we have learned about so far: 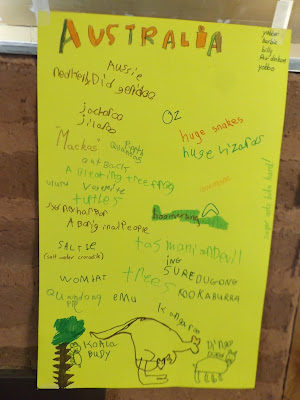 They are having fun with the slang (although for some reason "G'day mate" has not popped up yet), thrilled that Daddy is cooking on the barbie, and happily calling each other yobbos. Ah well, it could be a LOT worse!

I think Bhutan will have to be put off for another week - that's going to be a shocker for them! We're having too much fun with Oz - and besides, we haven't quite convinced Daddy we need a pet wombat yet.

***Update: Still waiting on Vegemite, but some snacks came in. 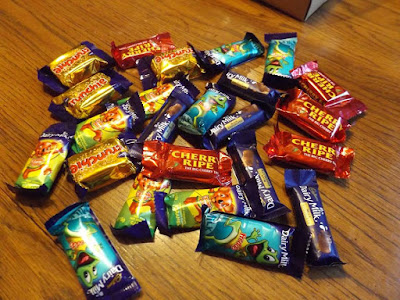 I liked the Crunchies the best: 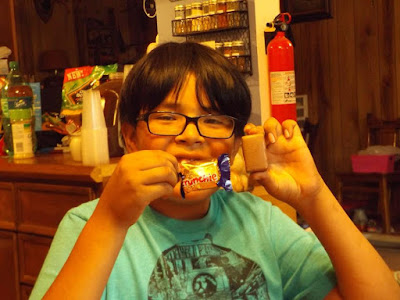 But the kids favored the Cherry Chews and Freddo Frogs: 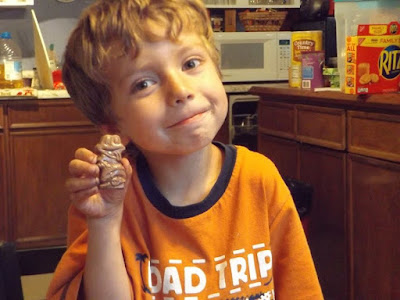 Shane chose a Caramel Koala, but had a major meltdown when its head fell off. 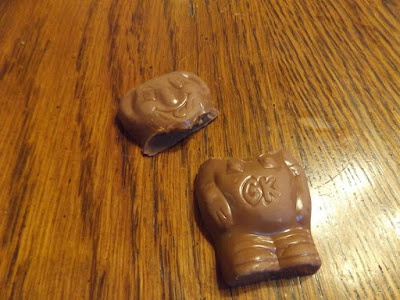 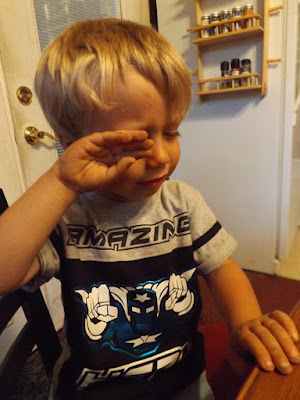 Fortunately, there was another in the box (and then Mommy ate the decapitated one.) The kids even agreed to save one of each for a Kiwi friend, who used to get Freddo Frogs as a reward for doing her homework ;)