It has been a loooooooooooooooooong time since I have posted any recipes. It is certainly not that I haven't been cooking - I have been freezing and canning up a storm. Mostly I have been stealing other people's recipes, though (this site is my latest addiction!).
Today, however, I am trying to clean out the refrigerator so I can fit some of my Bountiful Basket haul in it tomorrow, so I experimented - and I think it turned out pretty well! Or, maybe it's just that baby-to-be is finally letting me EAT again, so everything tastes fantastic!
I had two packs of grape tomatoes that never made it into a salad. I rolled them around in some olive oil, oregano, salt, and pepper,
And roasted them at 350 until they burst: 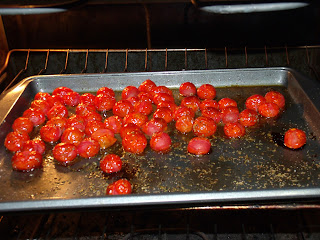 Then I chopped some green onions that had seen better days: 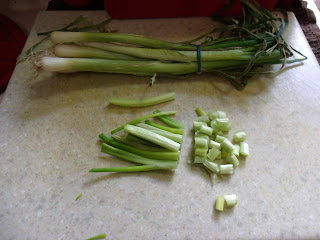 And the garlic that has been sitting there: 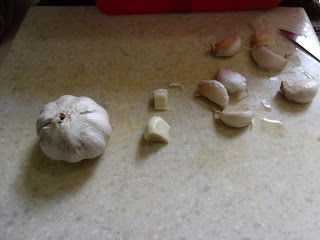 And sauteed them in butter for a bit. 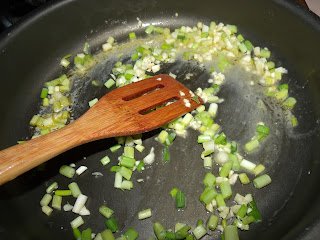 Started to chop up some zucchini, and realized
a) it was cucumber, and
b) it was slimy.
Onto the compost heap.
What else is taking up space?
A handful of olives: 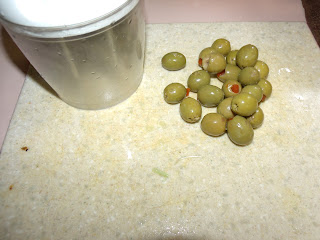 This may be a mistake, but we can blame the pregnancy thing.
Four small carrots - where were those hiding when I was pickling carrots last week? 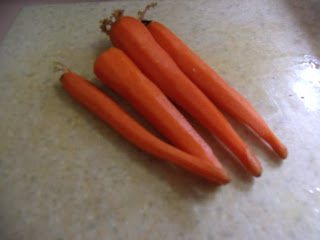 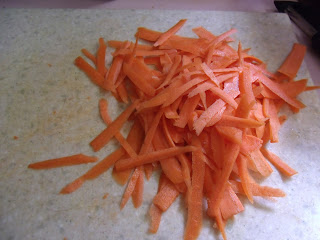 (with the peeler, because I am not cleaning out the whole food processor for four carrots.)
Throw it all together...hmm...well, it's colorful. 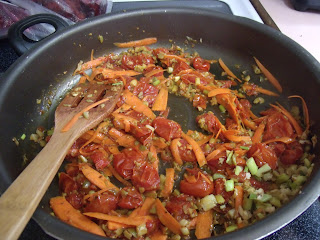 Cook up some pasta (no pictures. You know how to cook and drain pasta.) Unless you clicked on this post because you thought it would tell you what to do with your leftover pasta, in which case - use that!
And add the tomato mess. 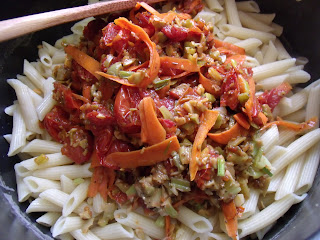 Give it a stir, and a tentative taste... 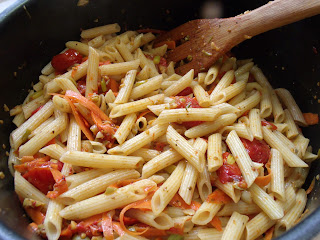 Hey, that's actually good! I mean, of course it's good. I knew it would be. Maybe a small can of tomato sauce, though. 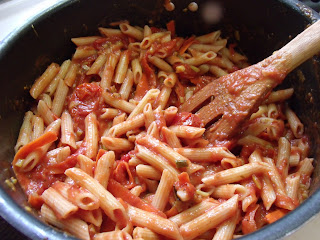 Perfect! Now, at some point, Daddy called to remind me this is a "Party at the B.'s" night (I don't know how I could forget, with S. bugging me about it all day.) No problem - more food never goes amiss there. Stick it in a casserole dish, sprinkle some Parmesan on top, 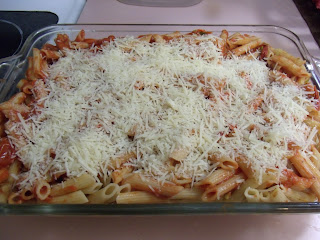 Email ThisBlogThis!Share to TwitterShare to FacebookShare to Pinterest
Labels: In the Kitchen, pasta bake