Have I mentioned I am addicted to Bountiful Baskets? Oh, yes, I believe I made mention of that. I was a good girl this week, and didn't order too much.

Just three regular baskets and two Mexican veggie add-ons. All the food you see above for $63.50. Of course, my reverse buyer's remorse, I wish I had at least ordered the assorted bread pack as well...next time!
I was absolutely thrilled with how fresh everthing was. Usually there is something I need to rush to cook/can/freeze, but this time I was able to take my time and google different varieties of recipes (all of which I then ignored, and made up my own.) Day One's accomplishments:
Grape Wine Jelly
The grapes had a good flavor, but were seeded, so I decided to try jelly.
Grab your grapes, 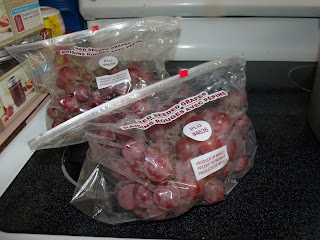 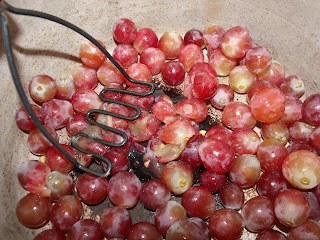 add the wine that has been sitting in the fridge, 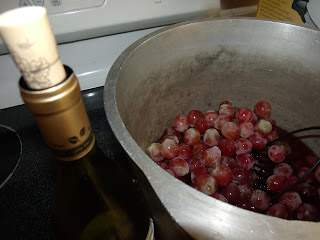 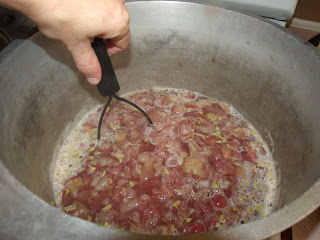 then add a cup or so of sugar, and bring to a boil.
Strain all the good stuff out, 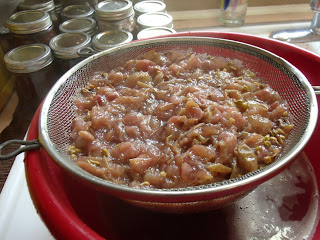 add some pectin (about 6T for 8 cups of liquid), and boil again for a minute. Can in a hot water bath. 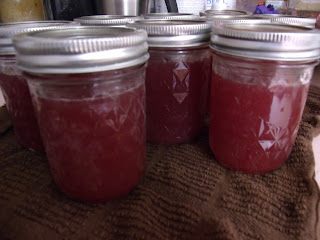 Pretty!
Freezer Slaw
(Grandma's Famous Recipe)
There are infinite possibilities for a slaw base. I started by shredding the cabbage that was in the basket, 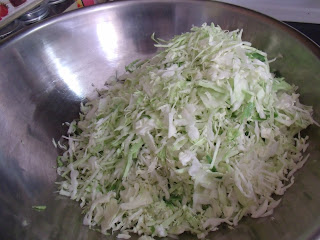 the last of the green onions from a couple weeks ago, 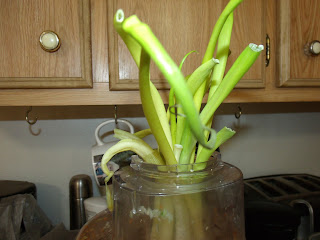 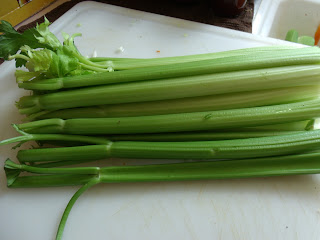 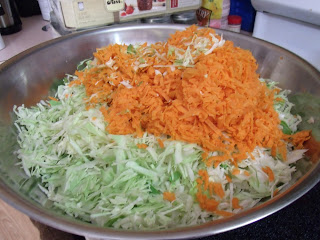 then stirred in some kosher salt and let it sit for a couple hours while I did other things. 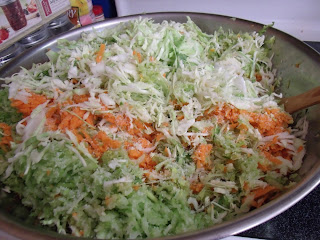 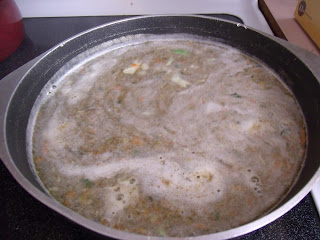 Dump it on the slaw mix, and stir it into a soupy mess. 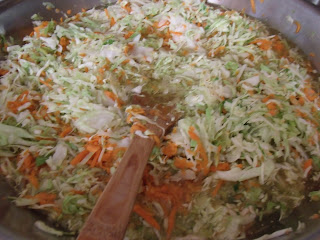 It will instantly shrink down to about half of what you thought you had! Let it sit again if you have time, or go directly into bagging it for the freezer. The longer you leave it, the better it tastes.
Bread and Butter Pickles
(from 365 Days of Creative Canning)
I like cucumbers as-is, but with so many other fresh veggies around to nibble on, I decided to try making pickles for the first time. I discovered they are really pretty simple:
slice them up with some onion, sprinkle with kosher salt, and let sit for a few hours (I love recipes I can start and then leave while I start another!) 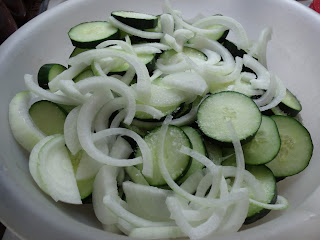 Have you noticed I usually do extreme close-up shots of food? That's because my kitchen is tiny and crowded, and I don't have beautiful counter space with floral arrangements behind them, like The Pioneer Woman. Plus, my kitchen is usually a mess.
When you are ready to get back to the pickles, mix:
3 cups cider vinegar
2 cups sugar
1 tsp turmeric
and bring to a boil.
While that is going, pack your jars with the cucumber and onion slices. Add 1/2 tsp coriander or celery seeds (I used celery) and 1 tsp mustard seed to each jar.
Pour hot vinegar solution into each jar. Run out because you didn't get the proportions right (4 large cucumbers was too many for the above measurements!) Realize that was the last of your turmeric. Add turmeric to the growing shopping list, put the unfinished jars in the refrigerator, and process the rest in a hot water bath. 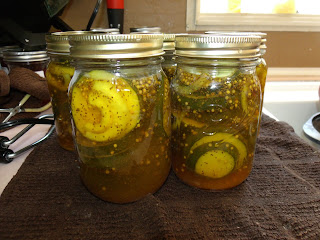 Honeyed Lemon Slices
I did this with orange slices earlier, and have been putting one in my tea every morning. Can't wait for cider weather!
Just slice up your lemons, 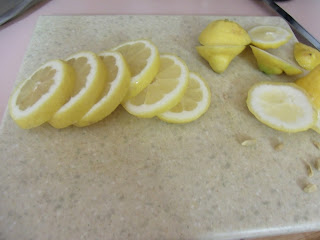 and put them in a pot with some honey, sugar, cnnamon sticks, whole cloves, whole allspice (unless your local Walmart doesn't even CARRY it any more, then you can use ground), and add enough water to cover. 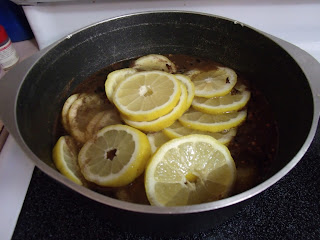 Bring to a boil, 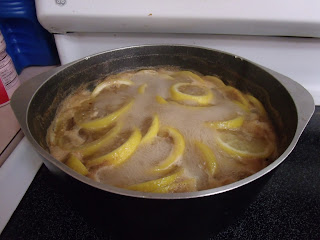 then simmer gently until most of the water is gone. 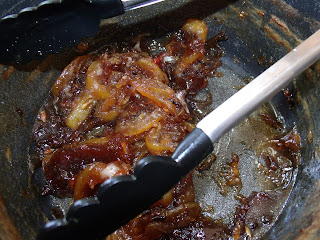 At this point, they look kind of gross, but it's all good. Pack them into a jar, then add a cup or so of water back into the pan. Simmer and stir until everything is dissolvd again. Pour over the lemon slices, and process in a hot water bath. They should look prettier when done, and will taste good either way!
At some point, here, I realized Daddy couldn't really take any of these on his 3-day trip, so I threw some cookies in the oven. A while ago I made batter for several different kinds, then rolled it into balls and froze it in mixed bags. 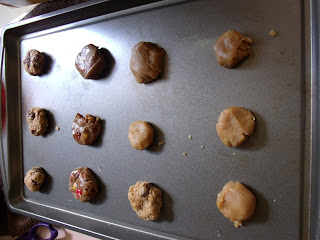 This way I can make just a dozen or so at at time, and still have a variety. Daddy likes the peanut butter, I like oatmeal raisin, and the kids are happy with M&M!
Tomatillo Salsa
I mostly used this recipe from allrecipes.com, but I made a few changes. I had never cooked with tomatillos before, and was very happy with the end result. 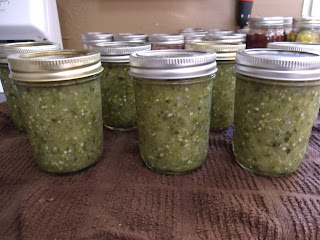 I used jalapenos instead of serrano chilis, and added a few tablespoons of sugar. That gave it a little bit of a bite, but not too much for the gringa from Ohio:) I have been in NM long enough to learn the trick of adding sugar so it doesn't melt your tongue off!
And, this is what the table looked like by the time I stopped. 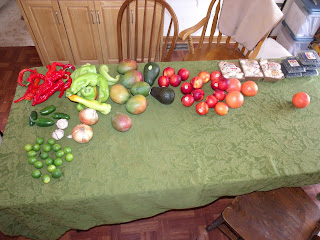 Do you see how HUGE those avocados are?! I am planning to make guacamole with those, the limes, onions, garlic, and jalapenos, but they aren't ripe. I have plans for all the others, which will hopefully appear in a Day 2 post. I feel good having made a dent in the pile, though! Hope everyone else is enjoying their baskets!
﻿
Posted by Ami at 5:31 PM