The days sort of blended together, so in no particular order...

...remember when I ran out on my lunch last week to buy snow cone supplies (and play with kittens?) It rained. All day Saturday. Anybody need any cups???


And after my shift Sunday, I found a treasure at a yard sale: 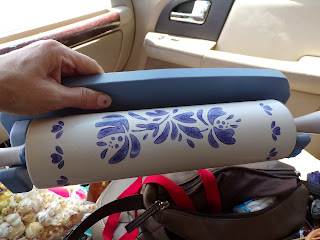 My Pfaltzgraff pattern! I didn't even know they had a rolling pin!

Overheard end-of-conversation between two little girls:
"And that's how my baby sister was born. And you, too!"

Saturday we had an arts and crafts day. We hold those occasionally, and they are usually fairly quiet, but again - rain all day! The room was packed, with about 80 kids and adults given free reign over craft materials. Including paint.

I asked the volunteers afterward for help cleaning up. One merrily skipped to the room and then stopped short at the door and said, "Oh, my." We got it done, though, in time to set up for Monday's art project. Painting again.

In my quest to see how much the parents will forgive me for, we painted rhythm sticks. 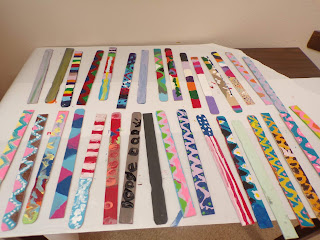 Some super cool designs! Some teens-who-are-not-volunteers-here helped clean up, and, well... 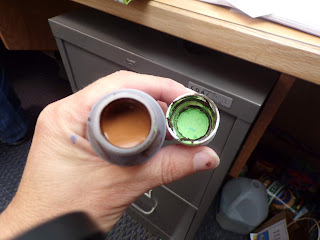 I should have been more specific when I asked them to put the lids on the paint bottles. Pretty much all 100 of them are like this. Blue lid on white paint. Purple on lime green. Sigh.

I think I figured out why this plant died. 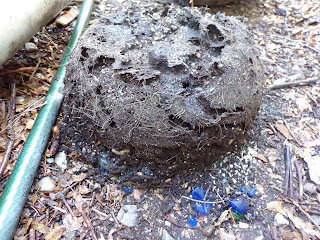 Those are flying ants and their larvae. Their tunnels went all through the pot, then through the three holes and into the ground. Pretty impressive, really. I'll spare you the video.

Spontaneous STEAM on the floor in front of my desk: 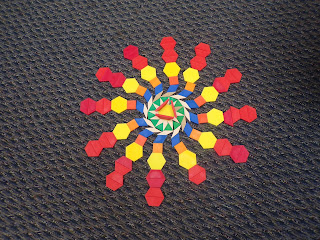 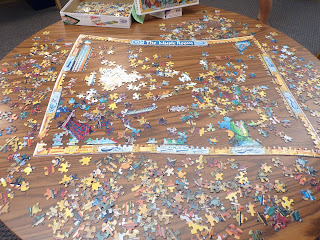 And several patrons have offered to stand as bodyguards to prevent anyone from taking it apart again. Which people have done. I don't know why.

Memo to the nameless woman at Walmart: If the police want you to go with them, you are probably going with them. Throwing yourself to the ground once you are handcuffed might be more impressive if you don't do it in slow-motion to avoid actually hurting yourself. I don't think anyone even bothered to take a cell-phone video, so you should probably just go with it.

Friday Miss Rachel from the ASOMBRO Institute came and talked to about 70 of us about the creatures we share the desert with.

She did a super job with a really squirrely crowd!

Since the topic was arthropods, our hissers came out to play, too. The baby even made a rare appearance before scuttling back underneath Mom. (You can see him on the right of the log.) 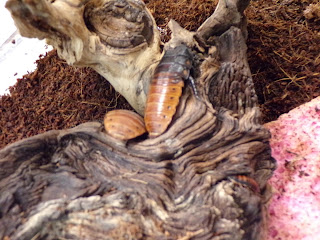 I have a basket of rocks with various pictures and words painted on them. Before each story time, I let three kids pick a rock, and then I have to make up a story with those three things on the spot. Of course, the kids have to help!

Three of my favorites so far: 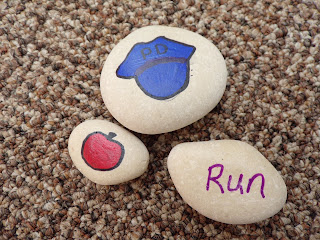 Just as we began this story, a young patron walked in with a rather agitated black tarantula named Wolfie in a jar, so he became the star.

Once there was a tarantula named Wolfie. Wolfie LOVED to hear stories, but he didn't know how to read! He tried walking up to people and asking them to read him a story, but as soon as they saw him, they all yelled "RUN!!!" and ran away. Wolfie was very sad.

One day, he crawled into a big stone building, and wandered until he came to a nice, quiet office. He crawled up on to the desk, and found someone's lunch spread out on it. He decided to hang out on the apple for a bit, because it was so pretty and shiny.

After a bit, our new Police Chief, Mr. Peete, came in and sat down. He started looking over some paperwork, and without looking he reached out and grabbed...

ALMOST grabbed his apple, but just in time he realized there was a spider on it! Now, being the Chief of Police, he couldn't very well go tearing down the hallway screaming, "RUN!!!" So he took a deep breath and asked Wolfie WHAT he was doing on his APPLE.

Wolfie explained that he was just looking for someone to read him a story. Mr. Peete told Wolfie that he knew just the place for him! He got his little friend River to bring Wolfie to the library, where he arrived just in time for story time!

(P.S. Wolfie is now living in a tank by my desk, where he hopes to hear many stories this summer. And Mr. Peete has been warned to check his lunches.) 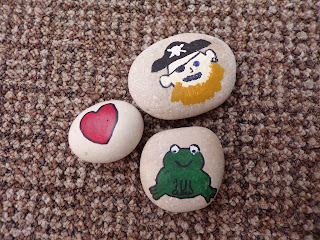 Once upon the time, there was a pirate...was he a nice pirate, or a mean pirate?

(Most of the group yelled 'mean', while a couple yelled "nice!")

MOST of the time, he was a mean pirate, but sometimes, secretly, he was very nice. And one day, that mostly-mean-but-sometimes-nice pirate fell in love with a frog.

Now, he could n't TELL anyone he was in love with a frog, because that would totally ruin his reputation as a mean pirate. So, he kept the frog in his cabin, and each night he would close his door, and he and the frog would play cards and chat all night.

Then one day, there was a terrible storm. The ship was rocking back and forth on huge waves, and then lightning hit the mast, and it caught on fire! Everyone had to jump into the row boats to escape. The pirate had a choice to make - should he leave the frog in his cabin, where it would surely die, or should he go save the frog - but then everyone would know his secret! What did he do?

(unanimous yell of "save the frog!")

Of COURSE he saved the frog! Love is way more important than worrying about what other people think of you! He ran back to his cabin, grabbed the frog, and jumped into the row boat with the other pirates.

They all stared at him in silence. He glared back at them and barked out, "WHAT?!" Slowly, they all reached into their pockets, and pulled out their own frogs.

See, sometimes, we aren't as different as we think. And sometimes, if we let people see what's really important to us, we can find we have a lot more friends to hang out with. 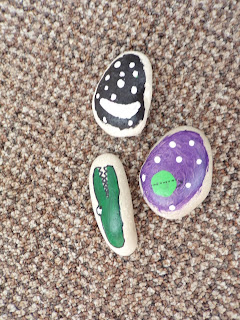 "What are the names for the different types of trees around the swamp?" he wondered.

"Can we eat them?" asked the other alligators.

"How do humans make those cars go?" Fred wondered on another day.

"Can we eat them?" the other alligators asked.

"Um...no," Fred answered (although there were rumors involving actual humans.)

One night, when the other alligators had all finished eating and were now fast asleep, Fred stayed awake looking up at the moon and the stars. "I wonder what stars are made of?" Fred wondered. Nobody was awake to say, "Who cares?", but Fred did hear a sound. (generic sound of spacecraft landing) What do you think it was?

It WAS a space ship! And the door opened, and what was standing inside?

(AN ALIEN! Description settled on after some discussion)

Fred and the alien introduced themselves, and Fred asked the alien what he was doing at the swamp.

"Well," the alien said, "I have so many questions about the world and the planets and EVERYTHING. But my friends always just say, 'Who cares?' So I decided to get into my space ship and see if I could find the answers myself."

"I know how you feel!!!" Fred exclaimed. "Only I don't have a space ship to travel in."

Well, of course, the alien invited Fred to join him. Did he go? Of course he did! And the blasted off into space to see what answers they could find to their questions.

The kids are planning a "Goodbye to Summer Party". This is Shane's menu: 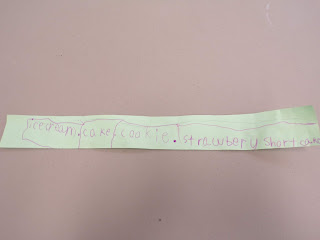