About 13 years ago, before I was married, my mother and I shared a home filled with critters, both 2- and 4-legged. One day she was picking up some puppies at Animal Control to transport them for a rescue, and while they finished up paperwork, she went back to visit with the other animals - as one does, of course.

Apparently, there were bets going as to how long it would take her to ask about the poor little puppy with the dangling, obviously broken leg. Because we NEEDED another dog, especially one that had obvious vet bills attached. But what could she do, just leave it to be put down? 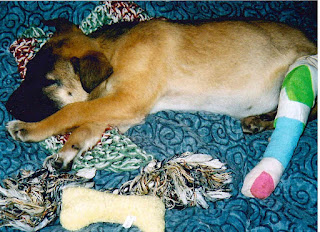 He had been found out in the desert, leg broken, dumped by someone we can only hope karma has caught up with.

How could anyone hurt this face? 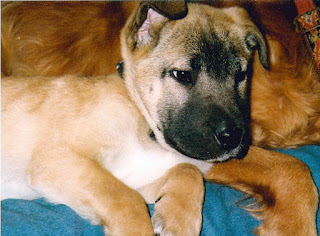 His leg healed up just FINE. If memory serves, this is a much younger version of our now-elderly golden, Emily, who he is chewing on: 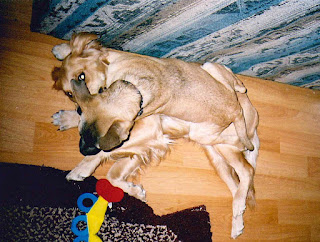 When we were sure he was ready, we found him what we THOUGHT was a great home - nice family with six kids who had been clamoring for a dog. A few weeks went by, and one day the mother mentioned to me, off-hand, that Dude had escaped from their yard and hadn't been seen in days. When our heads stopped spinning, we went to the pound and checked - sure enough, there he was. In fact, he had been set to be euthanized the day before - because no one had come looking for him - but they had been too busy.

He was...A PAIN IN THE BUTT! This poor puppy with the broken leg could scale a 6-foot cinder block wall like it was nothing. And man, could he run! The kids and I chased him literally for miles some days, in cars and on foot. He would dance around just out of reach, zig-zagging and sprinting ahead while we flopped onto our faces trying to grab at him. It was a wonderful game! We spent a stupid amount of money adding angled sections to the tops of our walls, so they resembled a prison of some sort.

He also liked to dig just a bit. 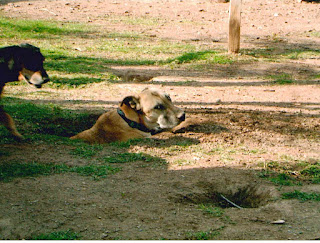 On the plus side, he showed his nursemaid tendencies early on. Sitting with the old dogs to keep them company, 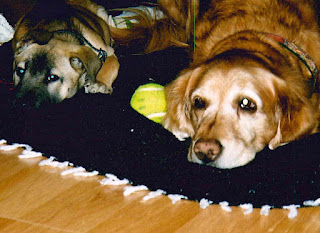 and treating the little ones gently. 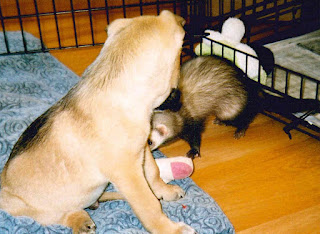 He was very protective of 'his' babies - that's him a bit bigger now, on the far right (and Christopher, a lot smaller, in the green sleeper!) 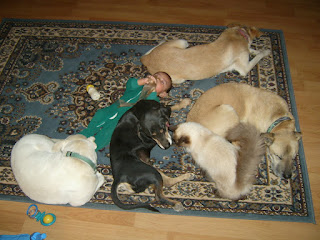 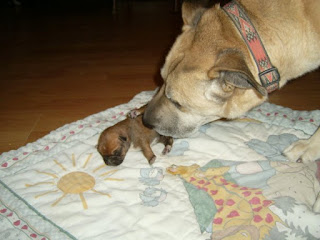 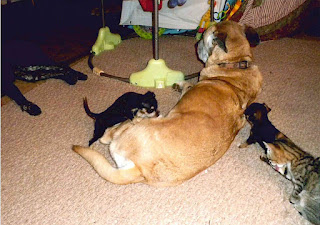 Somewhere along the way he got the nickname "Bubeleh", a Yiddish term of endearment. I am not Jewish, I have no idea where the nickname came from, but it stuck. 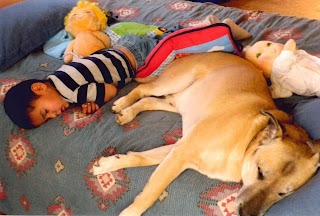 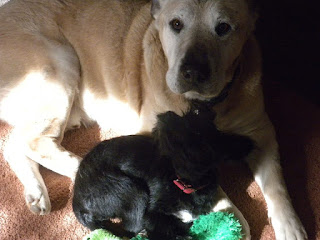 A bit more grey in the face, 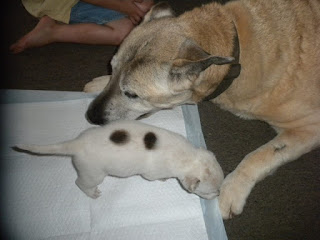 not quite as fleshy. 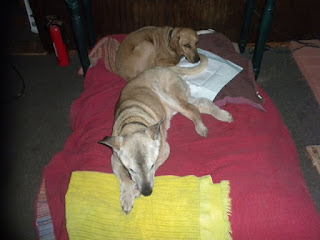 Now it was crazy young Scarlet's turn to keep him company.

A couple weeks ago, I brought in the latest batch of puppies to be fostered, and Dude struggled to his feet to do his mandatory inspection. That was the last time I saw him stand up.

We all told him it was okay, he had more than done his duty, and he could rest. He got lots of pats and hugs, and then Saturday, two days before what was to be his final vet appointment, he slipped away quietly.

We have said goodbye to many animals, but Dude was definitely a special one, to countless orphaned puppies and kittens (and on more than one occasion, rabbits), as well as to us. He will be greatly missed, but we are thankful to have so many memories with him. All because Mom had to go back and just say hello to those other dogs...

Email ThisBlogThis!Share to TwitterShare to FacebookShare to Pinterest
Labels: death of a pet, dogs, Home Life