If you grew up on Sesame Street like I did, then Ernie's voice singing that song is now stuck in your head. Just in case it isn't:
You're welcome.
S. is working on the letter "D". It has been going a bit slowly, because I only do 'school' when she asks for it. I am not about to interrupt independent play to force a learning activity she isn't interested in! We have had some fun with the letter this weekend, though. We had donuts for breakfast (after which L. ran around the house wearing donut crumbs and little else, yelling "Crazy! Crazy!"), and made a couple different desserts.
S. chose "dinosars" from the word list we have been making, and dictated a 'story', then illustrated it with paint pens. 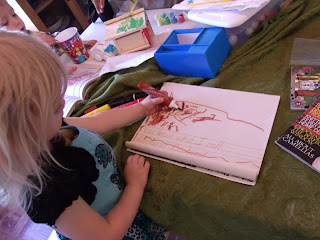 "You know what I call dinosaurs? Cookies!"
Three-year-old humor. I don't get it, but that's okay.
Of course, if S. painted, everyone else had to. 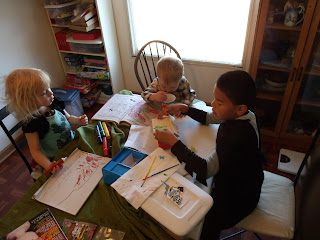 C. is painting the birdhouse he made after reading these books. L. is painting with water, whch is only going to work for a short time longer I'm afraid. 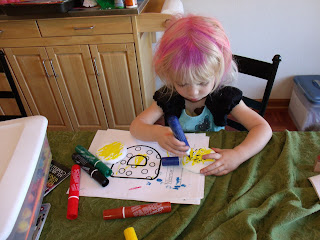 S. also made decorations for Daddy. 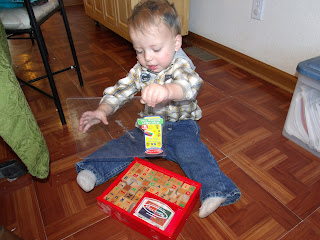 L. decided to teach himself the whole alphabet at once.
We played with dress-ups. 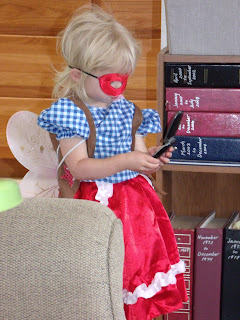 Okay, that's a constant here, but it played in nicely. 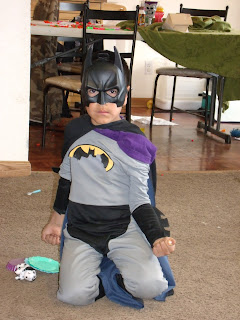 We dug in the dirt. 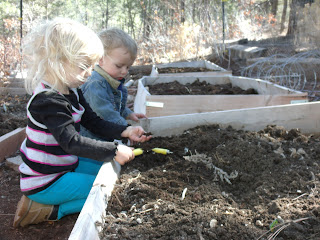 This is S. and L.'s garden. She says she is going to plant flowers and horsey food.
We also colored our hair. For absolutely no reason other than someone noticed the hair colors and said, "hey, let's do that." 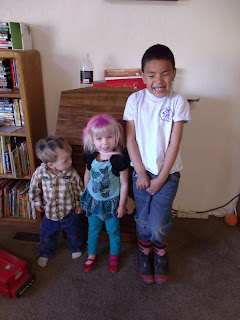 C.'s didn't show up well in that picture, so here's a close-up: 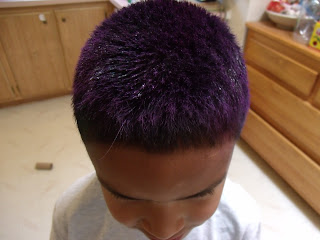 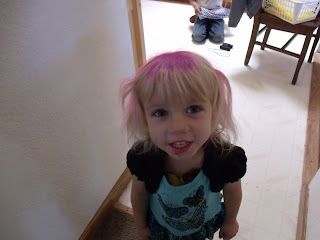 S. has taken to shoving dolls and stuffed animals up her shirts and telling everyone she has a baby in her belly. Just to clarify, that is not anything she has heard at home recently.
We read books about dolphins, drums, dancing, and dentists. We went to see the doctor, but that was with a case of pink-eye, which does NOT start with "D".
We played with the dogs. 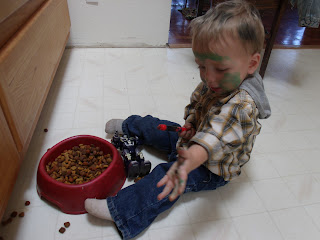 And the dog food.
We talked a bit about what is in a desert, and I had a cut-and-paste paper to go with it. 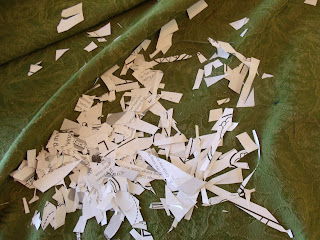 We got a little carried away with the "cut" part.
We made a dazzle jar. 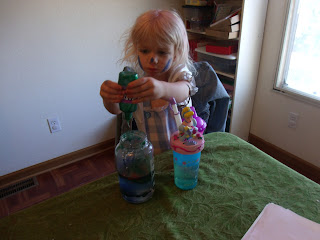 Or a dream jar. We haven't quite decided. Basically; clear glue, glitter glue, glitter, and water. And a toy your brother threw in before you could stop him. Seal the jar, shake it up, and watch it settle. 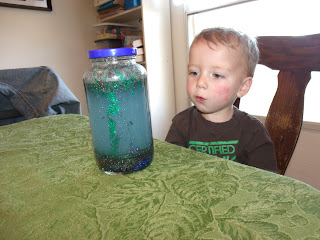 L. was especially fascinated, and just sat and stared forever.
We watched "How to Train Your Dragon, and made dragon crafts.
Lastly, we popped in a season of The Muppet Show and danced along with the songs...
...and now, we're Dee Dee Dee Done!