Summer Reading Program, Week...wait, what week is this?

Well, we thought things might slow down a bit ﻿when the community pool reopened, but if they have, I sure haven't noticed it! At the end of June we were almost out of prizes, and had run out of almost every size of t-shirt. I breathed a huge sigh of relief when it was July, start of the new fiscal year, and we could order again!

Then a week went by, and we ran out of Child Smalls. And the prize box started to go low again. Sigh. The first problem is, we make our initial order based on the previous year's numbers. As you may recall, I had a baby in the middle of last year's program, so our numbers were a bit fuddled, and I was working off the wrong ones at first.

Then when we get partway through the summer, I make a second order based on the kids who have started earning prizes, assuming most of them will earn their shirt by the end of the program. Second problem: large groups that have not turned in a single book log yet, coming in and saying, "Hey, our 22 kids read 36 books each!" Let me be clear, that is a GOOD problem, and I love when they do that - I would much rather have that happy surprise than order shirts for a group that swears they are going to do the reading and then never does. But, 22 kids x 9 prizes + 22 shirts + 22 books + 22 Blue Stone coupons = another rush order to Oriental Trading. And right after I boxed up their prizes, a teacher with 20 kids came in. They 'only' earned 5 prizes each.

The third problem: These darn kids just keep reading! They aren't stopping when they get their shirts, or slowing down as summer ennui sets in. They are taking books on their vacations, and reading before and after going to the pool. Don't they know they are supposed to be playing video games and watching TV??? After all, nobody reads books any more, they said so on CNN!

Anyways.
Program-wise, the first week of July was comparably relaxing, with Wednesday off, and no program on Friday. The teens even had an easy night, watching The Princess Bride (can you believe some of them had never seen it?!)

This week, we have been reading/crafting about Things That Go Bump in the Night. Lots of silly monster stories, and cute monster crafts. The Tweens held a murder mystery, and we actually have some pictures from that for a change:

We have some very blurry tweens. It's not the camera, they just sort of vibrate all the time. Cliff does a fantastic job with this age group! This Spring was the first we have been able to offer something for them.
The Teens had a Zombie Apocalypse Survival Training. And, as usual, my camera battery ran out right at the start, so all I got were some photos of the head shot practice: 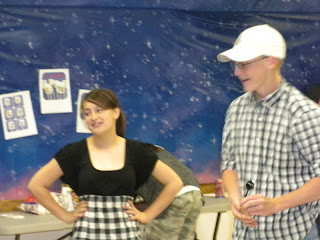 We threw darts at a zombie head target, and shot suction-tipped bullets at Justin Bieber. You remember our old friend from the pajama party? 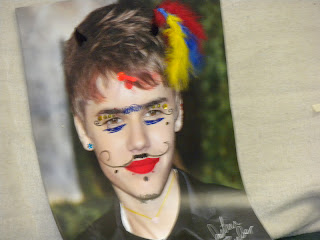 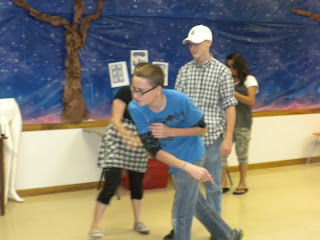 G. had some aggressions to get out. His darts kept going through the pizza boxes behind the zombie head. E. was no sluch, getting some stuck in the table everything was propped against. They'll be okay when the apocalypse comes.

It didn't take too long for the teens to talk me into putting Justin on the pizza boxes. He's looking a bit...aerated these days.

We also watched this video (very informative!), made zombie pops, played hot potato with a severed head, and played spin-the-body-part with the legs you see in the picture above. No, there was no kissing - if her toes were pointing at you, you had to answer a question from this book:

Would you rather lick the bugs from a windshield, or drink sweat wrung from a basketball player's underwear? Yeah, we all went with the bugs, too.

Friday we saw the return of Markie Sholz and Dragons are Too Seldom Puppets. We've had Markie several times, and she is always a big hit. Unfortunately, the kids and I were unable to make it, but a few people did show up:

Around 200, I'm told - they didn't all fit into one picture:) I love doing programs out on the lawn; the shade keeps it relatively cool, and it's just such a fun atmosphere. Thanks to Cliff for handling everything!

Email ThisBlogThis!Share to TwitterShare to FacebookShare to Pinterest
Labels: At the Library, Dragons are Too Seldom Puppets, library programs, summer reading, teenagers, zombies