Last week, M. had her turn to have her friends over. A few girls spent the night, and they decided to make it a zombie apocalypse party. M. is a pretty tough girl, but zombies and spiders are two things that creep her out...which made it really easy to mess with her.
As soon as the little ones were in bed, the girls popped Dawn of the Dead into the DVD player...and Daddy popped the FoxPro into the corner. For those who don't know, this is a nifty little device used to call predators in by playing sounds like distressed prey at a very loud volume. It comes with a remote. Which Daddy pressed at a tense moment in the movie. (Note to self: buy sheetrock to fix hole in ceiling).
That got such a good reaction from M., her friends decided to get in on the game. Two disappeared into the bathroom, then came up behind M. in the dark looking like this: 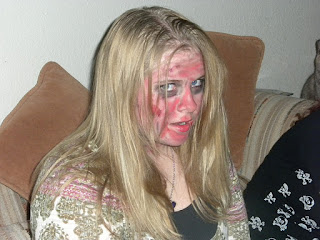 Looking lovely as ever, H.!
After the movie, they hid in M's room, and showed that the movie had done nothing to damage their fragile psyches by playing with dollies like the sweet little girls they are: 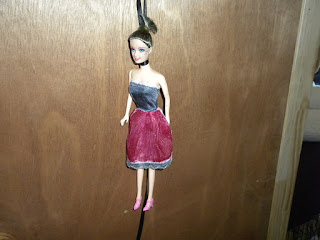 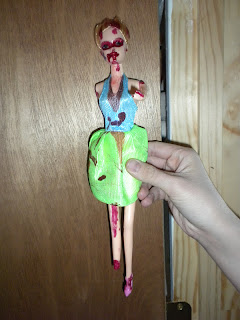 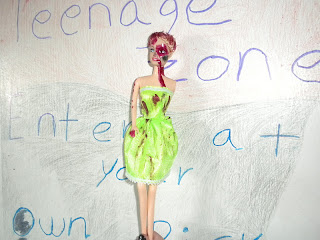 (Another note to self: up M's medication.)
They watched another movie, a much cheesier one, the next morning. The littles were up, but running in and out, so I didn't think they saw much.
Until S. started attacking people with an electric mixer. 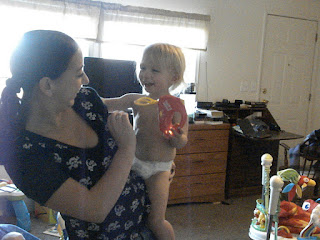 And trying to chew their faces off. While saying, "I eat your brains!" I'm sure that's just a coincidence, though, and has nothing to do with the movies.
Posted by Ami at 7:10 AM