Just a few pictures before I go in and tackle putting everything away. We had our annual Family Fright Night here at the library last night. Normally we do a start-to-finish program where families come in and sit down, hear some scary stories, then do a craft and munch on snacks. Basically, story time plus food. This year we ran it more like a come-and-go carnival, and I think it worked very well that way. We had four games: 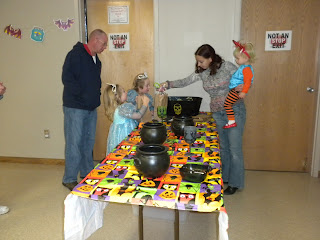 Ghosts and Goblets, run by M. here. You got a handful of little foam ghosties, and had to 'fly' them into the goblets and cauldrons. 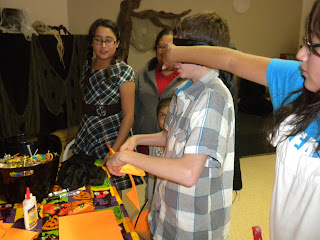 For this one, run by Miss Monica in the red and grey, participants had to draw and then cut out a jack-o-lantern - while blindfolded! The girls here were convinced their brother was cheating, because his turned out so well. They spent the rest of the evening returning to this table, to see if they could do better. No competition there, no sir! 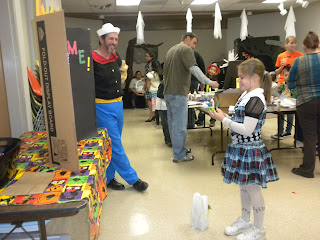 You can't see it in this picture, but there is a giant monster head with an open mouth, and kids had to 'feed' him by tossing bugs through it. And doesn't Mr. Cliff look smashing as Popeye?
Somehow I managed not to get a picture of the Bat Races, led my Grandma Kathie. Two kids at a time had to hold a paper bat by sucking it through a straw, while they raced around a set of cones. At least one person took straws and bats home to practice with afterward.
We also had a craft - paper bag monster puppets, supervised by Miss Clara: 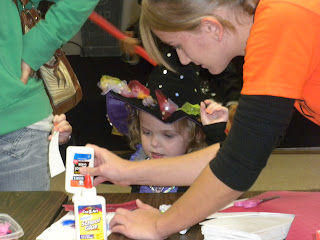 You can't see her shirt and necklace here, but fortunately I thought it was so cool the first time I saw it, I took a picture then: 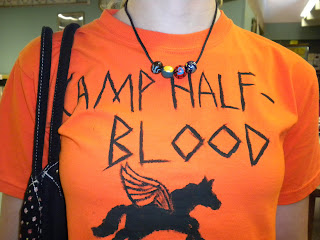 Aren't the beads awesome? She made them herself!
And, of course, we had to have scary stories: 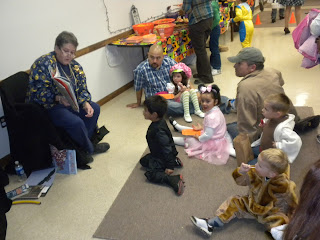 I usually hate to turn the story-telling over to anyone else, but Miss Jane is a retired children's librarian, and quite competent. This freed me up to greet people, take pictures, and handle potential crises like: 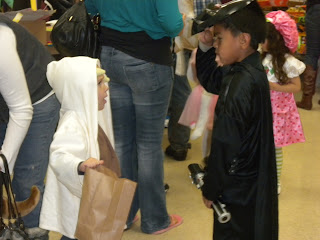 Yoda and Darth showing up at the same time. I totally love this picture. 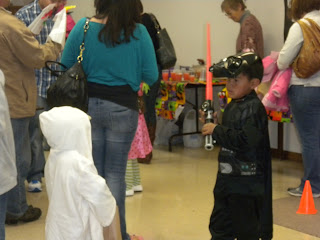 They never spoke to each other, just moved into battle positions. So, being a good Mommy, I snapped the picture before calling out, "Don't even think about it!"
We had the perfect sized crowd, enough to keep things busy, but not so many they were stepping on each other. Everyone seemed to have a good time, and left tired and full of candy. 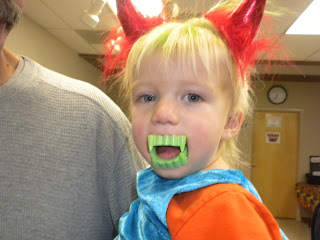 Or, just tired - so tired, his antennae are drooping. Candy next year, sweetheart!
Posted by Ami at 9:03 AM

Email ThisBlogThis!Share to TwitterShare to FacebookShare to Pinterest
Labels: At the Library, Halloween