Just a little bit of snow in the mountains this week, but plenty of it at the library. Fortunately, none of ours was cold! Here are the six stations we explored for this week's Toddler STEAM. 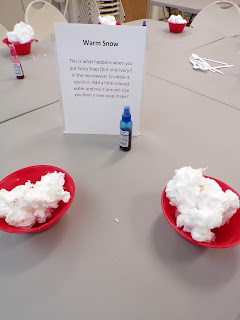 ***This only works with Ivory!
Ivory snow is made with lots of air pockets inside, so when you put it in the microwave, it puffs up like a cloud! I put a bar in for a minute on a paper plate, scoop off the puffy stuff, then do the remaining bar for about 45 seconds. One bar fills four bowls.

The spray bottles have liquid watercolor - that isn't supposed to stain, but we moms know not to trust that, so I also had t-shirts to plop on over the kids' clothes. 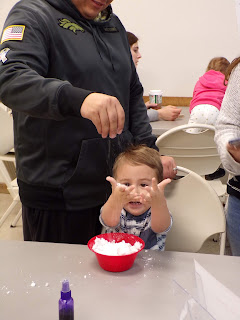 And adding color them mixing and squishing makes it a multi-sensory experience: 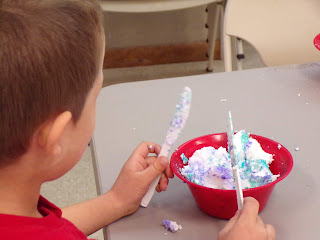 It even smells great! 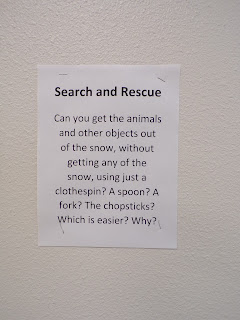 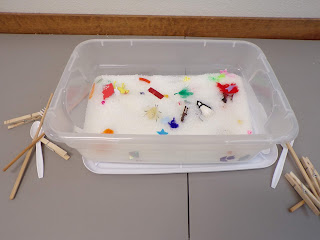 The 'snow' is those little plastic beads used in decorating or stuffing toys. Up on a table so littler ones can be monitored - not toxic, but we still don't want them eating a handful. Of course, it didn't stay on the table! So glad I don't have carpet in there and I can just sweep things up!

Snowstorm in a Jar
(properties of air and liquids, bouyancy) 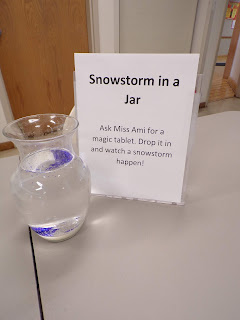 The 'magic tablet' was a quarter of an Alka Seltzer (generic works fine). I kept those in a pocket in my apron, since they are a medicine. The jar is filled with baby oil, then I mixed a little bit of white paint with water and poured it in, and added a little glitter because glitter makes everything cooler.

When you drop the magic tablet in, it falls to the bottom and starts creating bubbles. The paint attaches to the bubbles, and gets carried to the top. At the top the bubbles burst, and the paint drops back down, so it looks like it's snowing! 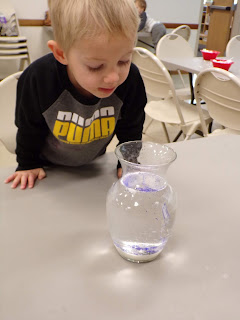 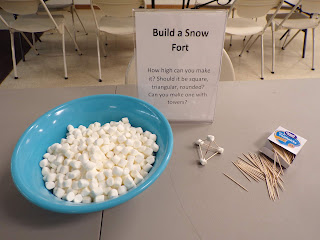 I encouraged making tall structures so then we could talk about the importance of a wide base. New marshmallows fresh from the bag each time, because you know there will be some eating going on! 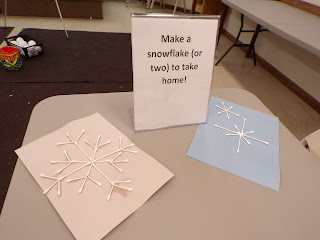 At first we tried cutting the Q-tips in half for smaller pieces, but we quickly discovered it was much easier to just snap them in half by hand. Some of the adults really liked this one - art is relaxing, and a little bit of symmetry during a crazy holiday season goes a long way!

I went to Walmart looking for giant pom-poms, and actually found these marketed as indoor snowballs - a box of 20 for $9.96. Slightly heavier than pom-poms, but still safe enough to throw at each other. I had small buckets to spread around and try throwing into. A couple little ones tried to see how many could fit into one bucket, which of course led to counting skills and spatial relationships. 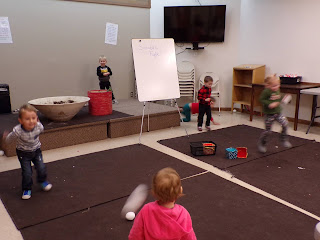 This was the least-blurry picture I got of children I had permission to photograph. It got a little crazy! That young man in the red has quite an arm - he got me from halfway across the room!

While I normally encourage playing outside, this is my favorite way to play in the snow. Thanks for joining us, everyone!

Email ThisBlogThis!Share to TwitterShare to FacebookShare to Pinterest
Labels: At the Library, snow, STEAM