When school is out, the Children's Room tends to be busier than usual, so I really have no business taking my vacation during those times. I did anyway. I took the whole week between Christmas and New Year's off, planning to spend as much as possible of it on the kids. Of course, I'm not completely crazy, and I knew it would be a good idea to plan some actual activities to keep us all busy.

Thinking ahead to taking a whole week off, and realizing the a) C. would have already been out of school for over a week, b) He would still be hyped up from Christmas and driving me crazy, and c) I miss half the birthday parties, when you get to talk to other mommies, because I have to work, I decided to invite everyone in the school over to play for an afternoon. That's a lot less daunting when you live in High Rolls, and there are only 20-odd kids in the whole school.

Tuesday was the day, and S. decided to dress up in honor of the occasion: 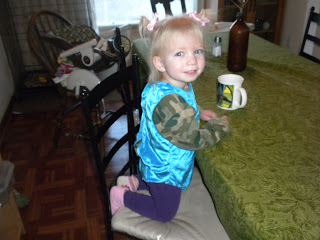 Unfortunately, that was also the day half the families were out of town (or had discovered an electrical octopus in their under-construction bathroom), so we just had two families show up. They had five boys between them, though, so that was good for a few smackdowns. 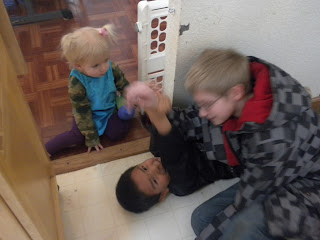 Love how S. looks like she's refereeing.
What's funny is that I didn't even have any Mommies to talk to - both sets of kids came with their dads. We had a good time, though!
When we cleaned up after Christmas, I put a few things aside to space out over the rest of the week. There were puzzles: 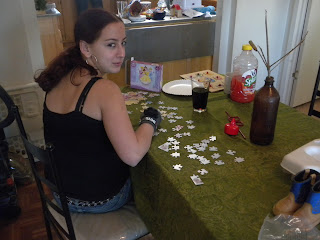 With pieces missing. She was not amused.
Videos to watch: 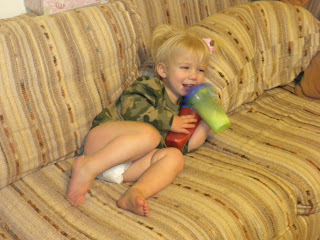 My two-fisted drinker.
And race tracks to try out: 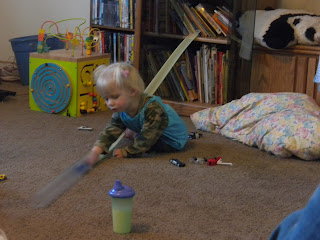 We also have a few art/science projects set up. Today I took all the Christmas decorations down, and to fill in the empty spots we started borax crystal snowflakes/icicles. All you need is: 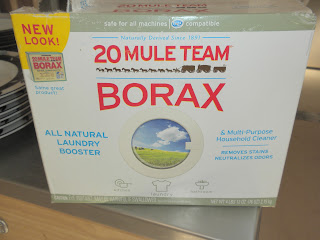 Borax (find it in the laundry aisle) and boiling water (figure one spoonful borax to one cup boiling water). You will also need containers to put the solution in, pipe cleaners or string for the crystals to adhere to, food coloring if you want, string or fishing line, and pencils or other sticks to suspend them from.
The preparation can take a while, if your kids are too little to tie thread, cut bottle tops off, etc. Hang your icicle or snowflake base from the sticks, so that they will hang inside the containers without touching the sides: 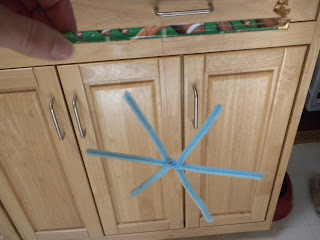 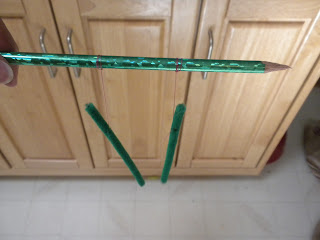 Measure your boiling water as you put it in, so you know how much Borax to use. A word of warning, the first bottle I poured water into curled at the top (the yellow one), and since I had filled it pretty full, I had a mess to clean up! 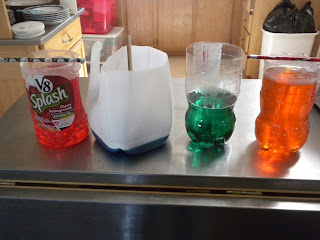 I was still boiling more water for the blue and green at this point.
Then you wait! I got C. to sit and watch for a while, but finally had to admit that it wouldn't happen today:) Hopefully, tomorrow morning we will have little colored crystals growing on the pipe cleaners. That, or we will have four stupid cats covered in colored Borax solution, and another mess to clean up.
Other plans include making fantastic structures out of marshmallows and toothpicks, and making our own books. What about you guys? What creative (and cheap) ways do you have to occupy your young 'uns? Come on, I have 5 more days to go!
Posted by Ami at 6:34 PM