Okay, so, the crystals are still growing. Partly because C. isn't happy with looking at them from the side, and keeps pulling them out of the water, causing them all to fall off the pipe cleaners, even though I keep telling him NOT TO TOUCH THEM. Technically, he is touching the pencils, not the pipe cleaners. I probably should have been more specific. Anyways, I can't get the camera to focus on the pipe cleaners inside the water, so you'll have to trust me on this one.

Today I was continuing in the cleaning and organizing mode started by taking down Christmas decorations, and I started on the refrigerator. It drives me crazy when a package is opened, the contents are partly used, and then the rest sits there forever. There were four slices of sourdough bread left in a bag, so I toasted them and added them to the bread crumb bag I keep in the freezer (also storage place of loaf ends, which are perfectly good for sandwiches, and which everyone swears they use, but which still mysteriously fill the second shelf of the refrigerator. Three or four bread loaf bags, each with two end pieces, conscientiously twist-tied shut.)

And the tortillas. Many many bags of both corn and flour tortillas in varying sizes, all opened. We already have enchiladas in the freezer, so today we had chicken and cheese quesadillas for lunch (using part of the leftover chicken, double points for me), then I made one whole package into quick snacks. Just slice them up, spray on some butter, and sprinkle with cinnamon and sugar: 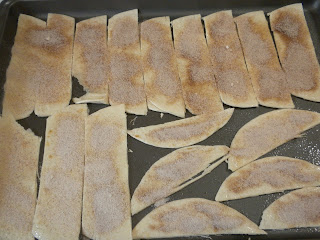 Then toast for a few minutes at 350 degrees, and you have sweet crispy treats. You could probably try other toppings (think anything Doritos uses). I may do that tomorrow, since I STILL have flour tortillas left.
A half bag of stale marshmallows, and the toothpicks left from making Buckeyes (am I cheap, or what?) became an art project. 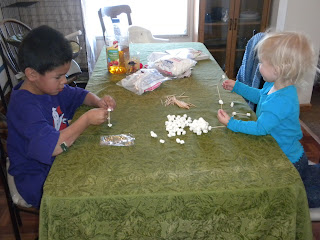 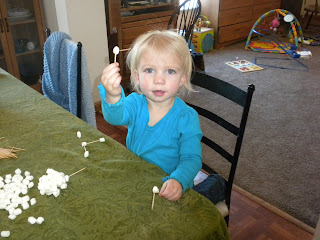 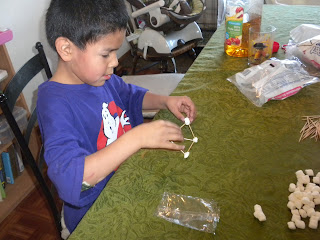 I have no idea what S. was making, but here you can see C. building a Star Wars ship, which was followed by several men holding light sabers. Eve.Ry.Thing. has to do with Star Wars these days. Everything.
We also went outside to play in the melting snow. S. trucked around through snow and slush and mud, scooping bits up in her bare hands, then you could see her face suddenly register the lack of feeling in her fingers. "I'm cold, Mommy! I'm cold! I need my blanket!" (stiff-walking toward me with her hands held straight out). She has the exaggerated shiver and chattering teeth down quite well, and was doing it for Daddy long after everyone was toasty warm again. 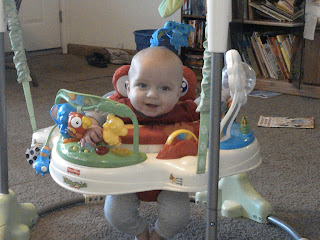 L. mostly just hung around all day. Oh, except for the time he was sitting in his chair, and pooped all up it. My day would be empty without at least one load of laundry. Look at those thunder thighs! Can you believe this is the same little stick-legged boy from a few months ago? 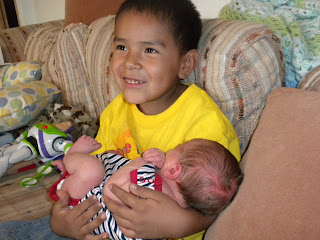 In case you've wondered why M. is not in any of these, she has been out for the past couple days. She's home now, and we are planning a zombie apocalypse sleepover. Either tomorrow or Sunday. Or some other day. We don't like to overplan.
Posted by Ami at 7:07 PM

Email ThisBlogThis!Share to TwitterShare to FacebookShare to Pinterest
Labels: Christmas, Home Life, In the Kitchen