I made too much food.

I ate too much food.

The menu, with notes for future reference:

1. A 20 lb turkey in the electric roaster, with The Pioneer Woman's brine. I didn't really want to brine it, but I wanted a little flavor, so I made the brine with just a tiny bit of salt. I poured it over the turkey in the roasting pan and put it in the fridge all night, then just cooked it that way. I was a little nervous about a new-to-me recipe for the main part of the meal, but it was the best turkey I have ever made! I love the electric roaster, because it cooks faster and keeps the turkey moist, but this was beyond moist, with just a hint of the flavors. Perfect!

2. Also from the Pioneer Woman, Cornbread Dressing with Sausage and Apples. I have made this for several years in a row. Since I had several guests coming and didn't know if there were any allergies, I left out the mushrooms. I only had 3 apples (from Bountiful Baskets) as opposed to the 5 called for, so I added some sauteed celery for more crunch. Yummy!

3. Soul Sweet 'Taters from - you guessed it - The Pioneer Woman (maybe she'll just come cook for me next year?). For the topping I sprinkled chopped pecans and then brown sugar, and ringed it with mini marshmallows - but then in the baking the marshmallows completely melted away! Tasted fine, but not a huge hit - Mike doesn't like sweet potatoes, and I have the feeling it wasn't a favorite of anyone else, but not the fault of the recipe.

4. Mashed potatoes from - me. Red potatoes (from Bountiful Baskets) boiled and mashed, leaving lumps because I like it that way. One package cream cheese, the last half cup of whipping cream that was in the carton, sour cream, and beef broth because I ran out of chicken. Then I put a stick of butter in a crock pot and put the mashed potatoes on top to stay warm. When I stirred them later, all the melted butter pooled up on top....mmm, feel those arteries hardening!

5. Garlic green beans - canned from Bountiful Baskets months ago, added some minced garlic and just warmed in the crock pot.

6. Back to The Pioneer Woman for the Broccoli Cauliflower Casserole she posted this week. A last-minute addition because it looked so yummy! I didn't have bread crumbs, so I used crumbled corn flakes, and I added a few drops of hot sauce to the cream sauce for a little kick. Yum! Not too many leftovers.

7. Two dressings - a cranberry/apple/pear sauce I made from Bountiful Baskets offerings last year, and...here she is again...PW's Homemade Cranberry Sauce. OMG...I can't believe I ever served that canned stuff before...I could have eaten just a whole meal of that!

8. Corn pudding from Allrecipes.com - very rich and creamy. It didn't look like enough, so I doubled it, and got way too much. I was running out of baking dishes! It also looked too runny at the start, but thickened up just fine.

9. And...seriously, I do know how to cook, but I also know enough to copy a good cook...PW's Whiskey Glazed Carrots. I used rainbow carrots from...of course...Bountiful Baskets, and the different colors really gave it some contrast to all the browns and oranges.

10. Hot cider - one part cranberry juice to two parts apple juice, toss in a crock pot with cinnamon sticks, whole cloves, and whole allspice. If the kids weren't drinking it, I'd add red wine. Just let it simmer and dip into it all day.

So, that was the food. No special decorations, except for these napkin and silverware holders: and these treat cups the kids made: 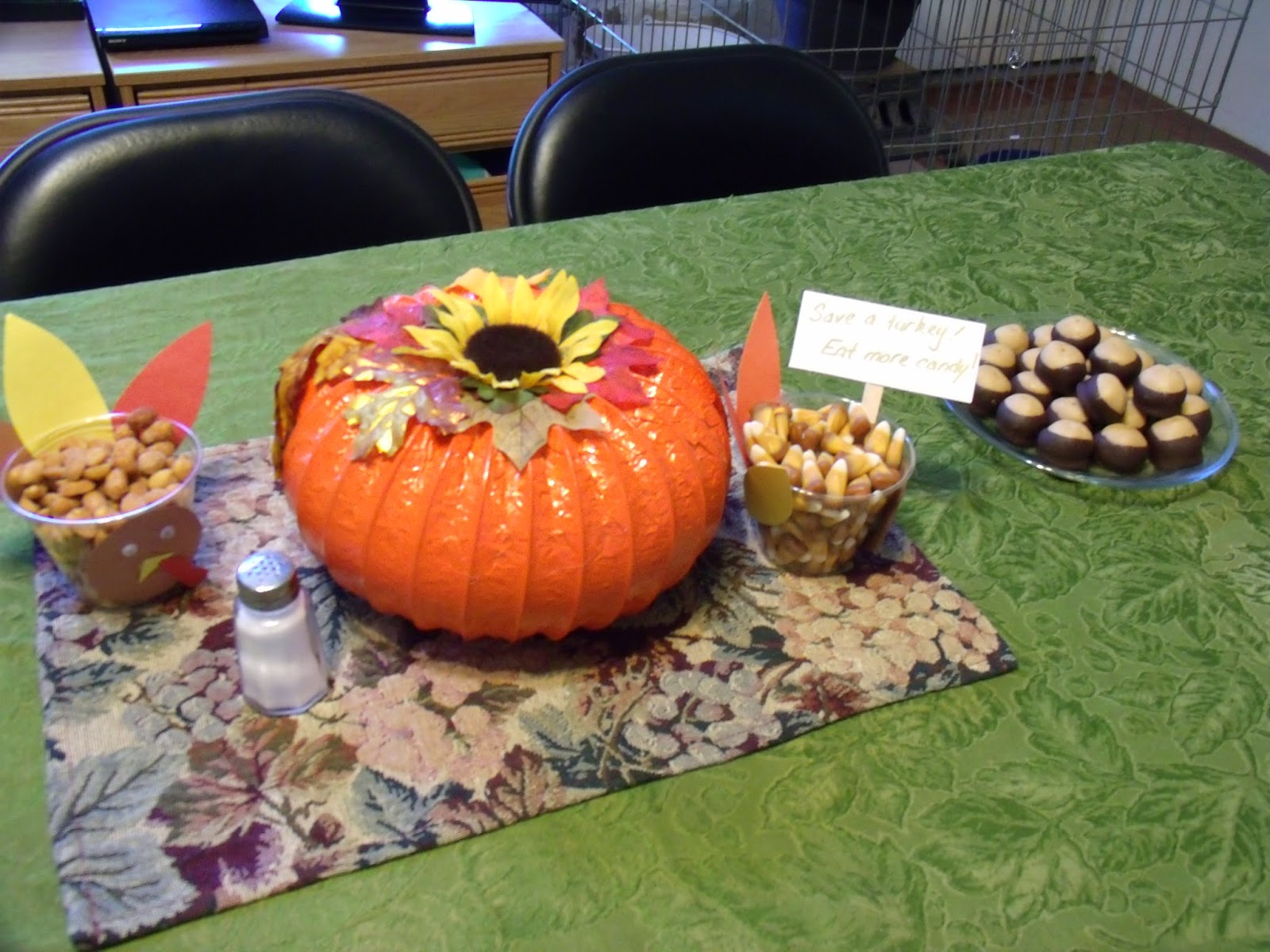 with centerpieces Christopher made at school. 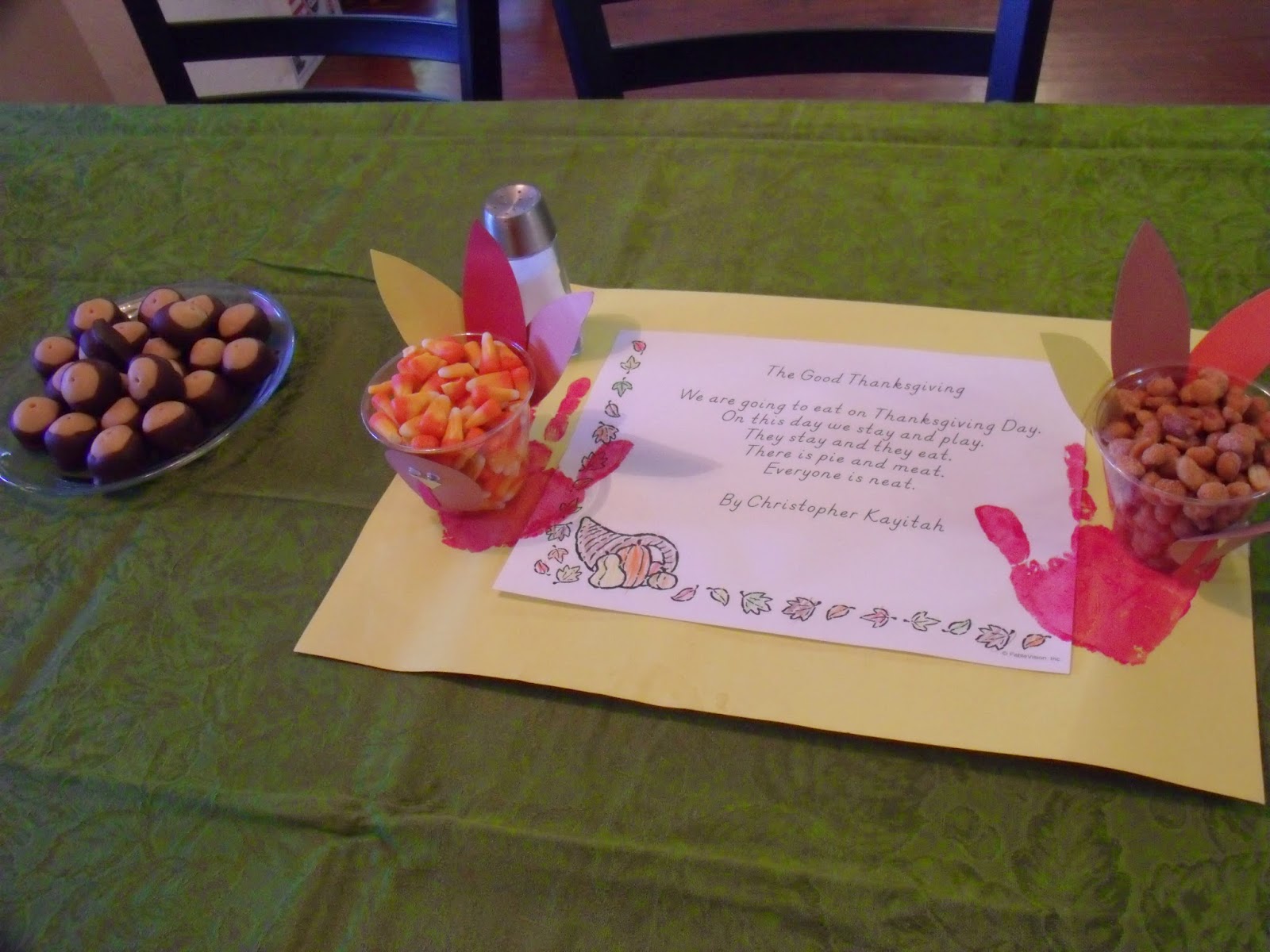 But the best part was the friends and family! We had Grandma, Mykela, and her fiance Bradley, then two of Bradley's friends, a really sweet couple, and our friend Felicity, her husband, daughter, and mother. Felicity just became an American citizen a couple months ago, and her mother was visiting from New Zealand, and this was the first American Thanksgiving for them both - extra special! This is what the holiday is all about for me, the people, so I am so glad they could all join us. 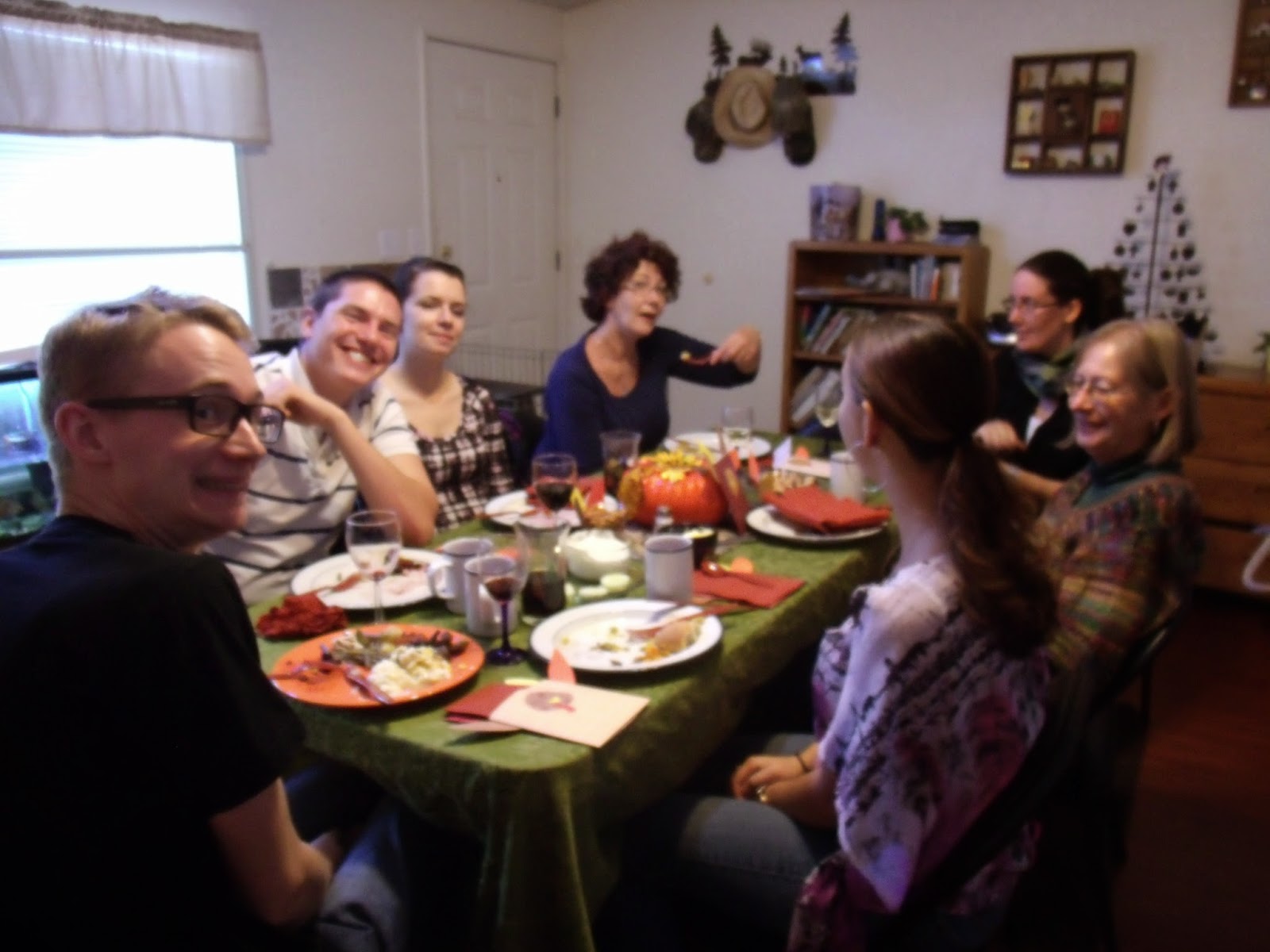 There were several desserts, but Felicity brought a traditional NZ Christmas dish called pavlova that was definitely the hit of the day! Sweet, but incredibly light - which just means you can eat tons of it:) 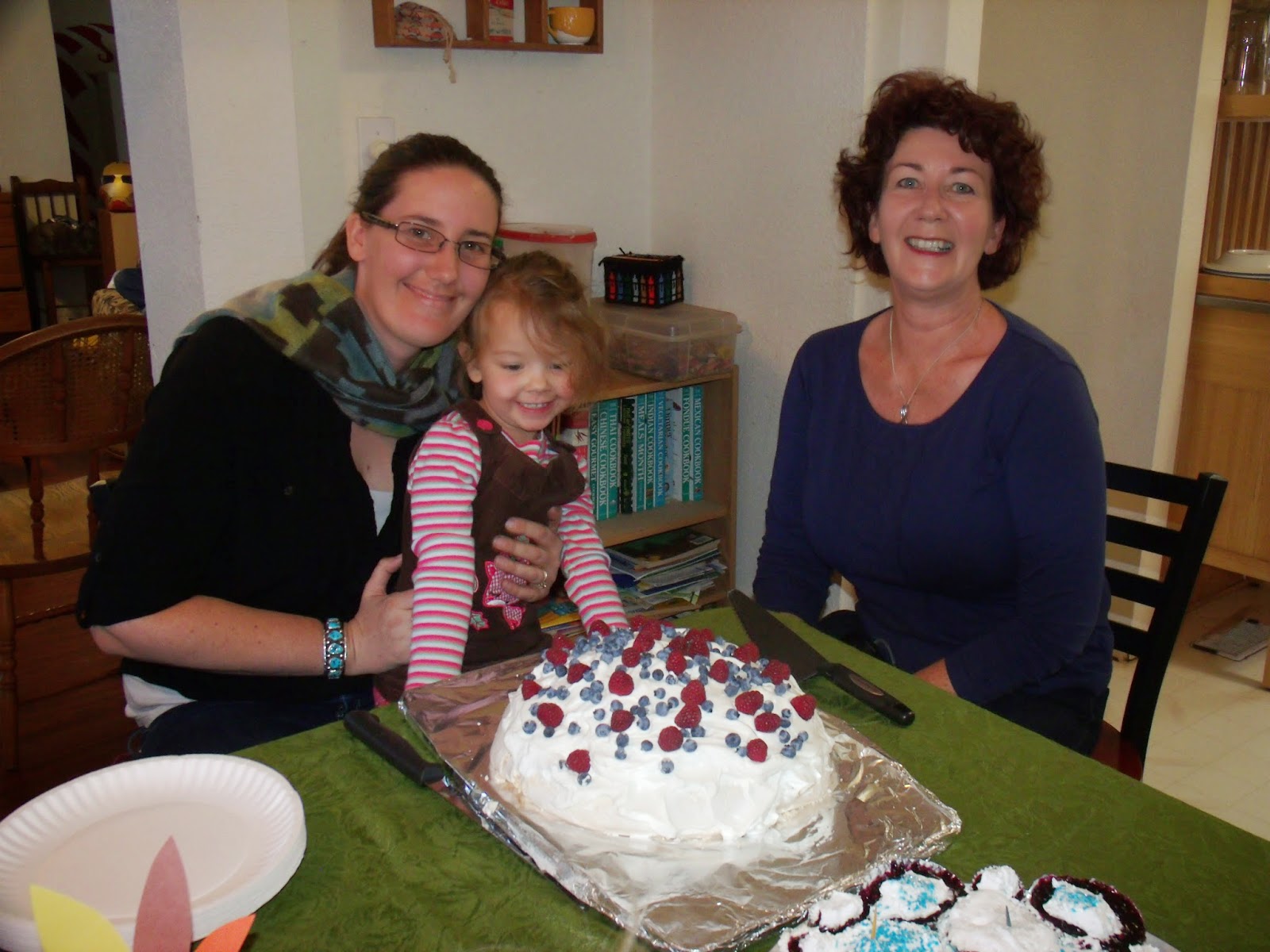 Which I did. Along with tons of everything else. I wasn't alone: 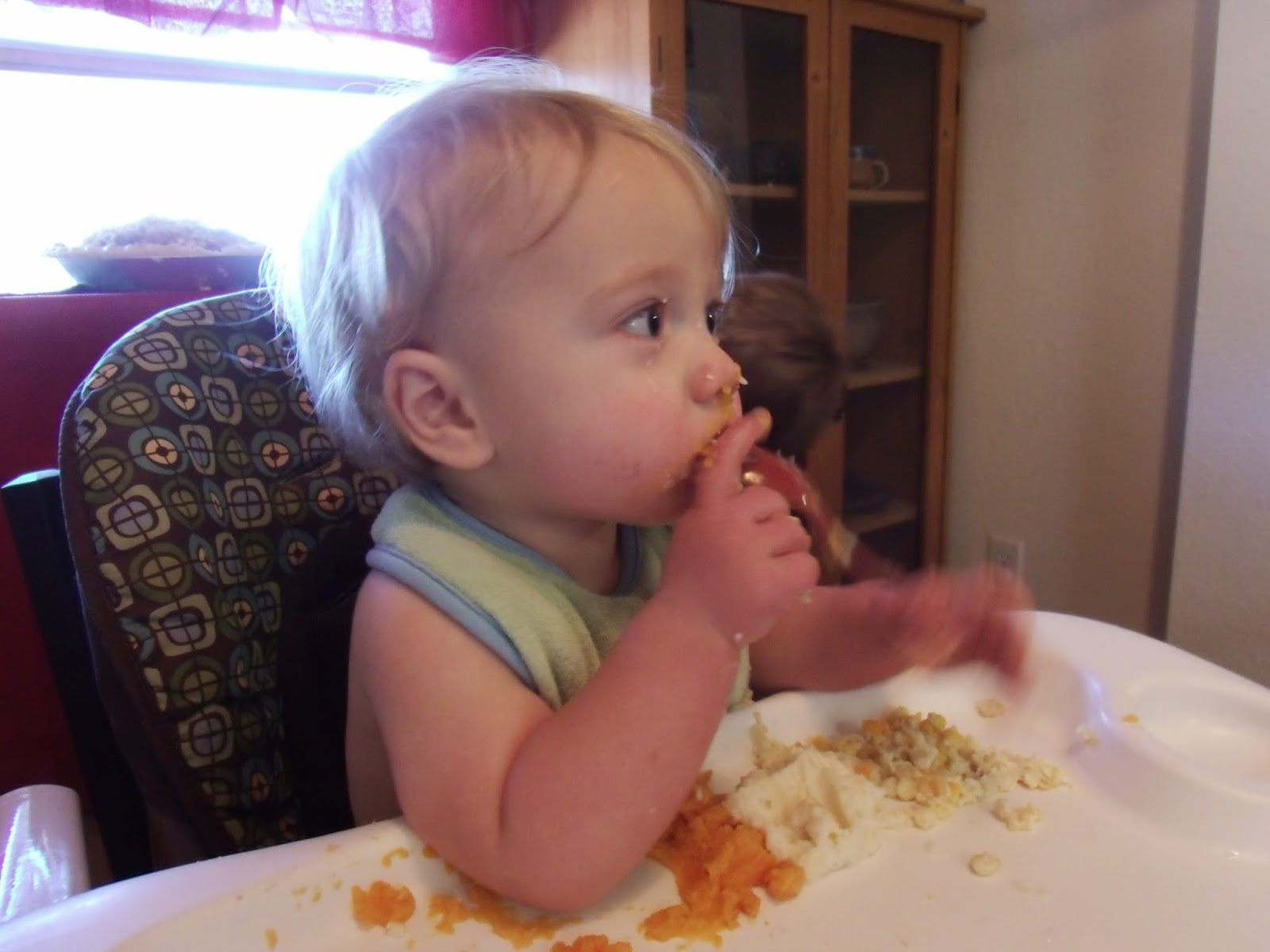 so, if you'll excuse me, we are all going to kick back with the traditional video and enjoy our food comas! Hope you had a fantastic Thanksgiving also, and remember: don't shoot your eye out!