I was very happy to have Valentine's Day off this year - I always seem to end up working, and it has been a while since we had a 'fun day', so this worked out well. Unfortunately, Daddy and M. had to be out of town - after seeing pictures and videos on Facebook, however, they may have felt lucky to have escaped the mayhem.
To plan for the day, I focused on things we love: glitter, and messes. We started by thinking of others, though: 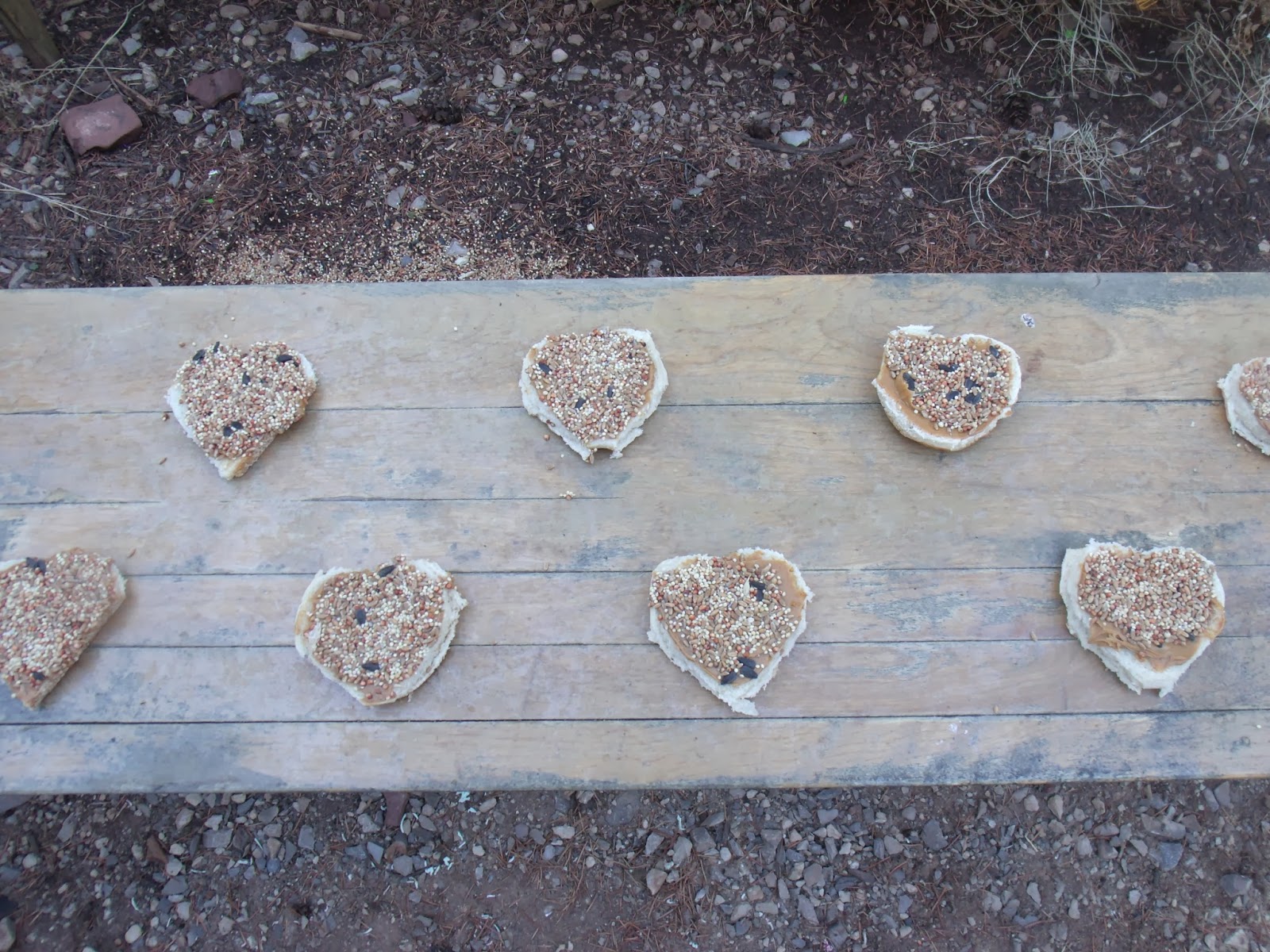 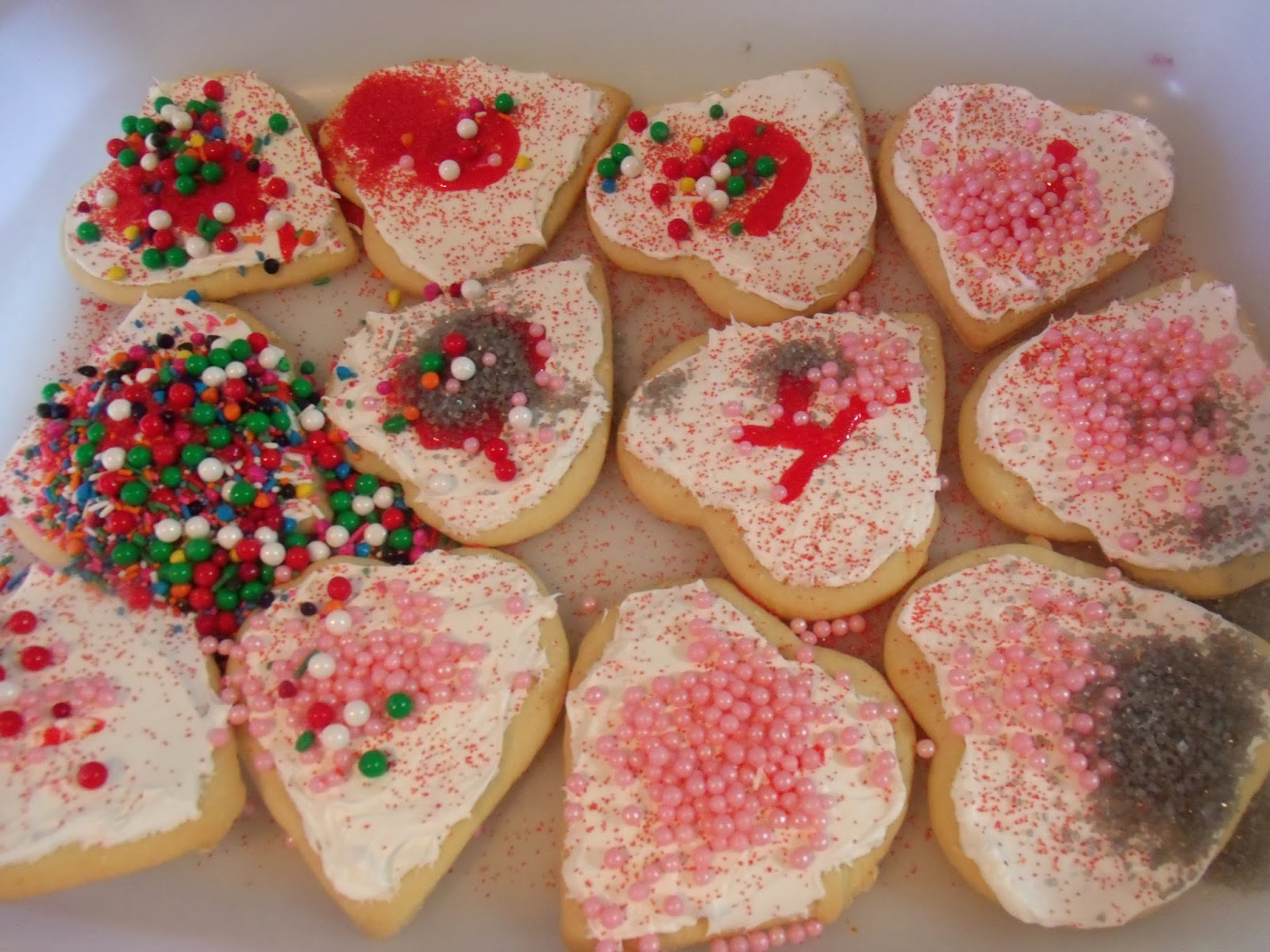 and the family. Each person's cookie was marked with his or her initial before S. and L. decorated it. 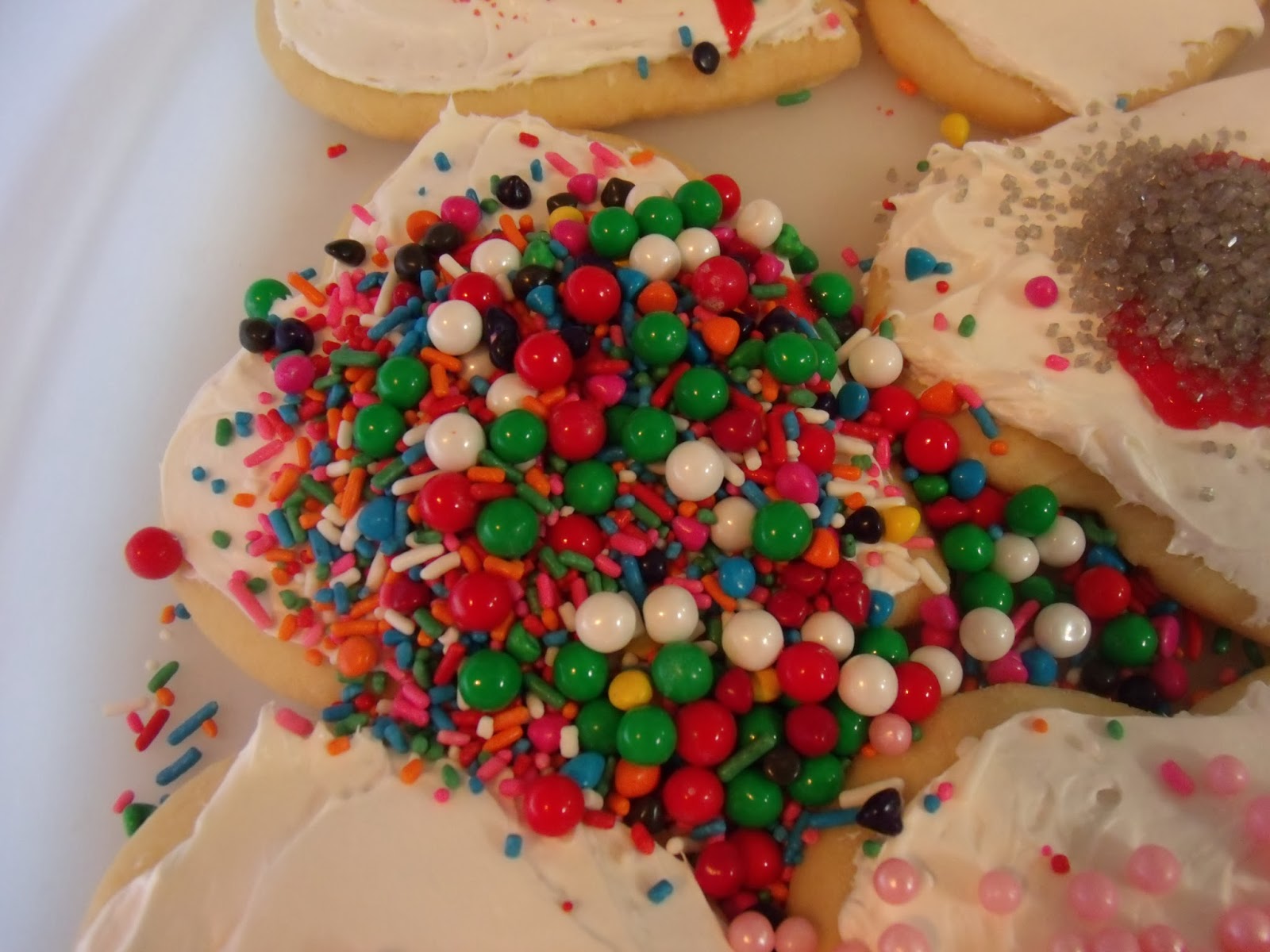 This was M.'s, can't you tell? I guess I'm not the only person heavy-handed with toppings! Daddy and M. took theirs on their trip, and the sugar rush lasted through the entire state of Texas. 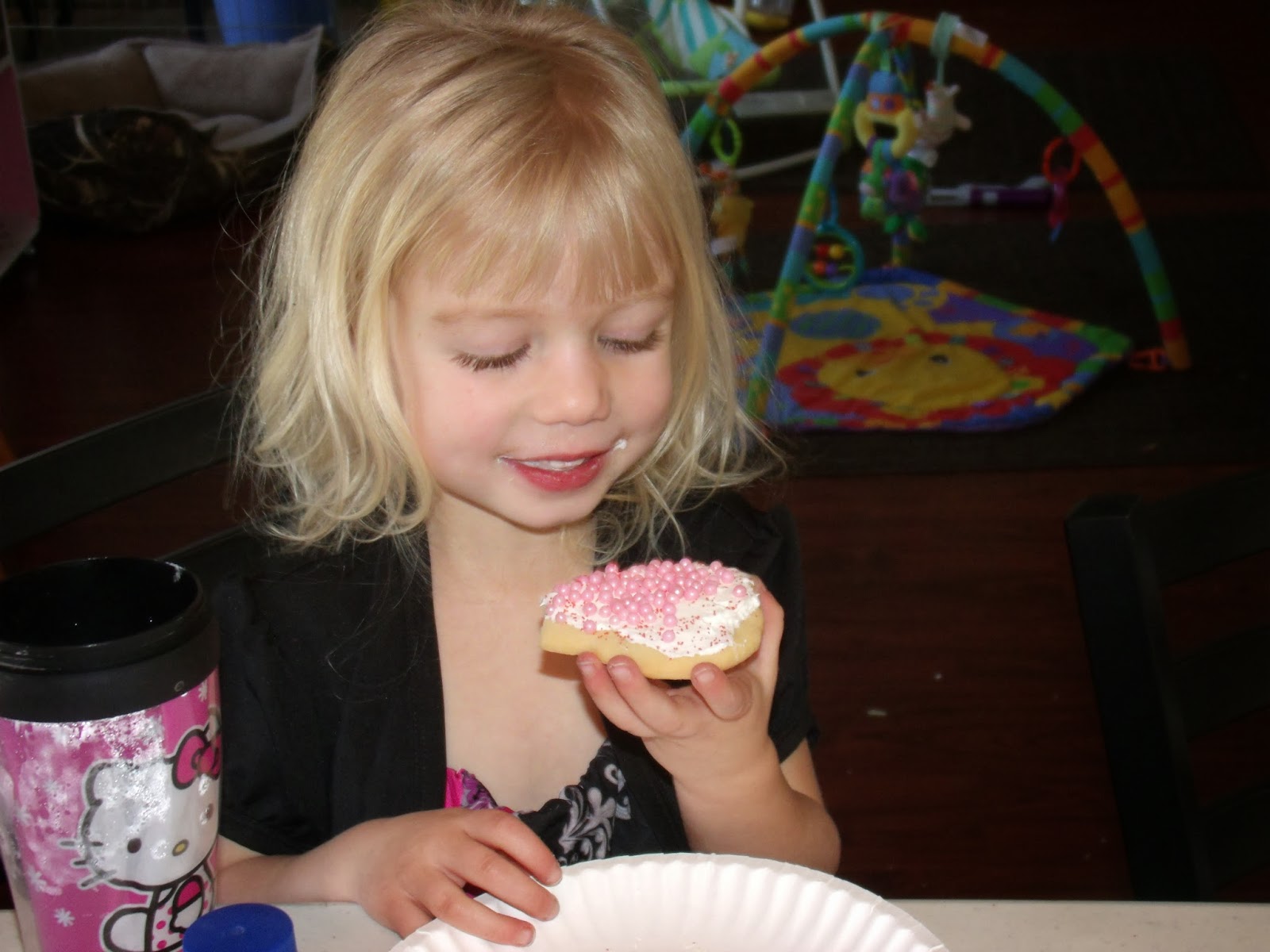 Mmmmmm, sugar!
Next up: rock painting.
"Look Mommy, I made a happy face!" 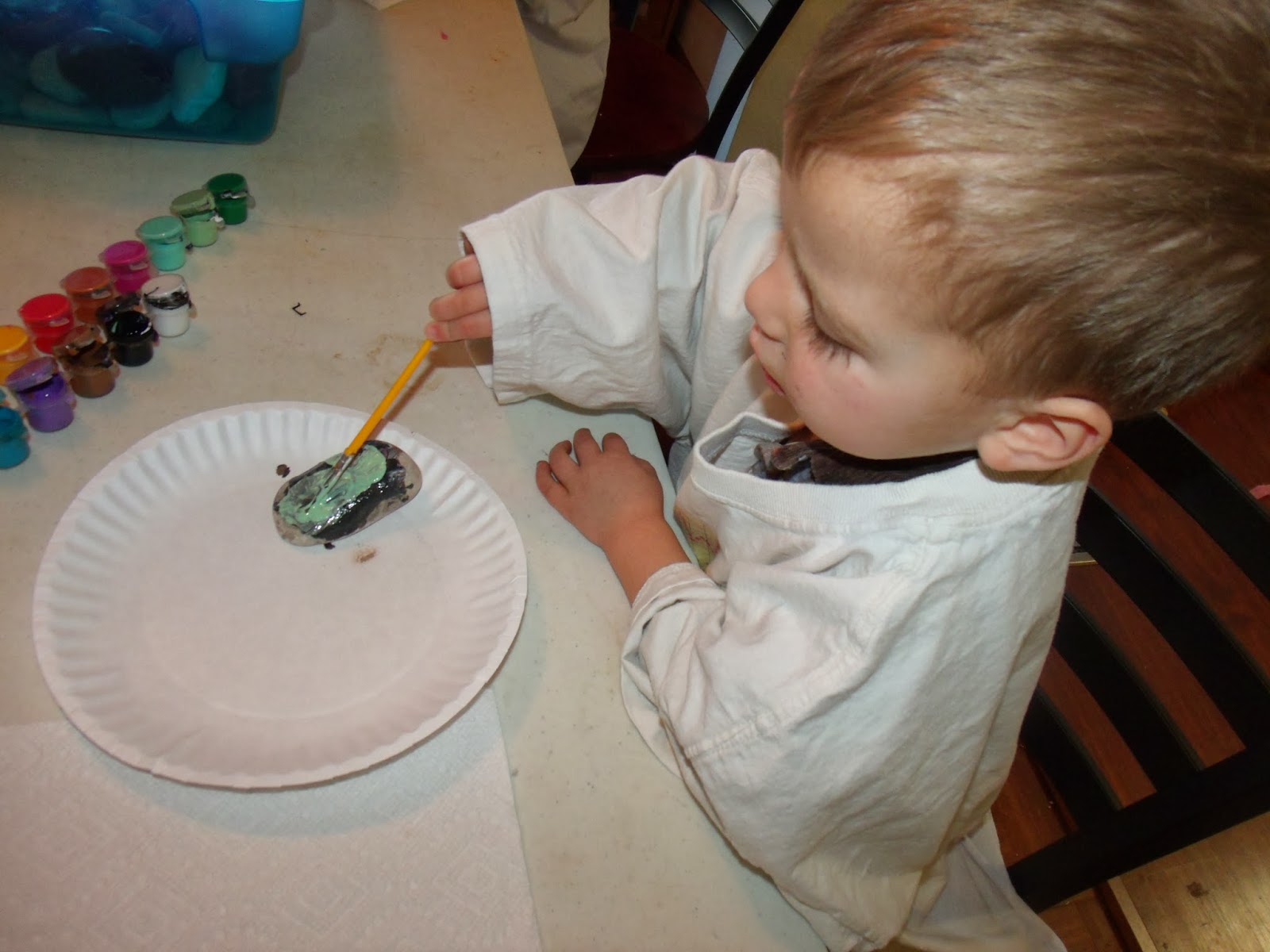 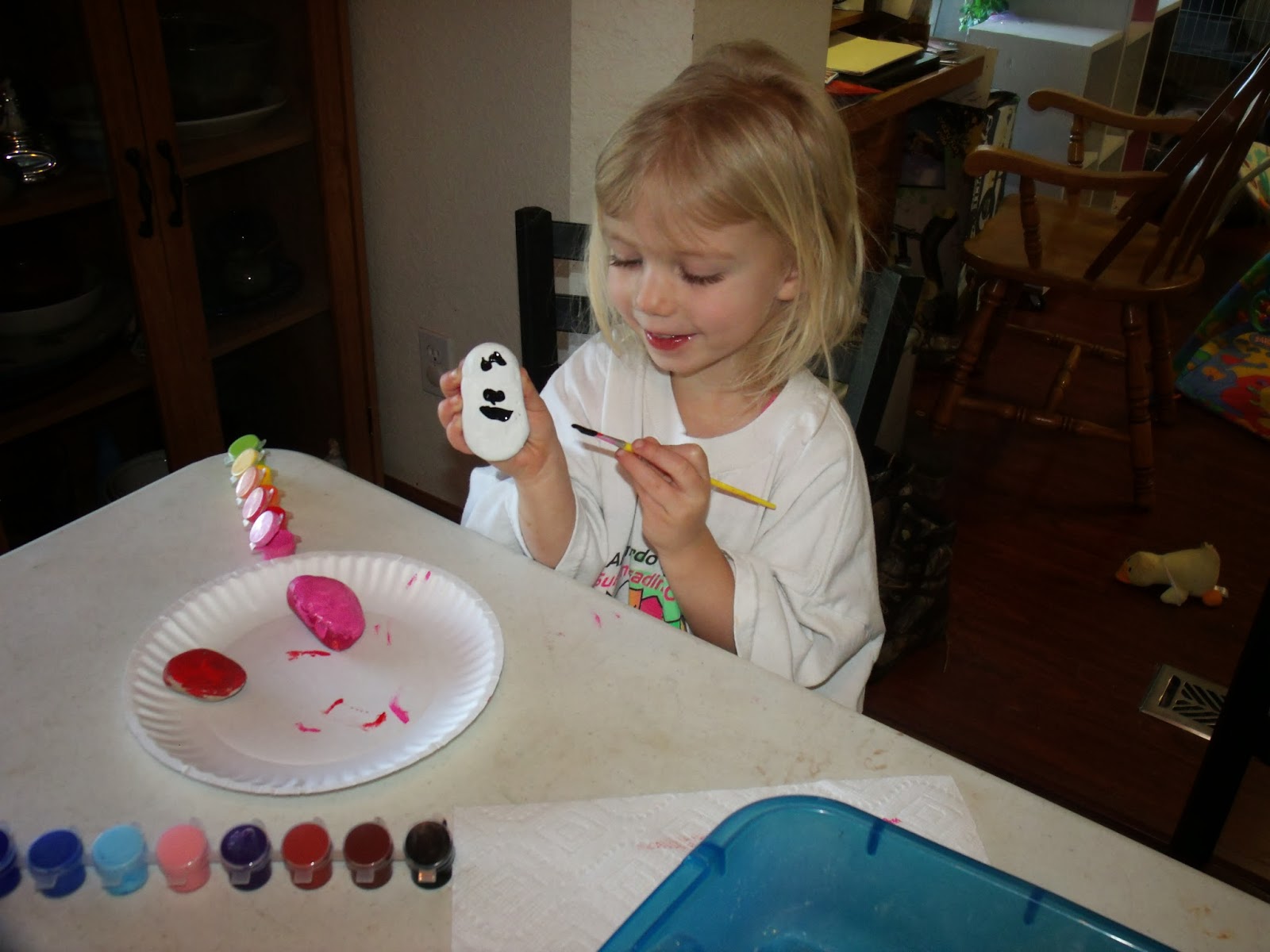 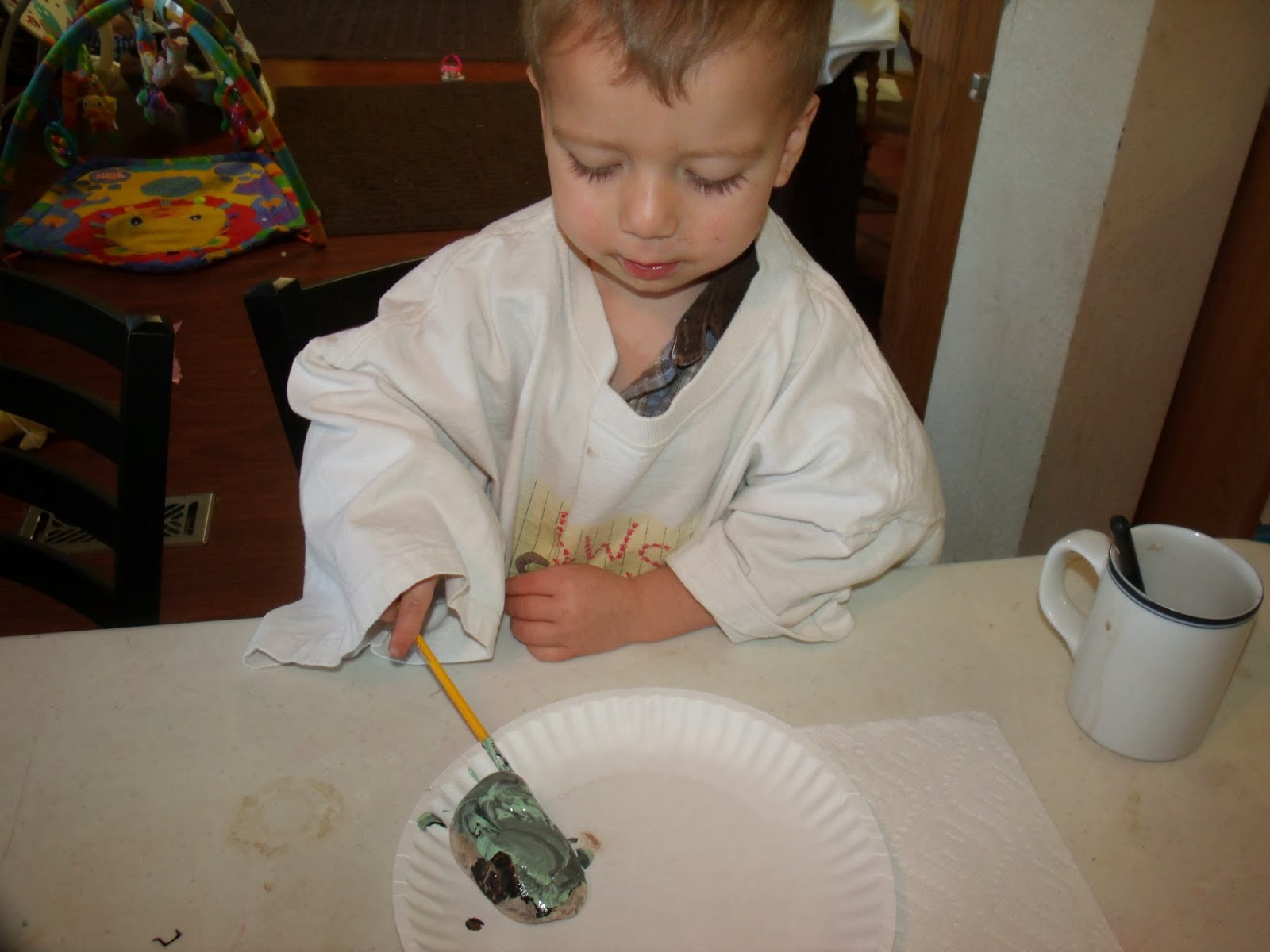 Did I mention someone was a bit heavy handed? 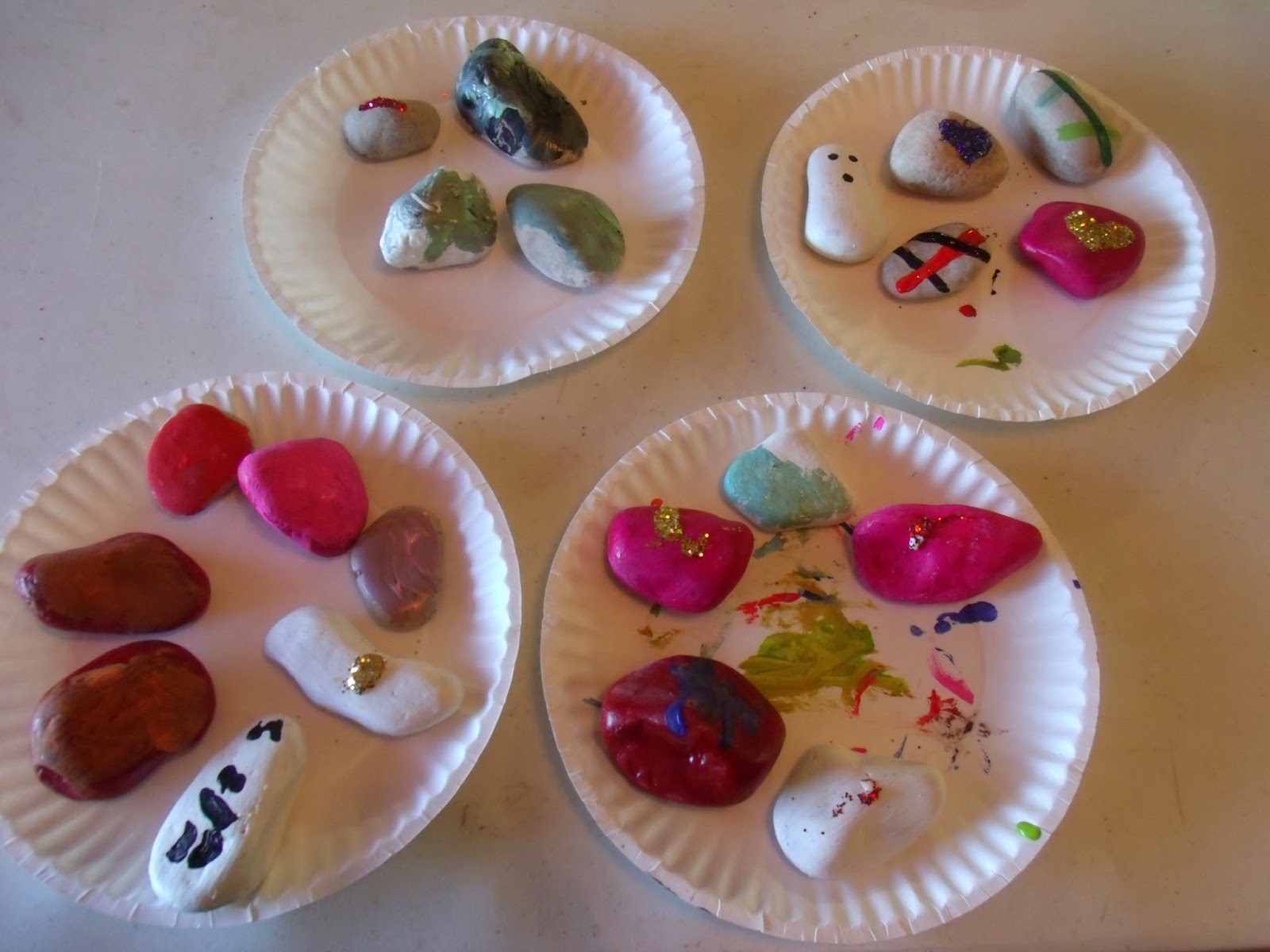 Okay, so now the table (and kids) are a mess. Did you know, if you put a little bit of dish soap, and a little bit of water in a blender and turn it on, you get a LOT of foam? 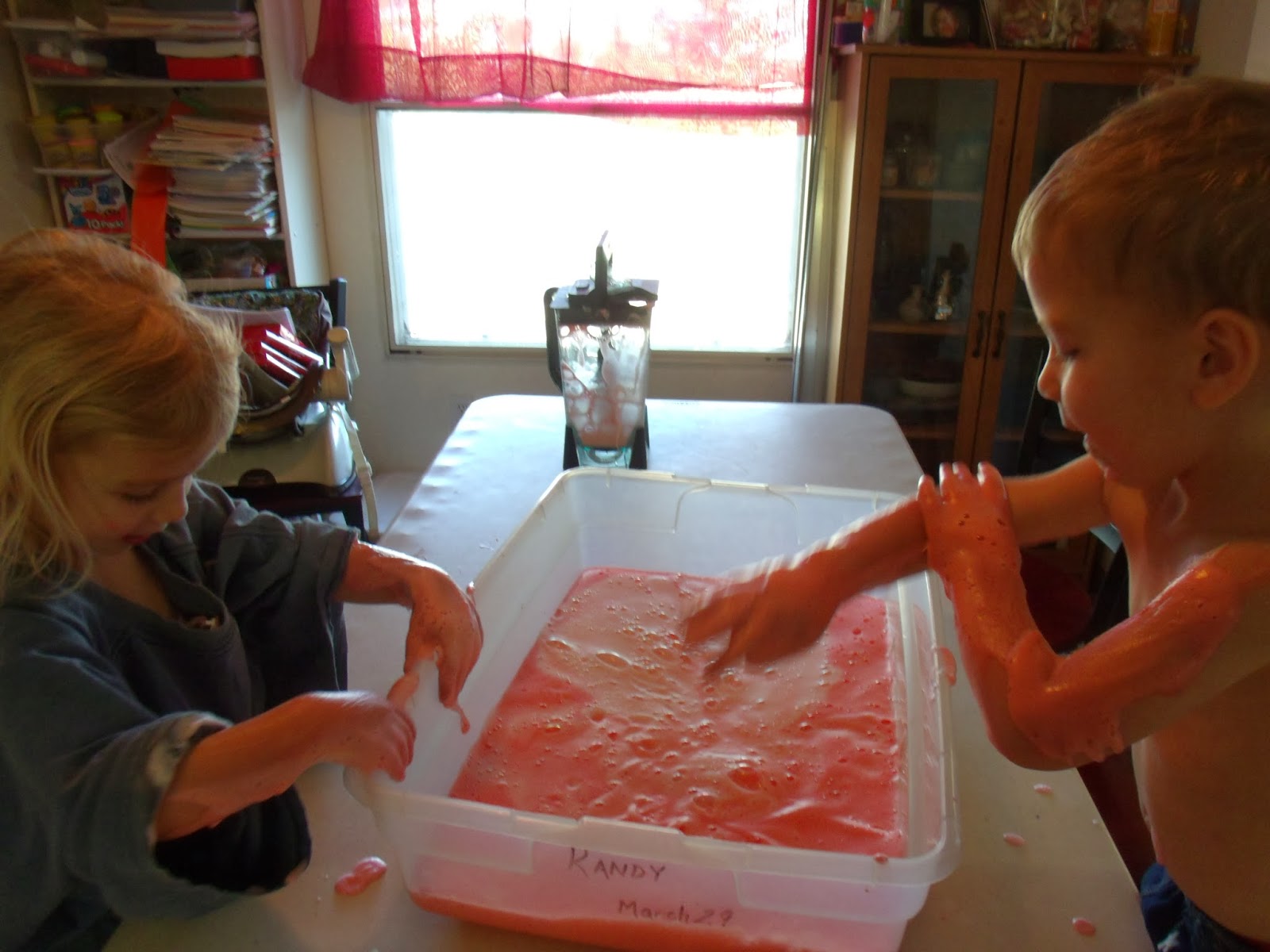 Who was I kidding with this tub, anyway? 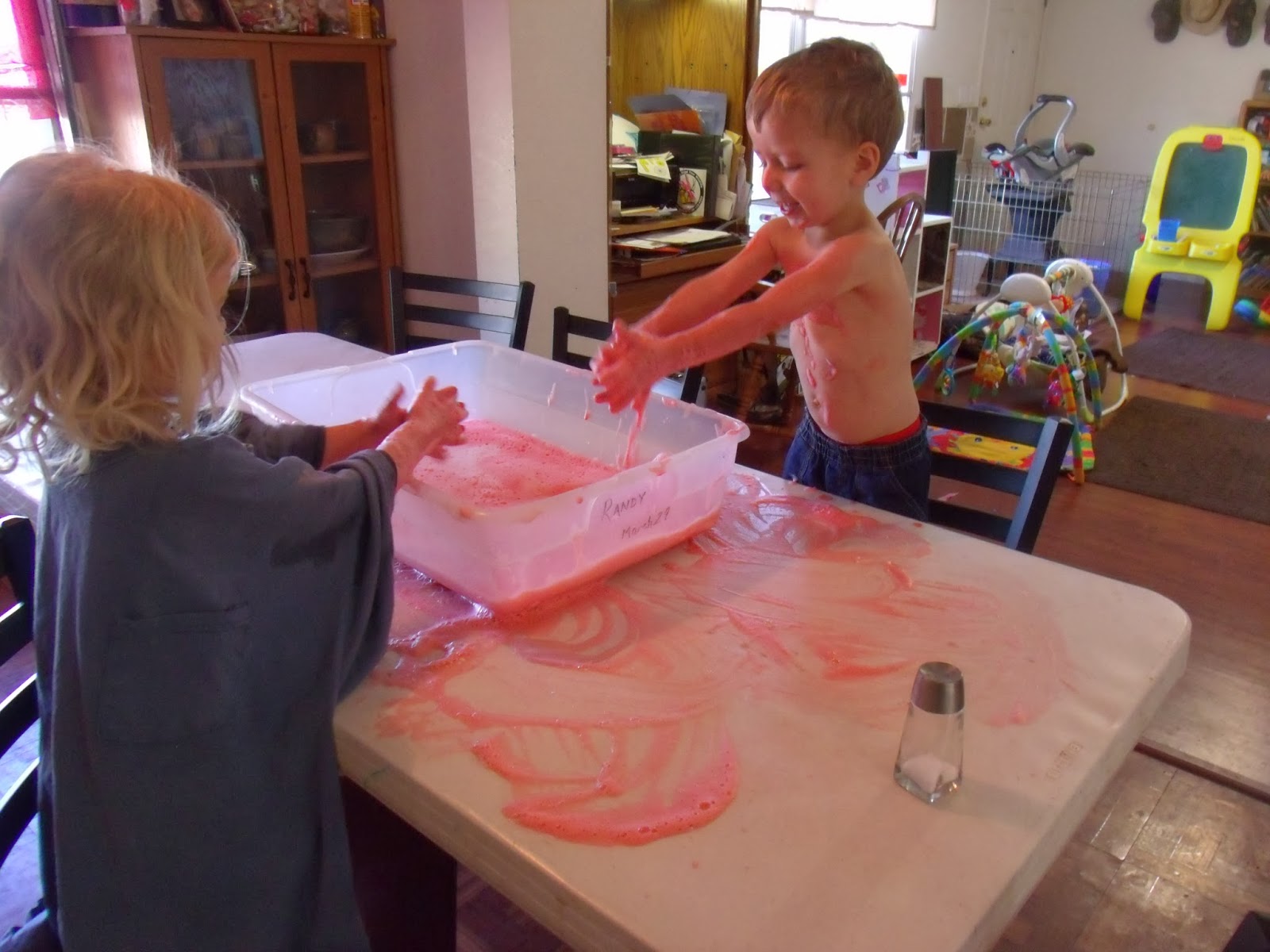 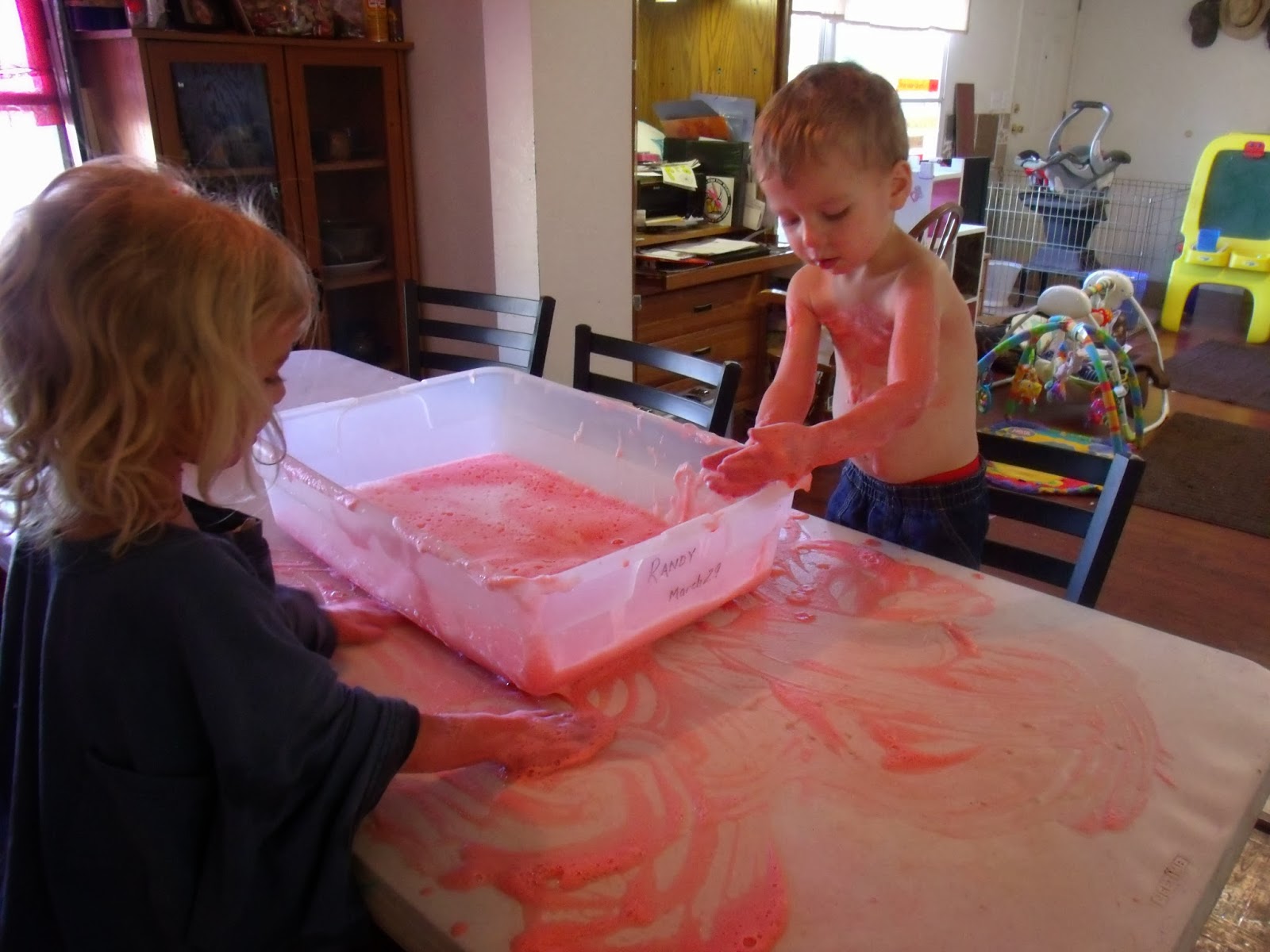 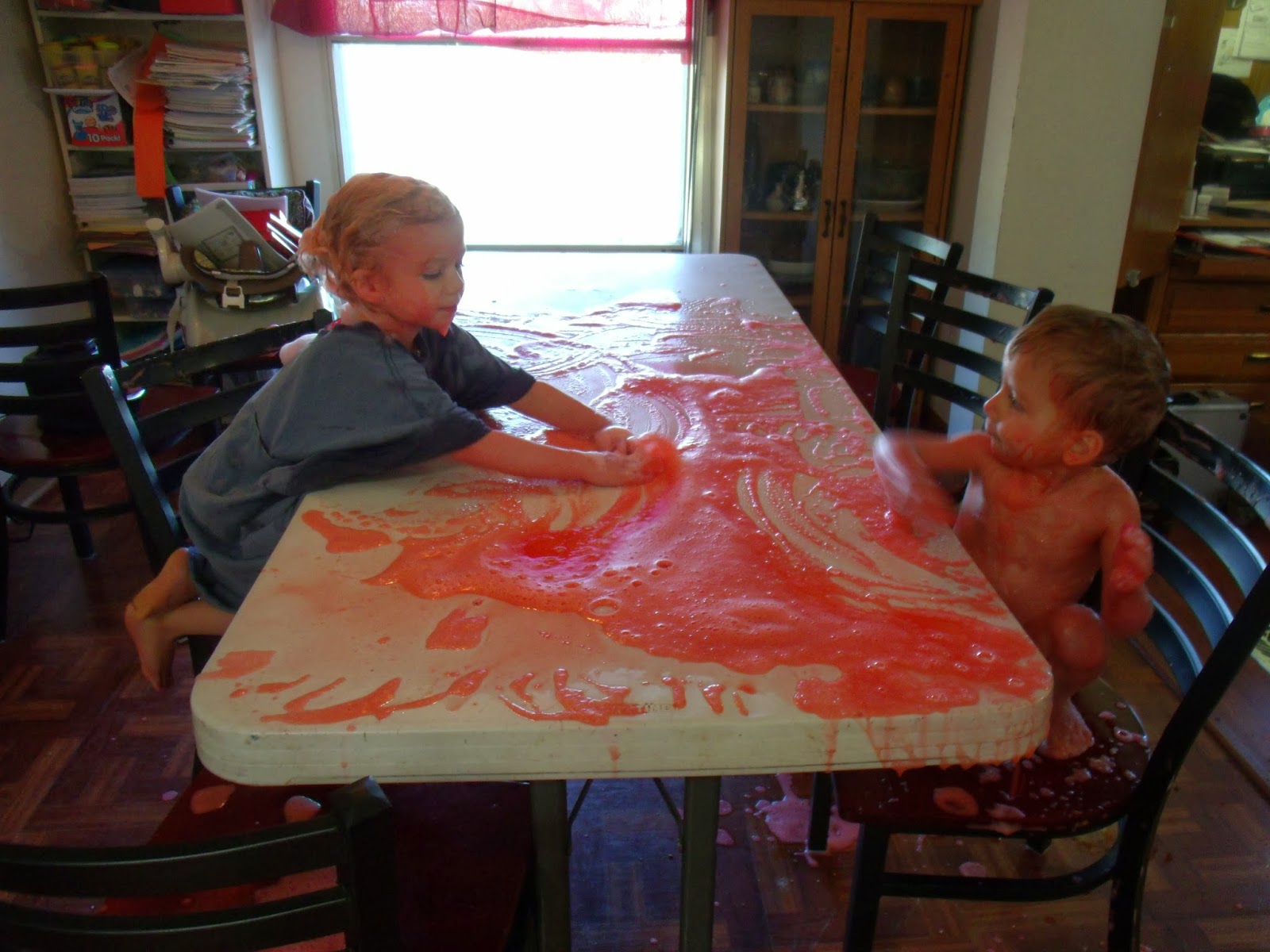 Yeah, the tub was kind of pointless. 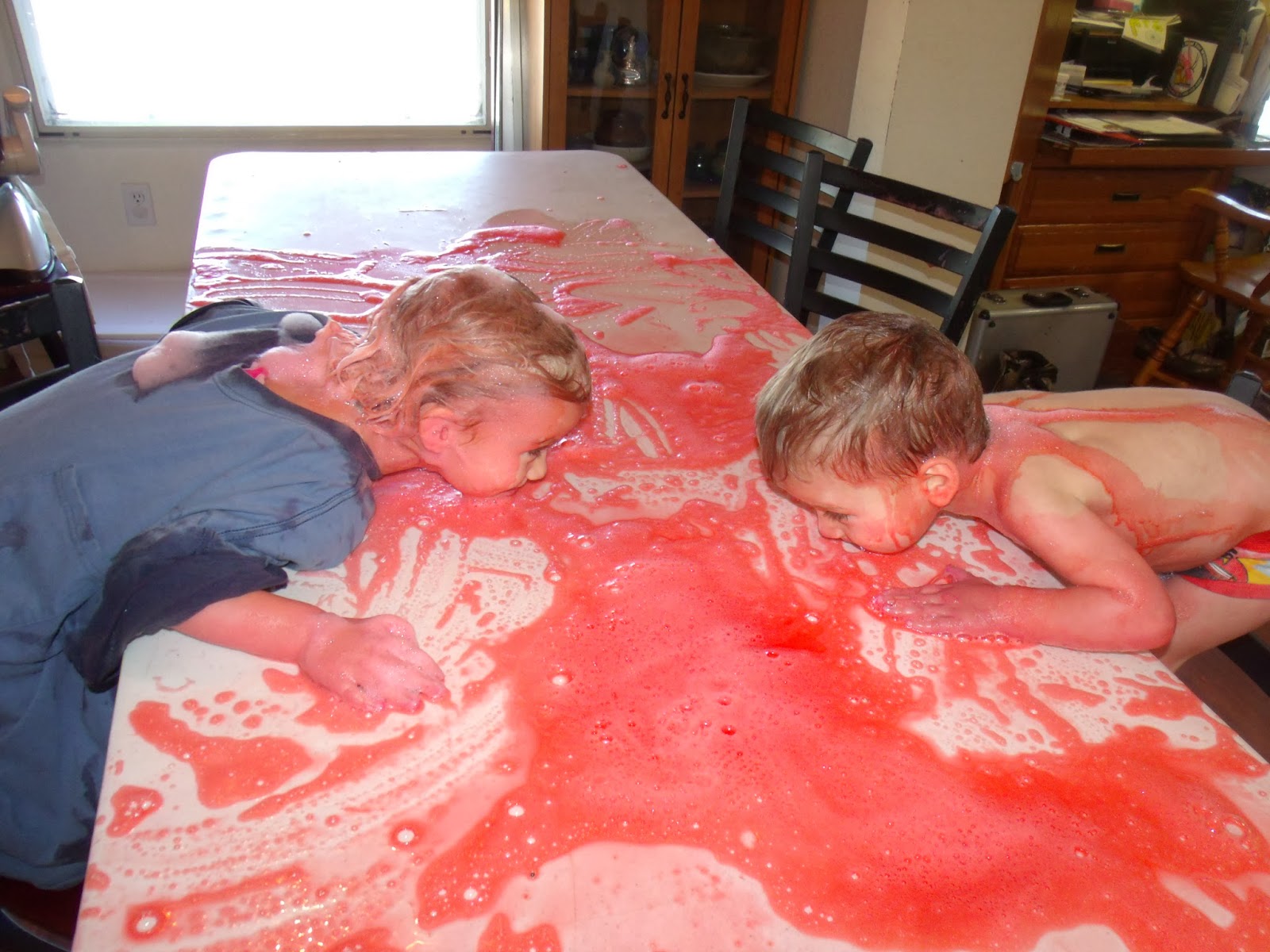 Fortunately, Grandma stopped by about this time, with my 8mo granddaughter G. in tow. I thought G. was going to get whiplash from trying to look in every direction at once. Mean old Grandma wouldn't let G. get down and play (in her pretty new outfit), but she did supervise a thorough rinsing in the tub while I mopped up the dining room. The kids are still a bit pinkish, but my table and floors were sparkling clean - momentarily.
Time for a snack! We had some shredded zucchini left from Bountiful Baskets, so I made zucchini 'pancakes' with pink sour cream: 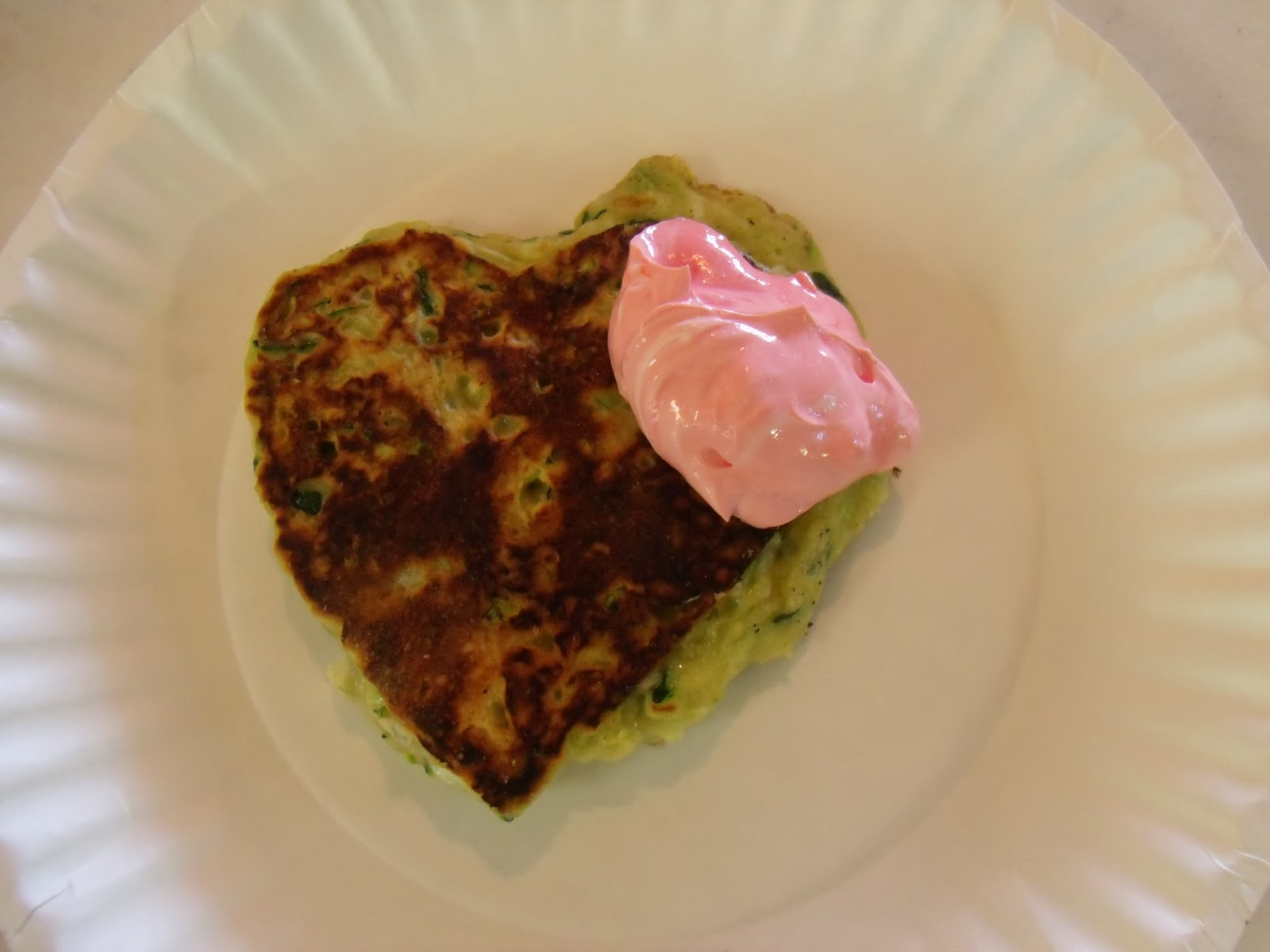 More crafts, then - a commercial kit I picked up last year, when everything was 90% off. More glitter! 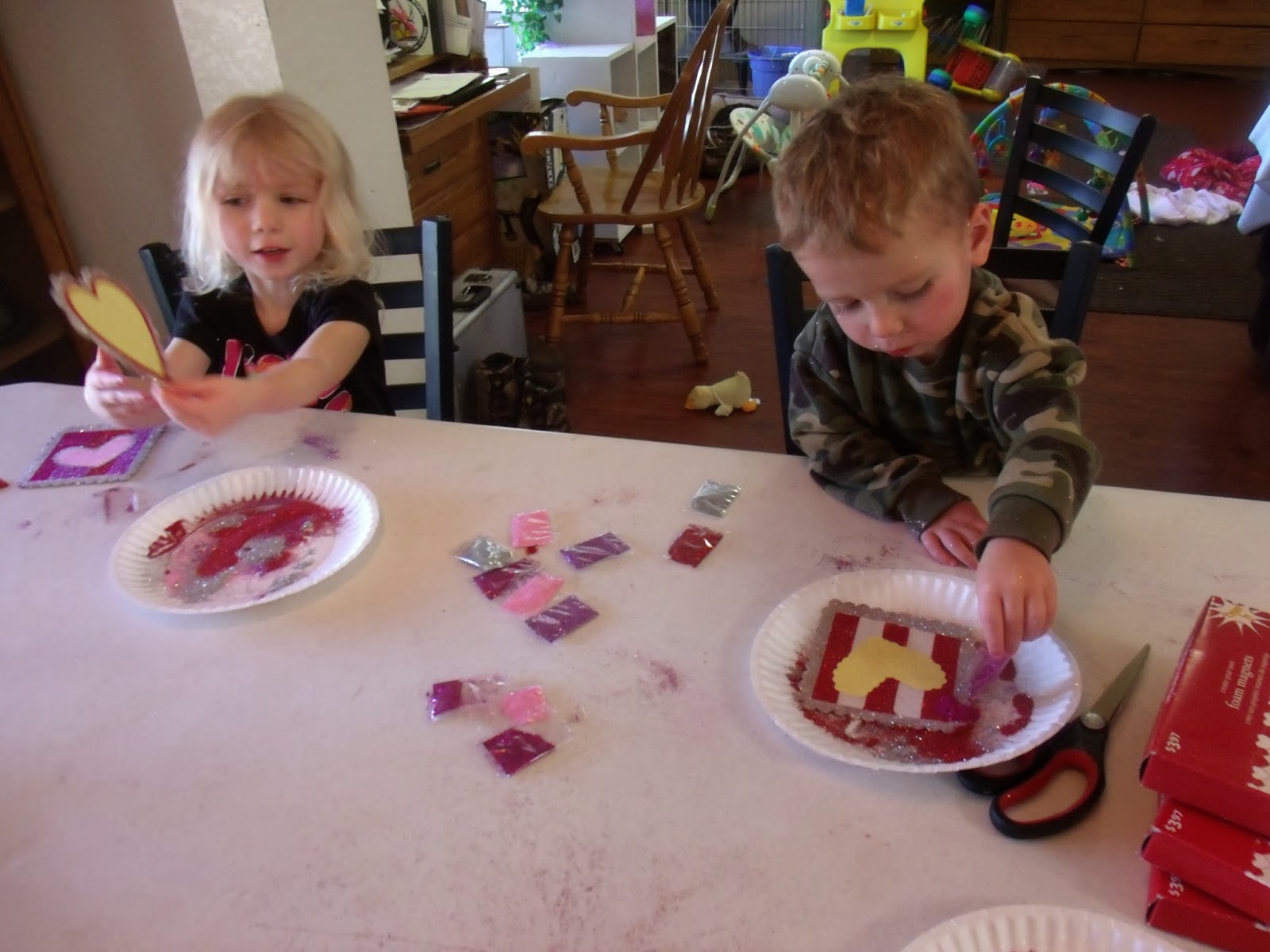 The table was no longer sparkling clean, but it was definitely still sparkling.
Lunch and nap time, during which I grabbed the leftovers of the Valentines we had bought for C.'s class, and hid them around the house. After naps, we picked C. up at school, played on the playground for a while, then came home and had a scavenger hunt for them. 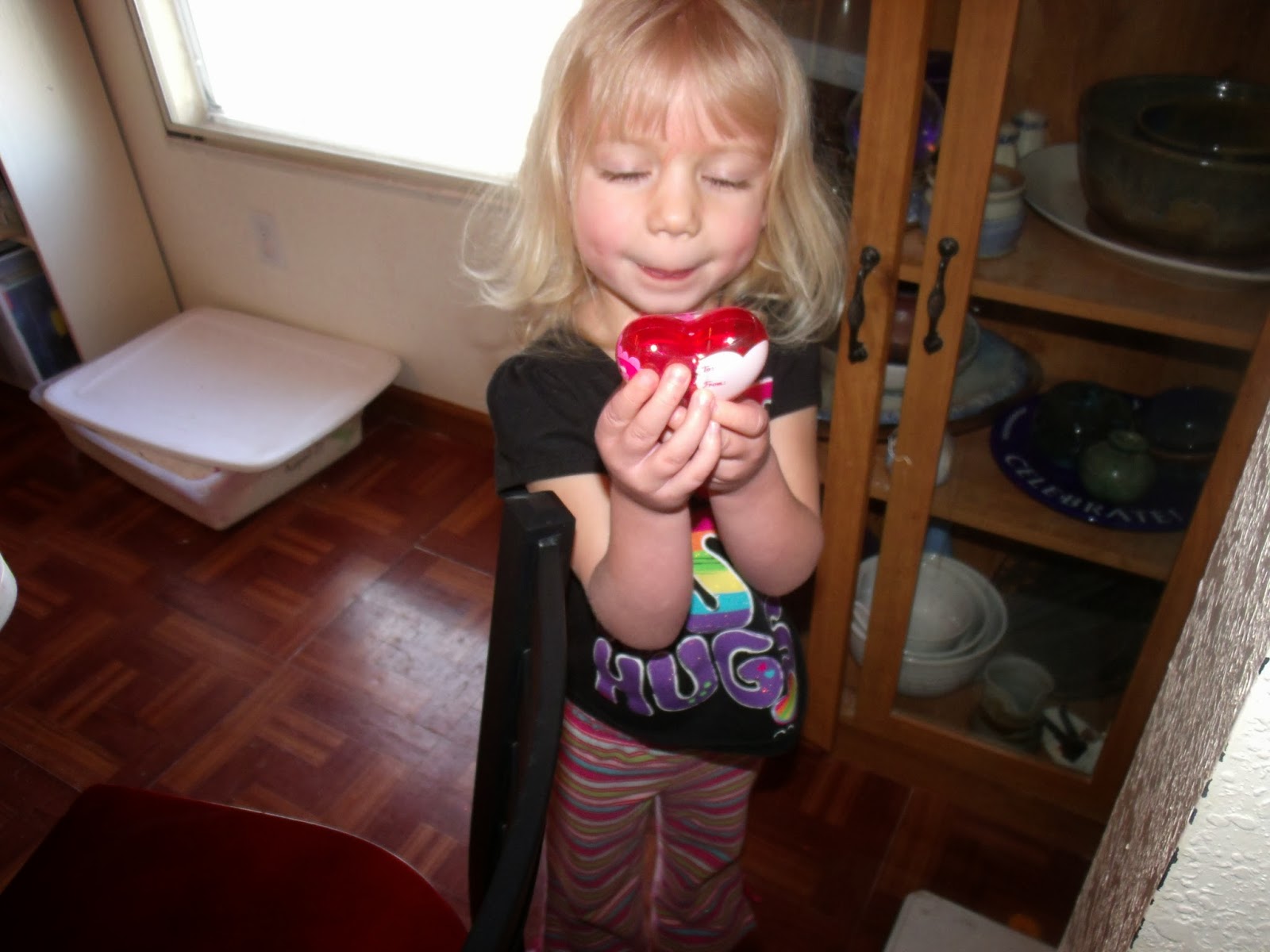 The candy inside turned out to be ridiculously hard, but we're flexible. We can do patterning with the candy and just glue it to paper, and the plastic hearts will see many reincarnations, I'm sure!
Can't have C. missing all the mess, time for glitter slime! There are many slime recipes out there. I wanted to use the one with liquid starch, but every single store in town is out. Highly bizarre. Instead, we mixed:
6 oz. glitter glue
5 oz. clear glue
3 cups water
and added about 3T Borax in 1 cup warm water. The kids mixed it up by hand... 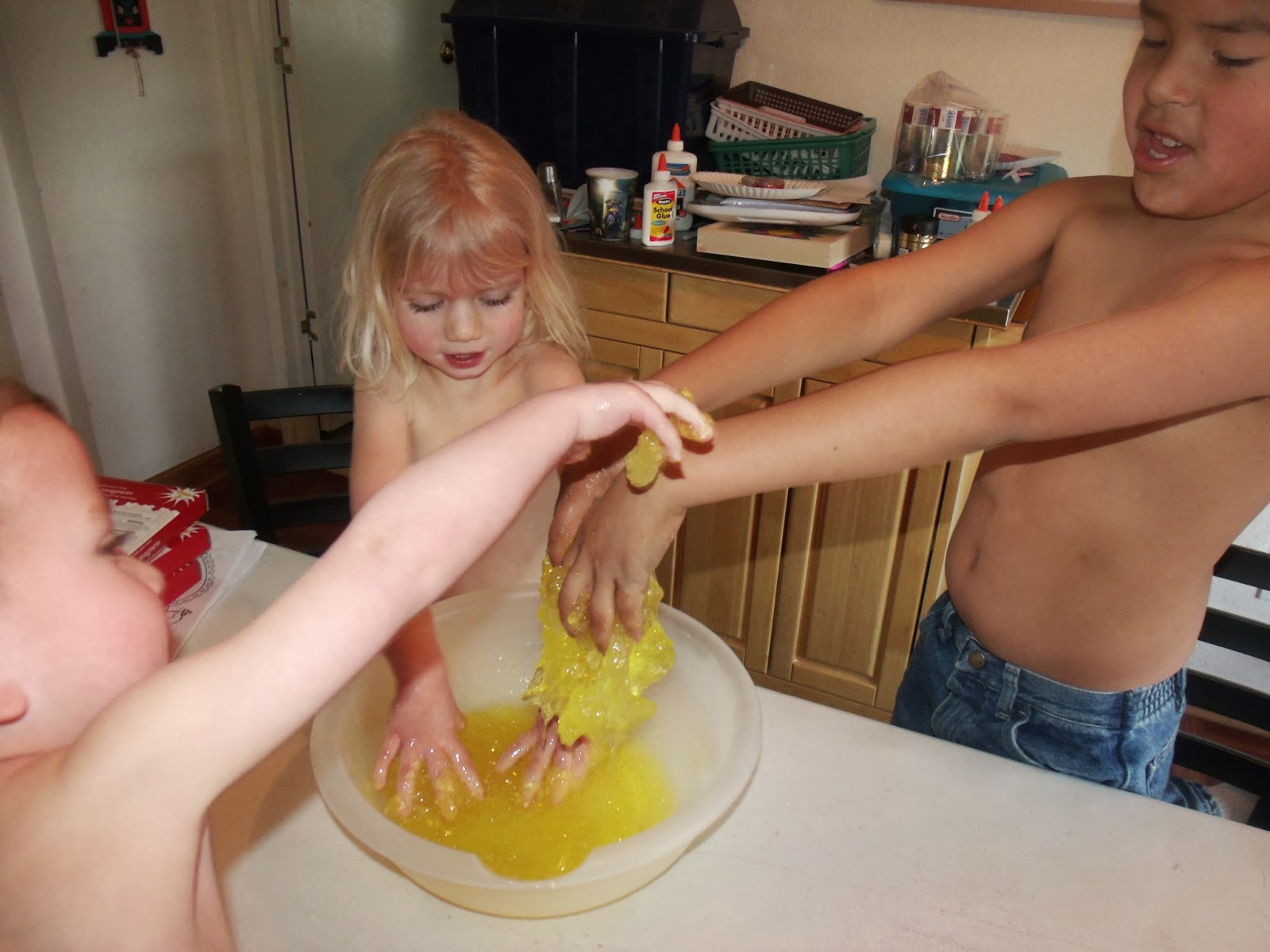 ...and then experimented for a while. 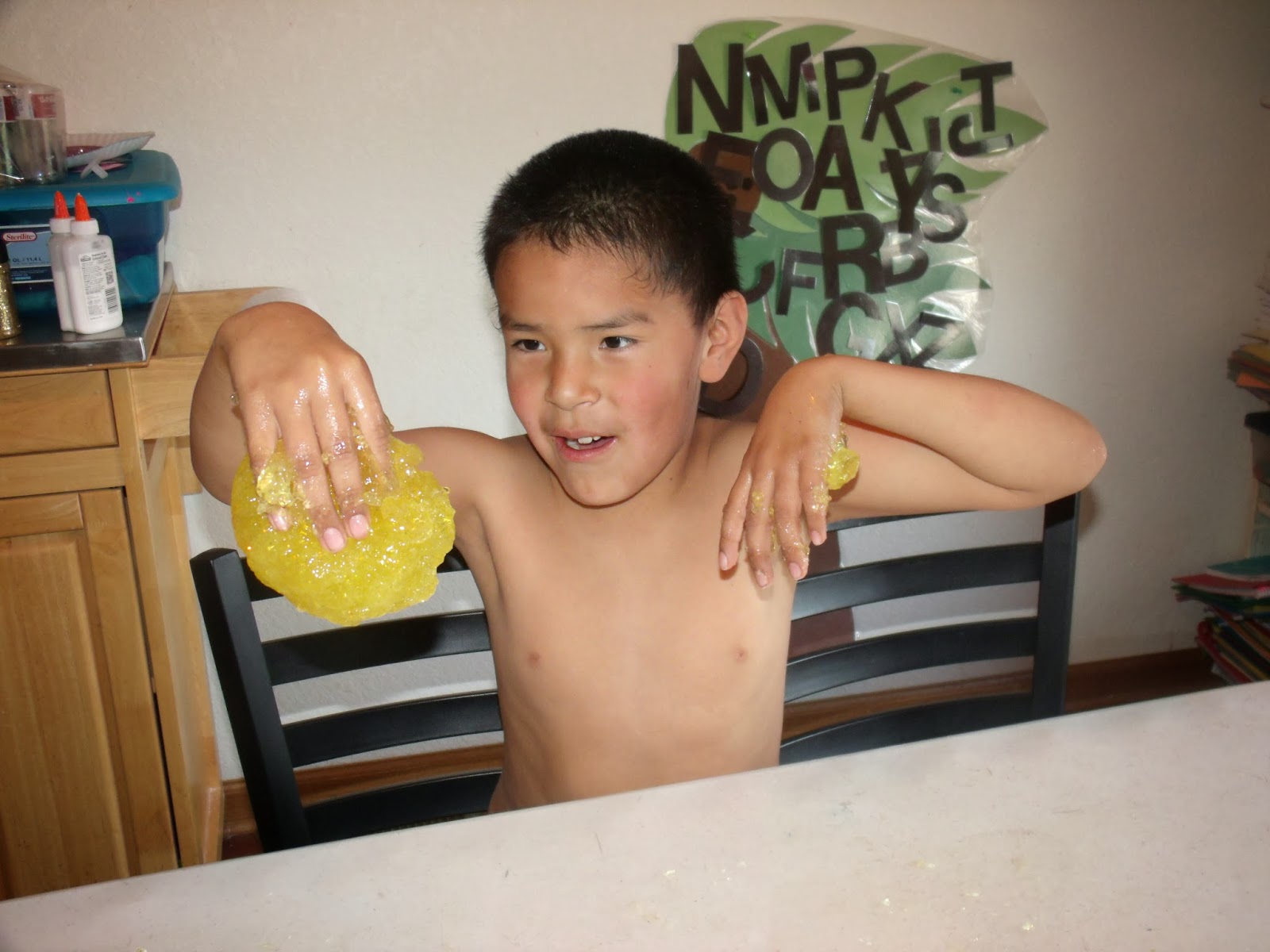 As gooky as it looks, it's actually pretty easy to pick up again. After they had their fill, I put it in an airtight container to play with again later.
We had a blast, but by this time, I was ready for a little order. Fortunately, the kids were ready to just plain play, so I was able to get dinner together and spend some cuddle time with Baby S., who had had enough of watching from the sidelines. We finished out the evening with a movie, and ate the rest of our very-colorful heart cookies.
This is not a normal day off for us - I don't think we have EVER had this many activities back to back. The kids have missed out a bit with all the new-baby-craziness, though, and have been super about it, so I was determined to make this one day all about them. I hope you had a fantastic day with loved ones as well - and, if not, in the words of Cheap Otter, "If you don’t have anyone to smooch with, don’t get discouraged. Watch “Must Love Dogs” or “You Got Mail” and eat some chips and salsa…."
Hmm...I think I just figured out my bedtime snack...