Thankful for Babies and Doctors

Like most expecting parents, Daddy and I often wonder out loud what baby-to-be will be like. Our kids are all so unique, with such strong personalities, that we spend much of our time shaking our heads in amazement (or amusement).

In fact, it is usually at those times that we look at my belly and ask that question.
I'm beginning to think this will be our "It's all about ME" child. He gave us a bit of a scare at 6 weeks, and since then has doubled every pregnancy symptom I experienced with his siblings. The first time I felt him kick, he was trying to kick S. off of my lap. He is very food-oriented, and lets me know exactly what he thinks of whatever I have eaten (or not eaten). He also lets me know exactly what positions I may or may not sit/stand/lay in. He has been known to interrupt conversations with sudden backflips, and staff meetings with hiccups.
His due date has been January 1. You would THINK the possibility of being the New Year Baby would appeal to my little narcissist. Unfortunately, he must have heard me say that I would actually prefer the tax deduction - just so long as he comes after Christmas. You know, so everyone can have a nice, relaxing holiday at home, before the hustle and excitement of welcoming him into the world.
Which brings us to the ultrasound we had back in August. Not only did he insist on being a boy, rather than the twin girls I had requested, 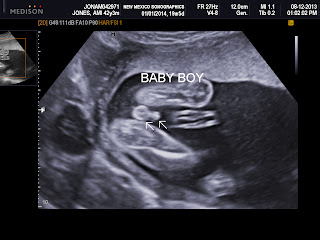 the prenatal specialist in Albuquerque expressed concern that his left ventricle looked slightly smaller than his right. If I squinted really hard at the picture the doctor showed me, I could kind of see what she meant. The important thing was, it meant another ultrasound! One of the perks of being of "advanced maternal age" is that you get the fun 3D ones, with lots of pictures.
So, a few weeks ago, we headed in for a rather longish ultrasound. We saw his fat little cheeks,

his objection to being poked,

and his perfect little fingers.

What we did NOT get a clear view of was his heart. He was not exactly cooperating with the tech, and finally fell asleep and refused to move at all.
The specialist decided she needed to see him in action herself, so we were back again just a week or so later. This appointment took two hours, and when the tech got a clear view of his heart, there was no squinting needed to see the difference. The left ventricle is quite a bit smaller than the right, and what is more important, the aorta (the artery that comes out of the left ventricle and takes oxygenated blood to your body - see, I did listen in fifth grade science!) is proportionately narrower.
This is known as "coarctation of the aorta", and if you want to google it, you can really freak yourself out. This is one of those things with a wide range of seriousness, however, and both the prenatal specialist and the neonatal cardiologist who saw the images later seem to feel it's somewhere in the middle. Not serious enough that he should need surgery (pretty please, God), but serious enough that we will be delivering in Albuquerque, at UNM. Exactly how bad it is/what needs to be done won't be known until after he is born (insert here, if you wish, long explanation about valves that close after birth and Mr. All-About-Me screwing up blood flow measurements with his constant practice breathing).
We're hoping to have the baby on a Friday, spend the weekend watching him eat, sleep, and poop, and be told, "Meh, you're good - come back for a check-up next month." A more serious possibility is an angioplasty - a little balloon inserted and inflated. Not fun to think about, but better than actual surgery! Either way, we feel very good about him being born at UNM - excellent hospital with fantastic staff.
Now, we are just waiting on a new due date. December 27 would be the optimal choice gestation-wise, but there's the minor matter of making sure enough of the team is actually going to be there, and not on vacation! So, we may be looking at earlier - and spending Christmas four hours away. I have the feeling Mr. Me will be pushing for the latter, in an attempt to keep our focus on him, and not on some other little baby born in less than perfect conditions.
We appreciate your prayers, and I will try to keep everyone up to date. I hope this will help excuse my lack of posts this month - and, if there's a bright side to being stuck away from home for a stretch, maybe it will include time to write reviews! Hope everyone has a fantastic Thanksgiving, spent whatever way you wish!
﻿
Posted by Ami at 7:04 AM