I had to work Saturday during the BB pickup, so Daddy got to go collect our food. Gee, some of his favorite things - standing in line...in the heat...down in the valley. Fortunately, the truck was EARLY, and the amazing volunteers had everything sorted so quickly he was out of there in record time - and got to visit with a few people, which is one of my favorite parts.
I, on the other hand, had to wait until I got home to sort through the bounty: 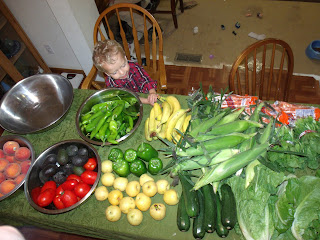 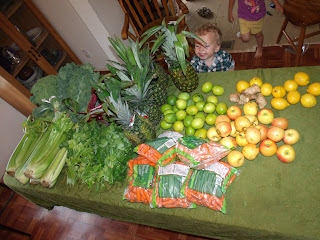 and five juicer add-ons. I also got 38 pounds of Bartlett pears and a bag of granola. 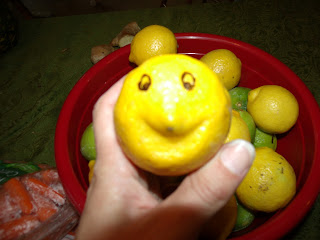 Such happy fruit! I couldn't resist drawing eyes on this one to go with the smile. L. immediately decided it was his new friend. What's funny is, I had just brought this book home from the library, and hadn't even read it to the kids yet:

Absolutely adorable, and already scheduled for an upcoming story time!
Sunday I tried to get most of my cooking knocked out, focusing on things that would go bad. One basket got packed back up for Grandma, and the yellow pears and bananas were nibbled on throughout the day. I prepared the night before by googling recipes and getting the kitchen cleaned. I also tried to plan things the kids could help with, since this is my one day home with all of them. Then spent all night coughing! That cut out some of the handling I was willing to have them do, but they still got to have some fun.
We made:
Hatch Chile Salsa
Orange Glazed Carrots
Parsley Pesto (from the Food Network)
Pickled Beets
Candied Ginger Slices
Guacamole
Pioneer Woman's Onion Strings*
*yes, I know, we didn't get onions this week - but we got a bajillion last time, and I still have most of them left!
I also shredded the zucchini and froze it for later - we already have summer squash bread on the counter! 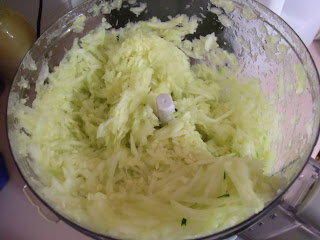 One way the kids helped was by arranging the Hatch green chiles in pans to be roasted. This was my first time roasting chiles of any sort, so it was a big part of my googling last night. I was happy to see an over method, so I didn't have to run back and forth to the grill. I like to do steps of several recipes at once, so while these were under the broiler on low, 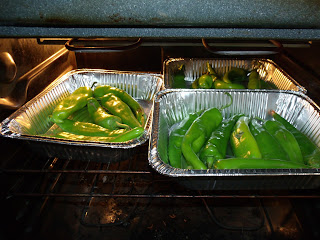 bacon (already cut up) was sizzling on one burner, 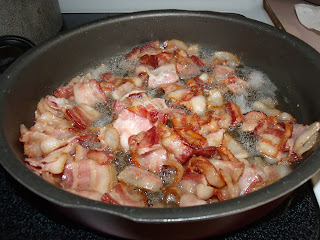 and ginger slices were simmering on another: 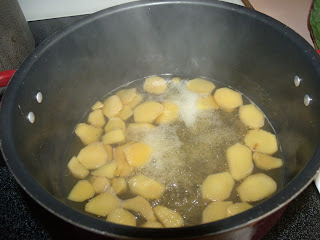 In between stirring those and turning the chilis, I peeled avocado, and diced onions and tomatoes 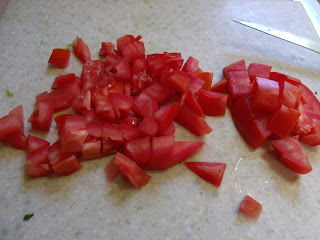 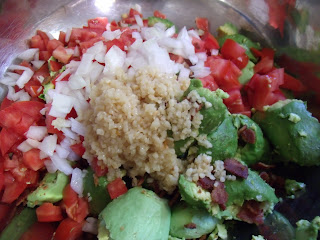 Some of the bacon was crumbled into that, too. I have made some pretty spicy things lately, so I just went with flavor (i.e. no heat) for the guacamole. The kids took turns mashing and stirring:
while I got the peppers out. I put them in a bowl... 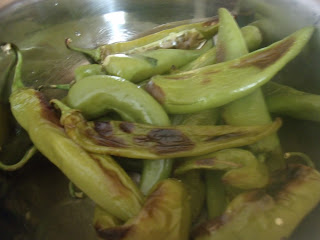 with plastic wrap on top... 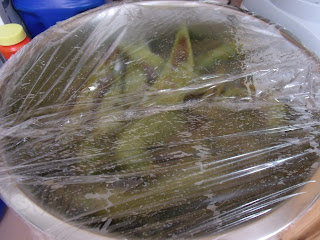 and let them steam. They were pretty easy to peel and deseed after a short time, although I think I should have roasted them a little longer. I was afraid of burning them! I timidly tasted one and decided it was actually pretty mild - perfect for the wimpy Anglo from Ohio. If you aren't familiar with Hatch chiles, they are named for where they are mostly grown - Hatch, NM - and can run the full range of mild to hot. These went into the food processor with the tomatoes, last basket's onions, garlic, cilantro, lime juice, salt, pepper, and a little sugar. 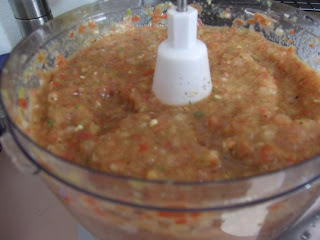 Not a pretty picture, I promise it looks better in real life! Emboldened by my earlier taste, I tried half a spoonful.
HOLY MOTHER OF...................!!!!!!!!!!!!!!!!!!
Okay, these aren't mild. Not by a long shot. When Daddy came home, he tasted a bit and concurred, which made me feel better. I pressure canned the majority in half-pint jars, most of which will probably go as Christmas gifts!
Next round: cut tops off beets and send those out to the sulcatas (they love BB weekends), put bottoms in water to boil. 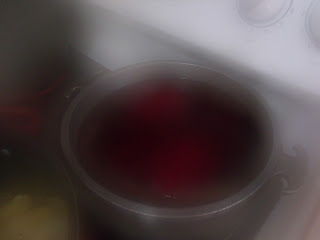 Oops - got the camera too close to the steam. 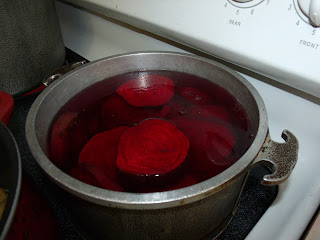 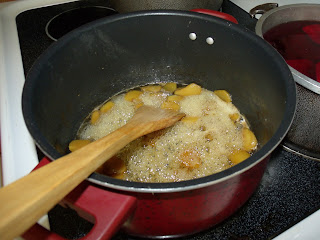 When the liquid was almost gone, I spread them on a drying rack with parchment paper underneath. When they were completely dry, I put them in a baggie and froze them for future Asian recipes, and crumbled the sugar that dripped through into another baggie, to add to tea.
By this time the littles were napping, so C. helped pack 10 pounds of baby carrots into quart jars, 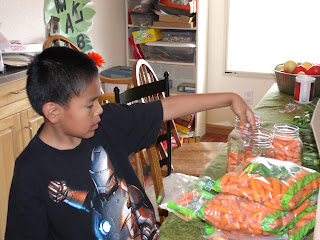 while I cooked up the sauce (brown sugar, water and OJ). There may have been a pound or so eaten in the process, judging from the continual crunching I heard.
Now, every time I make these (so simple, and so yummy), I forget that the sauce simmers along quietly and then suddenly erupts like a mushroom cloud all over your stove. DO NOT LET IT BOIL. It won't hurt the sauce, but man, what a smell! Of course, I had the pressure cooker with the salsa going on another burner, so brown sugar and OJ were bubbling away all over in a sticky nasty mess before I could blink. Fortunately, the pressure cooker's time was up anyway, but man... 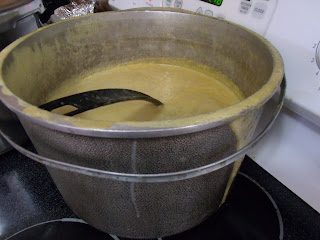 This was after the clean-up. It just wasn't pretty, trust me.
Scrubbing done, I filled to an inch of head space,


and processed in the pressure cooker (once it had cooled down and been cleaned) for half an hour.
Beets were canned in a solution of cider vinegar, mustard, sugar, salt and pepper, and processed in a water bath.
While the canner was doing its thing, I put onion slices in milk to soak (for the onion strings), and made the pesto in the food processor. The pesto went into small containers, 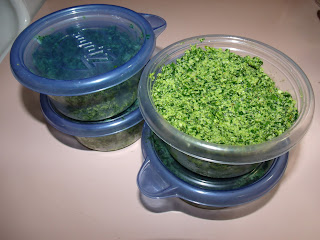 which in turn went into a freezer bag, and into the freezer for future use.
Time to start supper - pineapple lime chicken from the freezer, a cucumber-tomato-onion salad with feta cheese, and PW's onion strings. 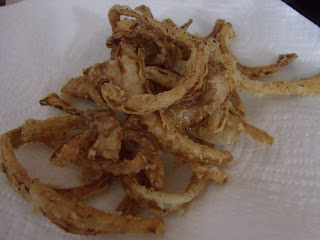 She is not kidding about needing to make more because you ate the first batch. These are so light and addicting, they are like potato chips - you keep eating just...one...more... 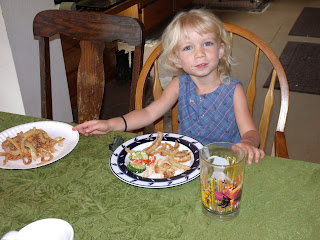 S. is pointing out that Daddy got a LOT more onion strings than she did, and she's not quite sure that's kosher.
In fact, Daddy skipped the chicken entirely and ate an all-vegetable meal. I don't think that has ever happened before! I even took a picture of it for proof, and have spent the past five minutes trying to get it to attach here. For some reason, it just will not transfer. Very suspicious.
I still have tons of fruit and veggies - I haven't even touched the case of pears - but I think that's enough for one day!
﻿
Posted by Ami at 2:00 AM