How to Train Your Dragon(s)

It has been a while since we have had a family movie night, and even longer since I have posted about one. The last one was Mykela's pick (August Rush), so Christopher got to choose this one. I successfully steered him away from Batman, which nobody else wanted to see AGAIN, and settled for How to Train Your Dragon. I hadn't actually seen this one yet, and - I hesitate to admit this - haven't read any of the books, either!
Before I give my impressions of the movie, though: what meal do you plan for a dragon movie? We started with strips of flesh in a pepper and corn sauce. The flesh was left kind of ambiguous, since the people and dragons end up as friends (hope that wasn't a spoiler). Ours happened to be elk. I browned pieces in butter and garlic, then cooked bell peppers and onions in the drippings. Added the meat back in, along with some corn, beef broth, soy sauce and diced tomatoes and simmered about five minutes. The elk turned out a bit tough, so I may cut the leftovers into smaller bits and put them in a crock pot with more liquid. It looked pretty, though: 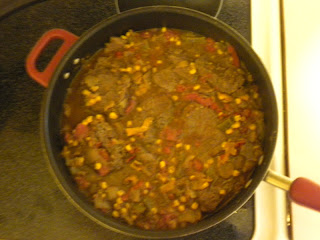 Or blurry. My camera and I were having issues, and then the battery went dead.
Here is where I should mention the silly thing Daddy said earlier. I was charging my fire department radio, and he mentioned that we haven't really had any calls lately.
So, all those people who spent the evening in the snow looking for the lost hikers? Yeah, that would be his fault. But, he was out there too, while we enjoyed our now non-family movie night. Sigh.
He definitely missed an interesting evening. We have to pick up toys before we eat supper, and Miss S. decided to assert her two-year-old independence and refuse, going so far as to dump out the ones Mommy had helped her with. So Mommy asserted her right into the time-out corner, and everyone else cleaned up, conspicuously giving a wide berth to the area she had been assigned. After a few minutes of being ignored, she quietly scootched over and started picking toys up - because SHE wanted to, of course, not because someone had TOLD her to. So two!!!
The somewhat disappointing meal was washed down with dragon's blood (Sprite and cranberry-pomegranate juice). C. and S. don't normally get sodas, so this went over well. Until S.'s started growling at her. Apparently carbonated beverages react strangely with the valves in sippy cups. We all joked about it, but she wasn't to sure about that, and ended up not finishing hers!
For dessert, I had a bag of spicy Chex Mix, which I called dragon food. S. normally likes spicy things, but these made her cry! Poor baby. C. and I didn't like them either, so M. got the whole bag. A bag of rice cakes I've been trying to get rid of made C. and S. happy, and we settled in to watch the movie.
Other than the minor distraction of trying to listen to the scanner at the same time, we enjoyed the movie. I love sarcasm (big surprise, I know), so I enjoyed several of the characters. Funny lines, great action scenes. I have no idea why the two generations have completely different accents - maybe it's in the book? - but it didn't bother me, just made it the more bizarre.
All in all, not our most successful family movie night, but it could have been worse. The hikers were found, Daddy made it home and got something to eat (we'll skip the part about the broken glass), and we remembered both the time change AND the tooth fairy. Well take it - and try again next week!
Posted by Ami at 10:13 PM

Email ThisBlogThis!Share to TwitterShare to FacebookShare to Pinterest
Labels: Home Life, How to Train Your Dragon, movies