Halloween: So, after hearing C. asking me every single day if it was Halloween yet, and if this was the day of the party at the church yet, the day finally arrived. Grandma had the kids fed and dressed in their costumes when I ran up straight from work, picked them all up, and met Daddy and M. at the church.

Where C. promptly threw up.

When Grandma asked if he wanted to just go back to her house, he agreed immediately. Poor guy! But bless Grandma for taking him home, so the other kids could enjoy themselves. L., of course, slept through the entire thing. M. hung out with her friends. S. played several games, won a carrot cake in the cake walk with Daddy, and scarfed down approximately 12 pounds of BBQ.

Library: Slightly not-all-there patron ranting about social services while I continued to scan books and say "Mmm-hmm" occasionally. My phone rings, and he jumps and looks around the room to see where the scary noise is coming from...

Kids:
S. - This child is not old enough to understand the things she understands.

So, she not only understood the thread of conversation, she contributed her own, AND one-upped her brother.

Example 2: I have a latch on the cabinet under the kitchen sink that requires you to push the tab in, tug on the strap, and slide it to the side atthe same time. Earlier this week, I watched her trot over, smoothly open the latch, and take the Febreeze out. Cleaning chemicals have now been moved to a wall cabinet.

Example 3: Earlier this week, she said "Mo-Mo-Mommy," which I thought was a funny way to say it. Then she started saying "ho-ho-horsey," and "d-d-duck." C. has been watching "The Talking Words Factory" and Grandma's house, and S. has picked up from there that words have beginning sounds. Not just the words in the video (cat, hat, bat, etc.), but all words! SHE ISN'T EVEN TWO YET!

We are in so much trouble.

She wasn't feeling good this weekend, but still tried to be cheery: 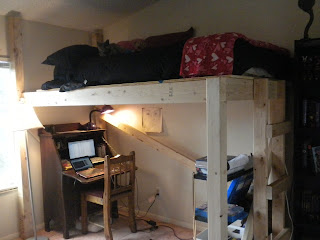 Pretty nifty! And she hasn't fallen out of it yet! We will paint it later - probably black. Daddy is going to build a little shelf at the wall end, for her candy stash and whatever books she is reading at the moment. Another shelf will go above that for CDs and her Ipod. Silverstream, as you can see, enjoys being able to look down on everyone literally, as well as figuratively.
C. - While his week started off with a disappointment, he got to end it with a fun birthday party for one of his classmates. One of the neat things about our little country school is that you can just invite the entire school to your party, and not worry about having too many people. It was the first time I'd been to this particular home, and it's absolutely gorgeous. ﻿I'd double the size of this post if I tried to list all the fantastic food and fun games the parents had for the kids. I got a kick out of the kids who had just filled their coffers with candy on Monday, going crazy over a Spongebob pinata. I guess getting to whack the tar out of a cartoon character is always good. Later on, I overheard one little boy offer to trade another boy Spongebob's leg for a Tootsie Roll.
L. - He seems to want to skip sitting up and crawling, and go straight to walking. It's almost impossible to hold him any more, because he just wants to stand! He has the best smile and laugh - and, now that he is three months old, it actually means something (according to M's psychology class. Whatever!)
So, what do you think of the living room? Okay, that's actually the dining room, but it is currently the home for much of our living room furniture. We are putting in new carpet - a nice dark brown, to replace the original PINK carpet. Yes, pink carpet, with four kids and five dogs, out in the middle of the forest. There will be no "before" pictures here, it was just too icky. Stay tuned for an "after" picture - ran into a snag this afternoon, but tomorrow we'll finish it up and probably rearrange the furniture six times before putting it back exactly the way it was.

Stay tuned also for a description of our family night, along with some recipes. How was your week?
Posted by Ami at 9:28 PM