After the first attempt, I told Christopher his story needed to be a liitttttle longer than a paragraph! He chose one of my favorite pictures from the file, and must have been thinking about it all day, because he finally sat down at the last minute and wrote this: 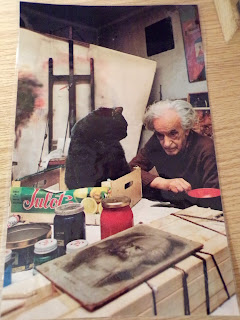 Once upon a time, there was a man who loved to paint. Every day he painted and painted. Everyone loved his work.

One day he met a woman. He paused for a second. His heart was pounding hard. He said, "Do you want to get dinner some time?" She said yes. They went out lots of times, then got married.

60 years later his wife got sick. He tried to make her better. One day she gave him a necklace then she died. He was very sad. For months he didn't paint. Nothing made him happy.

One day, a man came to his house. He knocked on the door. He answered it. The man gave him a cat - a pretty cat. He thanked the man, took the cat in, set it down and looked at it and said "Why would he give me a cat?"

The cat looked up at him. The eyes of it made him see her in it. He could see his wife in the cat.

That made him happier than ever. Then a few days later he started to paint again. More pictures than ever.

Then he got old. In time, some of his family had to take cared of him. Then he was dying, but he was happy. He was going. Then it happened: it was dark for a minute, then light started to appear. Then he saw his wife, and they lived happily ever after.