Last up, Christopher! Not too many pictures because, you know - 12yo boy. We picked up a hitchhiker at the bottom of the hill and took him to his destination first. Don't worry, I've picked him up before, and he has promised he is not an ax murderer. We had breakfast at Plateau Espresso, then grabbed donut holes at the donut shop, because - 12yo boy.

Christopher had money from bat houses burning a hole in his pocket, so we stopped first at the bank to ask about savings accounts for minors. We didn't have his SS card with us, so we couldn't get one on the spot, but he agreed to save some money to start an account later. The fact that I told him I would match anything he put into savings may have had some inflluence.

Walmart for school supplies and to spend the rest of it! 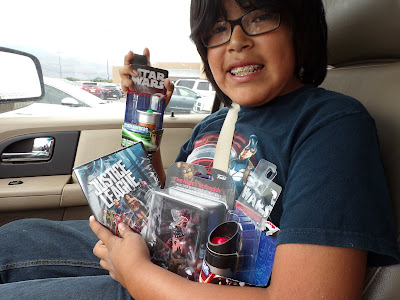 He asked to go to the Tularosa Basin Historical Museum next, so we checked out some of the cool items from the area. 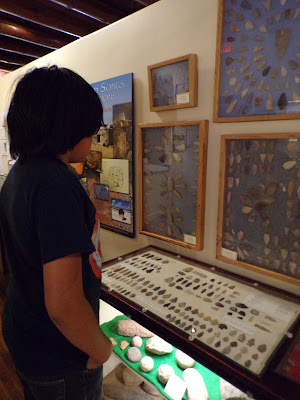 There was still some time left before lunch, so I told him I had an idea - but I wouldn't tell him what it was. I took us to a large empty parking lot, and told him to trade seats with me. I had to tel him three times before he decided I was serious! 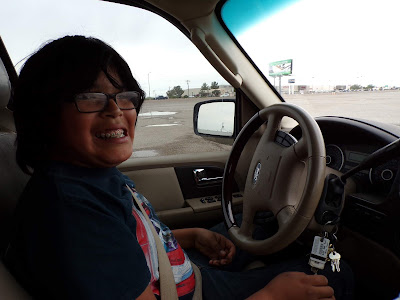 That is a very nervous smile! Knowing that he needs lots of practice with new things, we have been talking about driving safety for a couple years. Today he learned how to adjust his seat and mirrors, and how the gas and brake felt, then I let him actually start it, back it up, and re-park it. Not exactly Indy racing, but a first step - and probably better than him learnng it all in one fell swoop from one of his friends when he's 16! (Hypothetically speaking - but, thanks Krista!)

He was ready to trade back again, and we went to Pizza Hut for lunch, then hit a few thrift shops and a movie (Hotel Transylvania 3). He now has a new pic-up line: "Your delicous neck wrappings are in a nice coffin. Would you like to see my parts?" I told him I will give him a dollar if he says that to a particular girl on the first day of school. Hey, it worked for Drac!

Some quiet time at home before I went to pick up the littles, then his choice of spaghetti and meatballs for supper, followed by sleeping in the camper.

The next two days are MY special days - which means we aren't going anywhere, nobody is coming over, and I am getting this camper, yard and house CLEAN. Not terribly exciting, I know, but it will make this Mom happy!
Posted by Ami at 9:01 AM