It was Daddy's turn to pick a movie, which meant I knew the theme before he even announced a title: cowboys!
Most family members already had appropriate hats (Mommy doesn't do hats), so we just needed bandanas. Have you tried to find red bandanas at Walmart lately? Have you tried to find any sort of bandanas? (Heck, have you tried to find ANYTHING?) The poor worker who was trying to help me kept saying, "Well, they're right...no...well they should be..no..." 'Tis the season to get you to buy stuff, and bandanas, not high on the profit list at two for a dollar, were pretty well hidden. And only came in blue or black. But, I think we still looked smashing, don't you? 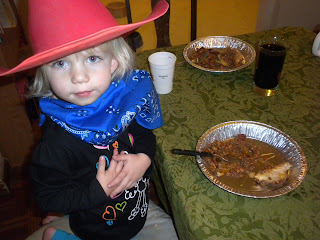 Daddy realized that there has never been a picture of me on the blog, so he tried to remedy that situation:
Dinner was this Cowboy Casserole from allrecipes.com. It was very simple, and REALLY good! I don't usually like bread mixed in with my food, but it turned out just right. I used a maple bacon, a honey BBQ sauce, and Grands layer biscuits, in my deepest cast iron skillet. 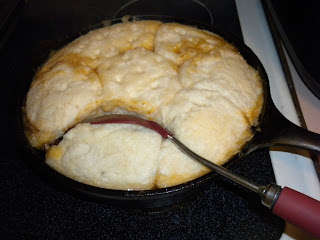 It looked like the biscuits weren't done, but they were perfect. I will definitely be adding this to the recipe file. 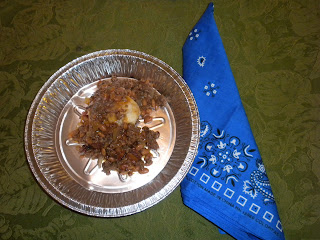 Served in tin plates, of course, with the bandana as either napkin or accessory. Everyone eventually decided to wear theirs, as you saw.
The movie is in three parts, and starts off with a lot of background building. We just got through the first part this night. I thought the kids would lose interest, but C. stayed with it, and S. tuned in and out. L., on the other hand... 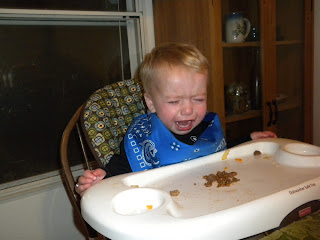 was a little overtired. After some snuggles with both Mommy and Daddy, he was out for the night. Probably for the best: my I-must-climb-everything child does not need to be watching Teddy Roosevelt for more ideas!
﻿
Posted by Ami at 7:30 AM