Daddy made an awesome find this weekend: 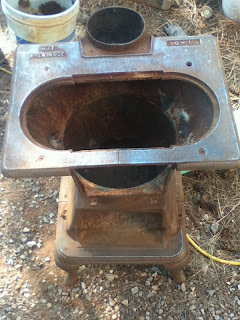 Doesn't look like much here, but with a little lot of sanding and a repaint, it now looks like this: 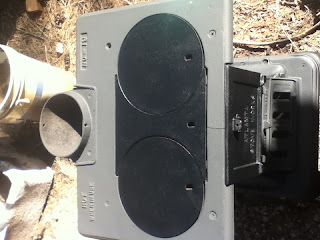 Have I mentioned we spend well over $1,000 on propane every winter? Have I mentioned that I really don't like spending $1,000 on propane? I can't wait to get this into the house and start cooking on it, heating the house at the same time. The plan was, when M. got off work, we would fire it up outside to roast marshmallows and make sure everything worked okay. (Don't you love sentences that start with, "The plan was..." ?)
After lunch, S. was taking her nap, and L. was not. C. was getting squirrely. I decided to take everyone out to collect firewood, while Daddy stayed inside with S. And, as soon as I decided that, the pager went off.
With M. gone, I had to stay home with the kids. The more I listened to the radio traffic, the more I wished I could have been on this run as well, but finally S. woke up and we could all go outside as planned. Got a good pile of fallen limbs together, and we were heading inside to start supper when I heard C. say, "I'll get it out." I turned to see him aiming his finger at her nose, and quickly said, "C., don't pick her boogers!" S. was just as quick to reassure me that he wasn't - "It's a rock!"
Well, tweezers didn't work - it just kept spinning around - and trying to get her to blow her nose just resulted in her sniffing it further up. Radio traffic told me Daddy still wasn't going to be home any time soon, so I packed everyone in the van, called M., who was on her way home, left a note ("Call us. Don't panic!") on the door, and, as soon as M. pulled in and jumped into the van, headed out for the ER.
S. was terribly traumatized. Sang all the way down the hill (rather nasally), happily followed the nurses back without even checking to see if I was coming, and sat nice and still for the doctor (who couldn't get it out with tweezers, either.) Two different suction tubes later, success!
Slight pause.
Nurse: "It's a bean!"
Me: "It's a pinon nut!"
For the after care instructions, the nurse told me to call my primary care physician if we noticed a tree growing out of her right nostril.
We had picked up McDonald's and were headed back up the mountain before Daddy got home and called. Needless to say, we didn't get a fire lit in the cookstove. Something to look forward to tonight!
But, I'm not letting S. hold the marshmallows.