Library Recarpeting - Part 1, or, Don't Stand Too Close to Me, I Stink.

Like many libraries, we have a constant list of things that need to be repaired/replaced/burned to the ground and started over. High on our list has been the carpeting. Approximately 97 years old, it is stained, ugly, worn, and unraveling in parts. And, I'm sorry, but who thought square tiles of carpet were a good idea in a high traffic area??? 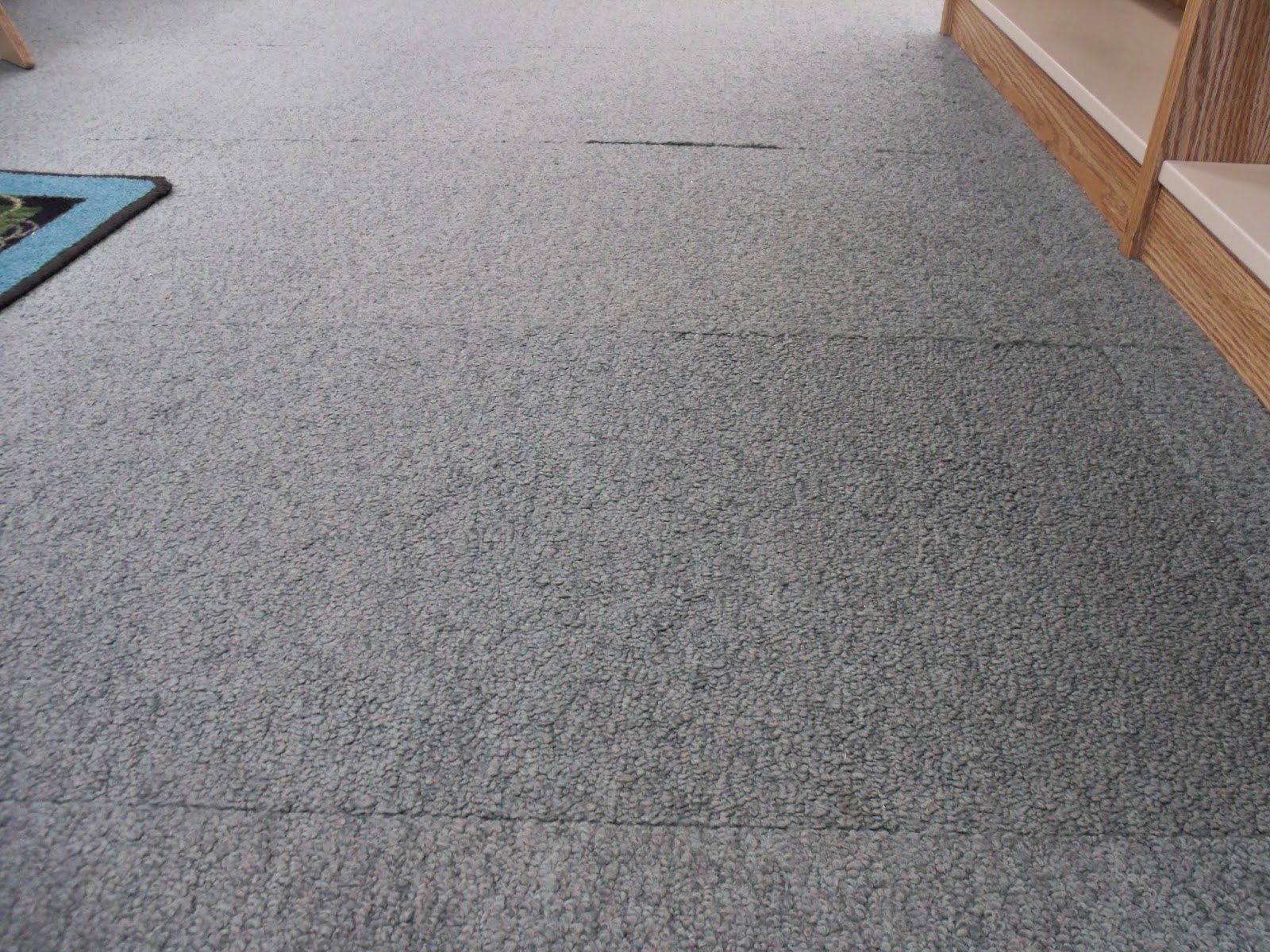 Constant trip hazard when they peel up! Yes, I know, the theory is that, if you get a stain on one square, you can replace it with a 'new' one you have squirreled away somewhere. Except that, a) Nobody has any idea where the extra squares were stored, and b) Squares in storage are no longer going to be the same color as the squares exposed to light/dirt/traffic.

So, a modest amount of money was allocated, with a spending deadline of June 30. The project went out for bids in April. Yep. I'll pause while you look at the calendar.

Contractors from in and out of town have been wandering through, measuring. The staff has picked the general colors we want, and we are hoping to find out in mid-May which bid has been chosen, and - more importantly - how much of the library that will cover. You see, we don't think we can afford to get the whole library done, so the bids are being done in sections. That makes planning a touch difficult - what, exactly, will we have to move?

And, yes, we are moving it all, with a little help from anyone we can bully or bribe. We know the children's room will be first (yahoo!), and hope it will start around May 19.

Summer Reading registration is May 10.

SRP programs start - in the room where we are storing most of the furniture - June 9.

I'll pause while you look at the calendar again. Deep breath.

This is actually like Christmas for an OCD list-maker. Want to see my 3 page typed manifesto of how the books in the children's room will be boxed up? No? Okay, I'll give you the condensed version.

One major goal is to keep books available for checkout as long as possible. To that end, we added shelves on the adult side at a height no human can see, and we are shifting and condensing the adult books as much as possible (secondary goal: job security, because nobody can find anything without asking a staff member now. We pretend we know.) 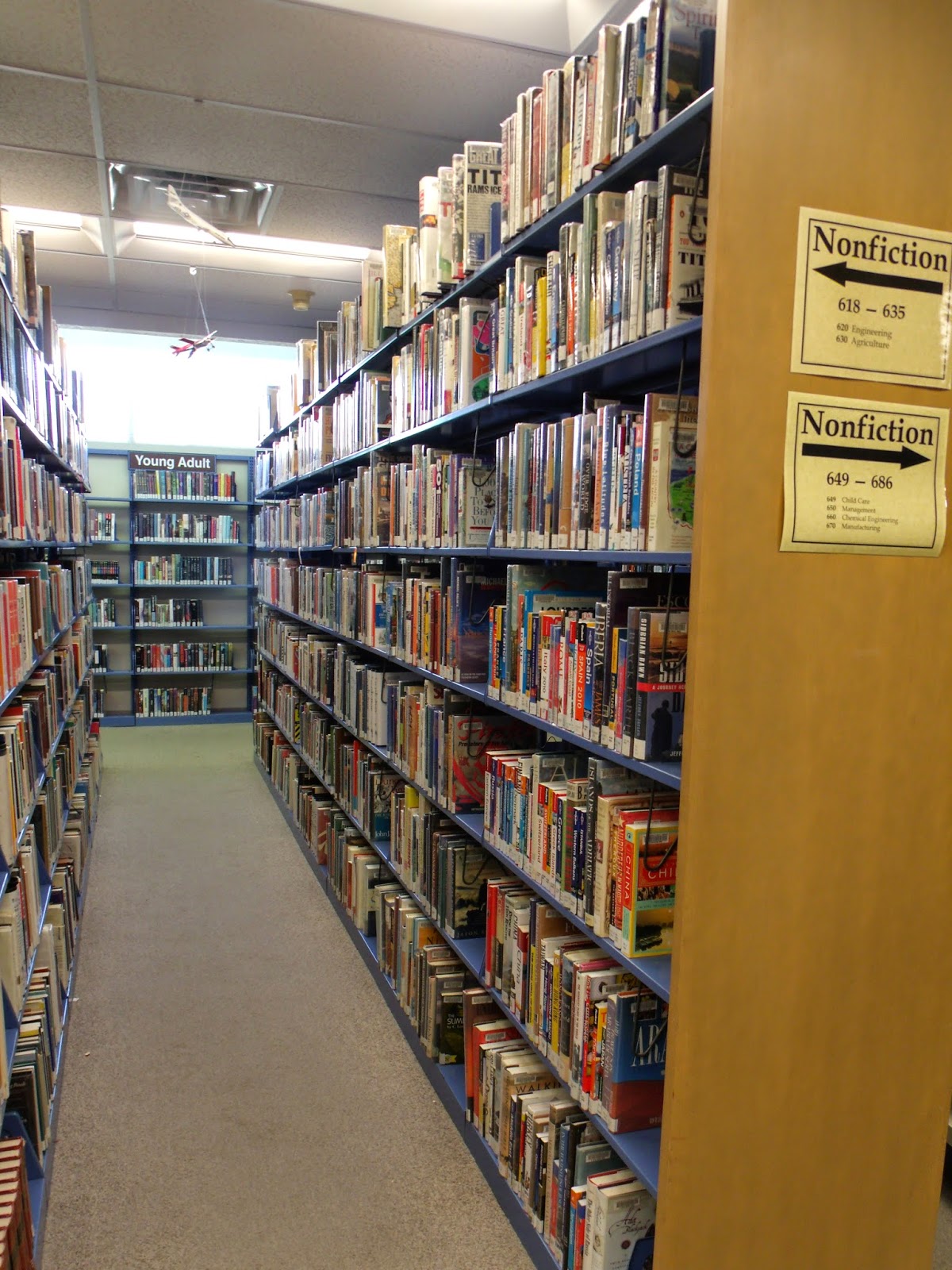 This is very hot, sweaty work, so I have taken to bringing an extra shirt to work. I still stink, but at least I feel like I've made an effort. Staff members are taking turns, 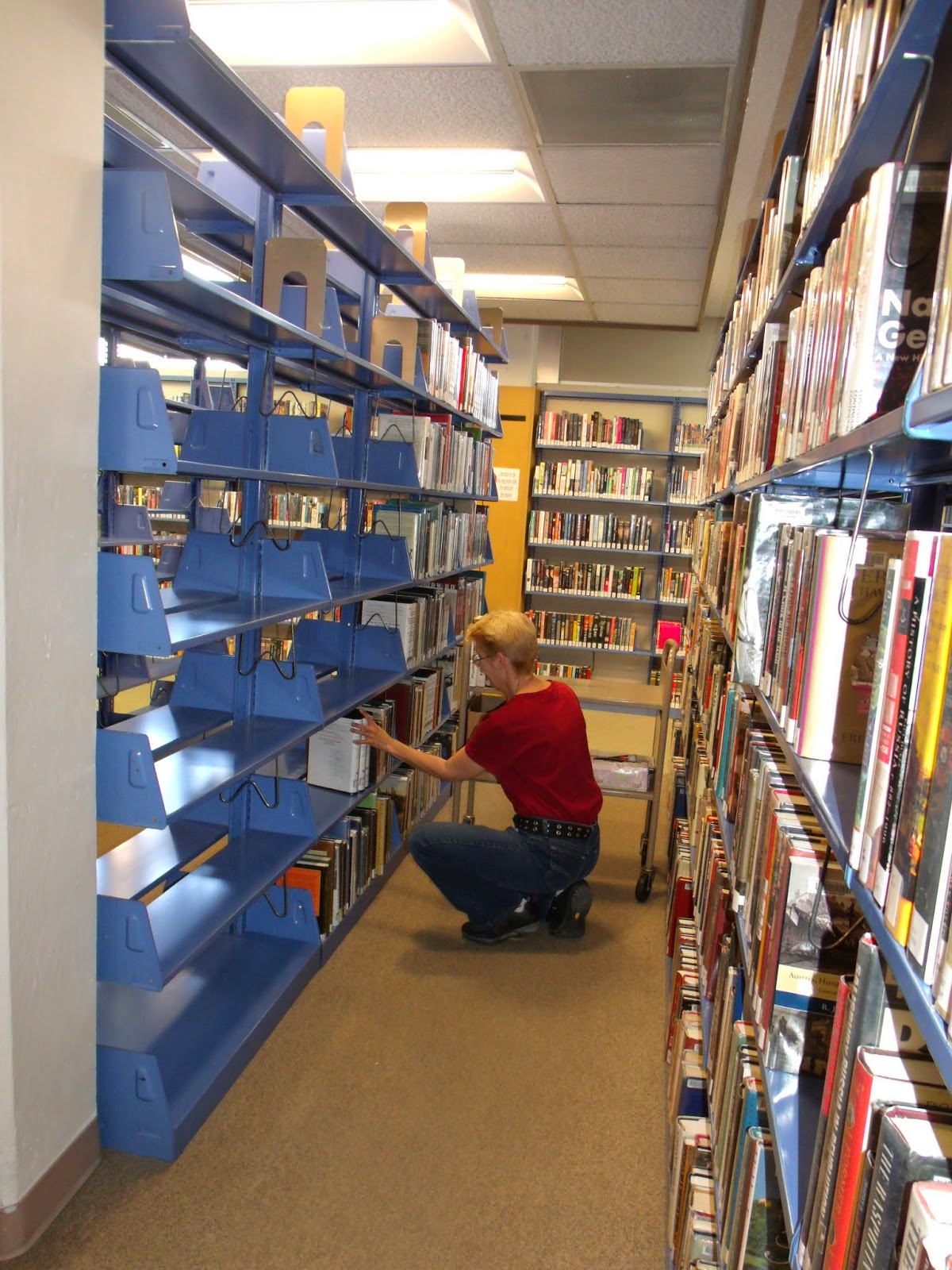 and we have drafted a few volunteers we trust. Hooray for home schoolers!

In the meantime, we are collecting boxes. I counted the shelves in the children's room (478 not counting kits and DVDs) and figured 1.5 boxes for each shelf, so - 717 boxes. Or so. See, kids, you really do use math in the real world! Except, we are shifting some of the kids' books to the adult side once we have cleared some shelves. So we don't need that many. Except, then we will have to box up adult books if we have enough to so that carpet. So we will need more than that. Or, can we put them on the kids' side? No, wait, summer reading, that won't work.

Okay, I have no idea how many boxes we need. But, we're collecting them. 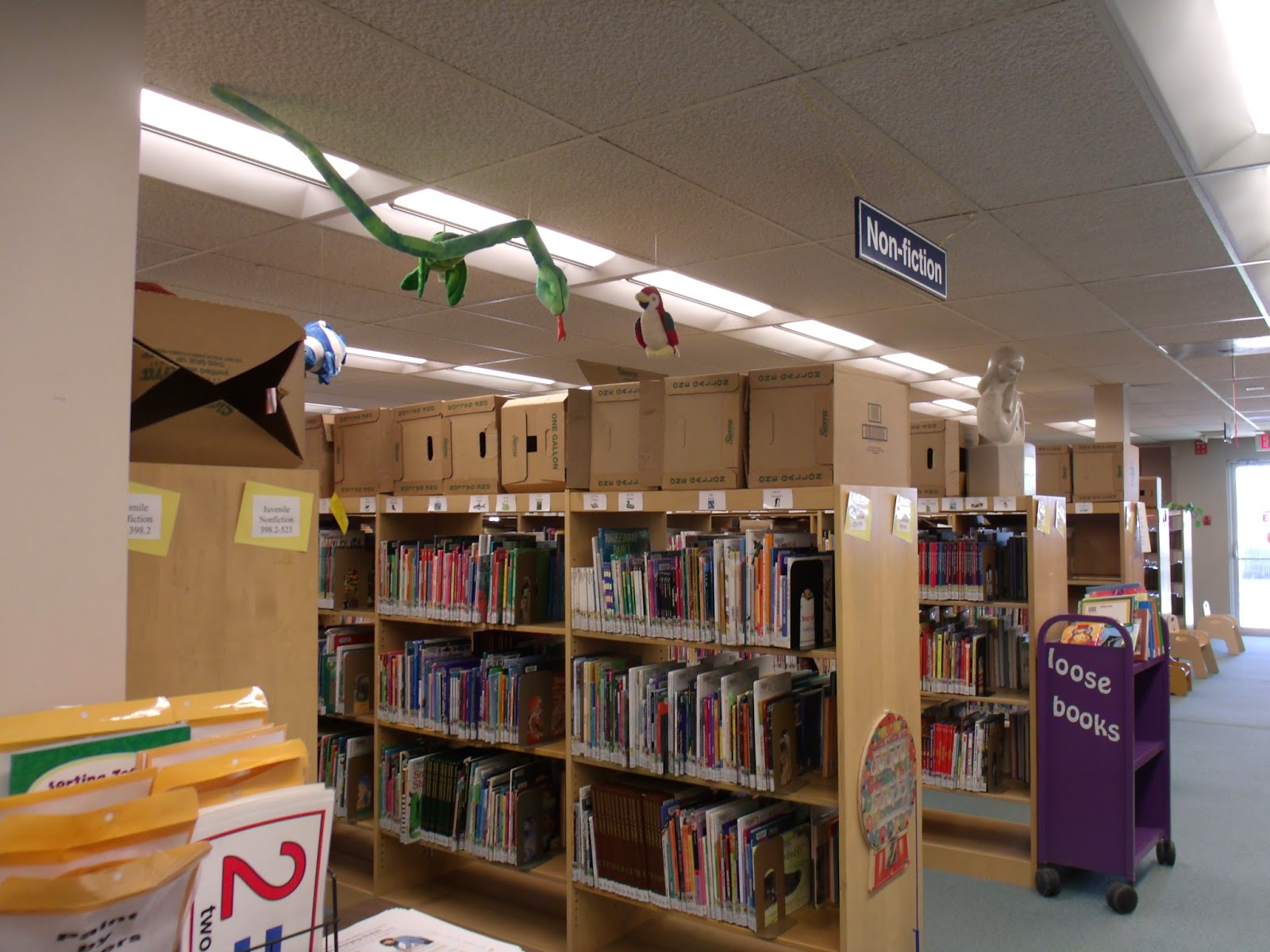 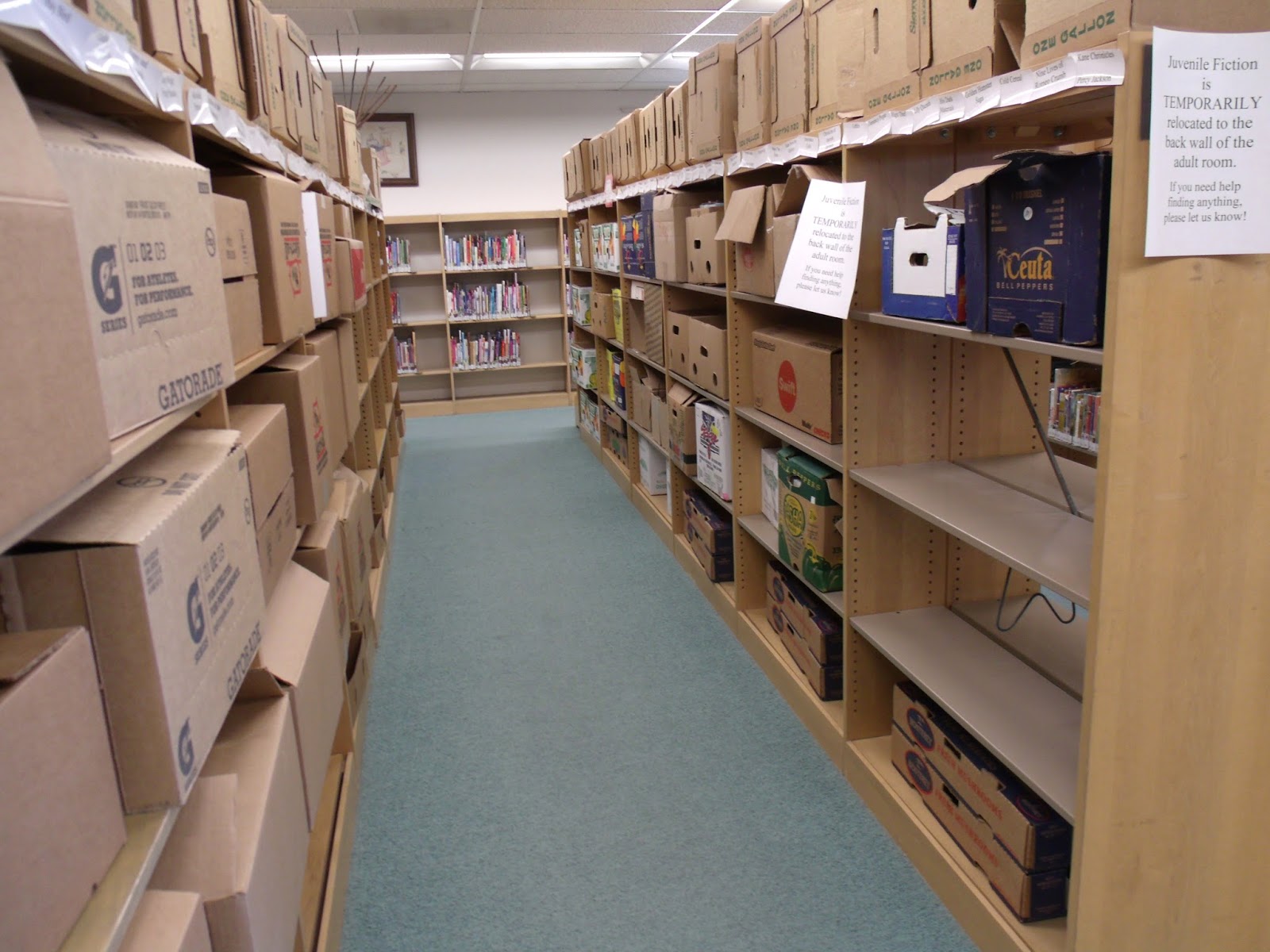 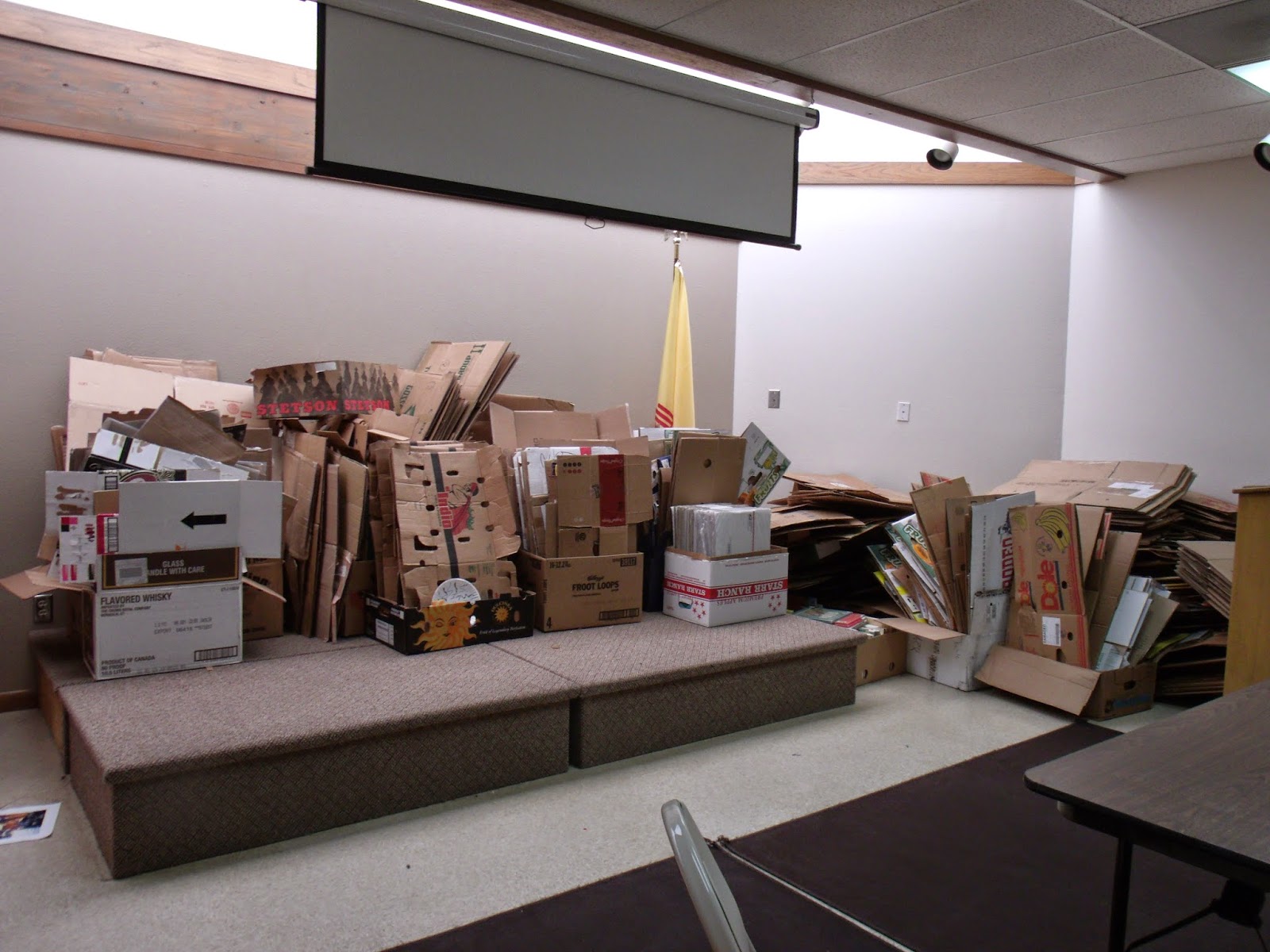 I have started packing up the lesser-used collections - foreign language, Braille, Mother Goose. Here's where the OCD kicks in: every range of shelves is assigned a letter, 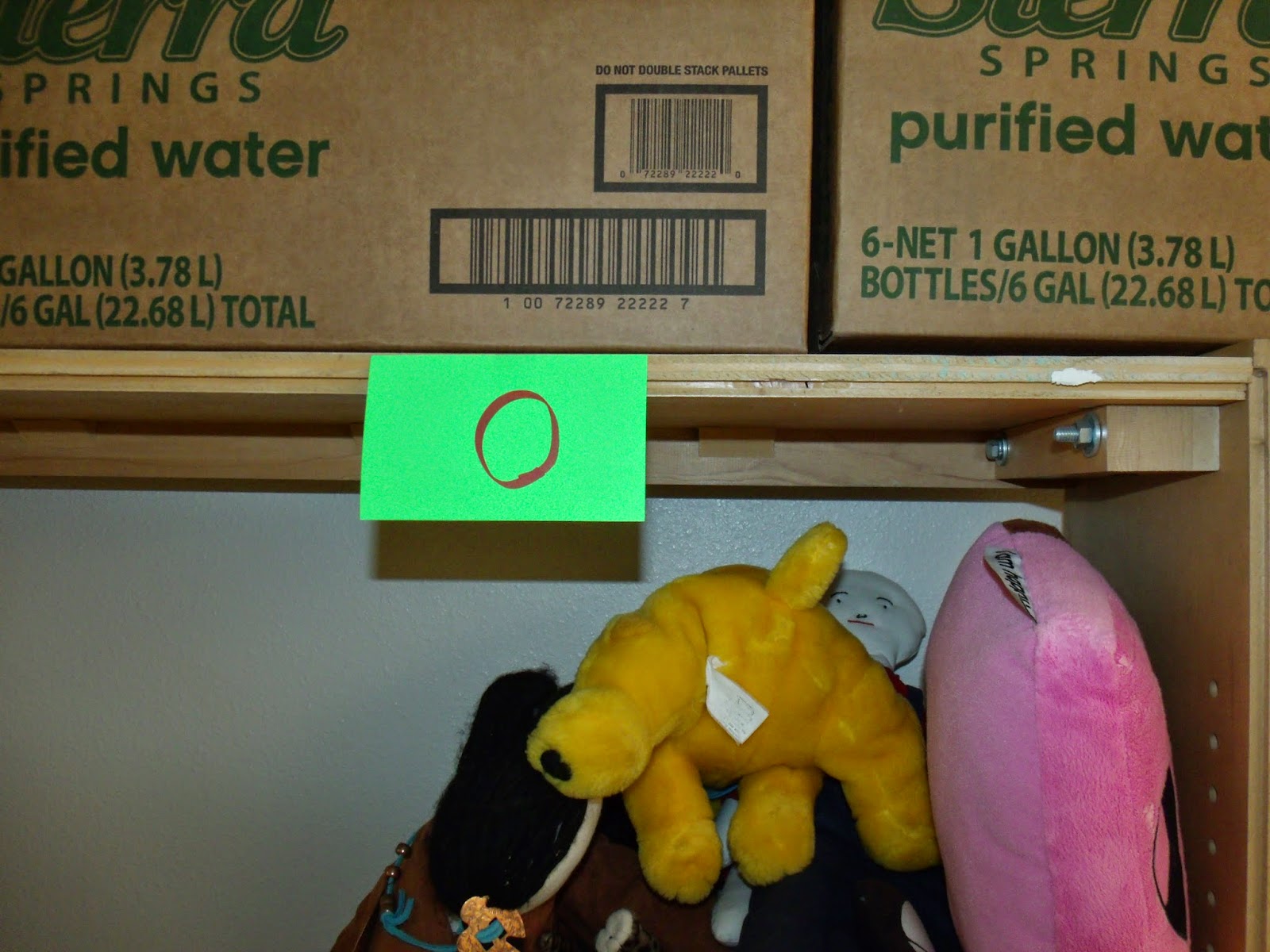 which is written on a map and on the range itself. When someone starts boxing the books in that collection, the boxes are marked with the letter and then in number order. 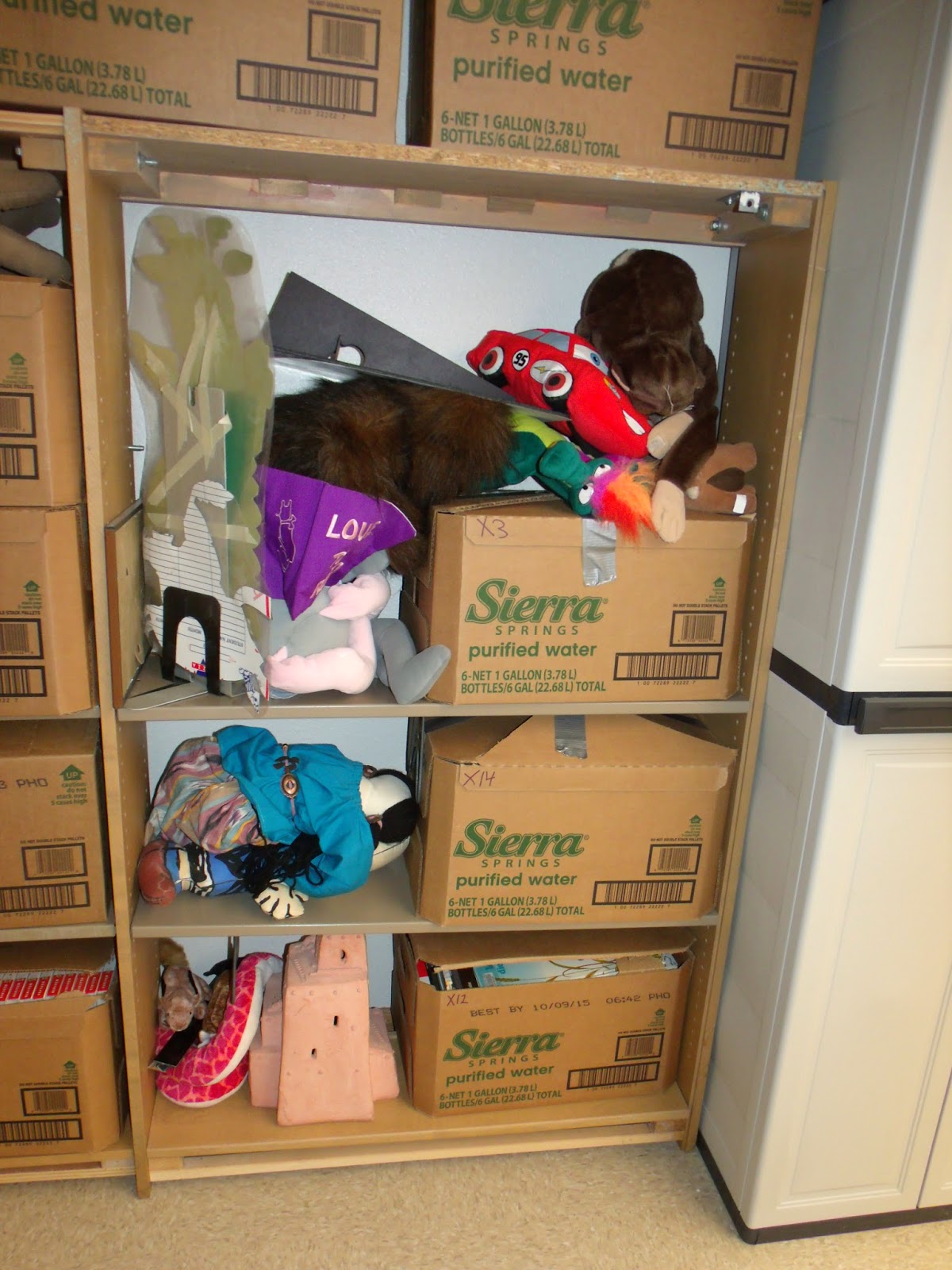 That way, where the box ends up does not matter. When we are ready to put them back, anyone moving boxes can say, "Hmm, this box says 'N5', and that range has an 'N' on it. I will put the box over there." Then the boxes can be emptied back onto the shelves in number order. That's my plan, anyway. If things get a little scrambled within the box, I can live with that- they'll be in the right shelf at least, and we can have volunteers shelf-read throughout the summer. When a range is finished, I am writing the total number of boxes on my map, so we will know if all boxes have been accounted for.

I guard this map with my life.

There is also the small matter of the turtle tank, which weighs approximately 8 tons. It took eight strong adults to move it into the library, and that was with all the water out. Due to a minor miscommunication about when this particular move was happening, we decided to take EVERYTHING out - water, sand, gravel, rocks, and of course turtles. 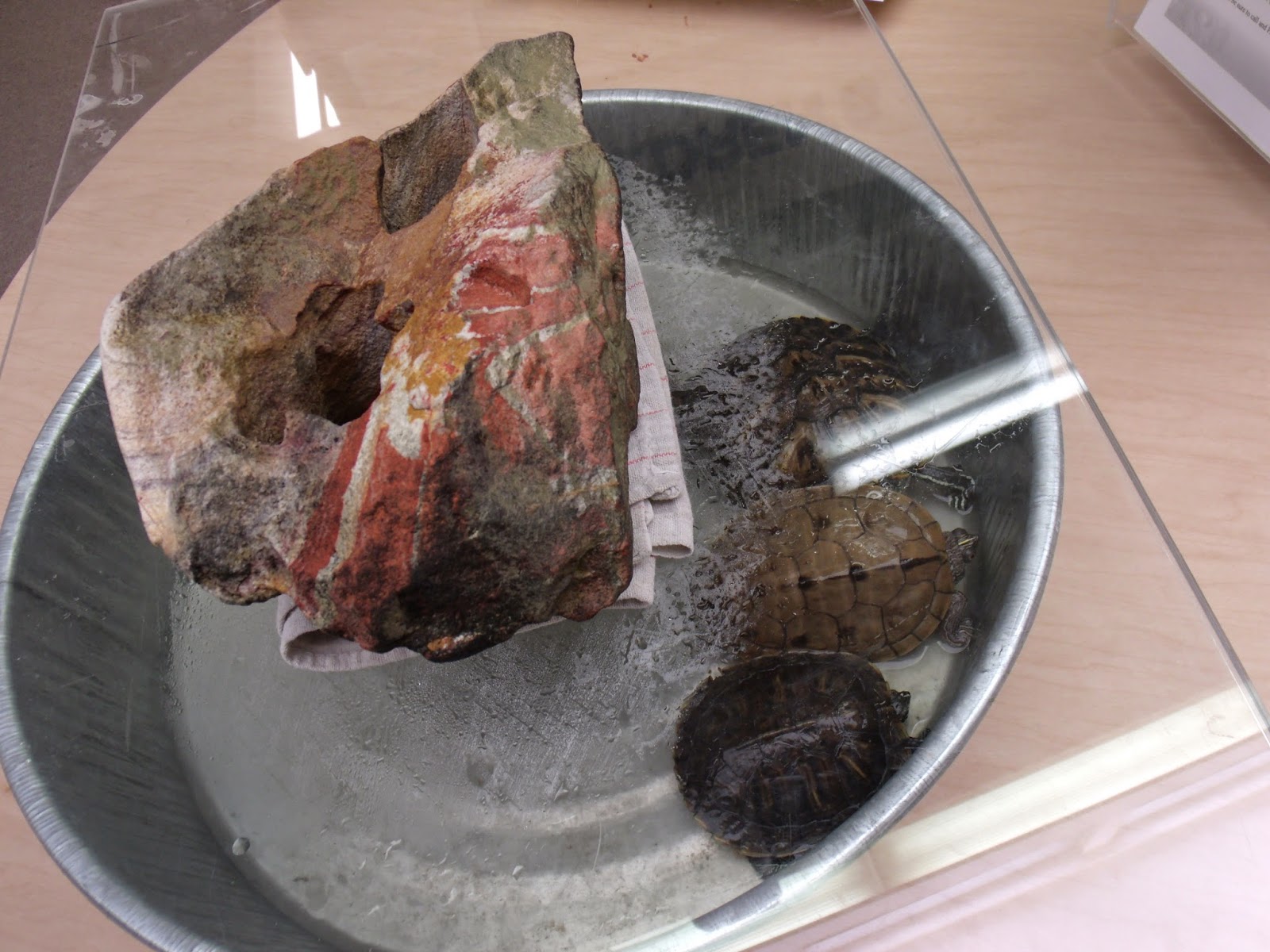 The turtles were less than thrilled, but Doug the Mighty Custodian was then able to move it himself, 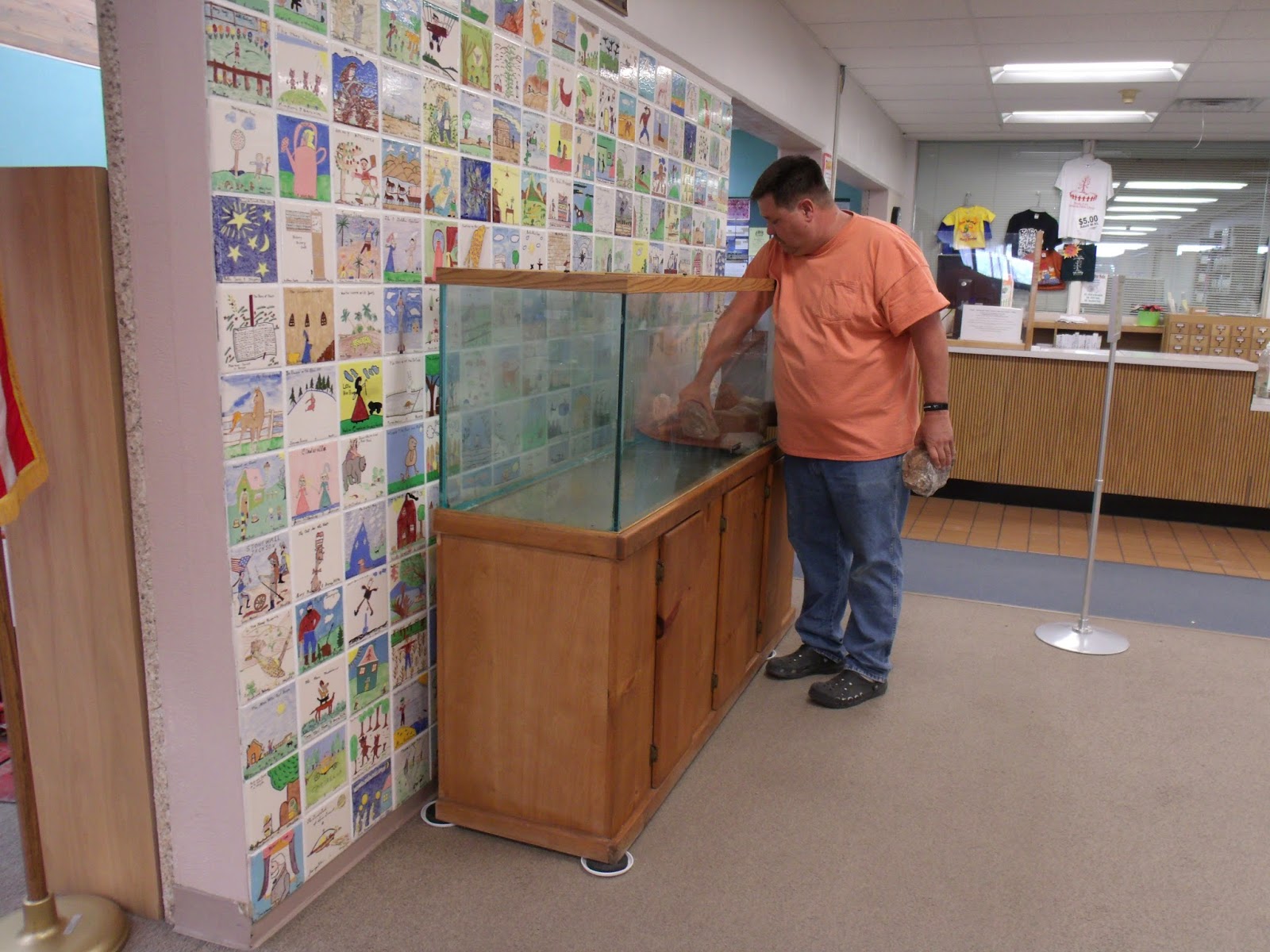 and build them a temporary new rock platform. Once everything is back in place, the tank will get a whole new design, but they can at least swim and sunbathe right now.

So, that's where we are. When I was in high school, they library where I paged hired a professional company to move. Then we hired two college kids to spend the entire summer fixing the mess he professional moving company made. Here's hoping we won't have to do that! Have you ever moved a library, or part of one? What did you find helped/hindered the process?
Posted by Ami at 2:00 AM