We looooooooove Halloween here, and our Family Fright Night is one of my favorite annual programs! It is a popular program as well, and last year the crush of people was a bit overwhelming. I ended up have to rearrange the schedule as we went, shouting stories to a packed room, and didn't get to really visit with anyone. We made a few adjustments this year, and it went much more smoothly.

I am mad at myself about one thing, though - I didn't get pictures of any of the food! Just these absolutely adorable mini jack-o-lanterns that my volunteer created: 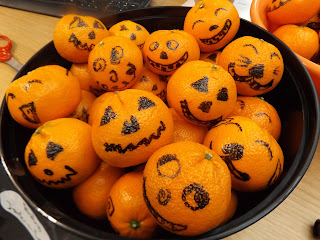 This year we set up the refreshments outside. In previous years they were in the same room as the stories, and people would grab a plate and sit down for the stories. Advantages to having them outside: stories could start without waiting for everyone to get snacks, and no spills inside. Disadvantage: adults filling "to go" bags!! Seriously, people. Sigh. I was afraid there would be a lot of trash left outside, but I only found one styrofoam cup.

In the space where snacks were last year, I put a row of tables with Halloween books to check out, and these characters giving their sales pitches. 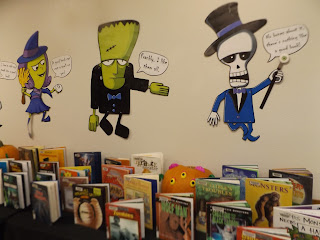 In years past I learned an open tub of candy brings out the worst in people, so I make up goody bags now. Each has EXACTLY the same amount of candy and toys. I asked parents to let me know of allergies ahead of time, so I could have some specially tagged and sitting next to me. They looked the same as everyone else's bags, so nobody felt singled out. (The skeleton is holding bags that are purely toys, no candy at all). 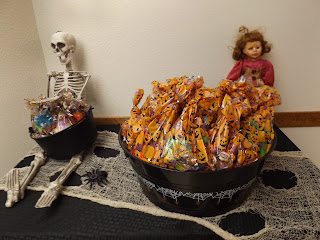 I gave out 108 goody bags, so with adults I would say we had at least 200 people. I gave out the treat bags after each of two story times. Splitting it up worked MUCH better - our room is only supposed to hold 70 people, and we definitely went beyond that (shh!) for the first story time, came very close the second. Everyone was super at listening to the stories and 'helping' me with different parts. I had set up a microphone, but didn't end up having to use it. 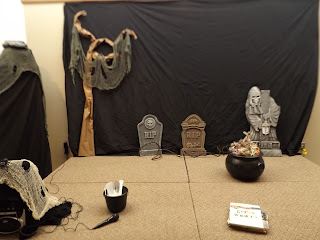 The bucket of "bones" was for a "Skeleton Says" game, to get some wiggles out, but there wasn't time or need for it.

Btw, if you are a new librarian, start hoarding large swaths of black material - sheets, tablecloths, whatever. They come in handy for any sort of holiday, as backdrops, or to cover things you can't move:

I had this cool bubbling water thing, and totally forgot to turn it on. 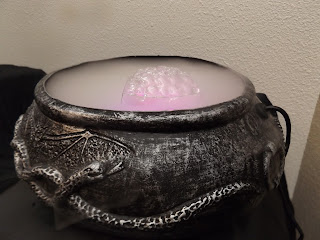 I DID test out the fog machine earlier in the day. Which set off the fire alarm in the whole building. Good news, our staff jumped up and did everything they are supposed to in a fire! Great...er...drill, guys.

I had brought this mirror from home for a program last week, so I just added some decals:

For scary stories I read:
Guess? by Mem Fox (no coaching needed for all the "yes" lines!)
The Doghouse by Jan Thomas (I had the kids whisper in a scary voice, "the doghouse" every time it came up)
The Little Old Lady Who Wasn't Afraid of Anything by Linda Williams (kids helped with all the sounds)
Who Took My Hairy Toe? by Shutta Crum
Games and Crafts! Since we were using the entire library, inside and out, I couldn't set them up until it was almost time, so I used the chairs as a staging area: 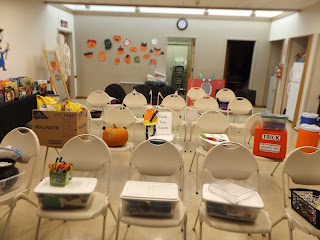 Having a box for each made clean-up easier, too - I just told everyone helping to sweep everything into the box, and I would deal with it in the morning. (Instead, I am posting these pictures...I'll get to them in a bit!)

I got these hands at the dollar store, and had a plastic graveyard fence to go around them, but the ground was too hard to push the fence in! As you can see, we just got the hands in enough to stand up, but they worked. We had glow-in-the-dark necklaces to throw, ring one hand and get a prize. Gabe Professor Snape ran that one. 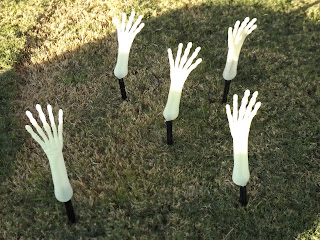 Maui, here (who made the hook himself) ran the spider races. 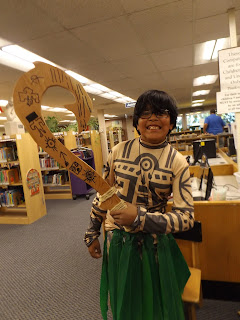 Cheap game, you just need two plastic spiders and a bag of straws. Make a line down the middle of a table with masking tape. Two competitors each get a (fresh!) straw, and at the signal, try to blow their spider to the end first. Winner gets a prize.

We also had the web grab, run by Ellie: 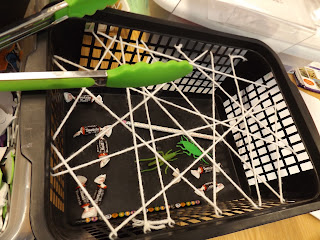 This is the "after" picture! It was full of toys and candy, and you had to use the tongs to get just ONE thing out through the web. 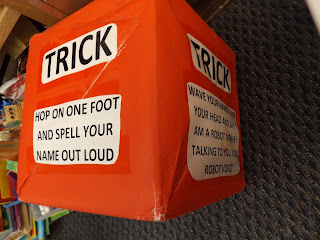 And, Feed the Monster: 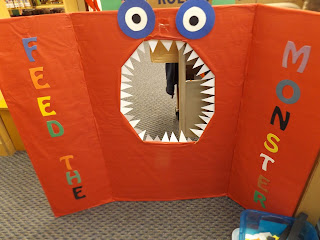 Your basic toss-the-ball game. I was originally using bugs, but since we did it outside I was afraid Senta, who was running the game, would spend half her time hunting in the grass for them!

This Candy Corn Puppet craft was more popular than I expected: 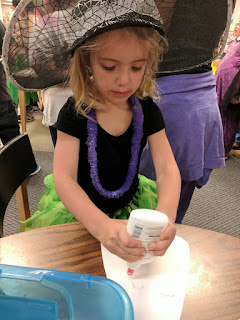 Make your own treat bags: 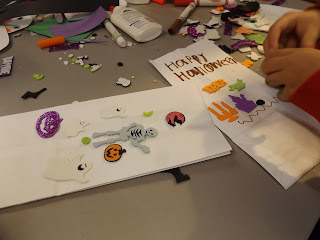 Followed by, clean up your own mess: 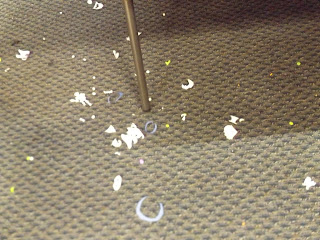 Day of the Dead Masks: 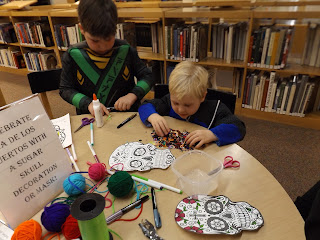 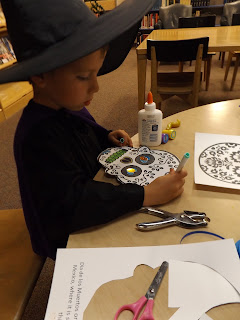 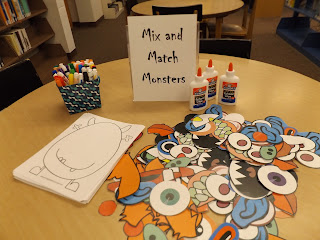 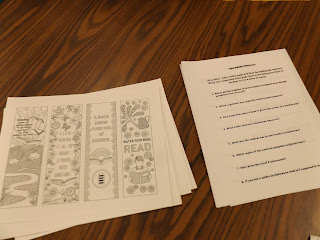 Last but not least, all the cuties in costume! I only got a few, because I was mostly reading stories, but:

Even a furry pumpkin! 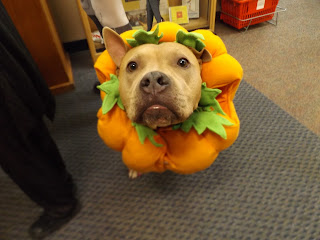 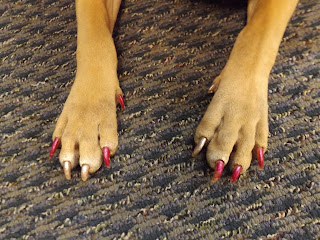 I'm assuming a service dog, extremely well-behaved. For those who do want to bring their pets for something special, though, keep an ear out for details about Santa Pets in December!

I hope everyone had a great time! I loved seeing all the costumed wee ones (and adults). Have a fantastic Halloween!