Reality check day. Grace's turn for a fun day with me, but Grace does better with routines, so we needed a somewhat scaled down version.

We had donuts for breakfast, but at home. A haircut was a priority, so we did that first, while she was still fresh and able to sort-of sit still. She did great! The more she tries to be still, the more she twitches and jumps, but the stylist was fast. Then we bought school supplies - the new backpack made her happy, and she clutched it all the way through the store.

We are continually working on large motor skills, so Alamo Jump was a natural stop for her, too. We got there just as the toddler music time was starting. 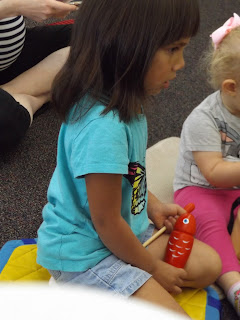 The teacher was great, but Grace just wasn't engaged - she does better with one-on-one attention, so I just let her go play.

She loved it! I thought she might not be able to do things and get frustrated, but her coordination and strength have really improved. 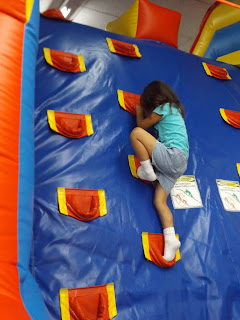 Having nice soft places to land helped with her confidence as well.

Then she discovered the ride-on cars. 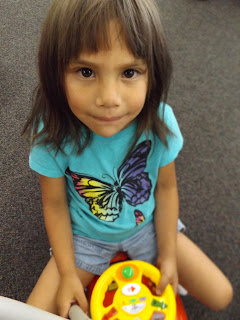 We have a few at home, but the ground is rough, and there are siblings to share with. This was a pretty quiet day, so there were plenty of cars to go around, and lots of space to drive in. She had a blast! An hour and a half of running and playing and shrieking.

Unfortunately, as parents of kids with fasd know, there can be such a thing as too much fun and excitement. Any preschooler will have a crash after a lot of excitement, but kids with fasd don't do anything halfway. It started when she told me she had to go potty - great! We worked really hard on the potty training this summer, and she finally got it! So we headed right to the bathroom.

She wanted to drive her car into the bathroom. No, sweetie, we will leave it outside the door, and you can have it right back.

Five seconds later, she is naked and throwing things in the bathroom, yelling "NO! DON'T WANT TO!" Took several tries to get her on the potty, then dressed again, at which point I calmly told her it was time to go.

Face down on the floor at the shoe rack, screaming. I just grabbed her shoes and carried her out. At this point it was at normal-toddler-level-tantrum, but by the time I got her strapped into her seatbelt, she was doing the horror-movie scream. over. and over. and over. No breaths in between. All logic and communication ability gone. All you can do at that point is let her wear herself out and make sure she doesn't hurt herself (which she often tries when she is in this mode.)

When we got home (a 25 minute drive) she was quiet and sweet and talking in full sentences and ate her lunch nicely and put herself down for a nap without being told. After nap, she had a fun time playing with the toys all by herself, and we chatted and were silly. She was an absolute delight.

And then at bedtime she smeared poop all over the bed and the carpet.

Gracie is a sweet, pretty girl, who loves to be with people, has plenty of energy, wants to please. And she will always struggle to have what everyone else takes for granted, because her brain was damaged by alcohol before she was even born.
Just. not. fair.