I already sort-of-reviewed this book more than a year ago, although I forgot to post an update after we tried the first recipe (it was FANTASTIC!) I had put the book on my Christmas wish list at the suggestion of Amanda at A Patchwork of Books, and it has since become one of my most-used cookbooks. That's saying a lot, because I'm kind of addicted to the things! 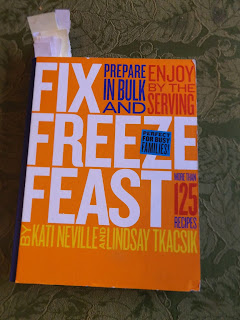 One recipe isn't much of a review, though. What if I were to make...every single recipe in it? Or, at least give it a good try?

I have this week off, and after our family camping trip, I have been dropping the kids at Grandma's in the morning and then heading back home to get things done completely uninterrupted. Those of you without children, feel free to look perplexed. Trust me, this is a vacation.

I love freezing meals and cooking in bulk, but my meal freezer has been looking a bit bare. I started watching sales on meat a few weeks ago, and stocking up. Thick boneless pork chops, $1.37 a pound? I'll take all of them, thank-you. And then bug the butcher for more. 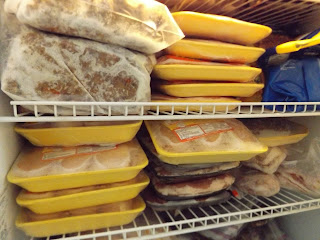 Make a list of ingredients I don't have on hand, one more shopping trip, and I'm ready to go! 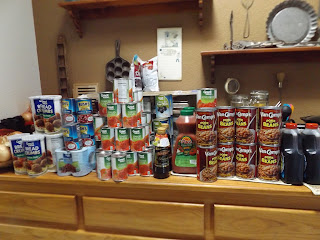 Obviously, I couldn't taste-test every recipe immediately to give it a full review, but I'll give a few comments on the directions as well as a tip or two. I will come back periodically as we go through the freezer, and add what we thought of the meals themselves. I won't include exact recipes, because that's what you need to buy the book for!

I had already made the chicken cordon bleu, and the cherry skillet chicken. The first was excellent, the second I didn't really taste the cherries.

Chicken Broccoli Bake - I made 3 meals, and we ate one that night. It was okay, not something I would rave about. That was mostly a personal taste issue, though, there was nothing wrong with the recipe.

Chicken Curry - Good thing I have two of the biggest skillets they make! 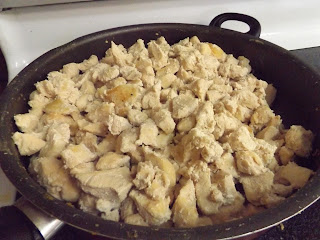 I periodically adjusted amounts for my family size, and for how much was in my trays of meat. This made four meals.
Update - yummy! A good staple meal, I adjusted the spices slightly because the kids aren't too into 'hot'. We have had this one several times, now.

While I have been bulk cooking for a while, I think one of the beauties of this book is that the recipes are so easy to follow, with built-in tips like, "while the chicken is cooling". They help save you time in the kitchen, without being an obvious extra instruction. I also appreciate phrase like, "mixture will be like a paste", so you are not standing there wondering, "is it supposed to look like this?!" Most recipes have 3-5 steps for preparation, and 2-3 steps for cooking it later (step one almost always being, completely thaw the entree). There are also serving suggestions or shopping tips on most pages.

Here are those first two recipes, ready to go into the freezer: 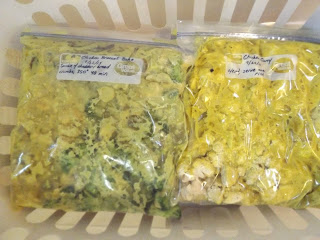 Some tips here: completely cool before putting in the freezer, or you will end up with ice crystals. I am fortunate enough to have two large freezers (okay, three, but who's counting?), so I can freeze the packets flat in one freezer, 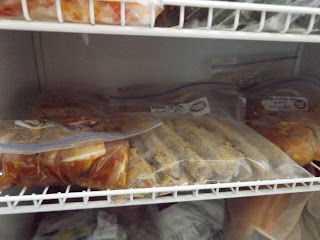 Then transfer them to the other when they are solid. Never put warm items on top of already frozen ones, you'll end up with a thawing-and-refreezing cycle that ruins the texture, if not the taste.

Molasses-Rum Chicken - My shopping excursion included the biggest (but cheapest) bottles of rum, bourbon, whiskey and margarita mix, as well as a 4-pack of cheap beer. The cashier was, of course, one of my former students. I told her she drove me to it. This smelled wonderful, and like many of the meals, required no cooking now - just toss it all in baggies and pop it in the freezer. We will have to try this soon - it says to grill, but would probably do well baked, or maybe even in the slow cooker.

Update: very good - I put it in the crock pot, so it was tender and falling apart when I got home. We used the leftovers with some onions and cheese for burritos, another quick and easy meal.

Sweet Asian Chicken - This should be a kid pleaser. I think I will use it in a stir fry, waiting on an Asian Pack from Bountiful Baskets to come along.

Update: BB took too long, so I bought a freezer bag of stir fry veggies when I was in a hurry. Blech. The chicken was great, though! I'll try it again with fresh veggies! 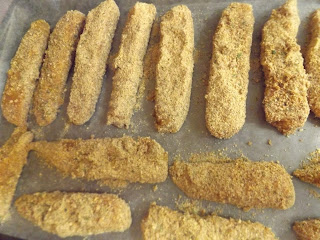 On a salad, maybe? Or, with a blue cheese dip?

Mediterranean Roast Chicken - I have the feeling this is one I will like more than certain other family members (kalamata olives? capers?) Maybe I will cook it for myself some night when Daddy makes his seafood gumbo! (I don't eat things that swim.)

Update: the olives just added a little tang to the chicken, so everyone was happy eating that, and I scooped most of the cooked olives onto my portion.

Another tip: If you know what you are making, and how many entrees, you can label your freezer bags before you start the whole process. Otherwise, any down time (like when meat is cooling - or when you just need to sit down!) you can label the bags according to how many meals it looks like. If you ever forget to label them until after you've filled them, you won't make that mistake a second time.

**Note: the book comes with instruction labels in the back that you can copy and tape to your bags. I move things around too much to trust those to stay, but if you find you make something a lot, they may be worth printing on heavy paper and laminating! 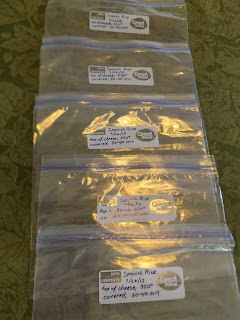 Mozzarella Meatballs - Homemade meatballs take FOREVER (or at least it seems like it when you are forming ball after ball and the bowl isn't looking any emptier), but they are so worth it! Once you have made your own meatballs, you won't be able to stand the mush from the freezer section ever again.

These are formed around a small cube of mozzarella cheese: 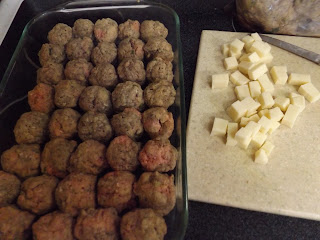 and yes, I definitely had to taste-test one. Or more. YUM!!! This recipe includes a sauce, but they could be eaten alone.

As you can see above, I bake my meatballs in a glass pyrex dish. Most recipes call for cookie sheets or even muffin tins. I like these because they are easier to wash, the meatballs cook evenly, they don't stick, and I can go in a couple times and suck grease out with a turkey baster (if you do this, keep in mind that your dollar store baster may not be rated for hot grease - melted plastic is not a good food additive!)

Update: The sauce overpowered the meatballs. Next time, I will make them without.

Sweet and Sour Meatballs - Wait, I don't have pineapple tidbits? Oops - substituted crushed pineapple combined with pineapple slices I cut up in the can (for the sauce). I also added strips of orange bell pepper, because I needed to use some up, and because it looked pretty!

Update: the substitutions didn't hurt a bit. Froze and re-thawed really well, texture was fine and nothing stuck together. Served over minute rice, stirring the sauce into the rice.

Classic Chili - You can't really go wrong with chili, and I liked that this used two types of beans. I will probably heat it in the slow cooker.

Update: This was too bland for my taste. I will add more spices, maybe some liquid smoke, to the other portions.

**There are many great recipes involving various cuts of beef, but none of those have been on sale lately!

4B's Grilled Chops - Pork chops in the freezer are awesome, because it's mostly just toss-it-in-the-bag-and-freeze style, and they don't take long to cook when you get home at the end of the day. This is where the cheap beer came in.

An's Pork Chops - I found the marinade didn't quite make enough for my liking, so I doubled it to make 4 meals. I don't like the smell of sesame oil, so I may use less next time, but it did give us a meal with a different flavor.

Update: these turned out better than expected, everyone liked the flavor, and the sesame oil wasn't obtrusive at all. I'll keep it in!

Cajun Braised Skillet Chops - The breading barely made it through the last chops, but I may have been putting it on a bit heavily. Definitely not a way I have ever prepared pork chops, so I am looking forward to trying these.

Margarita Pork Chops - Generally my drink of choice, so I couldn't not make these!

Update: Not enough lime flavor to my taste, I'll add more next time. Made in a pan, turned out a bit dry - maybe add some butter when frying?

Apple and Cranberry Pork Loin - Ever start putting a recipe together and, no matter how carefully you have planned, realize you don't have a key ingredient? Well, that's one of the perks of freezer cooking - you can get it later! 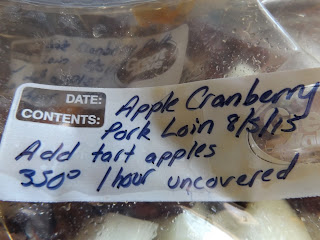 By the way, I label these with instructions that would make sense to me. If I were labeling them for someone else - my smart-a** husband, for example - I would be more specific. Starting with, "take contents OUT of plastic bag."

Update: I'm not sure that the apples made a big difference. I cooked it in the slow cooker - an hour on high, then the rest of the day on low. The meat was excellent, and I liked the cranberry/onion flavor combination!

Austrian Pork Goulash - Another classic tummy filler! Anything with this much onion and garlic: 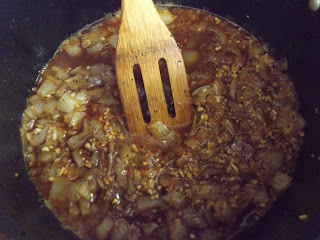 definitely has a place at our table.

Update: Logan asked if he can have this in his lunch when he starts school next year. I think that says it all. 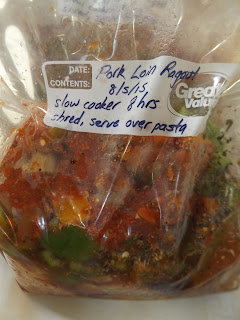 The SMELLS from this sauce and spices made me want to dive in right there!

Sticky Drunk Pig on a Stick - You know you have to try something with a name like that. I did not add the onions, because I plan to skewer it with big chunks of onions, and probably other veggies, and I like them fresh and crisp. (And at 1 1/2 cups bourbon for three entrees, that pig is indeed well-inebriated.)

Update: I cooked this at home with onion chunks, green bell peppers, and grape tomatoes, and then brought it to my mil's for dinner. Very well received!

And, that is where I ran out of meat - and freezer space! 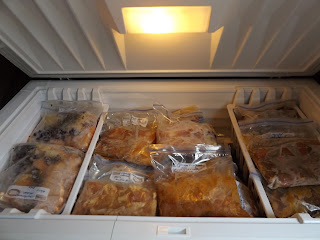 Still many more recipes I want to try...and ribs are on sale for $1 a pound...and I haven't even touched the sections on meatless main dishes, sides, soups, breakfasts, snacks...

This fantastic book also comes with tips for shopping in bulk, adapting recipes, prepping, cooking clubs, shopping lists, and more! It really is the perfect resource for someone who really wants to get into bulk/freezer cooking and isn't sure where to start!


At least three months of meals in just a couple days of prepping - not too bad! Bring on the zombie apocalypse! (Just don't cut my power - eek!)

Email ThisBlogThis!Share to TwitterShare to FacebookShare to Pinterest
Labels: cooking in bulk, fix freeze and feast, freezing meals, In the Kitchen