You're Turning How Old?

Daddy has a birthday this week. He is terribly happy about that. (Now, where did my sarcasm font go?) This is one of those birthdays that end in a zero, the ones that everyone else looks forward to a lot more than the person actually having the birthday!

Of COURSE we had a party, and we (M. and I) started planning it a couple months ago. It occurred to us that while fifty seems like a large number (a VERY large number), part of it is the zero, and zero is nothing.  So, if you think about it, Daddy is just turning five. 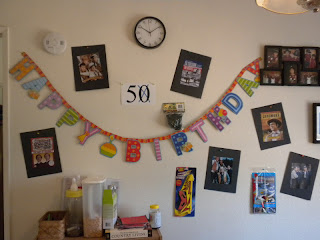 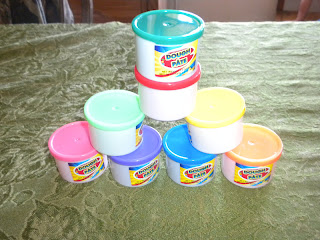 And Play-Do. Which makes for a colorful centerpiece. 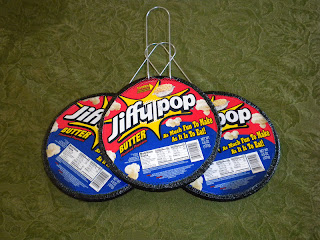 The little ones got daddy a can of... 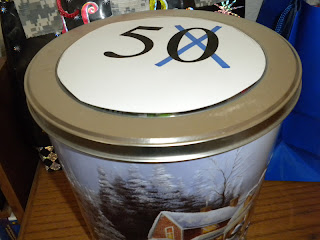 1960's favorite candies. I notice the cinnamon toothpicks have already disappeared. And no, he does not have to share with anyone. 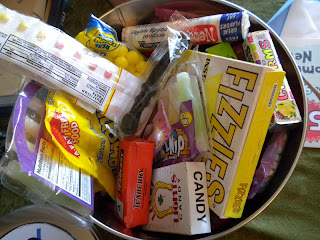 He got both a cap gun and an airsoft gun. 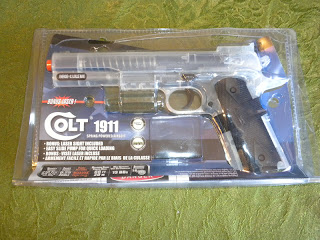 He already has plans for this present, and a certain group of elk who won't leave the yard most mornings. (He throws sticks at them, and they go over and sniff the sticks. I am waiting for one of them to fetch the stick and bring it back to him.)

Of course, there were other, more useful presents. 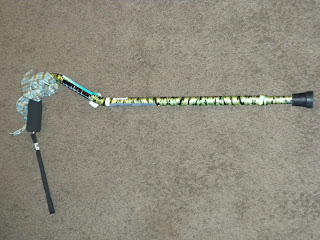 It's camouflaged, so nobody can tell you're using one! 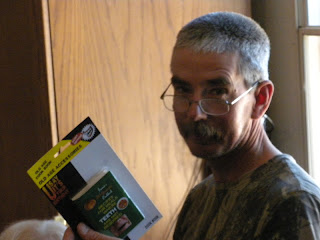 Recipes for people with no teeth. 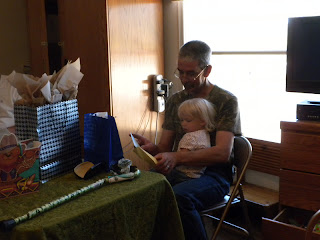 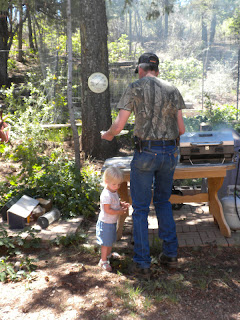 She helped make the burgers, too.

We also had a baked potato bar, with lots of fixin's. 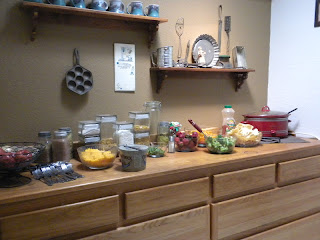 You're right, I just like taking pictures of my 'new' kitchen. 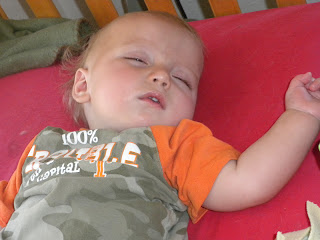 L. was less than impressed by most of it. If he had known there was going to be ice cream, he would have woken up sooner - so, it's just as well that he slept!

S., on the other hand, decided that Cousin B. - who she absolutely loves - was suddenly the enemy. The whole time we were eating, she had a hissy fit if he so much as looked at her (literally - "Daddy!!! Somebody is looking at me!!!") She was munching on an onion and announced, "I like onions!" B. said, "I like onions too." S. gave him the stink-eye, put it back down, and announced, "I don't like onions." (It should be noted that, at naptime, B. was one of the first people she God-blessed.)

I can't believe I forgot to take a picture of the cake. World's easiest cake to decorate - Daddy prefers them plain, no frosting, just butter if it's hot out of the oven. I put out a can each of chocolate and vanilla frosting, so people could frost their own piece. For toppers, we usually choose whatever toys the kids like to play with, and everybody I asked - including Daddy - said he liked to play with the same thing when he was five. So, M. and S. went out and found a handful of sticks and rocks, and we washed them off, and plopped them on top. Done.

And the best part? It will be nine more years before my 50th birthday, and cousin M. didn't buy him enough memory pills to last that long. Happy birthday to my favorite guy, however old you may be:)