So, I have made it past the "Can I donate a kidney?" phase, and now we are moving on to, "Who will I donate it to?" Not that I will know the person's name (unless they want it shared with me), but there are over 100,000 people on the waiting list - how do they decide which one gets mine?

The UNOS list has rankings based on several different factors such as:

So obviously, the list is not a static thing, and changes according to the donated organ in question. A computer determines the list order, not a human.

From their web site: "Only medical and logistical factors are used in organ matching. Personal or social characteristics such as celebrity status, income or insurance coverage play no role in transplant priority."

My blood type, O positive, means it's a good candidate for just about anyone on the list (positive and negative Rh are not a factor with the kidney - new thing learned this month!). Blood type is not the only important match, though.

Tissue typing is done next. That sounds like they are taking a sliver of you from somewhere to examine, but it's just another blood test! While I was at UNM in October, blood was taken to find out which antigens  my blood has. There are six, and the more of those that match the recipient, the more successful the transplant is likely to be.

Once a good candidate is found on paper, a final test (called cross-matching) is done to make sure the antibodies in the recipient's blood aren't likely to take one look at this foreign object from my body, decide it is a dangerous intruder, and attack it. A small amount of the possible recipient's blood is mixed with a small amount of my blood, and we (well, the people with the microscopes) watch to see if they try to kill each other, or if they invite each other over for coffee.

Of course, it wouldn't be very convenient for anyone for me to run up to Albuquerque every time they need a sample, so The National Kidney Registry sent me a cute little kit in a box. 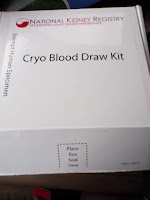 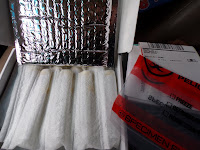 I had eight vials of blood drawn at a local lab (not the same one that said I was pregnant),


and those vials were overnighted to their lab in California lab. They will be stored there, and used as needed until they have a match for sure.

Once that is settled, the next steps of the chain can be put in place, and more people will be getting the phone call they have been waiting for! Exciting!!

And here's a cool video I found when I was showing the kids what is going to happen!