Many people think librarians get to read a lot.  Hardly! Add in having five kids at home, and much of my reading time happens sitting in my car in slow drive-through lines.

I'm sure many people (read: Moms) are in the same position, not having nearly enough time to read, uninterrupted. Can you imagine having a few days to just lie in bed and read? Bliss! I'd give my left kidney for that!

Or my right. Whichever. Which is how I found myself, a little while back, spending two days with some very nice people at UNM Hospital in Albuquerque, New Mexico. 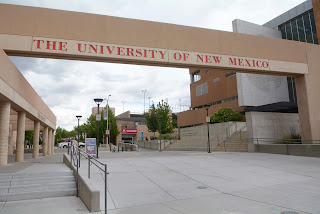 I have registered for things such as bone marrow donation over the year, but I have never been contacted. When I came across information about the National Kidney Registry, I went online and filled out the forms, thinking it would probably be the same.

I was pleasantly surprised when I soon got an e-mail asking if I would be willing to take some initial tests. They sent me a urine collection kit, I peed in a bucket for a day, I dropped it off at a nearby lab and they took some blood - took about ten minutes of my time.

About a week later, I got a call at work from a delightful woman named Ana Maria at UNM in Albuquerque. She asked if I would be willing to drive up some day for further testing. She was more than willing to work around my schedule, and since I am off every other Friday, it was easy to pick a date that worked for everyone. She and Mila, another woman I quickly became acquainted with, were wonderful about answering any questions I had, and even those I didn't. They helped arrange for lodging, and sent me a detailed schedule, complete with maps and names and directions, both by e-mail and by snail mail.

What struck me most about that first conversation was how surprised she seemed to be, to be talking with someone who was willing to be a living donor, and who wasn't a friend or relative of a kidney patient. That made me sad. Yes, it's a bit more than just donating blood, but you are talking about saving a life! Why don't more people at least take the first steps and look into it?!

Seriously, I have always tried to teach my kids to help people whenever they can. Heck, it's the second thing written on our stairs.

Sometimes that means bringing someone a meal. Sometimes it can mean something bigger.

So, back to my visit. I ended up taking one day off work and went up Thursday, so that the psychiatrist wouldn't have to come in on his day off. Yes, they want to make sure you aren't completely crazy. I guess my brand of partially nuts was deemed acceptable (I did get him to actually use the term 'batshit crazy' by the end of our session, although he refused to say it described me.) Basically, he asked a little about my life, made sure I had thought things through, had decent coping skills and a support system, etc. He went over some of the physical and psychological risks, which everyone does at every single step of the way - they want you to be SURE, and well-informed. He told me several times to ask as many questions as I could think of, of anyone I talked to.

I got a child-free night in a hotel room, long enough to confirm that I have not missed a single thing on TV in the past ten years, write a few book reviews for Cybils, and get 10 months of photographs in order in an album.

Friday was the busy day. I had a fasting blood test at 7, so I gazed longingly at the free breakfast being enjoyed by balloon crews (Balloon Fiesta weekend in Albuquerque!) before leaving the hotel. I was first in line when the lab opened, which was good because they were short-staffed and almost immediately running behind. Two pokes I didn't feel, 14 vials of blood, and a fill-this-cup-please, then I finally got to go meet Mila and Ana Maria, the living donor advocates at UNM. They are just as sweet in person as they are on the phone! Another very nice woman was there hoping to donate to someone she knew, so we went through the initial class together, taught by Mila.

Again, they want to make sure you are VERY well informed, about benefits and risks. Mila provided UNM's stats, which are better than national averages, and either answered our questions or told us who to ask along the way. Throughout the rest of the day, people would randomly ask us what we had learned about the risks, down to percentages - they want to be SURE you are sure, and you are not going into anything blindly. (There is a .03% chance I could die on the table. Getting back on I-25 was riskier.)

We both went down to get our EKGs, which took approximately three minutes each - no exaggeration. Then we took turns with the dietician Christine and Ana Maria. The dietician seemed happy with everything but my two sodas a day habit. I promised to TRY to drink more water, and she had to be content with that. Ana Maria went over more of what to expect, again making sure I had plans and support in place during my recovery.

Next up was a chest x-ray - I may actually learn my way around UNM by the end of all this! - about ten minutes, you just have to take bra and jewelry off and stand in a couple different positions. From there I drove around the corner to a different buildings (about 5 minutes, counting stop light) for my CT Scan. That took a little longer, and was...interesting. Heads up: the contrast dye will make you think you peed your pants. You didn't. Probably. But the bed part was so soft and comfortable, I would have happily ridden back and forth for an hour, taking deep breaths and holding them for the disembodied voice (which also belonged to a very nice lady. Seriously, kudos to UNM for having such amazing, friendly staff all over!)

Back to the main hospital for a visit with the nephrologist, Dr. Argyropoulis. My spellcheck says his name is spelled wrong, but it also doesn't recognize 'nephrologist', so... Everyone told me I could "just call him Dr. Christos", because "nobody can say his name." Challenge accepted! I practiced it all day, and he says I said it right - he may have just been humoring me.

There I got the bad news that my blood sugar test from that morning had been a touch high. That meant I have to take a blood glucose test later this week, so I don't know anything for sure yet. My kidney function was good, though (95), as well as all the other results they had, so - fingers crossed!***

If all goes well, I will be starting what is called a chain donation. My kidney will be given to a waiting recipient who is determined to be the best match. I am told getting the call that you have a living donor match is like winning the lottery - any viable kidney would be great, but one from a living donor is so much better!

A friend or relative of that recipient, who wasn't a good match for them, instead donates their kidney to someone else on the list. That chain continues for as long as they can stretch it out, but the final kidney donation in the chain comes back to the originating hospital. So instead of saving one life, you can be a catalyst to saving many!

Some questions I got answered:

What kind of timeline are we looking at?
If the rest of my tests go well, it is sent to committee. They look over all the information and decide together if I am a good candidate. At that point, we can pick a date. Mila said there are two dates available in November and two in December. I am hoping for early December, as that works best with work/family/vacation schedules.

Surgery is done on a Wednesday, at UNM. They transport the kidneys (complete with GPS tracking), not the patients. Usually, the donor goes home on Friday.

In one week, you come back in for a follow-up visit, then they see you periodically over the next two years. You are out of work for 4-6 weeks, although the last donor they had was back at work after two.

Will I know anything about the recipient?

If the donor and the recipient both agree, information can be exchanged, otherwise no. (I will be giving my consent, but I understand if they don't want to.)

Can I still donate blood? I am scheduled to later in October.

Probably should skip it this time around, but I should be able to in the future.

And some stats I got through googling and through my visit:

- At any given time, there are over 100,000 people waiting for a kidney transplant. That's 100,000 people who will DIE if they don't get what most of us have an 'extra' of. Imagine you are standing on a boat holding two life jackets, and the guy on the boat next to you has none - and his boat is sinking. Are you really going to stand there and clutch your extra life jacket while he drowns?
- 20 of those people die every day.
- Almost as many people become too sick while they are waiting to qualify for a transplant.
- To donate you need to be 18 and healthy. I am not too old at all - in fact I am in the median age group!
- One kidney functions the same as two. You don't pee any more than you did before. You can still play sports, still get pregnant, etc. Not that I plan to do either of those two, but it may be of interest to other people!
- Kidneys from living donors last much longer than those from cadavers (deceased donors) - approximately twice as long. Many recipients go through the emotional and physical stress of one transplant, only to have to face another a decade later - at which point the transplant may be less likely to succeed.

***Phew! After some questionable results from the local lab (which also said I was pregnant and completely messed up my name), I am cleared to go! My surgery is scheduled for December 19, which will give them plenty of time to get a chain organized. That coincides nicely with the start of Christmas break for the kids, which is also a break from programming at the library, so good timing all around!


I am going to be posting updates along the way, but please please know it is not for any sort of pat on the back. I am doing this because it is something I want to do. What I am hoping is that someone somewhere will become familiar with the process, and think maybe they want to do it too. Could that someone be you??
Posted by Ami at 1:30 AM