The other day - the day after Valentine's Day, as a matter of fact - I was in another city, driving home through all sorts of construction. In between all the orange barrels and cones and heavy equipment, I spotted something red: A heart-shaped balloon, attached to something wedged down in the mud. 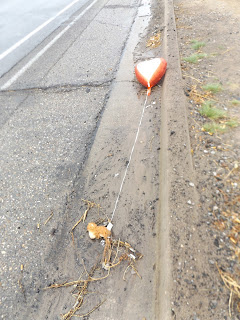 Being in a hurry, and surrounded by busy traffic, of course I pulled over and ran back down the curb to investigate. 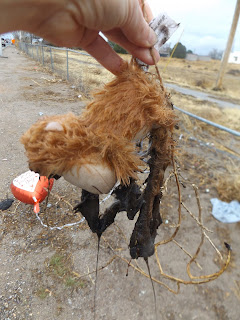 Poor guy was obviously not having a happy post-Valentine's Day, so I offered him a lift. I deposited him carefully in my trash can, and we slipped through Border Patrol without any uncomfortable questions (I don't actually know his nationality, and I wasn't about to go through his pockets for ID until he had had a bath. Fortunately, they didn't ask.)

I picked up the kids on the way home, and by the time we pulled into the driveway, we knew his name (Magical Mystical Monkey) and the short version of how he came to be stuck where I found him. He got a quick rinse in the sink, then, divested of the escape balloon (more on that later), a real bath in the washing machine.

Once dry he quickly made friends with last summer's refugee, who seems to be staying on permanently. 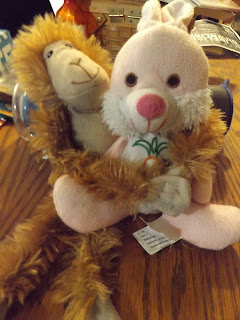 Clean and comfortable, he was finally able to tell us more of his story (certain parts are still top secret!)

"First you should know, I am a spy. But don't tell anybody. I was trying to help my girlfriend. She is a spy too. There's this human baby. She was wandering around spying on the baby. Another baby came up behind her while she was spying on the baby and that baby GRABBED her!

After the baby grabbed her, she had a walkie talkie and she called me. I came to help, but it was too late. She was gone! So I went looking for her. I found her and the baby saw me with her, and she just wanted my girlfriend so she grabbed me and threw me out the window.

After that I saw a balloon floating by, so I grabbed onto it but it was running out of helium, and I got stuck in the sinking sand. Then the Jones Family came and rescued me from the sinking sand!"

I just hope she doesn't catch sight of that last picture...things may not go well when they meet up again!