No, I didn't drop off the face of the earth - I just started summer reading! This is NOT a time of year when librarians have time for such frivolous pursuits as blogging, laundry, sleeping, or eating. I did want to share a few of our story times with you, however, so here is this week's.

Like many libraries across the US, we are using the theme of "Build a Better World". This week we were building with boxes, and getting our imaginations warmed up for the weeks ahead. I used the same theme and roughly the same books for all ages this time around:

A lift-the-flap book, which means it won't survive on the shelves for very long. Great for audience interaction, though, and the kids' responses were both perfect and varied.

A board book, yes, but Patricelli's humor spans many ages. I introduced it by asking the parents in the room, "Have you ever asked each other, 'why do we even buy presents when all the want to play with is -'" and of course they all answered, "the box!" There happens to be a puppy inside this box, but the box itself is treated as the gift, which is pure awesomeness.

One of my FAVORITES growing up - although now I'd be with Christina's mother, in raptures over the new refrigerator. Yep, I'm officially old! Not so old that I don't still feel the urge to hit up the appliance store trash bin, though...

For the older kids, I added this one, after a short discussion of the phrases "thinking outside the box" and "putting someone in a box." 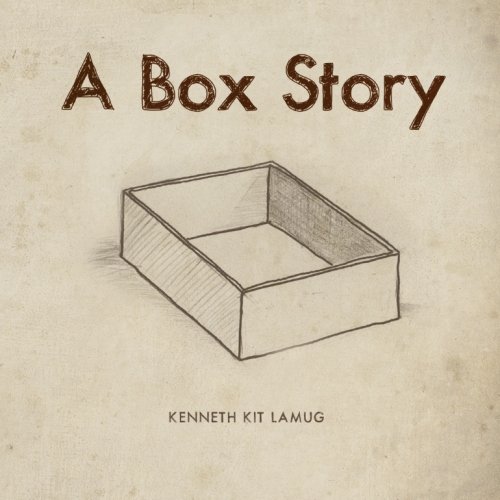 A little more abstract, it delves (briefly) into boxes as places of safety or confinement, mysteries or magic.

In between books, we looked at mystery boxes I had made up with riddles about what was inside. Some were super easy ("You wear me on your head and I rhyme with cat."), to medium ("You have to break me in order to use me"), to one that stumped the super-smart older kids ("I can be stinky when I am alive, but I smell good when I am dead.")*

For our craft, of course, we needed to make something with a box. We will be doing something with big boxes later in the summer (pleasedon'trainpleasedon'train), so we used little boxes this week. My wonderful patrons and friends have been saving me their cereal and pasta boxes for weeks! Another staff member helped me wrap them all in plain paper, and I set them out with markers, glue, scissors, and scrap paper.

After stories, I pointed out how empty our stage area was, and told them I needed their help building a 'world'. We talked about what buildings might be in a town, and I let them loose from there. It was funny, one group became obsessed with hotels, while another was very animal-conscious. Some chose to keep their finished product, but there were more than enough for a multi-layer village by the end of the week: 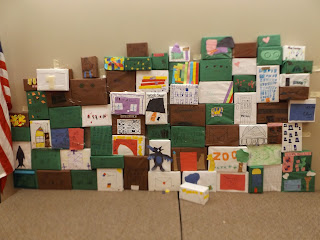 Hindsight: If I had left the tops open, I could have reached in and stapled each one to the wall, easy peasy. Instead, this is the result of a LOT of tape, both packing and masking, some staples, and one total collapse. I think it is secure now. Except for that white one on top, which is flipped over. Sigh.

Here are some close-ups: 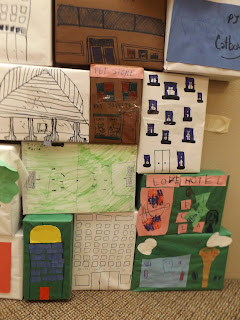 Fun start to our summer! They all came up with such different, detailed ideas - I can't wait to see what they do next!