Will YOU Survive the Zombie Apocalypse?

That's the question I asked a few hundred middle schoolers today. I got to visit my old home, Mountain View Middle School, for their annual Health Fair. Now, if you can remember back to your middle school days, the idea of a health fair doesn't exactly inspire excitement in your average 7th grader (although getting out of class is always nice). So, each organization that comes tries a different tactic to get the kids' attention for a few minutes.

Giveaways, particularly candy, are always good, but many kids will just grab and go. My friend Maureen always has hula hoops, and they stay pretty busy with kids trying to best each other. Mike from the Space Hall had a mini operation center with realistic open torso, where kids could try to tie a knot with surgical instruments. The guys from HAFB always bring local critters in formaldehyde, plus their pet boa constrictor, which is TOTALLY cheating because it's not as if those are native (but yes I did go take it out and play with it before the kids came in).

Since the Library is all about feeding your brains, of COURSE we go with zombies! As kids (or adults) approach, I ask them how they think they would do in the zombie apocalypse. Answers range from a straightforward, "I would die. Quickly." to "Aw, man, I'd kill those zombies, I play Call of Duty ALL the time."

The latter group gets me mentally rubbing my hands together and laughing my evil laugh. First, I tell them, you have to make sure you will SURVIVE the first few days. You'll never get to shoot zombies if you do something dumb right off the bat. Let's see how you do on this quiz, shall we? 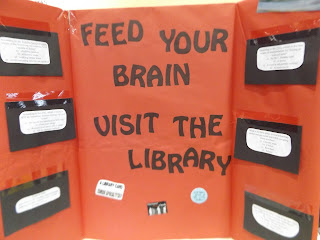 I had six questions from the Zombie Survival Guide, with answers on the flip side. 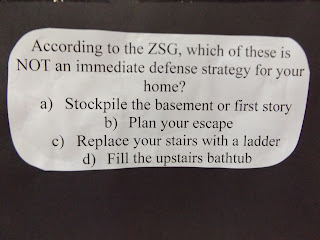 I picked ones that I thought would be good for discussion, and they were! It was fun listening to kids debate with their friends, and then discussing the 'whys' of each answer (do you know which of the above is correct?)*

If they missed a bunch, I handed them a list of some of our zombie books, so they can come and brush up a bit!

Then they could move on to firing practice. 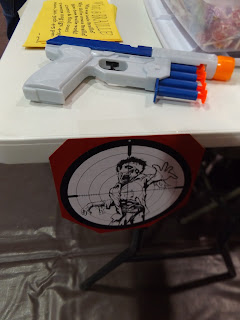 Yes, I brought a gun to a middle school. And handed it to adolescent boys. It only shoots about two feet, though, and the bullets kept bending sideways, so I felt pretty safe. Especially after some of them looked down the barrel of the gun to see if it was loaded. "DUDE! You're not going to survive the week that way, let alone the apocalypse!"

Overall, sixth grade boys and girls did evenly well. At seventh grade, girls became more thoughtful, while boys started showboating. By eighth grade, the girls were travelling in smaller groups, generally avoiding the boys, who...well...let's just say many of them will need some guidance during the zombie apocalypse. Some strong guidance. And for a few, possibly, a shock collar.

Of course, I also passed out candies ("Smarties or a Dum-Dum?") and flyers for upcoming events ("Did I mention we will have FOOD?"). I also got to network with a few of the other groups there, setting up some possible Summer Reading partnerships, and visit with teachers who stuck around a lot longer than I did. Thanks for having me, MVMS, it's a great way to spend a work day!

* A is the one you should NOT do. Zombies go down, so people need to go up. Stashing all your supplies in the basement would not seem like a good idea for very long.