Playdate Picnic at the Library

Why is starting something new so nerve-wracking? Even when you have done it before? The regular preschool program routine of stories and crafts is familiar and comfortable, but everything gets a bit stale after a while. One of the things I hear often from parents is that they bring their kids to story time so they can be around other kids. For some kids (and parents), sitting together on the rug or at the craft table is enough to form bff relationships, but others need a little more purposeful but relaxed interaction.

With that in mind, I took a portion of our old lapsit programs, stole a program name from another library, and this week launched a monthly Playdate Picnic. Generally speaking, parents bring an early lunch or snack for themselves and their kids, and I put out some sort of semi-educational creative play items, and we just see what happens.

Since we are starting in October, dress-ups were a natural first choice! They are also not something I am lacking at home, so I carefully washed everything we had on hand, and added a few items from the dollar store. 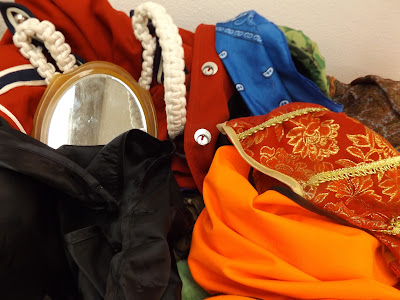 No pictures of the program, because I was too busy having fun, but both days went well! Wednesday's group was a little more gregarious than Monday's - it's funny how you get a different mix each time. Monday's kids were more interested in using ME as a dress-up doll, which was unexpected but loads of fun! One little girl had the most infectious laugh, which she would launch into every time they added a costume piece to my head.

I made snacks to share, which helped break the ice - pumpkin bread on Monday and pumpkin cookies on Wednesday, because - October! I put them up on a table away from the costumes, with ingredients posted, so parents could steer their kids away without drama if necessary.

We had hand mirrors to look at ourselves in. I wish I had funds (and space) for a big, sturdy stand-alone mirror! One hand mirror hit the ground hard and broke Wednesday, but no injuries. It was one of those more-plastic-than-glass types, and I was able to get right there and clean up all the pieces.

I also brought in some board books that featured clothing. That helped on Monday with some of the shyer kids - they squatted down next to me and we looked at the pictures together. With some of the babies I put semi-sheer scarves over my face and tried to get them to pull them off.

All in all a success, I think, and a couple parents thanked me for having it. Next month our theme will be building - duplos, mega-blox, and some newly donated Lincoln Logs!