If You Give a Librarian a Barbie...

...she probably won't leave it alone. Because librarians can't leave anything alone. And when you add teens into the mix...

Our plan for this month's Teen Cafe was a sort of "Frankentoys" program, where we would take pieces of old toys and put them together in bizarre but creative ways. Remember the rotten neighbor kid in Toy Story? We solicited broken toys, but all we received were old Barbies, so - we switched it over to a Zombie Barbie program!

Preparation is pretty cheap and easy, once you have a collection of dolls and clothing. I mixed up some brown goop to soak the clothes in (coffee, coffee grounds, and cocoa mix. Everyone now smells like mocha lattes, yum!) 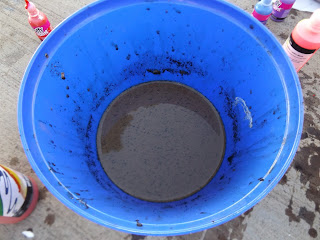 The coffee grounds added a nice, gritty texture, especially when it got smeared in the hair.

I spent $3.80 on a spray can of grey primer, and gave the dolls the opposite of a spray-on tan. 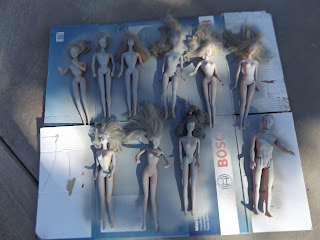 It only took a few minutes to dry out in the sun, and I gathered the other materials between sides, so I was ready to go in less than half an hour.

There were no instructions from there, just experimenting. I used wadded paper and white paint to sort of soften the plain grey, then spattered some red all over. 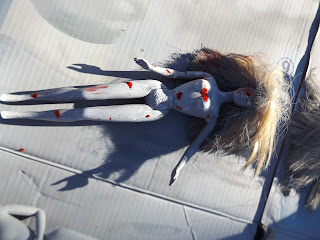 I had whited out the eyes, and later added a single black dot. When I was spattering blood it covered one eye, which I didn't want, but when I tried to wipe it off it made a nice garish smear, so it was all good.

Add some blood to the clothing, still drying from the goop: 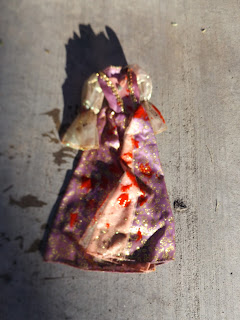 And here we have our lovely ladies - one who didn't quite make it home from Prom, and one who got up in her jammies to see what that noise was outside... 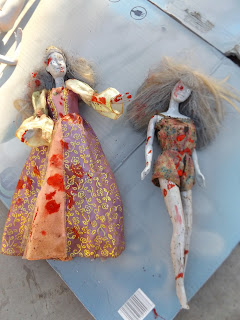 I didn't have permission to photograph the teens, but they had their own techniques: 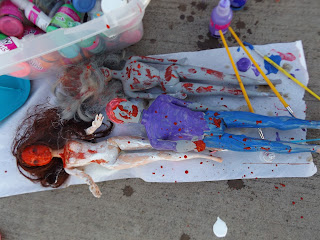 Spattered blood being the predominate theme. Clothing was deemed extraneous.

A fun and easy project - not for everyone, but perfect for your teens who want an art project they probably won't get to do at school!