Minor Kitchen Remodel on a Budget

Even when you are on a tight budget, there comes a point where 'serviceable' turns into 'get this out of my house'. We live in an older double wide manufactured home, and the original cabinets have seen better days. Scrubbing has worn the finish away so they just look permanently grimy, the pink (pink!) formica counter tops are chipped, handles won't tighten any more, doors won't hang straight any more, etc. And, did I mention the counter tops were pink? 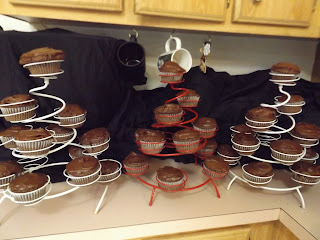 The real tipping point was when we realized there was black mold in the cabinet under the sink. Once we ripped that whole cabinet out, we realized the mold was in the wall, so as home improvements usually do, it became a slightly more involved operation involving replacement of walls and insulation. In the end, though, I had a MUCH bigger sink, a dishwasher, pretty brown counter top (on that side of the kitchen, anyway), and space for a tea cart I bought for $5 at a yard sale.

We planned to do the opposite side of the kitchen relatively soon, but...then there were new tires, transmission issues, a grand baby moving in, etc. And two years went by. We finally decided we better get on it before they discontinued that particular counter top. It turned out that one store had actually stopped carrying it, so I'm glad we didn't wait much longer!

As usual, I forgot to take "before" pictures until I had started the demo... 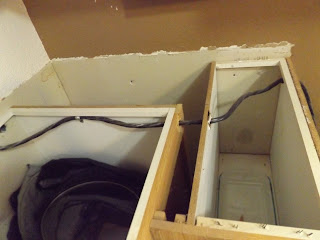 Oh, look, an electrical cord running through things. And a lot of wasted space. Not to mention having to reach in and dig when I wanted something in that blind corner. 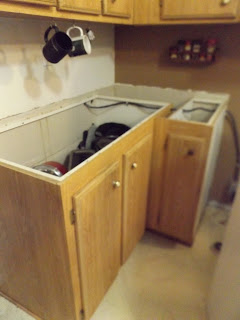 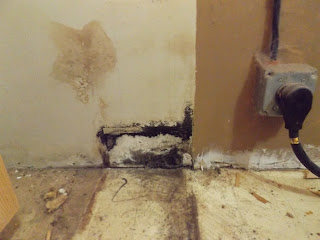 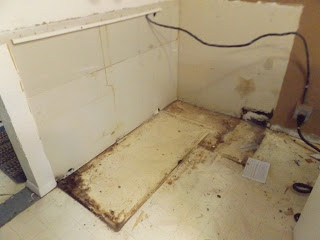 So, wall replaced, retextured, and repainted, and we hit the Memorial Day sales - 20% off unfinished cabinets! 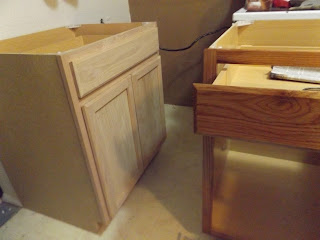 There is actually more available cabinet space with it NOT going around the corner. I had planned on a lazy Susan, but the outside edges would have made it take up way too much space.

Now, we were just going to do this corner for now, because: budget. There was another wall with a pantry and refrigerator, and of course because the pantry was built to fit, none of the replacements were the same size, no matter how we configured it, so we thought we might have to have something custom made some day. Then Mike started a sentence with "What if..."

Don't you love when people do that just when you think you are almost done?

In this case, however, it was a pretty brilliant "what if". See the washing machine just on the other side of the doorway? We took out a set of plastic shelves between it and the dryer, slid it down, and put the refrigerator there - giving us an entire 6 foot wall of space to play with!

That made room for a 24" pantry, a 30" cabinet, and a space between for the trash can (which had previously just been floating around the kitchen). I was planning on using the same type of counter top, but Mike decided I was having too much of the fun, and I think he missed doing some of the finer carpentry work he used to enjoy. So, this part is NOT in the budget.... 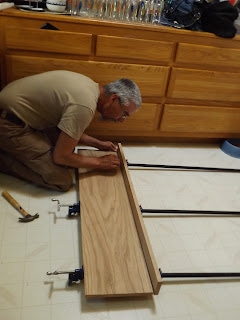 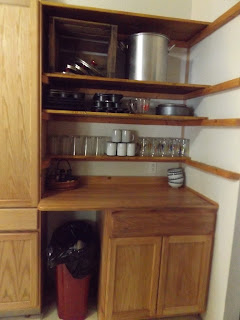 ...but isn't it purdy?! I won't actually cut anything on it. In fact, I won't do anything on it. It's like having your first brand new car - that first scratch is heartbreaking! I'll just balance a cutting board over the sink for a while longer...

The shelves are to the exact height I wanted, and I plan to add cup hooks to the exposed supports.

That left the exposed side of the pantry looking a bit bare. I needed something 18" wide, a couple feet high, and preferably with a drawer...

...voila! Another $5 yard sale find. The original finish was that 1960's orangey-brown stain that's so thick it looks like paint. A LOT of sandpaper and elbow grease later...

The end panels were a pain in the you-know-what to attach, so I painted this side with chalkboard paint instead. 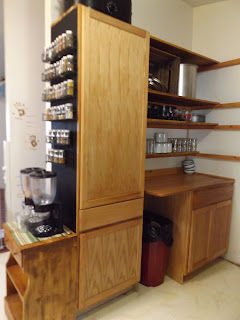 The spice racks and jars were another splurge, but I paid for them by selling some of the small appliances I decided I didn't really need as I was rearranging (why did I have two pressure canners??) 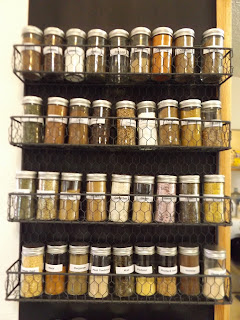 I like the rustic look of the racks, and the uniform glass bottles make my OCD side soooooo happy!

The total cost for everything except the oak counter top was about $700. That looks like a huge chunk of money to me, but when compared with those 'budget' remodels in magazines that come in with a couple more digits, I feel a lot better about it!

And none of it is pink:)