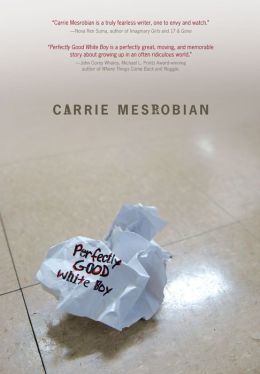 I received this review copy from Lerner some time before the Cybils nominations began, and had already started reading it when it popped up on the Young Adult list. I have since finished it, and am not at all surprised that it made the list, but it has taken me a while to process it and decide what I want to say about it.

I'll start with, I liked it - a lot! (Whew, I'm sure Ms. Mesrobian was worried for a minute). This is definitely a character-driven novel, happening entirely in the thought processes and emotions of the main character. We do get to know other characters, as Sean gets to know them, but it's the peek into Sean's psyche that pulled me in.

"You never know where we'll end up. There's so much possibility in life, you know?" Hallie said. Sean Norwhalt can read between the lines. He knows Hallie's just dumped him. He was a perfectly good summer boyfriend, but now she's off to college, and he's still got another year to go. Her pep talk about futures and "possibilities" isn't exactly comforting. Sean's pretty sure he's seen his future and its "possibilities," and they all look DISPOSABLE. Like the rental his family moved into when his dad left. Like all the unwanted filthy old clothes he stuffs into the rag baler at his thrift-store job. Like everything good he's ever known. The only hopeful possibilities in Sean's life are the Marine Corps, where no one expected he'd go, and Neecie Albertson, whom he never expected to care about.

Just in case you are expecting this to be about his experiences in the Marines (I was), it's not - the book ends with him leaving for boot camp. It is a whole lot of things I was NOT expecting, which may be why I have been finding it hard to articulate my review. I was not expecting to feel so in tune with the thoughts and mindsets of someone who is so completely different from who I am in real life, and that can only be the result of some amazing writing skills. While I have never met Carrie Mesrobian, a quick scan of her Twitter patter tells me that, a) She bears little resemblance to Sean herself, and b) She is freaking hilarious.

Tights? Socks? Boots? Cardigans? These are all essential questions when one is speaking to librarians, yall. @catagator

Did you know there's a thing called Manhole Renewal Services? Drove by a truck fully engaged in such. *waits for jokes to pour in*

"Please attach your curriculum vitae..." *curls up into pillbug form, hides under desk*
Oh, and this one:

Okay, yes, there is a LOT of sex - and quite a bit of swearing - in Perfectly good White Boy - so, probably not a book you want to hand to your father. Even if you wrote it. Just an FYI for your reader's advisory needs. BUT, if we are going to pretend that teenage boys don't think about sex pretty much all the time - well, we probably shouldn't be trying to do reader's advisory to teens to begin with.

Honesty is definitely the key word, here. Everything about Sean's relationships, feelings, decisions, mistakes - everything is gut-wrenchingly honest, and I will not be surprised to see this on the Cybils short list come january 1. The only thing that might keep it off is that there are a few places where I was sure I had missed a few pages - things jump in time with little to no explanation, and that may be jarring for some readers. It's not a huge thing in the scope of the novel, but I know how tight the race is for those short list spots!

No gifting suggestions to go with this one, but it would be a great gift all alone for any young adult in your life, male or female. I also expect to see it picked up and devoured by many older adults in the near future! (Picturing some "I don't normally like to read, but this book..." conversations).