So I had absolutely no intentions of being up past 9 on New Year's Eve, but the kids begged, and I hate to keep saying "no" to things that really don't cost money or add additional animals to the house, so...

I made a quick list of New Year traditions in other countries, and after picking the kids up at Zoo Camp we went through it over lunch at McDonald's (courtesy of gift cards from big sister, so even that was free!) We discarded anything that involved breaking dishes or getting wet, made a quick run through Walmart for supplies, and we were set.

One of my traditions is to start the year with a clean(ish) house. It so happens that Sheridan's science fair project this year requires 6 floors starting off very clean at the exact same time. She helped me with those, and we called it good! 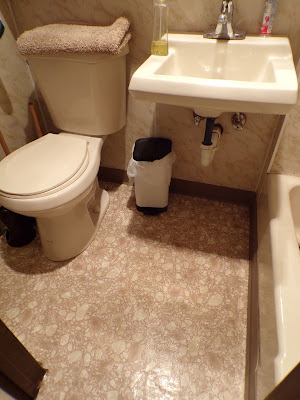 After supper everyone brought blankets to the living room and we watched "Fantastic Beasts: Crimes of Grindlewald" (one of their Christmas gifts). 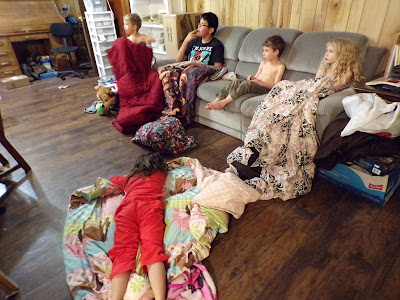 It started out like this, but by the end of the movie more blankets and pillows had been added, and it was wall to wall bedding and kids.

So, a Greek tradition is to hang onions from your door. They appear to make pretty ristras with them, but I lacked the motivation, so we just poked a hole in the mesh bag they came in. 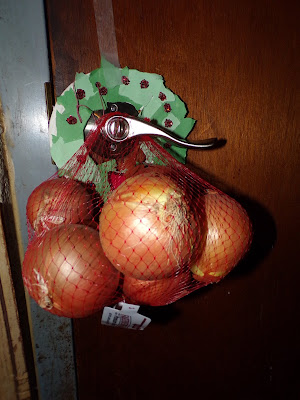 In the morning you get to tap an onion on each child's head to wake them. How hard you tap depends on how late they made you stay up the night before.

Not being sure how late they would actually stay awake, we spread out several things you are supposed to do right at midnight. In Russia you are supposed to write a wish for the New Year on paper, burn it in a champagne glass, and then drink champagne out of it. Gross, plus small children with fire. We modified to toss our wishes into the fireplace, 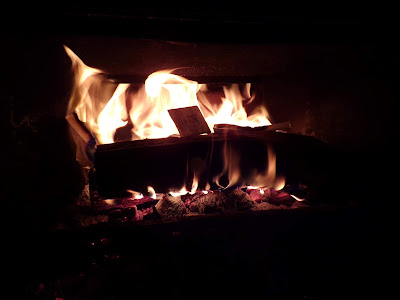 then drank our Shirley Temples. 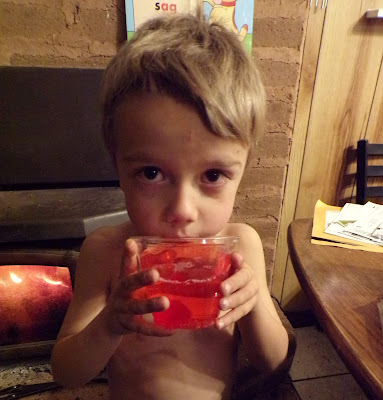 Wit hthe movie over, we moved on to our never ending game of Alamogordo-opoly. 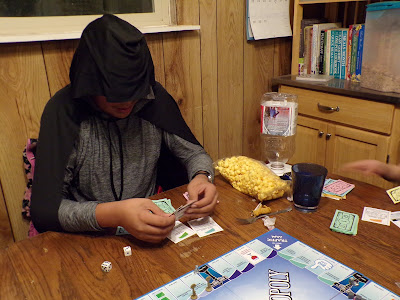 Which I am apparently playing with Nazgul. 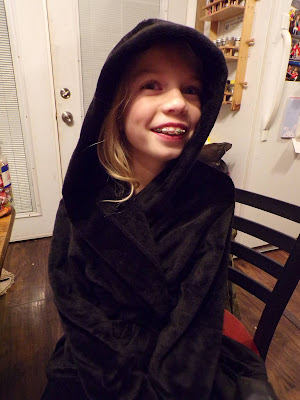 In Turkey, you sprinkle salt on the doorstep, 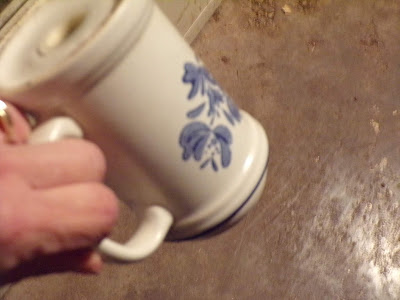 and in Japan you ring a bell 108 times. (We did it quietly inside - you are welcome, neighbors.) 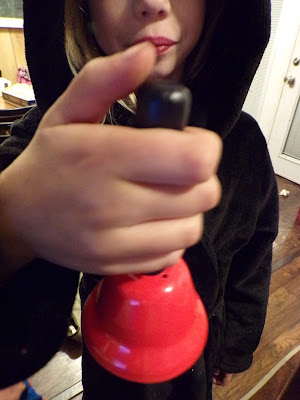 In Spain you eat 12 grapes. 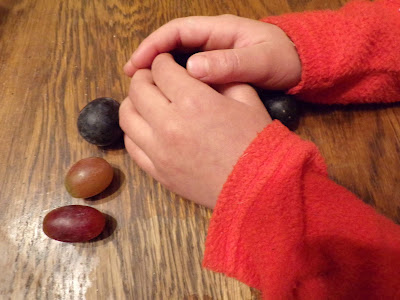 Not all at once, Grace!

End the year as you mean to continue the next one: 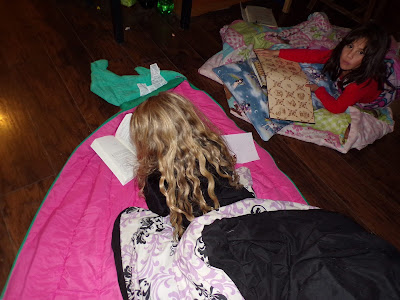 Then jump into the New Year (Denmark), landing on your right foot (Facebook memes). 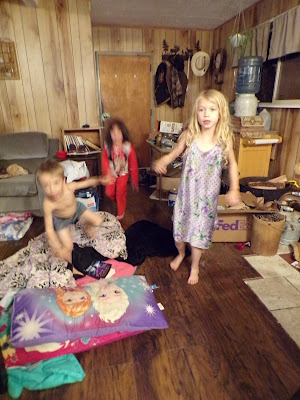 They actually made it until midnight! All but Daddy, who went to bed after 10, and Logan, who went upstairs at 11:45 telling me to come get him at midnight - and who was sound asleep ten minutes later. I told the others they could sleep in the living room as long as I didn't have to come downstairs and kill anyone. They actually settled in pretty quickly!

And at 6:30 Shane bounced right out of bed (or sleeping bag) and started going a million miles an hour as usual. 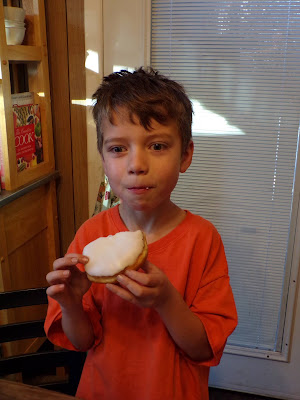 and we couldn't find marzipan pigs (Austria), so we ate bacon. We were supposed to communicate with the animals (Romania) yesterday, but we tried this morning instead. 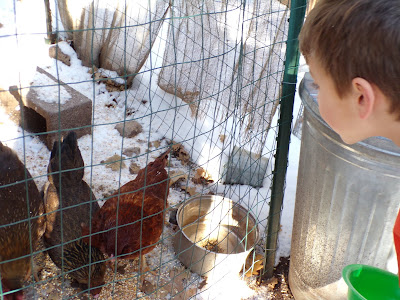 Food is their love language, I'll say it worked.

We tapped bread against the wall to drive away evil spirits (Ireland), but Sheridan was disappointed to find her little brother was still here. 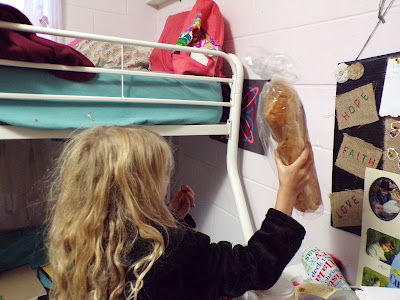 In Estonia you need to eat at least 7 times New Year's Day, so then we ate the bread with honey butter (left over from Shane's cowboy party). 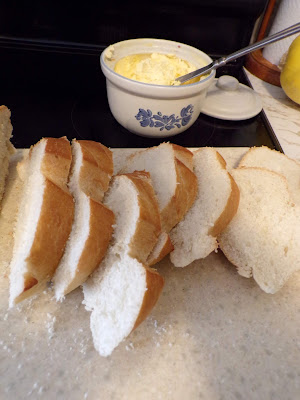 If I was a good Armenian mother, I would make the bread myself, kneading wishes for the new year into it.

I didn't do that.

I did join the kids on a walk around the block with an empty suitcase (Colombia). 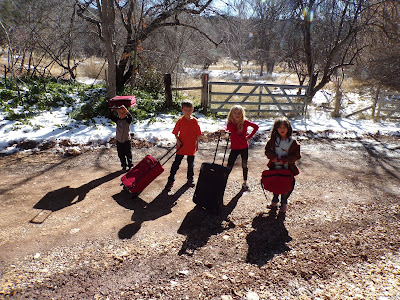 That was actually supposed to happen yesterday, but whatever. I told the one neighbor outside that I was trying to run away, but the kids kept following.

In the Philippines you eat round foods, so we snacked on oranges. 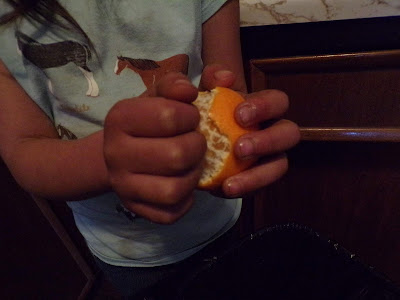 and Sheridan made cheesy meatballs. 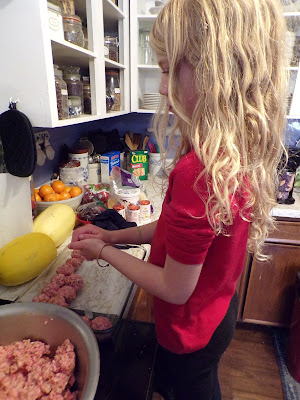 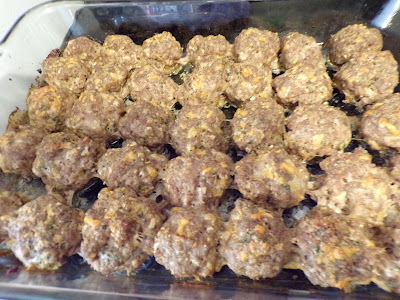 Of course, in the southern US, you have to eat your black-eyed peas. I prefer mine mashed up, though, with a LOT of cheese, sour cream, and salsa! The Pioneer Woman's recipe, found here, is so yummy I make it other times as well. You can switch up the salsa type or jalapenos - sometimes I use my jalapeno jam instead, this year I used some salsa verde.

We are all making goals for the year. Some we are still working on, but two of mine are to read together more, and to teach the kids to cook more. I know people who do things like employee evaluations are fairly rabid about "measurable outcomes", but I know if I say something like "Each child will cook one dish per week throughout the year," I am setting us all up for failure and discouragement. "More?" I can do more. One time counts as more. Success!

However you chose to celebrate, I hope 2020 is your best year so yet!