It has been YEARS since we have gone on any sort of family vacation - YEARS. Time work and funds and a million other things just keep getting in the way. We were long overdue, so when my niece Meghan announced her wedding would be on a three day weekend, we decided to make it five days, and pull the kids out of school for a couple.

But we didn't tell them! They tend to fret and over plan and drive us crazy, so we waited - and told them they would just be staying with Grandma. That let me pack a suitcase with their clothes, without suspicion. We even told them she was taking them someplace special, so they would need one nice outfit each!

The night before the trip, when I picked them up after school, I told them Grace was going to have a sleepover at Grandma's, since it was her turn. She was thrilled! For numerous reasons (which are not anyone else's business - especially if they have never experienced fasd - but which I promise were in her best interest) we decided Grace would stay at Grandma's and not miss school. She had a BLAST and got spoiled rotten.

Over dinner, we told the kids they would actually be coming with us.

Sheridan cried. She wanted to go to school and Grandma's. Sigh.

I ran them through baths and showers, and got the car packed up. Space was pretty tight, so I told them they could each pick one book and one toy to bring. The next thing I knew, Sheridan had two bags packed plus a baby doll and all her paraphernalia, including a car seat! I ordered her to pare it down, and thought she had, until we were pulling out and I glanced back at her seat. 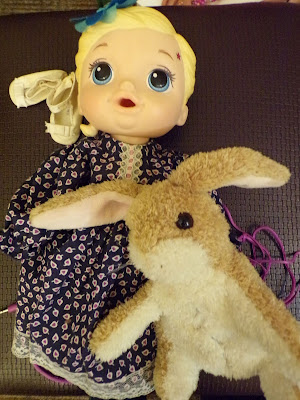 hjeridan explained that the bunny was baby Judith's toy for the trip. Has anyone else read Betty Bunny Wants Everything? That was her nickname for the longest time...

Started with card game of things to find along the way...and then there was this.

Sheridan has become a diva who won't pee on a tree. Even if we offer her a whole forest!

Lunch at Casey's in Hobbs. Okay burgers and fries, great chicken strips. Massive Coca-Cola collection for such a small space. No credit or debit cards, though! That took much of the cash I had brought.

The fog had cleared by then, but it stayed 37 degrees, drizzly and windy everywhere we went. Before the trip I prepped these shoe holders to hang on the backs of the seats: 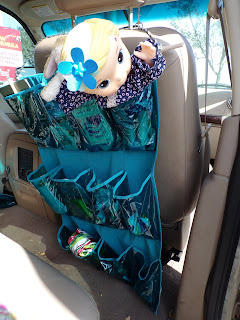 I didn't take a pictures at the start, but there was a wrapped surprise in each pocket, and for every hour they went without bickering, they got to open one. Playing cards, activity books, chocolate eggs with toys inside, and those sticky guys that flip down the wall - perfect for car windows! Every hour seemed to be perfect, and then they had things to bring into the hotel room.

We reached Abilene around 5PM our time - the kids got a kick out of going an hour into the future! What can I say, we don't get out much.

We had planned on an Italian place for lunch, but ended up at Golden Corral because we knew where that was, and we had had enough with Google directions. Better food than the one we used to have in our town, very sweet waitress. Since everyone was a different degree of hungry after travelling (and snacking) all day, it worked out well.

We stayed at Comfort Suites. The gentleman at front desk was very nice, room was comfy and clean. We couldn't even hear noises from outside, and we were right on the highway.


Got on wifi to catch up on messages. There was a video from the mom of one of my young patrons at the library, complaining that he KNOWS I don't live at the library, but that I am still supposed to BE THERE.

We tried to turn in fairly early, thinking everyone would be wiped out. Not so much.
Out of the darkness:
"Mommy?"
"Yeeeeees?"
"Can rubber catch on fire?"
"Go. to. sleep."