Ellie and I wanted to do something really fun for the kick-off to our first full year of Navigators, so we came up with The Navigators Games - think The Hunger Games, but with less death. And less romance. And less overthrowing of the government (which, in this case, would be Ellie and me, so: none of that, thank-you).

Of course, the only weekend we had available was Labor Day weekend AND the first day of hunting season, so camp sites were a little crowded. Thanks to a certain marvelous husband we had a great spot reserved a few days ahead of time.

Once everyone had arrived, we split the kids into groups to learn some basic survival skills. I had campfire basics which just happened to be one of our Campcraft badge requirements! We learned how to choose a spot, clear flammables, dig a pit, and line it with rocks (as well as why we needed to do all of that!) 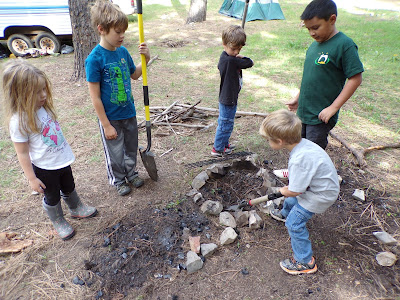 We then talked about they types of fuel we would need (tinder, kindling, fuel), the three things a fire needs to 'live' (food, air, heat), and I showed them three types of campfires (tipi, lean-to and log cabin.) I don't know about you, but three is pretty much all I can remember of anything! Finally, we talked about how to kill a fire, by taking away each of the three things it needs to lives.


With Miss Tara, the kids learned first aid - everything from snake bites to broken bones.

They even got to use a pocket wire saw to cut wood for splints! 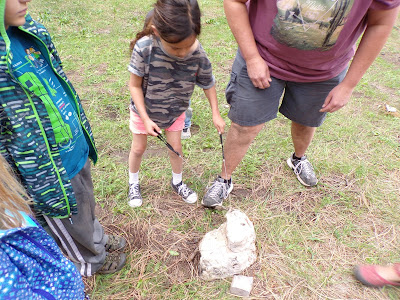 It was super cool and handy. I need one of those for my purse, now.

With Miss Ellie they played a game to practice the points of the compass and following cardinal directions (badge skill!) 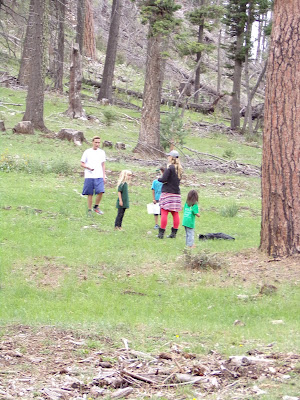 Mr. Mike gave them a crash course in search and rescue - both what to do when you are lost yourself, and what to do when someone in your group is lost (another badge skill!)

Last year for our communication badge we made up a secret code, so we spent a rainy bit writing each other messages. Can you tell what Cailan wrote? 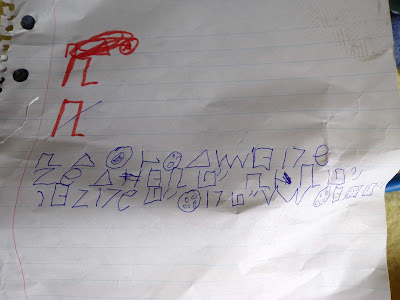 We broke for lunch then, and boy was that an adventure - Miss Ellie brought MREs! The kids had an absolute blast poring through the contents and activating the heating elements. Personally, I think I ate cat food with jalapenos in it, but it was a hoot watching the kids swap things around and get so excited about what they found!

Speaking of adventures...no point in learning all these skills if we can't put them to use, right? Some time after lunch we did a head count, and realized Gracie was missing! (Grandma was also missing, but nobody seemed to notice that right off).

We reviewed what we had learned about search and rescue, picked buddies, decided on a likely direction (with a little prodding from adults with inside knowledge), and set off in a semi-straight line.

After quite a hike, we finally found our missing camper!

Oh dear, she appeared to be injured! Good thing we had all those first aid skills! 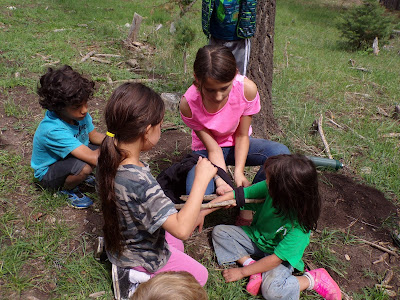 Sage fashioned a beautiful splint with some sticks and Christopher's jacket.

Our new puppy, Trouble, gave her lots of puppy kisses, too! 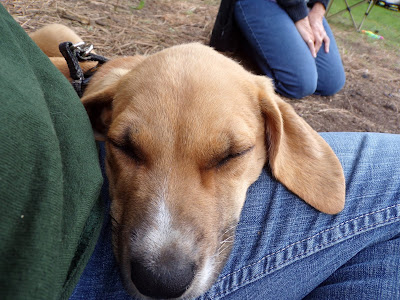 That was a long hike for little legs, whether you had two or four, so we all took a break to explore and play on our own.


Did we mention it was also the first day of elk season? 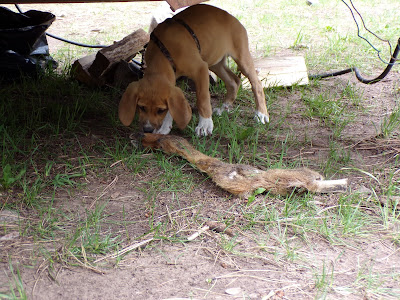 No, we didn't let her keep it. 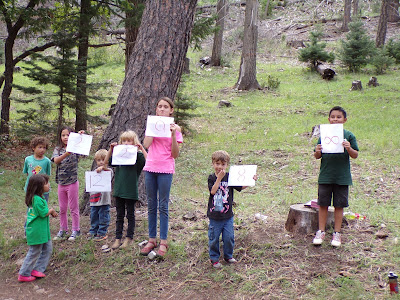 Others occupied themselves with setting up camp and organizing the food. 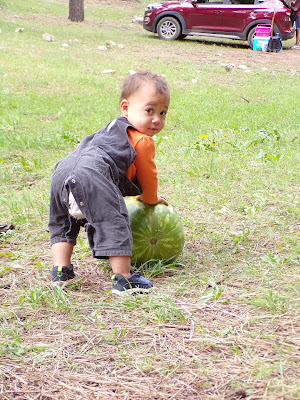 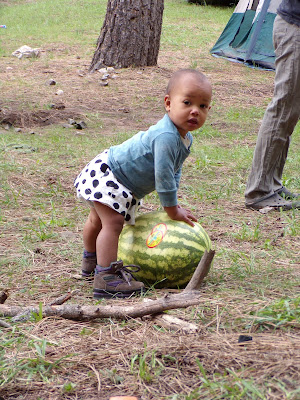 Once everyone had had a chance to rest, we moved on to our campfire challenge. Each group had to use what they learned in the morning to choose a spot and build a campfire together, with no adult help. 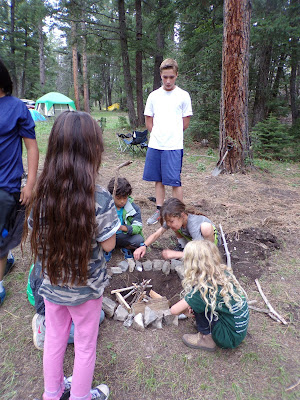 This group had a rough start - somehow they lost members, added a member who had missed the initial instruction (but who has built fires before), and they kept running into problems with soil and equipment. It was very frustrating! 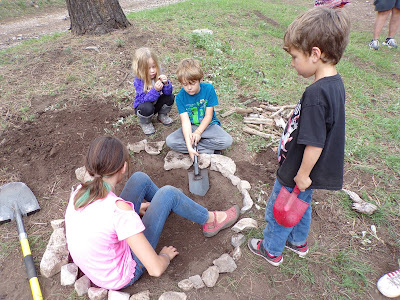 They took a deep breath and regrouped, however, and even took the time to make theirs heart-shaped! 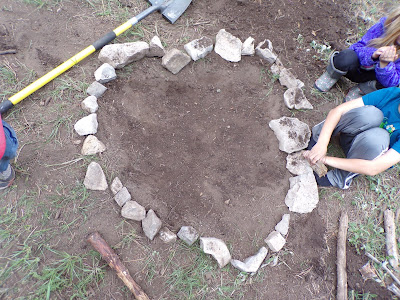 They even opted to go with the log cabin formation, which I have never actually tried myself. 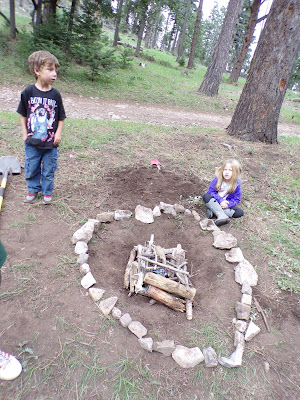 The other group got theirs done quickly, opting for the lean-to formation. Then they kept fiddling with it while they waited, so we had to chase them off until we were ready to test them out - by lighting them, of course! 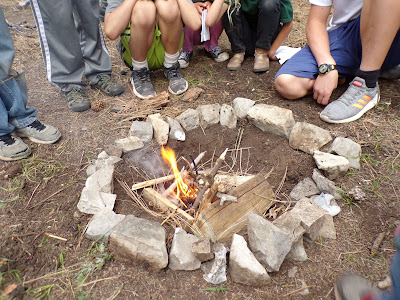 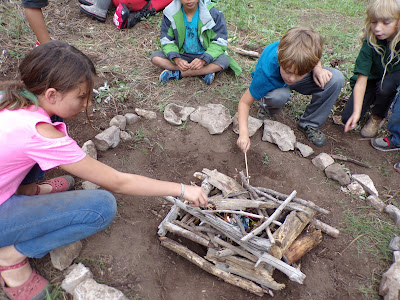 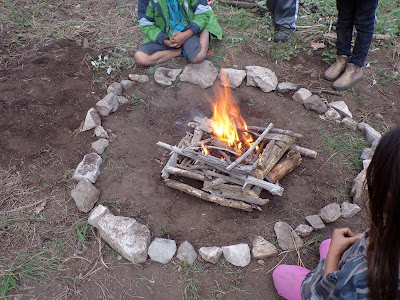 In fact, it didn't take any coaxing, and was quickly up to cooking heat! I may have to use this one from now on.


I was super proud of them all!! The teamwork and tenacity were superb! They were excited to cook their own supper over fires they built themselves.

Marshmallows can be tricky.

Lanterns made with battery-powered tea lights made perfect night lights.

And then it got too dark for pictures! 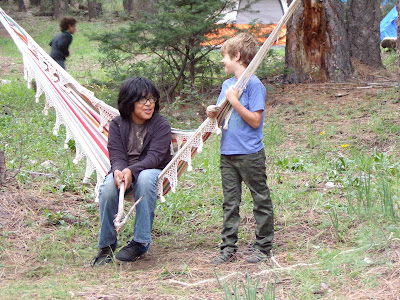 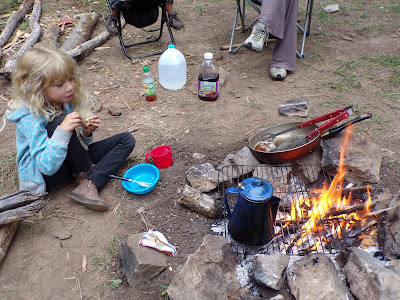 We had a hand washing station, but I'm not sure it saw much use. 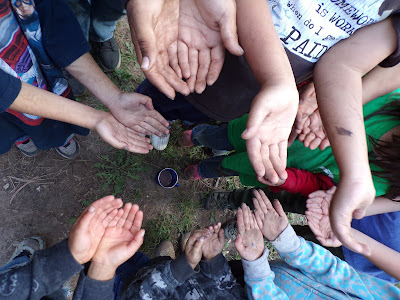 Definitely a slow, easy start to the day. 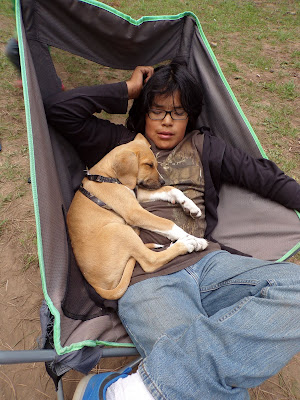 We decided to work in two more badge requirements: naming parts of the tent, then pitching one and taking it down again without adult help. 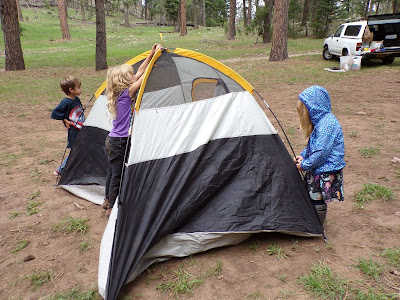 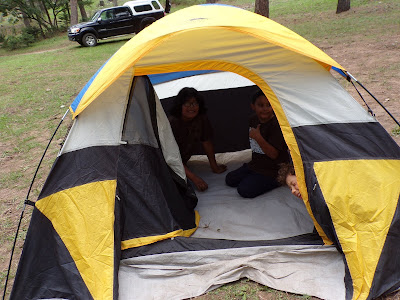 Super start to the year and a great weekend adventure! Huge props to my partner Ellie for all the energy and knowledge she brings to these things, and to all the parents who jumped in wherever they were needed! 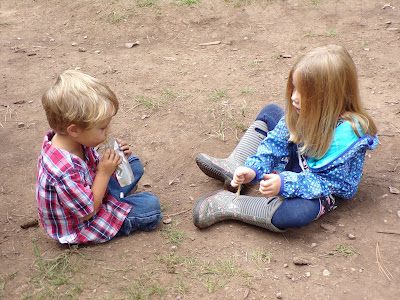